It was in December 1999 when I first met an enthusiastic journalist in Bangalore named Vinay Jalla. I was working in a dot com as a photo-journalist focusing on travel and culture features, while Vinay handled the sports desk as well covered interviews of leading personalities in city. That he is well-read person was quite clear to everyone who dealt with him. There is a saying, “Every journalist has a novel inside him”. That dictum fitted aptly with Vinay!

Being an ardent fan of great Indian novelist R K Narayan, he used to quote characters and instances from the author’s books. Listening to his everyday travails which he presented in a comical manner, we had nicknamed him “Malgudi Chaami”! I remember the day the renowned author died, Vinay wanted to rush to Chennai to pay his last respect. However, we consoled him saying that the cremation would already be done by the time he reaches there. Soon after I left the company during the dot com bust days, and I got to know that Vinay had left for the UK. Recently, after a decade, I contacted him when I got to know that Vinay had published a novel, ‘Warp and Weft’.

When I read Vinay Jalla’s debut novel ‘Warp and Weft’, I could clearly feel the influence of his guru, R K Narayan. The story is set in a fictitious village called Zarivaram in Andhra Pradesh. Set in pre-Independence India, the story translates the rich South Indian culture, customs and traditions of that period in a lively manner. The novel delves into the intrinsic art of weaving handloom saris and about the lives of people connected to it. 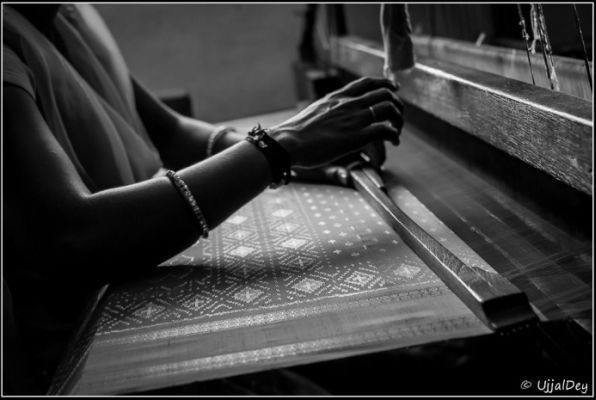 Zarivaram reminded me of a small town I lived near Chitradurga district on the borders of Karnataka and Andhra Pradesh. The characters found in Zarivaram are reminiscent of the people I have met. Narayana, the poor protagonist, drunkard Venkataiah, wretched housewives Nagalamma and Gowramma, Konda Kothi the toddy tapper, Kallu Thalli the toddy goddess, Ram Das the village zamindar all have the rustic earthy charm to them! When I asked Vinay how did he come about writing such a novel, he narrated the travails.

“I started writing ‘Warp and Weft’ way back in 2001. Thanks to my grandmother who gave me sufficient material through her anecdotes about her life in the village of Dharmavaram, I concocted a fictitious landscape in my mind and wrote the novel. Even as a child I was fascinated to listen to my grandma’s wonderful tales and bedtime stories. Her stories instilled moral values and have shaped my point of view in life. 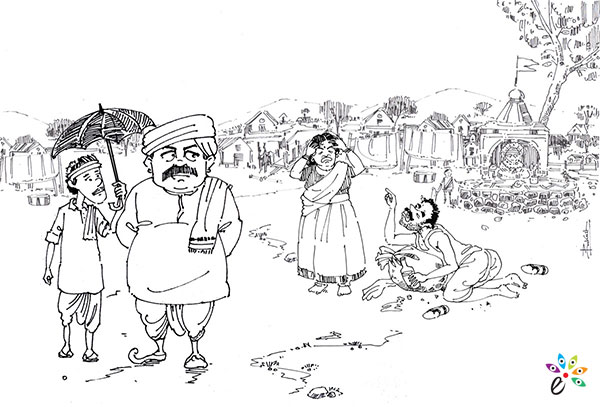 Being an ardent fan of the R K Narayan and his Malgudi, I decided to set my novel in a fictitious place. Inspired by Vikram Seth’s “A Suitable Boy” (one of the longest novels ever published in the English language), I aspired to write a long novel. To concentrate on writing the novel, I made a dubious decision and quit my job as a journalist working for a popular web portal in Bangalore. 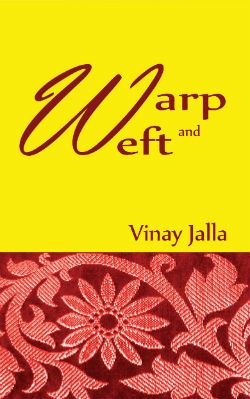 I would sit in the city’s Central Library and write about 1,000 words a day on one-sided sheets of paper. Writing a novel can sometimes become a lonely experience – it’s just the writer and his characters for company. Some days I would saunter across to the nearby British Library for a change of scene or sit on the grass in Cubbon Park and write, while the pigeons flew around cheerfully.

After seven long months I managed to pen about 250,000 words but had to chop more than half of it as I felt I was wandering beyond the scope of the central character – Narayana. After editing and proofing, I was left with 100,000 words. Now that I had completed writing my novel, I was really confident that it would get published by a big publisher. And no, I wasn’t thinking about a million-dollar advance. Instead, I used up all my savings to fly to the UK to get the novel published!

I came to the UK in the cold winter of 2001. My novel received an even colder reception – it was widely ignored by publishers. After endless rejections and divorcing a couple of literary agents on the way, I decided to approach Amazon last year to self-publish my book. Thankfully the novel is out now for everyone to read about an unwritten region of India”.

Buy Warp and Weft from Flipkart.com