The winter brings in the chill and the draught. But it also brings with it a host of the flight beauties who travel from far and wide. Escaping the low temperatures of their home, these birds travel the distance in search of warmer zones. The winters are when flocks of birds migrate across borders in search of warmer and cozier habitats.

India due to the wonderfully spread out, diverse landscapes and weather conditions, is a huge hub for migratory birds that make it home for a few months. A large number of various migratory birds perch within its territory as bird watchers head towards birding destinations, armed with binoculars and a skip in their step.

Here is taking a look at some of the bird watching destinations that can be visited during the winters to catch sight of the beautiful and mesmerizing migratory beauties.

The brackish waters of the popular Chilka Lake is one of the largest assembling areas for migratory birds. Around 92 different migratory bird species are found here during the winters. Some of the birds that you can expect to find at the lake are Pintail Duck, Pochard Duck, flamingoes, raptors, waders and more. The Nalabana Island, Kalupadaghat Islands and Mangalajodi Islands are great bird sighting areas within the lake.

Often called a ‘bird paradise’, the Keoladeo Ghana National Park was known as the Bharatpur Bird Sanctuary. Located in Rajasthan the national park becomes home to thousands of migratory birds during the winters. Some of the birds found here are herons, different species of ducks, storks, pelicans, cranes and more.

The Nal Sarovar Bird Sanctuary is the largest wetland sanctuary in Gujarat. It has more than 200 migratory birds during the winters. He birds stay around until March-April. Some of the birds at the Nal Sarovar Sanctuary are pelicans, Brahminy ducks, grebes, moorhen, flamingoes, herons etc. 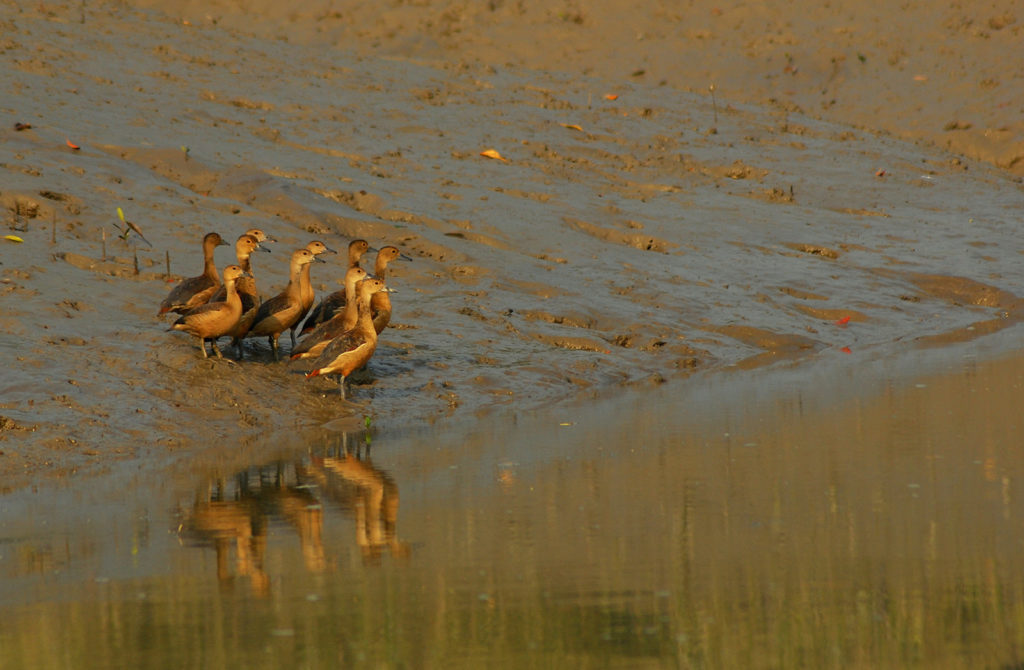 The Sunderbans are known for its tiger and other wildlife, but it is chirping haven too during the winters. With around 250 species of migratory birds finding shelter at the Sunderban National Park, it is a definite wildlife hotspot. The birds seen here are cormorants, pintail, curlew, storks, herons, poachard and more.

Located on the banks of the Vembanad Lake in Kerala, the Kumarakom Bird Sanctuary abounds in beauty. The Siberian crane, wagtails, flycatchers, cormorants, herons, egrets etc.

6. Rann of Kutch and the Desert National Park

The Rann of Kutch in Gujarat is abuzz with a thriving avian wildlife. During the winter season the Kutch area is graced by the presence of cranes, flamingoes, short-eared owls etc. Similarly, the Desert National Park in Rajasthan is a paradise for migratory birds due to its desert climate. Falcons, buzzards, harriers are some of the migratory birds found in the Desert National Park.

Cutting across the state borders of Andhra Pradesh and Tamil Nadu, the Puicat Lake is fraught with flamingoes, storks, pelican, herons and egrets during the winters. Also seen are shorebirds, spoonbills, warblers and flycatchers.

Recently popularized, the Eaglenest Sanctuary in Arunachal Pradesh is home to the varied species of the Himalayan region. With more than 400 bird species this beautifully lush sanctuary is a birding heaven.

One of the oldest national parks of the country, the Jim Corbett National Park has more than 500 bird species, some of which are migratory and some local. Some of the migratory birds spotted here are forktails, Brown dipper, species of wagtail, wallcreepers and more.

The Ranganathittu Sanctuary in Karnataka is along the Kavery River. Migratory birds, such as species of storks, plover, river tern, egrets, patridges, herons and swallows are seen here.

Step out this winter to catch sight of the flapping wings, vivid colors and beady eyes of exotic birds that migrate from across lands and seas. They won’t be around for too long!

Top Monsoon Destinations in India to Get Nostalgic in Rain