A Quick Getaway to Chokhi Dhani 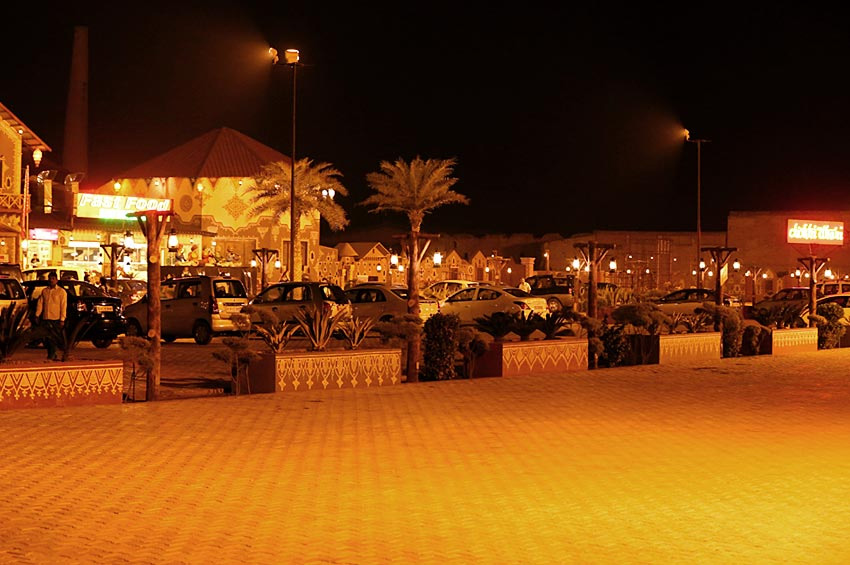 It was a New Year’s Day morning, when my friends and I left the grime of Delhi to escape into peace and solitude. Chokhi Dhani was our destination.

We stopped only once on the way because without morning tea, the journey would have been impossible. We chose Hotel Highway King! It was a place where only the word ‘highway’ made sense. But thankfully they gave us the caffeine that we needed.

Research had revealed that it would be around 260 km from Delhi. But the lady who speaks her mind once Google Map is switched on had other plans in store for us. She decided to lead us onto a village road that was dusty and bumpy. But when you are with friends, even that turns out be the cause of a lot of laughter.  After a car trek through the obstacles, when we finally reached the five star ethnic village resort, it sure brought out a lot of deep gasps from us. 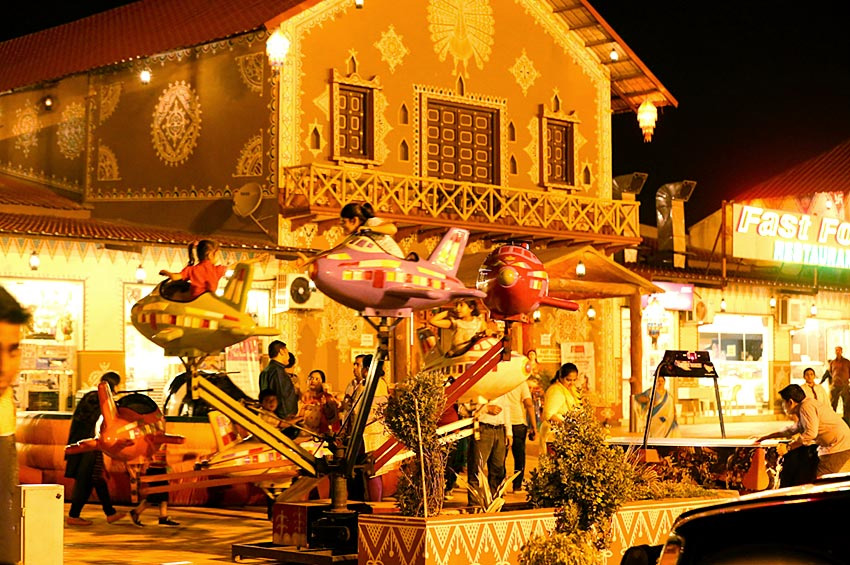 Kotri or the lobby of the resort is where we first entered. While some were busy filling in the check-in details or getting rooms, a few others headed to the washroom. But my eyes were busy taking in the beautiful effect that the bamboo net ceiling, the carved furniture, the artifacts, and the Rajasthani paintings on the mud-plastered walls had created. Truly a luxurious way to glimpse the ethnic richness of the state.

It was nearing lunch by the time we had finally settled into the rooms and had freshened up.  The ‘mice in my stomach’ had started to run amuck by then. Even though in my heart of hearts I wanted to experience the sit-down-on-the-ground-to-eat Rajasthani food, I knew that would have to wait till later in the evening when the fair started. So, for now I had to be satisfied with some continental food at the air-conditioned restaurant – Bindola. 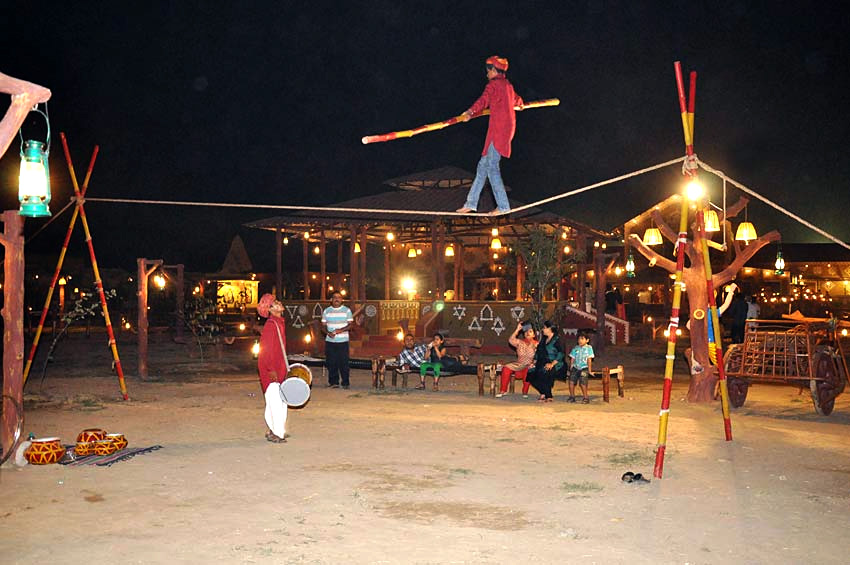 Afternoon siesta is what I hate missing.  And on a cold winter afternoon, the temptation is higher. Especially when the Kund, or the swimming pool, lay bereft of any water. And the body felt more sleepy than tired so I chose shut-eye over a pampering massage at the spa.

Not wanting to miss out on walking around the property and exploring all the nooks and crevices of it, I set my alarm for an hour-long sleep. After my evening tea, I was ready with my camera and a self-serviced tour of the resort. What I found were many swings, figurines, cackling geese near a small pond, a couple of rickety tree houses that I dared to climb, a camel cart with a camel that had brought in some supplies for the resort, a bar whose ceilings were studded with thousands of mirrors, and a recreation room that had, amongst other things, a nice bean bag to laze in. I didn’t have time for that though. The evening fair was about to start. I could hear faint noises of drumbeats. It was time to hit the village fair that the Chokhi Dhani resort is known for. 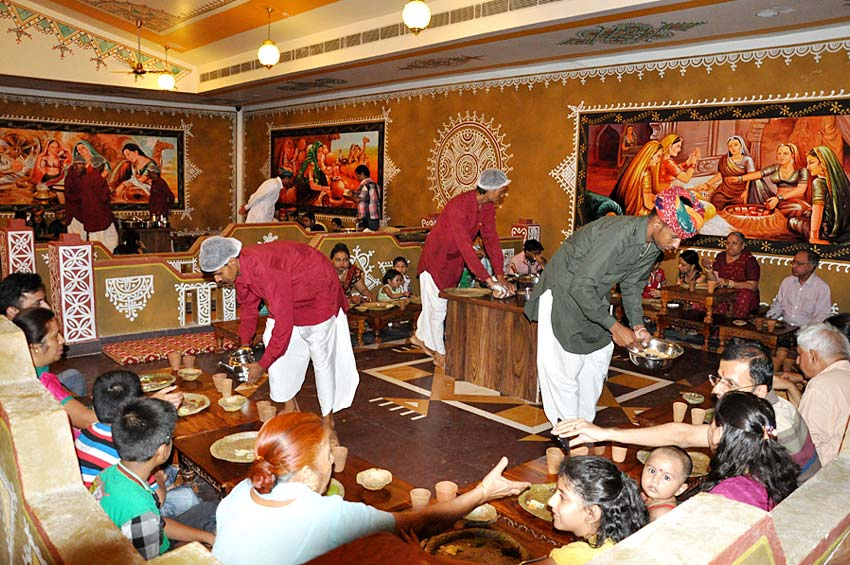 I followed the pathway that one of the hotel officials had instructed me to follow and entered an area that was a Mad Hatter’s party! Pity that other than me, only one friend decided to accompany me. The rest wanted to laze around in the room.  But it was their miss.

Jostling through the crowd I found myself in front of a magician, clad in traditional Rajasthani outfit, enjoying taking out pigeons from under a basket as the crowd merrily cheered on. I joined in. It was time to let my hair down. Then followed the innumerable stages where ladies in brightly coloured clothes were performing various dances of the state. Some of the names I had learnt during projects that I had made for my daughter’s school. The rest remained unnamed. But that didn’t matter. What mattered was getting up with them and shaking a leg. Shyness got the better of me. This is one reason I will go back there again, someday. The dance still remains to be done. 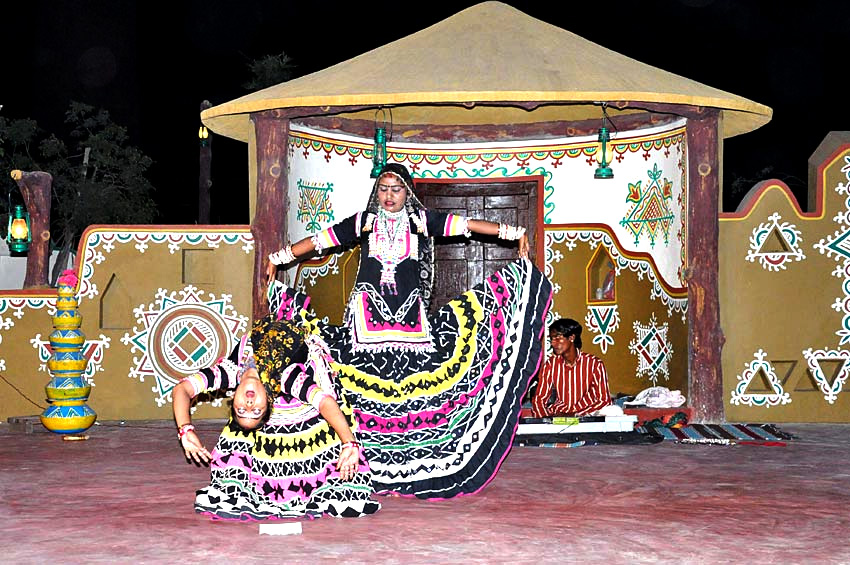 Seeing a long queue of people heading towards the room where they were serving traditional food, my hunger struck again – more out of impulse than necessity. But soon my friend and I found ourselves following the queue into the ‘magical room’ and gorging on some of the tastiest dishes that I have eaten in a long time.

With a satiated stomach, we continued the partying for half an hour. The others had also come in by then. And soon we found ourselves hopping onto camel rides, bullock cart rides, elephant rides, sliding down enormous slides, shopping for curios and souvenirs at the shops, trying our hand at the potter’s wheel and clapping along with a bunch of kids at the puppet show. 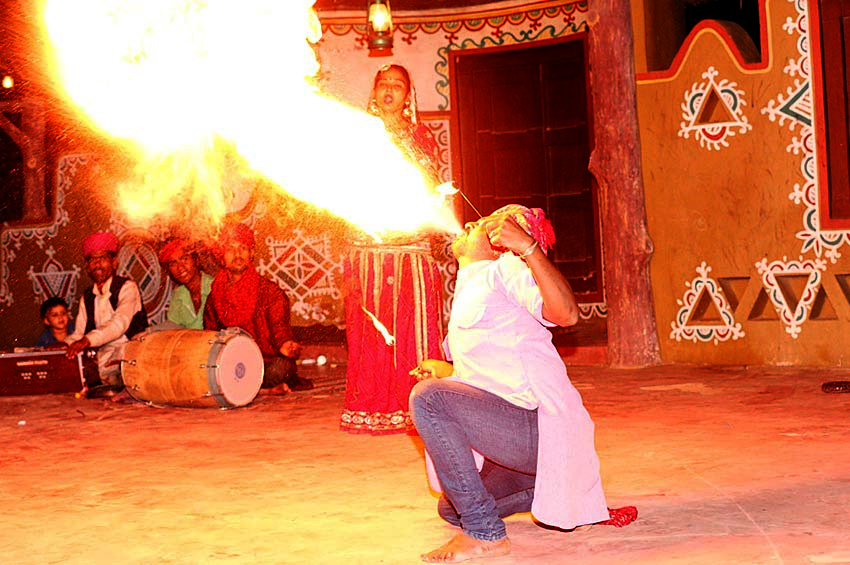 When one is having fun, time just passes by. The same happened with us too. Midnight came sooner than it had come for Cinderella. Yes, we didn’t have to run before our clothes turned into rags but the body wanted some rest. The next morning would be another drive. This time back to the grind of daily life. But that’s a given because without the routine, a holiday would never be as much fun.