An Encounter with a Tusker 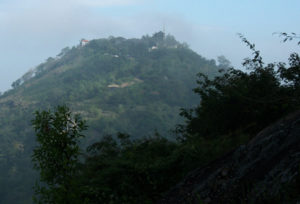 The Biligiri Rangaswamy Hills (BR Hills) is renowned for its wildlife diversity and forest management by the Soliga tribe. Just recently, the government has notified this unique wildlife sanctuary as a tiger reserve with huge implications on the life of the Soligas. Giridhar Malla our in-house wildlife researcher remembers his visits to the place and his wild encounters. BR Hills wildlife sanctuary is a spectacular continuous stretch of dense jungles connecting the Western Ghats to the Eastern Ghats. Due to this unique feature, this forest preserves some of the rarest species with features from both the biospheres. It is also one of the best habitats for the endangered Indian tiger and Asiatic elephant populations. BR Hills got its name from the temple of Lord Rangaswamy situated on top of a white cliff (‘Bili giri’ means white hill in local language).

As a part of Project Tiger, I was assigned to conduct a census of the tiger population in BR Hills sanctuary. I began my journey on bus from the BR Hills temple bus stop early in the morning to reach a place named K Gudi (Kyathadevara Gudi, South Karnataka is infamous for places with abbreviated names!) situated inside the sanctuary. The bus was the only transportation facility available there apart from the government field vehicles. The route to K. Gudi was really a pleasant experience since the bus meanders through dense forest tracts. If we are lucky, there is a good chance to spot rare birds and wild animals. I was fortunate enough to watch wild dogs, gaur and wild boars. 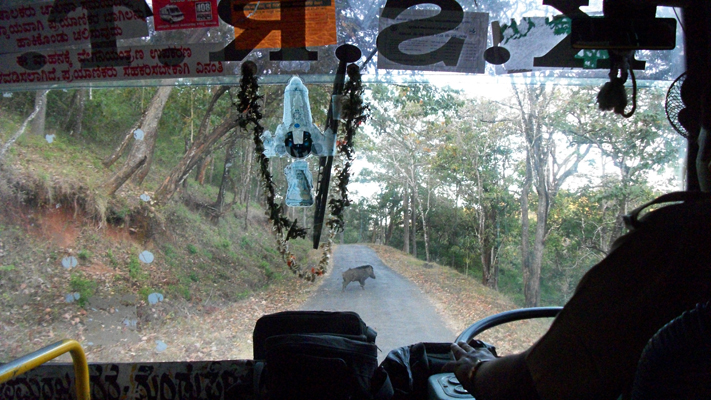 As the bus passed through the dense forest tract, I watched barking deer (Muntjacs) feeding on the grass along the road side. As it was early morning, the jungle was filled with melodious twitter of birds, which echoed through the forest canopy. As it was winter, the bus trudged along the winding route, piercing through the thick blanket of mist. Beside me, there was a Soliga tribal, who had covered himself in a thick blanket only allowing space for his eyes. As, I was new to the place, he repeatedly stared at me, hiding his eagerness to enquire about me.

A jolt due to sudden braking of the bus, diverted his attention towards some mighty obstruction that stopped the vehicle. All the passengers stood up and looked anxiously at which is partially visible, through the mist. As it began to come near, the bus driver reversed the vehicle and to our surprise, it was full grown tusker elephant. Tuskers are quite dangerous due to their mood swings and there are many incidents of tuskers killing people in this region. Even the Soliga tribes are afraid them.

Some passengers on the front seats began to yell at the bus driver to reverse the vehicle faster, but the driver was helpless. Since it was a steep mountain, a slight mistake would send the bus tumbling down the valley. The wild elephant had turned rogue and run straight to collide the bus with full speed. Then it suddenly stopped hitting from the front and turned around to hit the bus from the left side. It was exactly where I and Soliga tribal were sitting. We both rushed to the other side of the bus. Taking this opportunity, the bus driver sped away without any hesitation. If the elephant had nudged the bus over the cliff, we would have plunged down on the steep mountain edge. 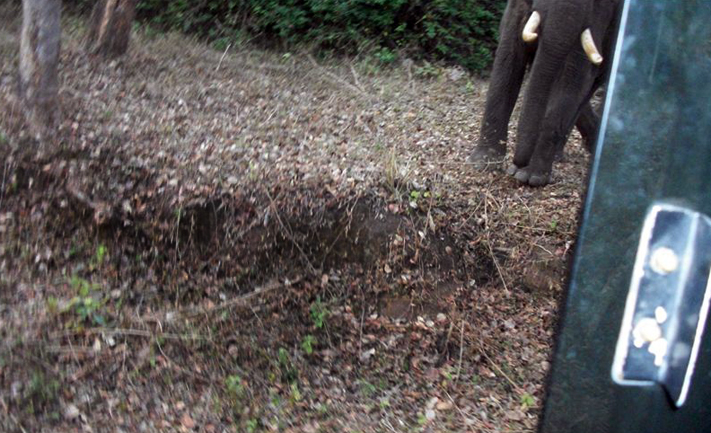 Tusker attack on the bus

Moments later, everyone smiled and breathed freely, relieved from the tense situation. I could only manage to capture only one picture in that tense situation. Everyone in the bus, grabbed my camera to look eagerly at the picture. They exclaimed loudly in their language, which I couldn’t understand. Years later, this incident is still fresh in my mind, where for the first time I looked eye to eye with a rogue wild tusker.

Wild elephants are not always dangerous, rather they are known for their gentle behaviour, their memory and their strong family bonding. But due to forest land destruction and fragmentation, elephants are losing their habitats. Long ago, large herds of elephants where known to migrate across the Indian landscape. Today due to rapid urbanization and population explosion, elephants are confined to small forest tracts. Wild Asiatic elephant population need large continuous stretch of forest lands for their food and water. There is a drastic need to conserve the forest land so these wild animals can thrive.