What flavour of honey would you prefer… orange, eucalyptus, mango, or coffee! No, you don’t need to fantasise to have flavoured honey of your preference. You just have to travel a bit.

Coorg or Kodagu fascinates anyone who prefers the woods and the rain, and wants to escape the crowds. This tiny district in Karnataka has the maximum number of Athithi homestays in India. On the road from Bangalore to Madikeri, (the district capital of Coorg) via Mysore, the moment you cross Kushalnagar and begin the climb up the hills, you will get a hint of what to expect ahead. If you travel during the coffee flowering season in spring, the valley will be bedecked in a sea of white blossoms. The scent can be intoxicating when you enter a coffee estate!

Coorg is the leading producer of coffee in the country. It is strange that one district alone does nearly 50-60% of coffee production for the entire country. In fact, the other district, Chickmagalur which can seriously compete is also in Karnataka! More about Indian coffee later.

Meanwhile, coffee addicts obsessed with this legal drug will be pleased to know that honey from Coorg is coffee flavoured. Honey is produced by bees that collect their honey from the pollen of flowering coffee plants. Regular honey is a blend of many different honeys. These days, gourmet shops and even supermarkets are offering ‘monofloral honeys’. In fact a Coorgi entrepreneur Chayaa Nanjappa has launched a dedicated brand of flavoured honey named ‘Nectar Fresh‘ offering a variety of flavours such as clover, ajjwain, lychee and acacia honeys! 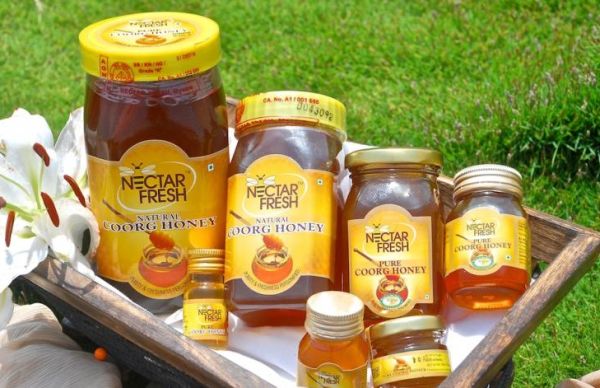 This type of honey is called ‘Monofloral honey’, meaning collected from one single source of flower. The coffee doesn’t taste like coffee, but it does have a distinctive taste that is absolutely delicious. The idea is that honey from a hive positioned in the middle of, say, an orange grove will taste like — well, not orange, but certainly different from honey made by bees in an coffee estate. Coffee honey is termed by experts as “mild tasted, dark medium amber coloured, spicy, almost peppery, but unassertive — neither sweet nor rich”. 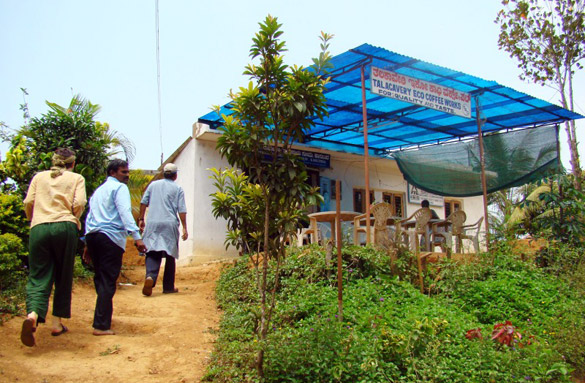 It is interesting to know there is a place in Coorg named ‘Honey Valley’, which was once the hub of honey production. In fact, Coorg is one of the leading producers of honey in India. This year, the Coorg Honey & Wax Producers’ Cooperative Society produced 60,000 kg of honey. In fact, during its hey day in the 1990s, the society produced 100,000 kg of honey! But the ‘Thai sac brood’ disease played havoc some years ago, affecting honey production in the district.

Apart from honey, Coorg is renowned for its diverse variety of wines and squashes as well. Ginger wine, Betelnut wine, Pomegranate squash, Kokum juice, etc the variety is gourmet’s delight. While on our way to Bhagamandala, we saw a shop named “Talacauvery Eco-coffee Works” and we stopped by for refreshments. It is run by a women’s self help group of Kargunda. We bought freshly made coffee, coorg honey, a bottle of betelnut wine. 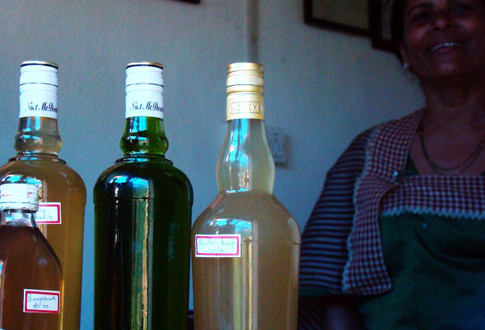 It is surprising to note that honey in coorg is always packaged in recycled bottles of liquor. Why… you do not have to ponder a lot. Kodavas are fun loving people who take too many for the road. So the Mcdowell’s is reborn as a brand of honey! Hey, did you know that what do humans and honey bees have in common… not the boring community oriented society and division of labour. It is the affinity to alcohol. Researchers have found that honeybees are the only animals who are not affected by drinking pure alcohol. Read this link to believe it!

Elsewhere – Namdhari Fresh and other gourmet outlets in Bangalore, Mysore

Honey availability – throughout the year