Exploring the Spiritual Sides of Puducherry and Tiruvannamalai

My recent trip to Tamil Nadu happened quite by chance. I had always kept Auroville for the day when I was finally going to be sold on vipassana. I had planned to live for a few good months, growing, eating, cleaning, and nurturing- all that the place gave me a glimpse of in three days, enough for longing to return again.

It quite happened by chance, when a friend and I decided a spiritual journey to the South. 5 days of meditation at Auroville and Thriuvanthamalai – both with their unique spirituality! Along with meditation, it was a cultural experience- with the historical French culture in Auroville and the very religious culture of the South India.

After reaching Chennai by flight, we took a cab to our destination. Cab’s are the preferred common commute, however one can take a bus as well. Although Puducherry is just seven kilometers from Tamil Nadu, there is a clear distinction between the two. Puducherry is a little more cleaner, neater, greener, richer than Tamil Nadu. Towards the end of Puducherry, the buildings start appearing a little more French, and bookstores carry more advanced French than English.

Pondicherry has the ashram of Sri Aurobindo, it is here that he meditated with The Mother and his samadhi is here. Planning to meditate by the Samadhi to enlighten our spiritual journey, we were allowed in as regular visitors. Although the ashram has a large number of daily visitors, the place maintains silence and so meditation is quite possible. Both, tourists and mediators visit here to find silence or peace. The verandah surrounding the samadhi is the meditating area. Clean, green, with little bits of sunshine through tall palm and papaya trees, it is a place to ‘check out of the world’ for a little while. 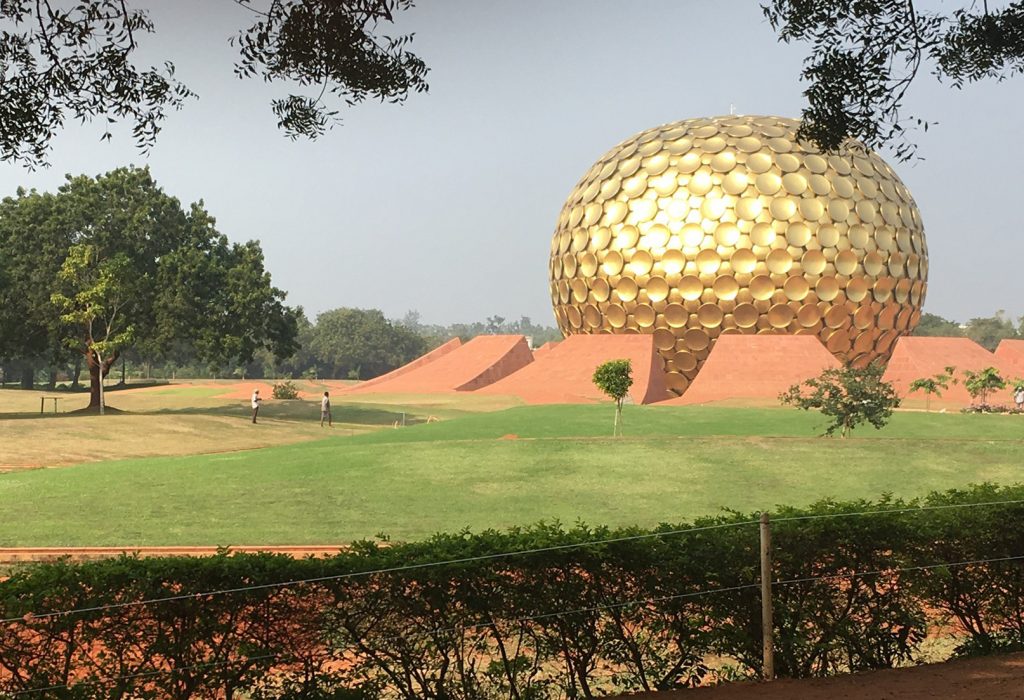 Quite close to the ashram is the White Town. Puducherry’s French heritage is mostly concentrated here. It is that place where the French left their culture through buildings, road systems, infrastructure, and memories.

Over the years, foods have changed to more Italian with maybe some French. However, it is not disappointing as a very distinct hippie commercialization of Puducherry has kept it moderately expensive, with heritage buildings, and cuisines that are invented with a combination of French, Tamil, and some alien cultures brought in by tourists. It is not uncommon to find “butter chicken with french fries (or rice)” on the menu at the small hippie restaurants.

I lived by the Auro Beach, which is equidistant from Auroville and Puducherry (about 8 kilometers). Auro Beach has scanty civilization on the beachside – a five-minute walk from the beach to the main market. It is advisable to rent a motorbike or a bicycle here due to the distances. Auto-rickshaws are expensive and often do not use the meter. So, there is always a 5 minute negotiation before the ride.

However, one can never be too upset in Tamil Nadu. The salty breeze that flows inland, the earthy atmosphere of the city in bamboo calms the mind, and the greenery around with tall palm trees with umbrella tops can always spell a charm to calm your anger.

Palms and bamboos are quite revered in Tamil Nadu. It is amazing to see most house tops made by a type of bamboo that is local to Tamil Nadu. Although concrete is trickling, here and there, into the architecture, the underlying rurality of Tamil Nadu, to a large extent, has not discarded the natural bamboo housing. My cottage on the beach was also entirely made of bamboo- a ten feet tall structure that stood on long bamboo logs, with planked flooring and dried bamboo leaves for roof top- all knit together by jute, strings, and nails. A ladder climbed into a short verandah, which was great post to relax, all the while listening to the sounds of the ocean, beyond the virgin beach. This sweet melody didn’t end until I left.

One must remember that though Puducherry still has a “white man’s” culture, and it is not uncommon to be asked to leave certain places if you are an Indian, sad and true. But, there are many other places around that very welcoming. so best to stay away from places that are “villas.”

Tiruvannamalai is a hilly area situated in the Anamalai Hills of the Eastern Ghats. At the foot of the hills is the Annamalai Temple. It is said to be the largest Temple in the world, dedicated to the Hindu Lord Shiva.

The mythological story for the temple has it that Lord Shiva (the destroyer) asked Lord Bramha (the creator) and Lord Vishnu (the keeper) to find the center of the universe. Lord Bramha turned into a swan and flew as high as he could and returned with an answer. Lord Vishnu became a bore and dug deep into the earth and returned with an answer. They both admitted to have found the center of the universe. However, they had both lied. So, Shiva created an endless fire that passed through the magma of the earth below and reached the highest skies. This fire was created at Annamalai (now known as Tiruvannamalai). Shiva suggested that this is the place where ego would perish and die. Four mandapams were built around the place of this fire. Thus, the temple of Arunachalayar.

The temple has four entrances, facing the four directions. It is suggested to be auspicious to enter from the South Gate. Annamalaiyar is prominently a Shiva temple. It is said that after Shiva created fire, he settled in the hills of Arunachala. Parvati joined him and the temple was created.

At the temple are also idols of Ganesha and Kartikeya (Murugan). Although Ganesha is the
beginner of all things good, Kartikeya is revered very highly in the Southern India. He is the God of War who kills ego and hatred. Hence in Tamilnadu, Lord Murugan’s idol is always placed before the Shiva-Parvati temple. Just like Lord Shiva has Nandi at the entrance, Lord Murugan is always accompanied with a peacock. The peacock represents the youthfulness of the Lord and his mission to fight ego and hatred.

The temple is large and takes a good 20 minutes to complete an entire circle. I took up a room next to the temple to enjoy the soothing morning aarti at 5:30 am, so culturally Southern! The early risers with early coffee shops was quite a delight to walk around and chill at before the sun rises. Being a very religious place it is extremely safe for women to be on the streets at early hours, which was a very welcoming experience.

Behind the temple, about three kms away is The Ramana Ashram. Swami Ramana is said to have visited the temple in his youth and promised Lord Shiva to renounce everything, and live a life of a monk. He meditated in the caves of the Arunachalam hill, which are accessible by an hour long walk up the mountain. The caves are accessible and one must meditate in these caves just to experience silence and peace. The Virupaksha Cave was my most favorite. It still maintains its history with stony roof and muggy darkness in the mediation room.

Near the Ramana Ashram, there are traces of the hippie culture of India. An obvious German Bakery is right around the corner serving good food and cozy ambience. However, it is a must to try many other hippie cafes around like the Shanti Cafe for its Indianized yet extremely delicious cheesecake.

Five days of Tamil Nadu gave us a lot of spiritual upliftment. The meditation agenda was met, and spirituality was largely achieved through mediation, greenery, and nature. It is advisable to visit Puducherry a little more than five days as there is enough to see and do. If traveling to Tamil Nadu, the Arunachalayar temple is a must visit for its superb energies and positive vibes.