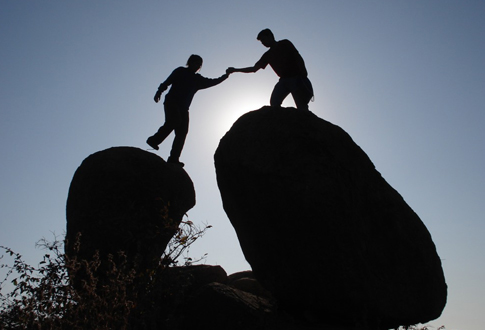 Have you ever travelled to a place in the wilderness where there is no temple, no historic monument, no shopping market, no beach? Do you feel the need for adventure? No, not that video game; I mean the real adventure of climbing rocks, trekking forests, encountering wild animals, parachute jumping! Do you feel is there a need to take such trouble when you can relax at home and watch TV in the weekend… Or do you feel the need for an adrenaline rush and want to try it all before you die…

Then there is hope for you in our laid back nawabi city! There are many adventure groups across the city that regularly organise adventure camps in many well known sites in India, which could range from a short trek around Moula Ali inside the city to Mount Everest base camp. I was fed up of my desk job in a typical services firm where the air-conditioning shuts out all natural light and fresh air completely. I was desperate to get out in the open go for a long ride into the countryside, trek up a mountain and push myself to the limits.

Recently, my colleague went for a trek to Dudhsagar Falls in Goa where he saw the train going under the waterfalls. Train going under a waterfall that too in Goa! It took some time for me to close my gaping mouth! Searching for the group that organises adventure trips to places around the city, I got to know about Great Hyderabad Adventure Club (GHAC) which was founded in 2008. I went for a short trek around Durgam Cheruvu and I realised that there an unexplored part of this well known lake covered with huge boulders and shrub forest.

GHAC was founded to bring adventure and fitness to the laid back nawabi city. It was founded by team of working professionals led by Diyanat Ali who wanted to bring Hyderabad on the map for adventure. The progress during the initial two years was tough and there was not much response but Diyanat and his team did not give up easily and continued conducting 750 adventure events despite poor response.

The real growth came in the last one year and there are nearly 5300 members at present. Diyanat says “Today’s youngsters are finding adventure activities much more exciting than pubs or movies. In fact after the recent movie ‘Zindagi Na Milegi Dobara’ the interest in adventure has increased manifold. People have realized that sedentary lifestyle is no good for their health and there is nothing better than a good walk into the wild.”

So now you have options galore – Nature treks, birdwatching hikes, rock climbing, rappelling, white water rafting, paragliding and even serious mountaineering activities. Gyan Shikha and Shobhit Gupta from Deloitte who were part of many such trips rave about the thrill they got for such activities. Particularly the rappelling and white water rafting in near Dandeli was the most exciting for Gyan Shikha. The adrenaline rush she experienced when the raft went over the gushing white waters of Kali River was the most memorable for her. Later the rappelling activity of climbing down a cliff with ropes was the most daunting task she has ever done.

However, experts like Diyanat feel that the difficulty in adventure is relative, but the duration of the event adds to the difficulty. For him the Everest base camp and Annapurna base camp treks in the Himalayas was the most difficult and enchanting at the same time. It’s remarkable that members of GHAC adventure club have been to the Everest Base camp for 5 Times and they are going again in October 2011.

Now if you think that a trek in the Himalayas is too daunting for you, you can begin with short treks in around our nawabi city. Short duration treks are the most popular among beginners because it takes just 5-6 hours and has negligible cost. Since GHAC is a non-profit club, it sustains itself with nominal fees charged for the activities. Typically events are frequently conducted at locations such as Ammuguda, Shamirpet, Khajaguda nearly every weekend. So it’s high time we wake up from our slumber, switch off the TV and pack our backpacks to head into the nearest wilderness. Let’s do it soon before the nearest wilderness disappears!