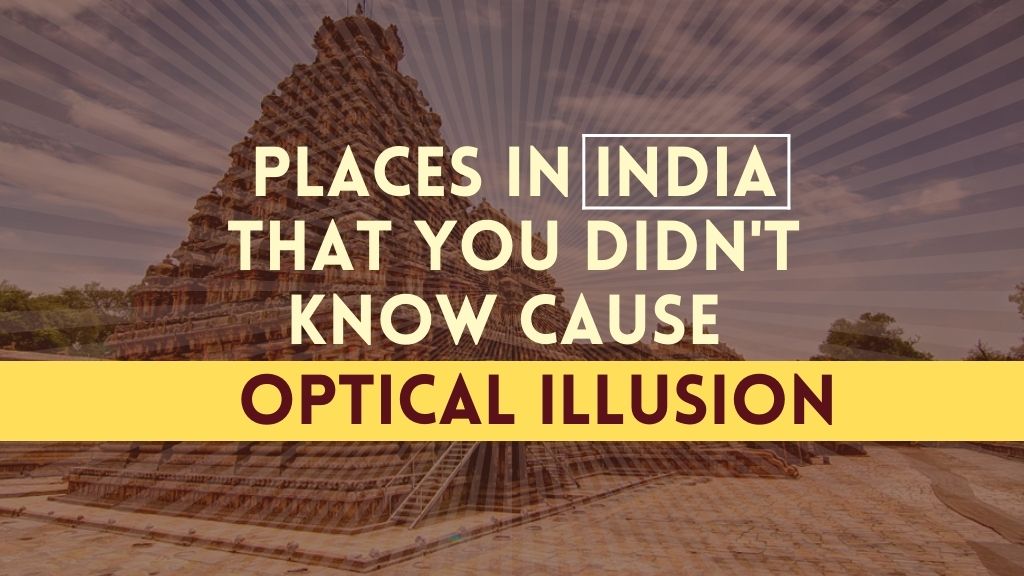 India is a land of mysteries. If you love travelling, then there’s no chance that you would not have encountered a single bizarre place that made you stop by and think. India has millions of secrets buried deep under the heart. Thinking about India’s wonder, there are a plethora of mysterious places wrapped up in fascinating secrets still waiting to get disclosed. Have you studied Gravity? Do you trust your eyes? Have you ever heard of the unidirectional downward flow of a waterfall? Well, keep them in the backseat and tighten up your seatbelts because we are now entering the country of mysteries, India. Here are some of the fascinating places in India that you didn’t know cause Optical Illusion:

The Magnetic Hill of Leh has made its way to the international report of the most mysterious places in the world. Found at an altitude of 3500 meters, the Magnetic Hill is an exciting mystery and fun play for the tourists. Here, you can witness the crash of Newton’s theory. This place defies Gravity. The vehicles, with their engines shut down, travel up the hill on their own. According to tourist experiments, the car went up the hill at a speed of 20 kilometres per hour.

In reality, the hill’s land creates an optical illusion, making the downhill slope appear as an uphill slope. The vehicles move down the mountain; however, it seems as if they are going up. This phenomenon is called the ‘Himalayan Wonder’.

The Kavalshet Point at Amboli in Maharashtra is a famous tourist place. Every year thousands of tourists come to this place to experience the unbelievable. This place screams’ Gravity is a joke’! The breathtaking view of the reverse waterfall is something worth remembering for eternity.

The wild wind blowing in the valley makes it look like the water is flowing upwards. This fantastic optical illusion is accompanied by sound illusion as well. In the monsoon season, the wind in the valley flows at a devastating speed, making the water falling down the waterfall seem to come up. That is, the waterfall appears to float towards the sky.

The bizarre phenomenon that occurs in the deep marshes of West Bengal freaks out the native fishermen of the region. The ‘Aleya Lights’ are sighted in the nighttime. The sighting of these unnatural glowing lights of different colours is locally seen as spooky and ghostly.

The scientific theories justify the phenomenon as the ionization of methane. The methane gas emitted from the dead and decaying matter in the marshes ionizes, resulting in this effect. The real reason behind the ‘ghost lights’ is the oxidation of phosphine, diphosphate, and methane and not some supernatural entity. The cold methane fire in the abandoned deep marshes creates an optical illusion, freaking out the natives.

The anti-gravity hill of Gujarat is next on our list. Tulsishyam is located between the Amreli district and Junagadh district. It is famous for the ancient Krishna temple and calming hot springs. Like the magnetic hill in the Himalayas, here too, the cars act up on their own.

The locals see the road on the Tusishyam hill as a gateway to heaven. The calling of God, making the cars and vehicles attracted to go up the mountain.

Many people see it as a crooked vortex of Earth’s gravitational field. However, the scientific theory urges that the phenomenon occurs due to the structure of surroundings. The land on either side of the road gives this effect. Put simply; the car is moving downhill, fully obeying the law of Gravity. It is just an optical illusion that makes it seem like the vehicle is moving up the slope.

Taj Mahal is the seventh wonder of the world and the monument of love. Other than these two attributes, it is famous for its mystic architecture and grandeur as well. The architects built the memorial with the image of Jannat in mind.

As soon as you enter from the big Redstone Mosque gate, the monument seems large. Although, as you move towards the actual building, it seems to shrink. That is, it looks greater from a more considerable distance and looks smaller as you go nearer.

The loveable monument is full of such optical illusions. The four long minarets around the main complex seem to be leaning outwards. However, it is argued that this was done for safety purposes as the Taj Mahal is built on a tectonic plate prone to earthquakes. Moreover, the monument is full of symmetric proportions; everything looks implausibly symmetric, from the Persian designs to the garden in front of the main complex.

Constructed during the 11th-12th century, the Airavatesvara temple shows remarkable examples of the oldest architectural optical illusions in the world. The great Chola temple is located in the earthly state of Tamil Nadu. The exceptional craftsmanship on the walls of the temple includes intricate carvings. One of such carvings shows a spectacular yet mind-blogging image of an animal, which looks like an elephant from the right and a bull from the left. The relief carved on the wall depicts two bodies, with their heads overlapping. The head resonating with both animals (elephant and bull) results in visual trickery.

Reading ‘Veerabhadra Swamy temple’, your mind must have dawned on the mysterious hanging pillars of the religious monument. But other than that mind-blogging thing, there is a perfectly carved artwork that attracts the visitors. The ancient temple, built around 600 years ago, is a fascinating example of one of the oldest optical illusions in India. The Lepakshi temple is famous for its three-faced cow etched on the wall of the temple. The temple is a specimen of sheer excellence in carving techniques.

The historic place in Lucknow is fondly called ‘Bhoolbhulaiya’ for its complex yet marvellous architecture. The visitors have noticed a stage thing in this place. One can see the reflection of the main street in the baoli water in this monument. The baoli is present on the side of the Imambada and is at a 45-degree angle to the main gate. Despite its location, the visitors can see the reflection of the street in the water. What do you think? Is it an optical illusion or a miracle?

This is a list of 8 places in India where you didn’t know the cause of optical illusion. The list comes to an end here; however, the places full of marvellous sights do not. There are still many places in the country where one might see what doesn’t exist. For instance, the UFO mystery of Kongka La Pass in India is waiting to be revealed, the ancient buildings’ architectural marvels, and many more.