Visiting the Original Bahubali in Shravanabelagola

I suppose Baahubali 2 has been the most awaited sequel movie in the history of Indian cinema. The historical thriller film has aroused maximum curiosity and raked up much controversy during its release. The character of Satyaraj has been the eye of the storm both inside the movie theatre and outside. Hope people can now find out why did Katappa kill Baahubali and sleep in peace!

However, I was more intrigued by the movie’s story connection to the original Bahubali who lived in mythical times. When I saw ‘Baahubali: The Beginning’, I was disappointed to find the story has no connection whatsoever with its historical namesake. Recently, a friend of mine called me to his hometown that was close to Shravanabelagola and I was more than eager to visit the place.

Shravanabelagola is the location of the Gommateshwara statue that is dedicated to Bahubali, a much revered Jain saint. It is situated above a hill named Vindyagiri in Shravanabelagola in the Hassan district, Karnataka state. We decided to visit the place and trekked up the Chandragiri hill, which is a massive rocky hill rising abruptly amidst the plains of South Karnataka. The climb is easy since steps are carved out of the hill and flanked by iron railings. It is better to climb early in the morning since the mid-day sun will heat up the granite rocks. 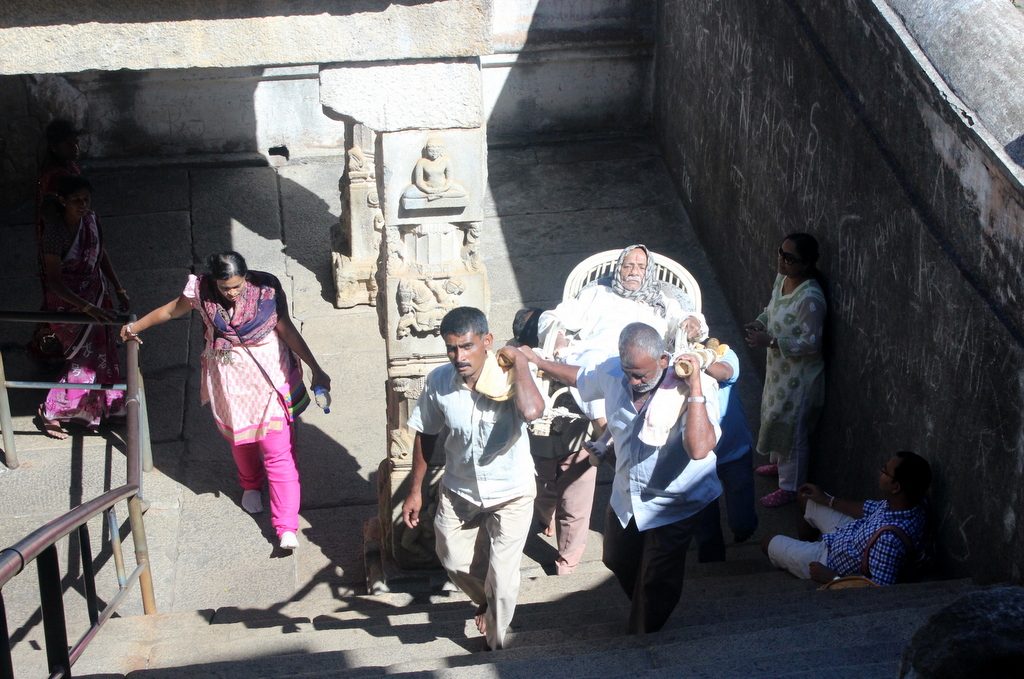 I made an effort to climb up the 650 steps at one stretch without looking down so that the bird’s eye view at the top will be breath-taking. The panoramic view at the hilltop was truly spectacular. Odegal Basadi is the first temple we encounter when we reach the hilltop of Vindhyagiri. The temple is dedicated to Adinatha Thirthankara whose sculpture is carved out of black granite stone. Adinatha or Rishabhanatha is the father of Bahubali. 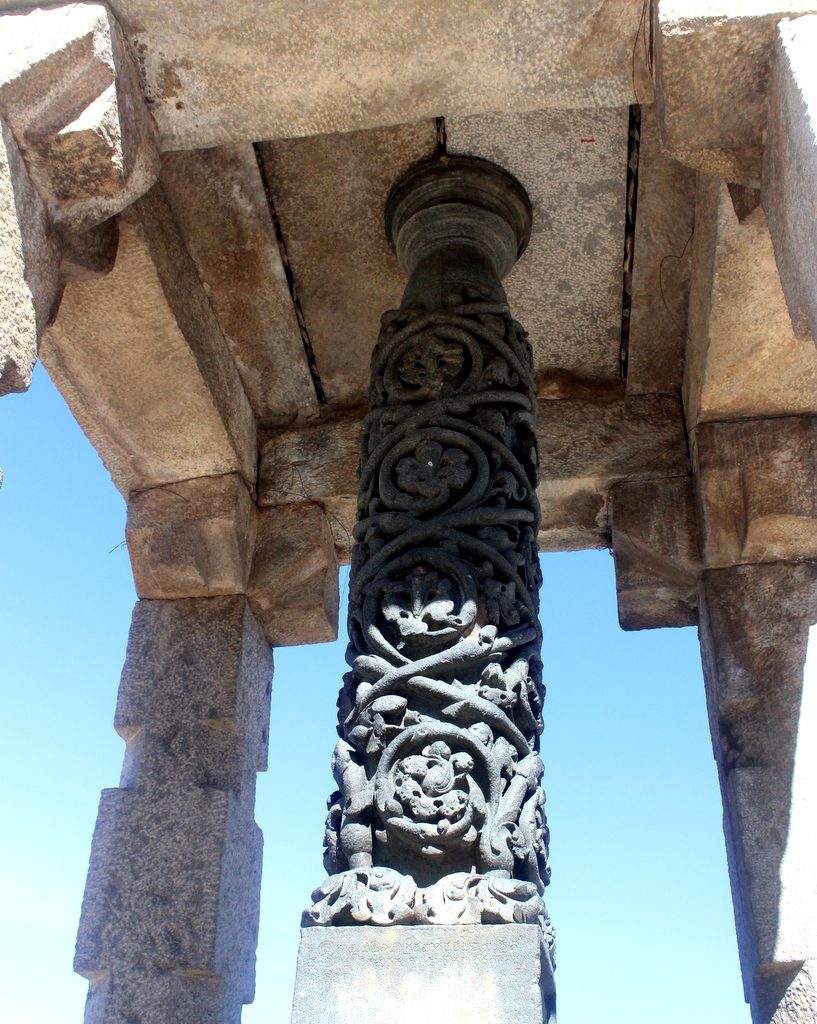 Then we enter Siddhara Basadi, the main temple housing the Bahubali statue, which is surrounded by a large pillared mandapa containing 43 carved images of various Jain Teerthankaras. Amidst the mandapa stands the majestic nude figure of Bahubali that is awe-inspiring not only for its enormous size but also serenity in its meditating face. Bahubali means one with strong arms, so the statue shows elongated arms intertwined by creepers since he was meditating motionless. 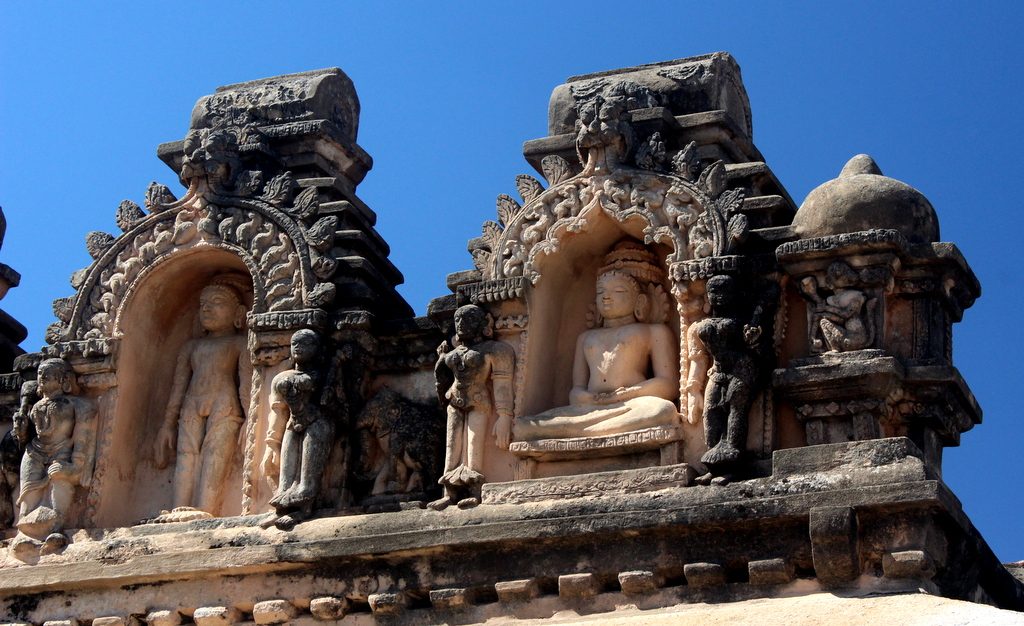 Standing at 57.5 feet height atop the Vindyagiri hill, the Gommateshwara statue of Bahubali is tall enough to be visible to visitors entering Shravanabelagola by road. Chavundaraya, a commander in the Ganga dynasty commissioned the statue and dedicated it in 981 A.D. The magnificent 57-foot (17 m) monolith is carved from a single piece of rock and is one of the largest free-standing statues in the world. 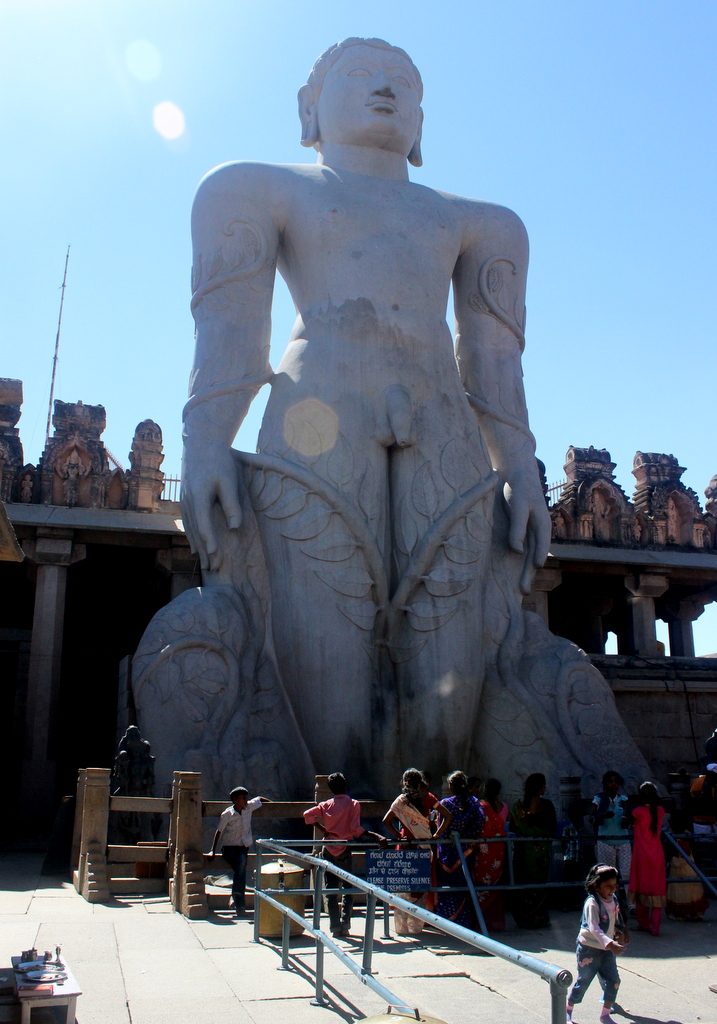 The legend of Bahubali goes like this – Rishabhanatha was a famous king in the Ikshvaku dynasty who renounced his throne to his sons, but there was a power struggle among the sons to become the king. The eldest one Bharata Chakravarti staked claim and other brothers gave up their own lands for his sake, but Bahubali decided otherwise. However, instead of their armies fighting, the king’s ministers advised the sons Bharata Chakravarti and Bahubali to fight among themselves and settle the issue. So they fought each other in various types of fights – Drishti yuddha – staring eye-to-eye, Jala Yuddha – a fight in water, and Malla Yuddha – wrestling.

Bahubali won in all the three fights and when he was about trounce Bharata by throwing him down, he is struck by the realisation that he is about to kill his own brother for worldly belongings. He then renounces everything and becomes ascetic who meditated without food, water and rest. Shravanabelagola is believed to be the place where Bahubali attained ‘Kevala Jnana’ or nirvana or omniscience. 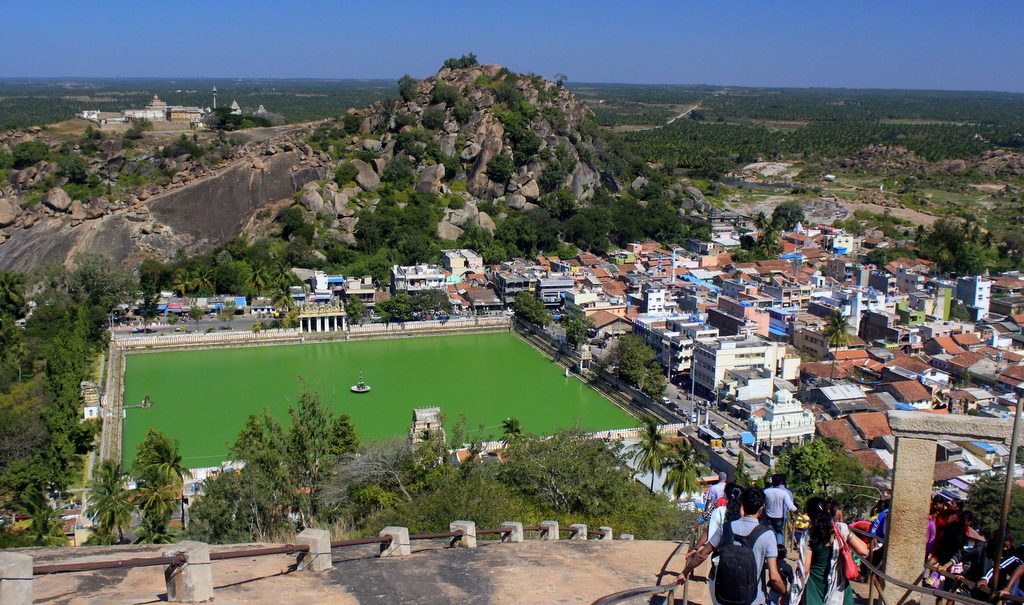 After watching the religious rituals of Jain pilgrims, we came out of the main temple. We visited the Kalyani Pushkarini, the large pond at the foot of the hill, but we didn’t have time to visit other shrines in Shravanabelagola. We then had sumptuous Jain food in a nearby hotel where we got dhal, roti, rice, sambhar and buttermilk. Jain food items are prepared without using onion or garlic.

We visited Shravanabelagola in December when the weather was pleasant, but is not the right time due to summer heat. People who are eager to visit Shravanabelagola and see the massive Bahubali can do it during the upcoming ‘Mahamastakabhisheka’, an event that is organized every 12 years. Coconut milk, curd, jaggery, milk, saffron and sandalwood are used to anoint the saint Gomatheswara’s statue. Then next event is scheduled in 2018.

Nagaland is a land of many tribe and cultural diversity, and the festivals of Nagaland beautifully portray the harmony and vibrancy of this state. Here is a journey through the numerous and diverse festivals that are part of Nagaland.
Read more
Art & Culture

A glimpse into the beautiful benefits of coconut and all the byproducts that have shaped the culture, heritage, demographic, and gastronomy of India.
Read more
Art & Culture

Let’s take a look at 10 traditional games of India that have defined childhood for entire generations. This list comprises both indoor and outdoor games, and hence, it is beneficial for both physical and mental strength.
Read more
Art & Culture

Harvest Festivals of India – The Planting of Social and Cultural Landscapes

Harvesting festivals of India remind us of how much nature and man work in tandem to create the most basic of necessities for survival. The mutual respect is evident and more so during the harvesting festivals.
Read more
Offbeat Travel

Caravan travel in India is gaining popularity among young travellers these days. Here are 4 Caravan travelers from India that are regularly empowering Caravan tourism through their trips:
Read more
Offbeat Travel

Trip to Coorg - A beautiful destination in Karnataka, Coorg, serves as a fascination to many travellers who seek a sense of thrill mixed with scenic beauty.
Read more
Art & Culture

The culture of Manipur is vibrant, intricate, and rich. Tucked away in the mighty hills, their beautiful tradition is a sight to behold and store in our memories and cherish for ever.
Read more
Art & Culture

Tamil Nadu Culture: Tamil Nadu is a land of enchanting beauty, a vibrant culture and a grand tradition. Through its fascinating heritage and historical significance, the state has managed to capture the attention of the world.
Read more
Alternative-lifestyle

Indian Agriculture – Not just an Economy, But a Culture

Indian Agriculture - Agriculture is the heart of this country, its farmers and their toil is the reason why we not only are able to feed such a huge population but also export food and foodproducts.
Read more