The invisible connection between man and Nature is ever-present and long-lasting. The way we feel when we are amidst Nature is something completely off the hook and inexplicable. That’s why one of the best things about traveling is that we can witness everything that a place has to offer – from the artificially made things to the naturalistic elements. How many times have we stopped to take a picture against the backdrop of lush greenery, when on a trip? Talking about Mother Nature, one of the best and superior attractions of a place has to be its waterfalls. Falling at high speed, thundering down with loud incessant noise; waterfalls are a majestic gift to mankind. Don’t we love to witness the extraordinaire of Nature in this form? And of course, what better place than Karnataka to see the finest, most exciting waterfalls! Planning a trip to Karnataka would be futile unless you visit the below-mentioned waterfalls found in Karnataka.

What best way to begin this article, if not by mentioning Jog Falls? Bagging the title of the 3rd highest waterfall in India, Jog Falls should be a staple in your itinerary. Situated in the Shimoga district, the Jog Falls are alternatively known as Geruoppe Falls and Jogada Gundi. The lovely waterfall is made by the convergence of 4 smaller falls namely, Raja, Rani, Rover, and Rocket. Apart from its never-seen-before beauty, one of the reasons which make Jog Falls so special is the fact that the fast-flowing water does not touch the stones on its way down. This is unusual as most waterfalls do maintain contact with the rocks on their descent. The best places to witness the beauty of the Falls include the Watkins Platform. Jog Falls provides an ideal spot for tourism and is a favorite amongst trekkers.

Situated near the beautiful Kaveri River, the Shivanasamudra Falls was one of the oldest hydroelectric stations in Asia. Also, a popular travel destination, these Waterfalls are divided into two segments; one of which is Gaganachukki, and the other is called Bharachukki. The waterfalls are perennial in nature and tourists are advised to visit the place during the Monsoon season to get the best experience. Witness the two cascading falls along with the tiny temples distributed along the area.

Also going by several other names such as Kalhattagiri and Kalahasthi, the Kalhati falls are absolutely spectacular. It is located in the Chikmagalur district and the water falls from a height of more than 400 feet. Interestingly, the fact that the falls are a natural goldmine is lesser-known. Kalhatti Falls is highly recommended to all those adrenaline junkies out there because thanks to its structure, people can take showers beneath the gushing waters. Another interesting facet of the Falls is its religious importance. The Fall waters are considered to be auspicious and divine due to the existence of Veerabhadreshwara Temple within it. This temple was built in the Vijaynagara era and is devoted to Lord Shiva. An impressive amalgamation of reverence and thrill, indeed!

A splendid addition to the list of waterfalls, the Apsara Konde Falls is a relatively smaller waterfall. The name ‘Apsara’ (meaning angels) has been granted to the place because it falls from a height of 10m directly into a pond. The falls look towards an ocean and legends believe that the angels would descend from the holy heavens to swim in the pond. Another noteworthy fact about the falls is that it contains several caves within it which are believed to be the five Pandavas ‘ residences in the course of their exile. The Apsara Konde Falls is tourist-friendly and amazing place to visit with friends and family.

Located in the picturesque setting of the Brahmagiri hills, these falls are one of the top tourist destinations in Karnataka. Similar to the Kalhatti Falls, the waters of the Irupu falls, too, are considered highly auspicious and divine. This is due to a popular myth that reads that on his way to rescue Sita, Lord Ram and his brother had stopped to drink some water. This is when Lakshman brought some water from the divine river. Also, due to the Temple Rameshswara being located on its bank, the place has a massive pilgrimage crowd every year.

The brilliance of Nature, packed inside a waterfall in Coorg, the Abbey Falls is a treat for all nature lovers. Situated amidst a beautiful coffee and spice plantation, the waterfalls flow through to converge with the Cauvery River from a height of 70 feet. The Falls was previously named the Jessy Falls, who was the daughter of the captain of Madikeri.

The breathtakingly beautiful Hebbe Falls is Nature at its finest! The enchanting falls plunge from a staggering height of 550 feet. It is located within the Bhadra Wildlife Sanctuary and is one of the most sought-after places in Kemmanagudi. Tourists can leisurely play in the water as it is said to cure skin diseases. Indulge in the fantastic coffee plantation nearby and enjoy the waters of Hebbe Falls to drown out your worries! 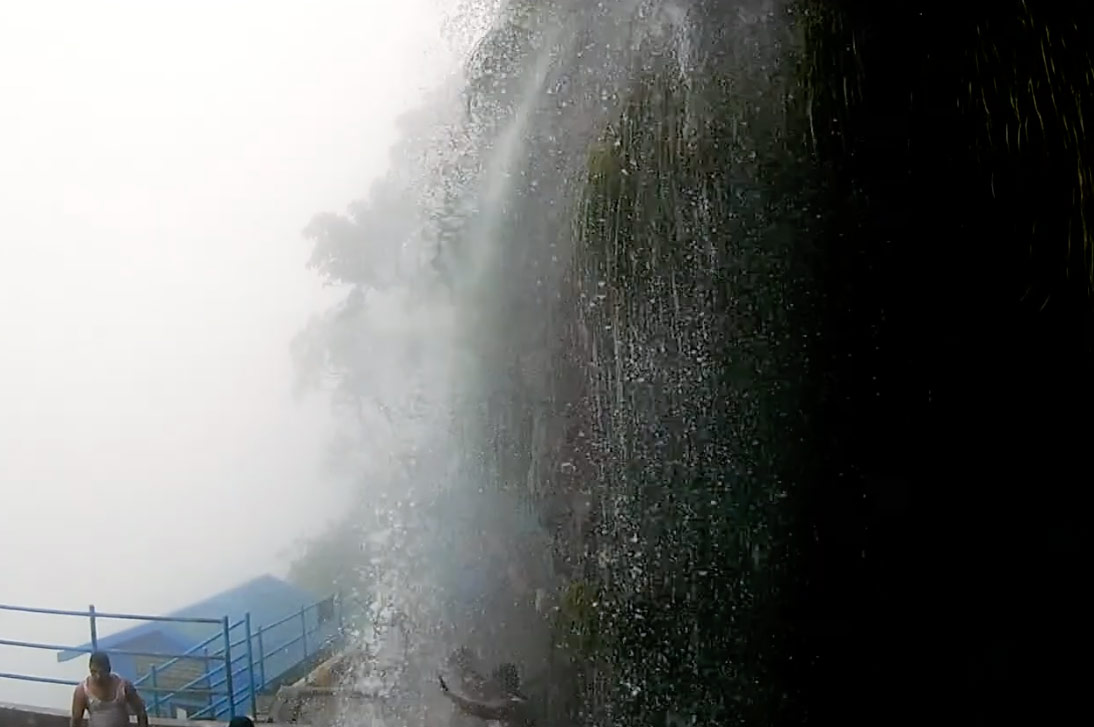 A waterfall with the added perks of a forest, the Manikyadhara Falls is located in the forests of Baba Budangiri. The waterfalls from about 30 feet and has a peaceful setting. The waters of the fall are believed to be holy by the religious minds of both Hindus and Muslims. Locals state that the pilgrims who bathe in the waters of the falls leave an item of their clothing as an offering; and according to Muslims, offering ornaments such as bangles here will aid in finding a good groom for the daughter. The special features of the Falls entail that the waters do not drain out even in the summer season.

Located in the famous Udupi district, the Kudlu Theertha is also known as the Sita Falls. An ideal spot for relaxation and tranquillity, the falls are mainly popular as a great trekking destination amongst youngsters. The rich forestry, water falling from 150 feet, and colorful flora make up for an exceptional experience.

The Niagara Falls of Karnataka, Gokak Falls stands tall at 52 meters. The Falls is where electricity generation had taken place for the first time in India. It is situated in the Belgavi district, between a charming valley. Some major attractions nearby include a 200 m hanging bridge, Kemple Park botanical garden, boating, hiking, temples, and more.

Any person who gets to witness the pristine glory of Mother Nature is extremely fortunate. The gift of nature and our will to preserve it is what makes us human. These falls in Karnataka are a constant reminder of our cordial relationship with Mother Nature. Such spectacular places give us a chance to have a wondrous time with our family and friends and to appreciate the boundless beauty and bounty of Nature forever.