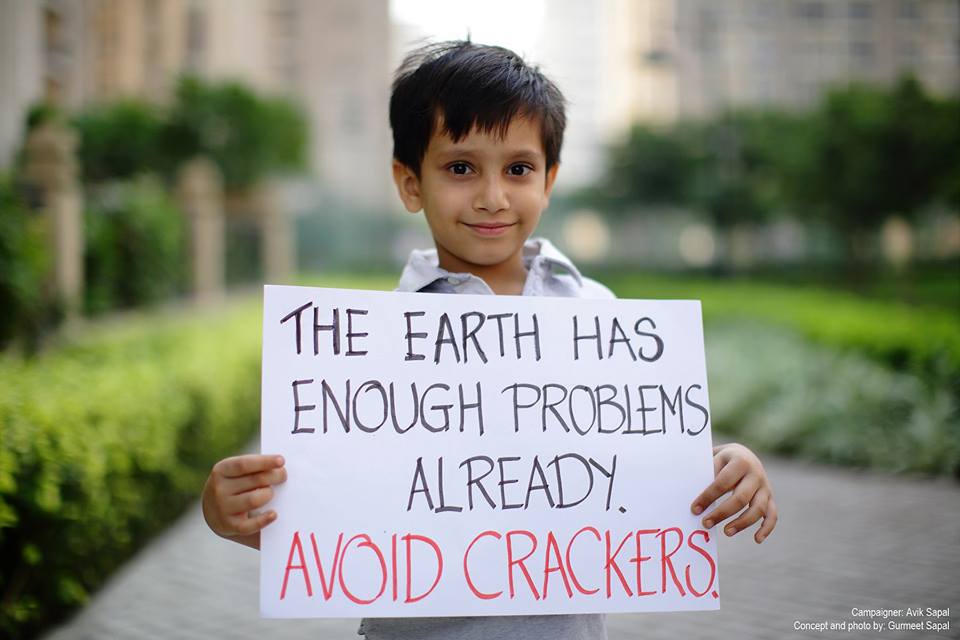 I jumped in shock. Before I could turn around to see where the explosion had taken place, I heard giggles. A group of three children aged 8-12 were standing outside the gate of a house with candles and boxes of fire-crackers.

“Sorry didi,” said one of the children, not looking remotely sorry. I walked away with a wan smile, marvelling at the sort of parents who allowed such small children to endanger themselves and everyone else by literally ‘playing with fire’.

Firecrackers are a menace to everyone concerned despite their beauty when seen from afar. Right from their manufacture in Sivakasi, a town in Tamil Nadu (70% crackers are made in Sivakasi) to their multifarious effects on people, animals and the environment, fire-crackers, negatively impact all those who come in contact with them and even those who cannot help but be in their proximity. 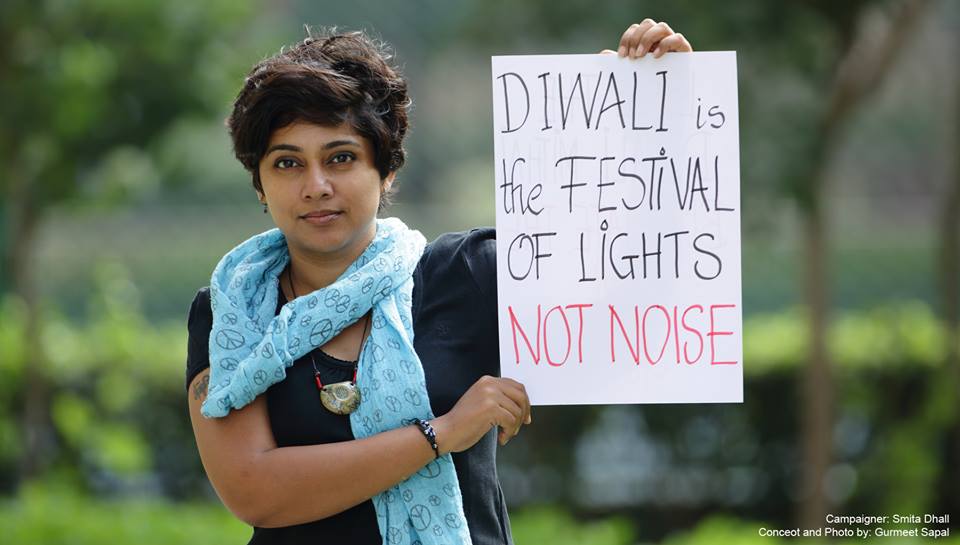 To begin at the beginning, Sivakasi was declared ‘child labour-free’ years ago, but this claim can easily be challenged by anyone who has witnessed the manufacture of fire-crackers there. Children are no longer seen working on the shop floor of licensed manufacturing units, but in the unorganised sector, children as young as eight can be found in ‘cottage industries’ that function from homes and are largely devoid of regulations. Working nine hours a day, a child earns Rs.120 per day.

Can any of us really claim to have a conscience if we celebrate a festival by helping promote child labour and spreading misery in thousands of lives? Can we not pause to consider what Diwali is like in the lives of these children? The recent Nobel Peace Prize conferred to child rights activist Kailash Satyarthi should open our eyes to the plight of children who suffer agonies and for whom Diwali brings nothing but darkness.

Coming to the nuisance of fire-crackers closer to home, it seems to me that no sensible person can possibly be unaware of the health and safety hazards that playing with fire-crackers entails. If we choose to turn a blind eye and a deaf ear to the negative impacts of crackers, then very soon the ‘blind eye’ and ‘deaf ear’ will no longer remain mere metaphors. 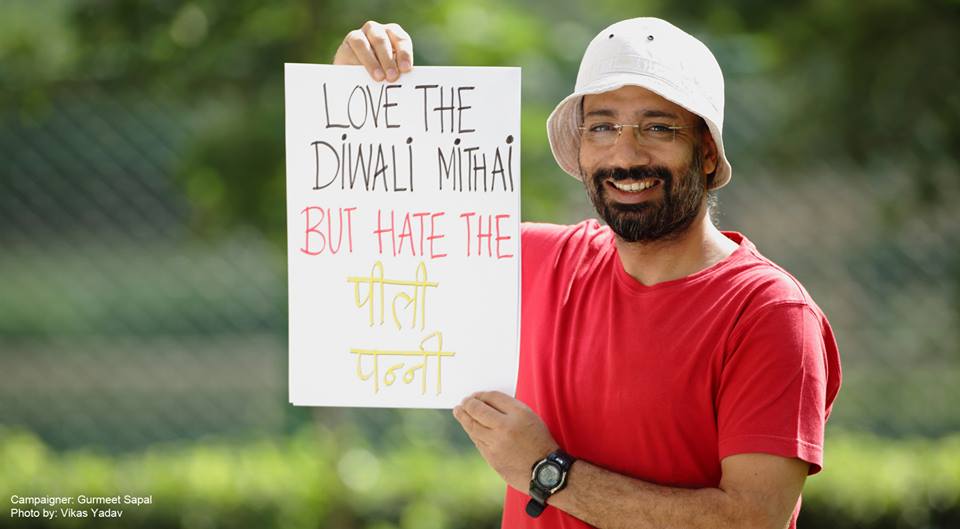 Every year after Diwali, smog envelopes the NCR region and reduces visibility to such an extent that even the safest of roads becomes accident prone. For the uninitiated, smog is nothing but smoke and fog. While fog is mostly water and clears quickly, smoke makes it denser and stay longer. Poisonous smoke from the crackers burst in thousands of households accumulates and suffocates the entire area for at least a month and then, it does not simply go away, but causes permanent damage to the atmosphere that takes decades to heal. All this, in turn, comes back to harm us in the form of rashes and skin cancer, irritation and swelling of the eyes, asthma attacks, etc. Do the parents who buy crackers for their children pause for a moment to think about the sort of planet they will be leaving for the same children?

Dr. Harshvardhan, a popular politician and doctor renowned for his work as an ENT surgeon had stated that the number of patients with hearing and breathing difficulties increased every year after Diwali. Among them, children made up the larger fraction of sufferers. Loud noises are especially harmful for very small children who are more prone to experiencing psychological trauma because of it, animals who get frightened and enter a flight-or-fight mode, and old and ailing people. 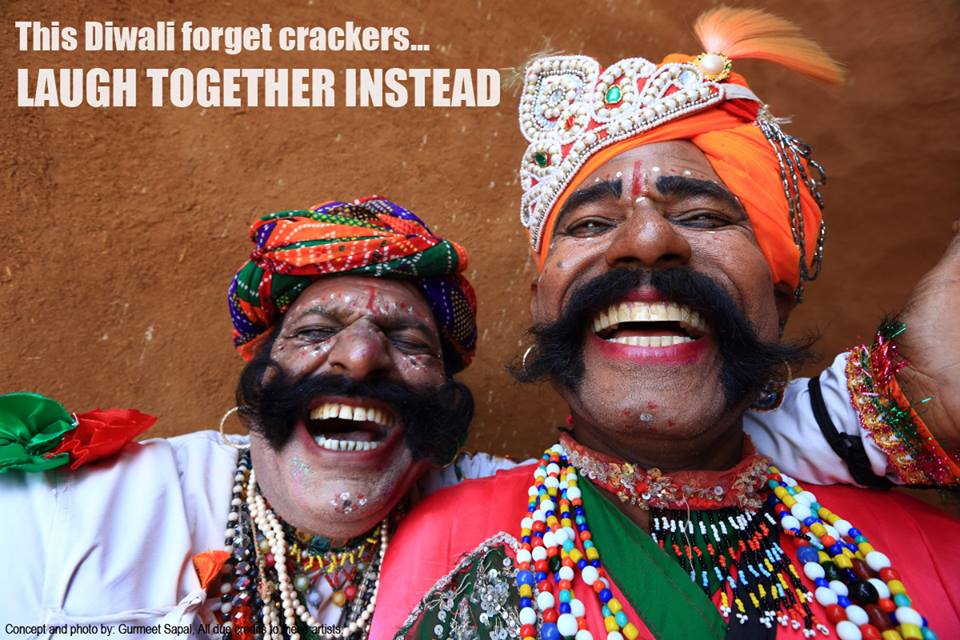 In Western countries, fireworks are enjoyed on festive occasions but unlike here, in India, there they have specifically demarcated locations, such as open fields, away from populated places, where fire-crackers are burst. We keep being told that we emulate the West but in this regard, it is my opinion that emulating the West would be a good idea.

Finally, when the crackers are burst and rockets are shot, all that one sees is debris. Piles of soiled remains of used crackers can be seen everywhere. Some of this is carried by the wind into our homes. The entire picture is one of mess and filth and certainly not becoming of a ‘festival’.

The Delhi government has been conducting an anti-fire cracker campaign to sensitise residents to the impact of crackers. Well known environmental cinematographer and photographer Gurmeet Sapal has created an eye-catching photo campaign to build awareness about a cracker-free Diwali.

The government and private organisations can only make laws and build awareness. Unless we, the common people, the buyers of firecrackers, the wilfully careless people who spread pollution that comes back to haunt us, choose to put an end to the noise, the smoke, and the fire, no law and no regulation can make a difference. So can this Deepavali be a brightly lit yet noiseless cracker-less festival of lights?