CSA Awareness – Speaking up! Before it’s too late

An acquaintance once posted on her Facebook timeline – “How many women out there have been victims of child sexual abuse (CSA)? The number of responses she got left her astounded! What’s more, women began to share this timeline status and many more, unknown to her, responded in the affirmative.

This simple exercise indicated that there are a much larger number of CSA victims than we actually perceive. Silence – often the refuge of a victim – is the reason many people today still believe that CSA is not something that can happen to us. What we lack as a society is better awareness about the problem, its consequences and most importantly how to deal with the victim – which in this case is a vulnerable little soul – a child.

CSA Awareness Month – the brainchild of Kiran Manral, author and Monika Manchanda, blogger and baker at Sin-A-Mon, is an online awareness campaign aimed at educating the masses in general about this menace. Career-women in their own right, these two ladies got together to spearhead what they believe is the first step to dealing with the problem – making people aware.

The birth of CSA Awareness Month

CSA Awareness Month is in its fourth year this year. “The idea came about from a conversation between Monika and me when we were returning from the Lavasa Women’s Rally in 2011,” says Kiran. “We realised that CSA was all around us but no one spoke about it. As parents, we thought we needed to do something to raise awareness, to break the taboo, to help survivors realise it was not their fault. We decided to do this through the media we were comfortable with, namely blogs, Twitter, Facebook and other social media.”

Reminiscing about the beginning, Monika says, “Once Kiran and I decided to do something, details were quickly hashed out, and April was announced as the month wherein interested bloggers and parents would post their thoughts on ‘Child Sexual Abuse Awareness Month’. The plan was to post these thoughts on a blog dedicated to this cause. Survivor stories were invited. NGOs who have built credibility in this field were approached and asked for inputs. The rush was incredible, though the revelation that almost everyone had a story to tell was scary.”

The Motivation – Nay, The Need to Speak Out

“CSA is a subject with huge stigma attached to it. We like to believe that it won’t happen to US”, feels Monika. She explains, “…and the very fact that people don’t talk about it, is responsible for children being victimized and abusers walking free. More than 50% of children have confessed of some degree of abuse at some point and in most cases the abuser has been someone they trusted”.

Yet, to take time out from a busy schedule, to set aside time to join hands with several other volunteers is not easy and the motivation needs to be there. Kiran says, “For me, the motivation has been the fact that I am a parent and I owe it to my child to do whatever I can to protect him. For others, the motivation comes from various things, being survivors, being parents, being concerned citizens. Each one brings something different to the table.”

The Work Done and Lives Touched!

CSA Awareness Month’s work initially began with a blogathon and over the years has grown to include more activities. Mobile apps, Twitter chats with experts and survivors are a few such additions. They have created some strong videos with professional help. They have also created a workshop kit, which will help one set-up and execute a quick good touch/bad touch workshop for a group of parents.

This year saw the first offline event being organized, where parents interacted with experts in the field of CSA. Child-related organisations like Yowoto, Podar, Arpan, RAHI, Enfold and Tulir were part of the initiative, who over the years have brought their professional approach and know-how to disseminate information to a larger audience. 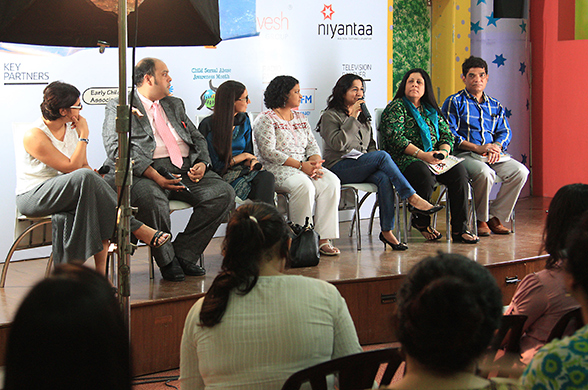 Monika told herself that if she could change one life with her work in this sphere, then her hardwork would have paid off. She says, “There was one person who shared her survivor story in the first CSA Awareness Month. She got in touch a couple of weeks later, asking us if we knew of counsellor she could approach. We put her in touch with an NGO in her region. Over the past 4 years, I continue to receive mails from her regularly. From being someone who was afraid of a man’s touch to getting married in a couple of months, her transition has been heart-warming. That is what we are working towards”.

For those volunteers who work behind the scenes, the journey has not been easy. Kiran says, “The stories one hears, the anguish one is privy to, the folks one doesn’t know personally who reach out to you with their stories. With initiatives like this, People are now more open to talking about it. People are more wary about their children and don’t trust anyone blindly. And parents now know or are informing themselves about how to talk to their children about good touch/bad touch and equipping their children with strategies on how to protect themselves from sexual predators.”