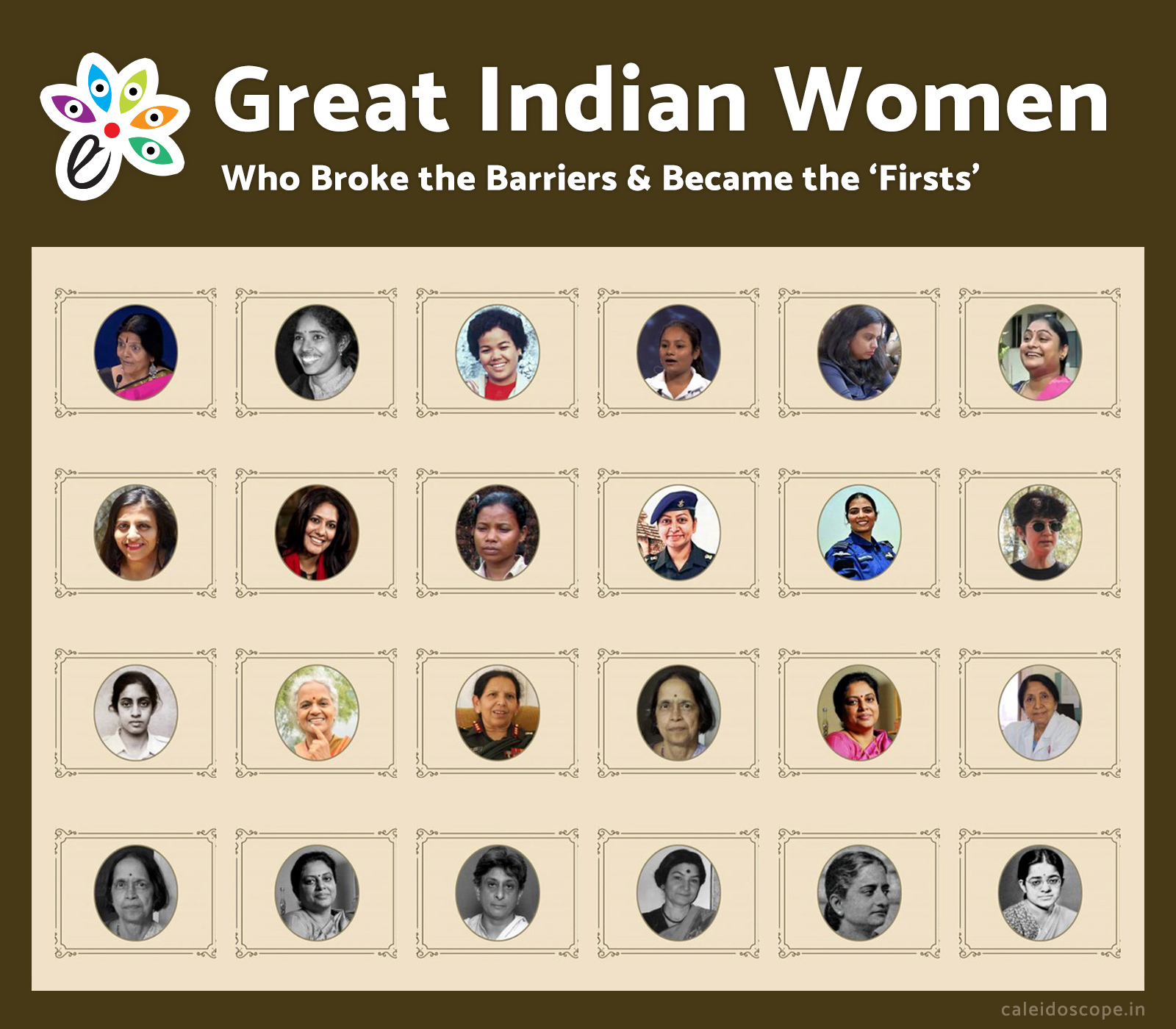 There are some fields that are dominated by men. For a long time, a woman breaking barriers and entering an occupation that was only driven by men was unheard of. However, a lot has changed in the last century and more women are making a foray in the fields of science, technology, sports and more. Here is a list of amazing women achievers of India, who made India Proud in their respective fields.

The home has always been deemed to be the first and most important priority of a woman for generations. Teach the girl how to cook, clean and take care of the family. That is about all that mattered. Yet, women began venturing into occupations and passion that brought them out of the four corners of their homes and exposed them to a world where they learnt more and felt independent. Teaching, sewing, home based businesses, such as, tuitions, running classes or selling items were the main careers around which a large majority of women centered. These occupations were safe and did not require a full time dedication.

This meant that though women were beginning to get educated they were still not boldly making in-roads into the ‘man’s world’. Even in academics, women chose subjects dealing with Arts, Humanities and Commerce and rarely took up courses in the sciences and mathematics. This was not because women were any less smart, but most of the studies in science required more than 3 years at the graduation level. This was one of the main reasons that women refrained from pursuing these fields, because again ‘marriageable age’ was a big milestone in any woman’s life.

Thankfully the passage of time, more awareness and a world-wide wave of feminism slowly but surely opened the eyes of a patriarchal society. There is still a long way to go, but some incredible women who took charge of their lives and lived their dreams on the strength of their own desires and hand work also paved way for generations of women to come. These women who became the firsts in their fields, did the impressive impossible. They showed others that women could also do what men did. And they did it with such grit and determination that their lives have been an inspiration for all generations.

Anandibai Joshi and Kadambini Ganguly were one of the first female Indian doctors who qualified to practice western medicines.

Janaki Ammal (1897-1984) – With Botany as her interest, Janaki Ammal was the Director-General of the Botanical Survey of India and did a lot of work on medically and economically important plants.

Kamala Sohonie (1912-1998)- She was the first woman to get a PhD in a scientific discipline. She was the first female student of Prof. C.V. Raman who himself was averse to having women students. But her intelligence and caliber made the Professor himself encourage her to research further.

Asima Chatterjee (1917- 2006)- A highly recognised chemist, she was brilliant in the field of organic chemistry. She is known for her research on anti-epileptic and anti-malaria drugs.

Rajeshwari Chatterjee (1922-2010) – One of the first female engineers of India, she was given a scholarship by the then Government of Delhi to study abroad. She is known for her research on antennae and microwave engineering.

A.Lalitha – She is the first electrical engineer from India. She proved that if you educate a woman you educate her entire family. She was widowed at the age of 18 with a four month old son. She chose to move ahead with her life and went on to create history.

Darshan Ranganathan – An incredible organic chemist, she is known for her works in protein folding.

Dr. Aditi Pant – The first Indian woman to reach Antarctica, she is a well-known oceanographer.

Tessy Thomas – Also known as the ‘Missile Lady’ she has successfully launched the Agni missile series. She is the first Indian woman scientist to head a missile project.

Mangala Narlikar – A renowned mathematician, she finished her PhD after 16 years of marriage. A master of simple and complex mathematics she is loved by her students whom she taught in the University of Mumbai and Pune.

Indira Hinduja– She is the first Indian gynecologist and infertility expert who delivered a test tube baby in India.

Harita Kaur Deol – She was the first woman to fly without a co-pilot in the Indian Air Force, and she was just 22 years old.

Divya Ajith Kumar – She was the first woman to receive the ‘Sword of Honour’ from 244 fellow cadets that included both men and women.

Priya Jhingan – She scripted history when she became the first cadet to join the Indian Army in 1992.

Gunjan Saxena and Flt. Lt. Srividya – They together were the first women pilots to fly into a combat zone during the Kargil War.

Lt. Col. Mitali Madhumita – She is the first woman to receive the Sena Medal.

Shanti Tigga – The first female jawan in the Indian Army, Shanti achieved this when she had 2 children and was 35 years old.

Many other women who are stalwarts in the Armed forces include, Ganeve Lalji, Sophia Qureshi, Deepika Misra, Priya Semwal, Anjana Bhaduria, Nivedita Choudhary and many more.

Chhavi Rajawat – The first woman Sarpanch, Chhavi took the post in her village Soda in Rajasthan.

Anna Malhotra – She became the first IAS officer of India.

Ira Singhal – She is the first woman IAS officer with disability to top the Civil Service exams.

Karnam Malleswari – The first Indian woman to win an Olympic medal. She won a bronze Olympic medal in weightlifting.

Vijayalakshmi Subbaraman – She was the first Indian woman to win the titles of Woman Grandmaster and International Master.

There are many popular sportswomen who have achieved landmarks in their careers, such as, Saina Nehwal, Sania Mirza, Mary Kom.

Women in Others Fields

Bachendri Pal – She was the first Indian women to reach the summit of Everest in 1984.

Selvi Gowda – Her story to becoming India’s first female taxi driver is nothing short of an inspiration.

Chetna Sinha – She founded the first rural bank for women in India.

There have been firsts and many inspirations that have edged the Indian women to push boundaries and break frontiers. There are those that are very well known, the likes of Indira Gandhi and Pratibha Patil, and then there are those who have initiated small changes with huge impacts, such as, Surekha Yadav the first female train driver or Praveenan Soloman the woman that runs a crematorium. But each of them has proved beyond doubt that gender is no barrier when it comes to doing and following your heart.

Also Read – Role of Women in the Independence Movement of India