Have you ever wondered that what kind of scientific technology or infrastructure is required to provide water at your home? First, rain water is collected by forest and fed into rivers. This water gets stored in huge dams, then it is pumped through pipelines to water treatment plants and finally in taps of our homes. However, this process is not even 2 centuries old, and we humans have lived in civilized societies for more than 5,000 years. So, apart from filling a pot from the nearest pond or lake, how did our ancestors bring water to their homes?

India is a country blessed with some majestic rivers such as the Ganga, Yamuna, Godavari and Kaveri, but still, many regions in India face drought-like situations every year. In order to survive such drought conditions, stepwells were built across the country and the best of them are compiled here in a list by well-known stepwell traveller, Jatin Chhabra.

A stepwell has stairs to reach the bottom and room-like structures inside where commuters could rest, as the temperature in a stepwell is 5-10 degrees lower that the temperature outside. In simple terms, a stepwell is a combination of “well with stairs and rooms”, which act as a water reservoir and a resting place for travellers. What makes this well architecture unique is that it is only available in Indian subcontinent and it has improved from more than 4,000 years.
The oldest stepwell site in the world is the “Great Bath” at Mohenjodaro in the Indus Valley Civilization. The Great Bath was a water tank with stairs built on all four sides to reach the bottom. Alongside the water tank, there were rooms that many archaeologists believe were made for bathers to rest. The same symmetric steps concept is visible in the ancient stepwells built across India between 4th Century AD and 19th Century AD.
Since July 2016, I was searching for my blog JatinChhabra.com a theme that captures the unique aspects of my country, India. And I finally found it in a DVD of Batman: The Dark Knight Rises 2012! It’s true; while watching this movie, I came to know about a stepwell named, Chand Baori. A close friend of mine suggested that the Batman movie production team stayed in Rajasthan to film some parts of the movie and it ignited curiosity in me about why they chosen that particular location. 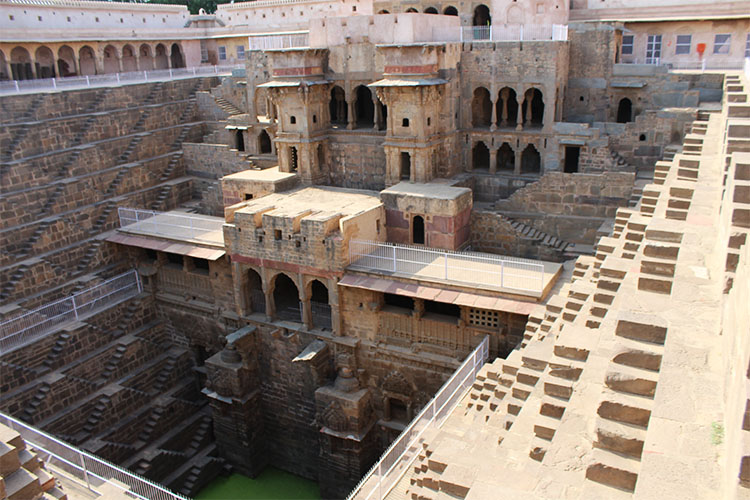 Chand Baori is one of the deepest and biggest stepwells in India. It is as old as 8th century AD and was built by King Chanda to solve the water scarcity problem in this region. The term Chand Baori means King Chanda’s stepwell and Chand Baori is simply astonishing 13 stories deep, and has 3,500 steps in total. I was challenged to enter and exit the stepwell using the same stairs, which is almost impossible since every single step in the Chand Baori is identical!
Chand Baori is in Abhaneri, a very peaceful village located just 95 km from Jaipur. Apart from Chand Baori, I have visited a total of 26 Ancient Stepwells across India, but the highest number of stepwells are in Rajasthan which is pretty arid.

Constructed in the 17th century, Raniji Ki Baori or literally “The Queen’s Stepwell” is a royal stepwell built by Queen Nathavati of Bundi for religious ceremonies. Bundi is an unexplored tourist destination in Rajasthan and is also referred as the “City of Stepwells” because there are around 50 stepwells in the city.
In Bundi, elephants are seen as a symbol of royalty, and thus, in Queen’s Stepwell, more than a dozen marble statues of elephants can be seen. In the last three centuries, Raniji Ki Baori has remained as a place of worship, and all the festivals in Bundi start from this beautiful Stepwell. A few other notable tourist attractions in this city are the Bundi Palace and the 84 cenotaph temples of Shiva.

Between Jaipur and Bundi, lies a small town that has a glorious but sad past. The town of Todarraisingh is famous for its beautiful stepwell, Hadi Rani Ka Kund that was built in 17th Century AD to commemorate the sacrifice of Hadi Rani, wife of the commander of Todar Raisingh, Ratan Chudawat. Ratan was a commander of a Rajput Army that was at war with the Mughal Emperor, Aurangzeb.

Just a day after Hadi Rani and Ratan Chudawat were married, Ratan Chudawat was ordered to march against the Mughal Army near Jaipur, but he was hesitating to leave his newly wedded wife. So to boost the morale of her husband, Hadi Rani sent her servant with a souvenir. It was her own head! Seeing this gory gift, Ratan Chudawat was filled with rage, and he fought bravely and won the battle against the Mughals. However, later he killed himself as he couldn’t bear the death of his wife and thus, the sacrifice by Hadi Rani was later honored by building a stepwell in Todarraisingh and it was named Hadi Rani Ka Kund.
Agrasen Ki Baoli