Although a quaint, sheltered, traditional village of the fishing community, Arambol is considered to be one of Goa’s most spectacular beaches. A short distance away to the north of this beach is a smaller area which surrounds a freshwater lake, beyond which is visible the hilltops of the distant jungle valley. However, this scene of idyllic bliss is not the only thing that Arambol offers its visitors.

From November through to March, Arambol becomes a melting pot of various different cultural experiences owing to the influx of several international tourists. For its distinctive Bohemian culture, Arambol has grown to be a site of artistic excellence and collaboration of several national and international musicians. The musical scene of Arambol is difficult to capture in words, for the crooning melodies at sunset combined with the sights of conceptual land art at certain junctures on the beach makes it an unparalleled experience. The rich musical heritage of Arambol mainly comprises Gypsy fusion bands.

The Arambol beach festival takes place usually over the month of February, and it can be best described as a kind of music carnival. It is frequently followed by a day long parade which was started several years ago by the American actor-comedian ZouZou with the purpose of creating a unique and culturally enriching experience.  A large section of the thousands participating in the festival are the musicians and artists themselves, who may be spotted several weeks in advance practicing harmonies or preparing art installations.

What makes this event incredible and unlike any other is the blending of the artists and the audience in close proximity, and the fact that anyone can watch the concerts free of cost. Usually the events which take place on the open beach require no prior tickets or bookings for attendance – one just has to show up in the afternoon on the cliff side of the beach. Hence, the crowd that attends the festival has a mixed audience – both those who are passionate about music and have come for a unique experience, and those who simply wish to watch the parade and enjoy a party.

The one-of-a-kind element of the Arambol festival lies in its participation. Hence, it is possible for tourists to take part in the musical performances and the parade without any hesitation. ZouZou the organizer is likely to be found in town in the days leading up to the carnival, and one only needs to seek him out for a friendly chat and a request to join the display. The beach festival brings together all kinds of people, giving them a chance to explore their creativity by helping to create the stage, or put up innovative banners, or simply decorating the area for the performances. 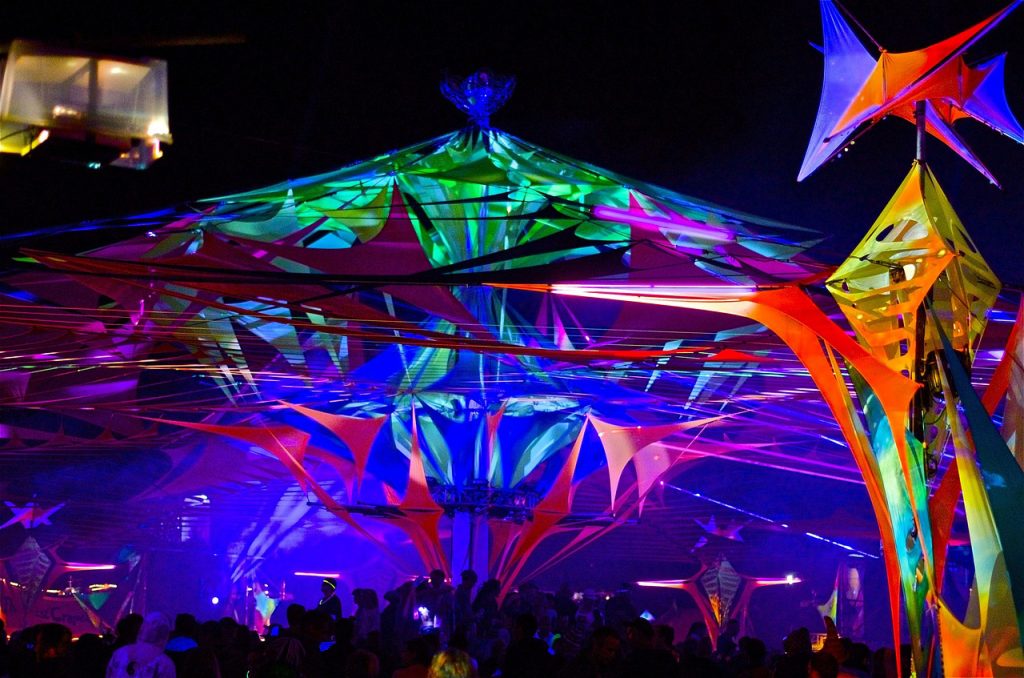 However, this is a voluntary community building exercise only and one should not hope to get paid for their labour. The true vibrance of the carnival is brought out in the expression of the hippie culture, following the concert involving both popular and lesser known musicians from around the globe. Another unique experience one should make sure to not miss is the after-concert party which takes place on the open beach, with live professional musicians offering their beats. Arambol musicians comprise a genre in themselves because of their uniqueness of spirit and musical ethics.

The signature style of these musicians is the crossing of genres and mixing of compositions. The regular Arambol Open Mic is held particularly for the purpose of allowing such music to flourish. Hence, it is not surprising to come across unusual tunes such as a mixture of Irish folk songs with Indian folk music, electronic looping of traditional Indian instruments, and gypsy melodies combined with the beats of hip-hop. The variety of instruments used, the quality of the song covers, and the originality of the music is mind boggling.

The musicians can be found at cafes and bars throughout these months rehearsing or playing to a live audience. The diversity of the artists is unbounded as one does not know what to quite expect in a concert involving Sufi musicians from the Middle East, Scottish singers, Arabian bands, French artists, and even Caribbean poets. This inclusive, special experience begins early evening with sundown as soon as an audience starts gathering arbitrarily on the beach. It is not unusual for a small instrument player to attract a crowd that steadily grows till the actual performance begins, while everyone enjoys a party with absolute strangers who are guaranteed to become friends after the experience of Arambol.