Blessed with fascinating beauty and majestic grandeur, the art forms of Karnataka have helped the state to secure a unique place in India. Situated in the southern part of India, the state shares its borders with the other states of Kerala, Goa, Andhra Pradesh, Telangana, and Tamil Nadu.

Karnataka is also home to the “Silicon Valley of India,” i.e, the city of Bangalore. The state is known all over India for its rich cultural heritage. It is one of the most sought-after tourist destinations in the country. Karnataka is also home to several monuments and places of historical significance. Which include Hampi, the capital of the ancient empire of Vijayanagara. The plethora of festivals and the rich tradition add to the beauty of the state.

From the urban city of Bangalore to the historically significant Hampi to the scenic and mesmerizing Coorg. It can be concluded that the state of Karnataka is home to some of the most fascinating places in India. The art, culture, and music of Karnataka are instrumental in portraying the diversity prevalent in the state.

The state is known for it’s distinct and culturally relevant art forms. The art forms of the state serve as a means to bring the communities closer. From the Yakshagana, which employs elaborate costumes, to the Chodi Ke Mela, which includes musical narration, the state has so much to offer an art lover. The art forms of the state are quite distinct from any other state of India. The difference is evident in their costumes, make-up, narration, dialogue, plot, and performance. Most of the art forms of Karnataka narrate stories from the Indian epics. The performances of these enthralling art forms usually take place during festivals, fairs, and other such special occasions. The festivals in Karnataka culture are quite colorful, splendid, vibrant and are sure to lift the spirits of the observer. The tranquility and the spirituality of the state reign supreme in its art form too.

A traditional art form of Karnataka, Yakshagana, is the most popular and the most significant art form of the state. It is said to have originated four hundred years ago and used a unique technique of narration. The word “Yaksha” refers to celestial beings, and the word “gana” refers to the song.

The performance comprises a combination of music, dance, elaborate costumes, and face painting. A Theatrical Art form, Yakshagana, has secured the pride of place among the other art forms of Karnataka. It mainly narrates stories from the Indian epics.

The lively performance of the Yakshagana usually takes place during the night-time. It is accompanied by the background music, which adds to the thrilling ambiance providing a unique experience to the viewers. The art form is generally performed during rainy seasons. It thus serves as a means to uplift the spirits.

Dollu Kunita is an energetic and vibrant dance form that is widely prevalent in the state of Karnataka. This art form is usually performed in honor of Lord Beereshwara. The performers move in quick-paced steps in a circular fashion while beating their drums. This produces a unique kind of music that is perfectly in tune with the mode of the performance. The synchronization of the movement of the performers with the music produced is one of the highlights of the performance. The performance is highly dynamic. It provides a thrilling and enthralling experience to anyone who would witness it.

Goravara Kunitha is another popular art form in the state of Karnataka. To perform this art form, the performers dress in vibrant and attractive costumes. The dancers performing in perfect synchronization with each other would mesmerize the viewer.

The dance is said to portray the hidden animalistic characteristics of human beings. The art form is esteemed and widely performed during festivals, fairs, and other special occasions. 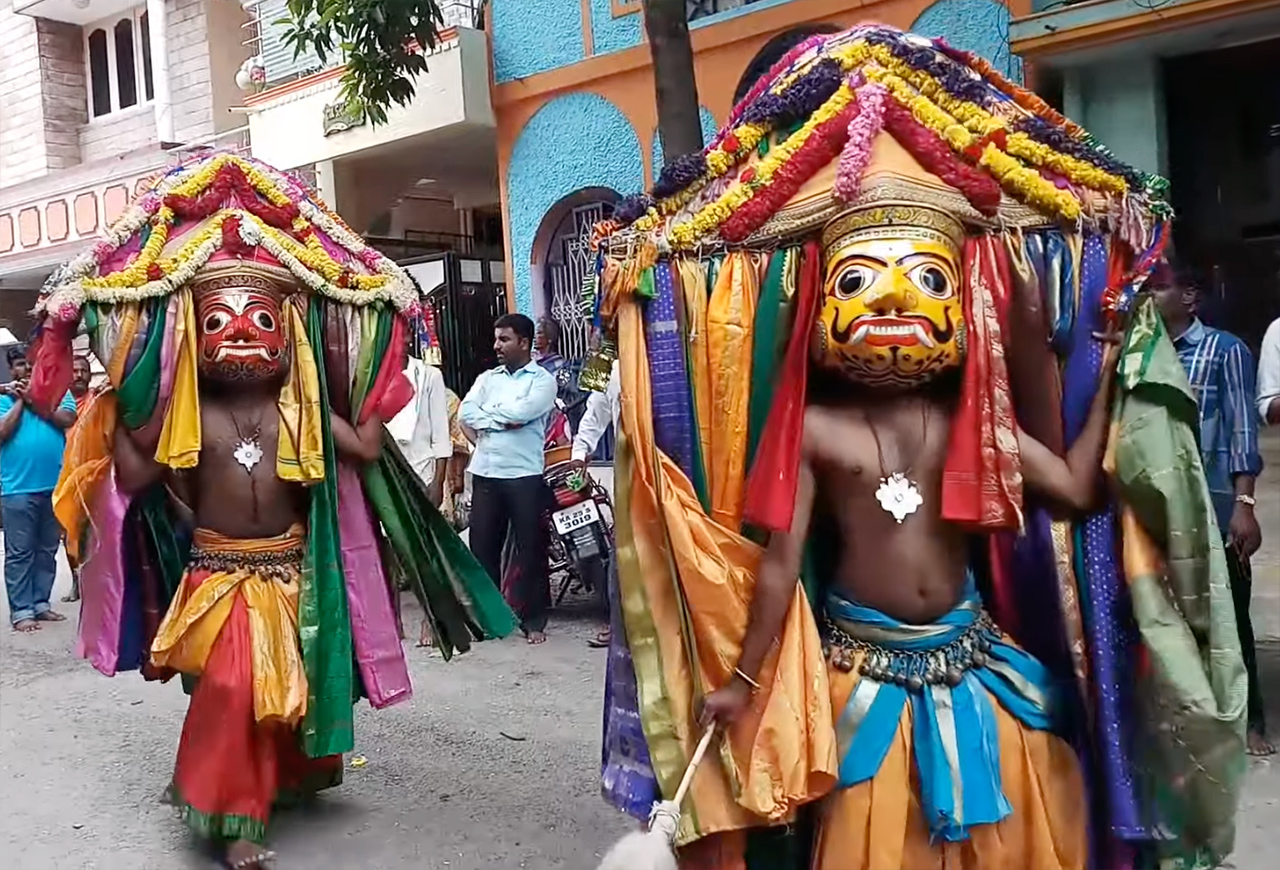 A very unique and enthralling art form of Karnataka, Somana Kunitha is a symbol of the rich heritage of the state. Usually performed by two or three men, the performers wear elaborate costumes, a large mask, and huge headgear as they perform the dance.

The dance is performed in villages and is said to possess the power to protect the village and keep away all the evil spirits. 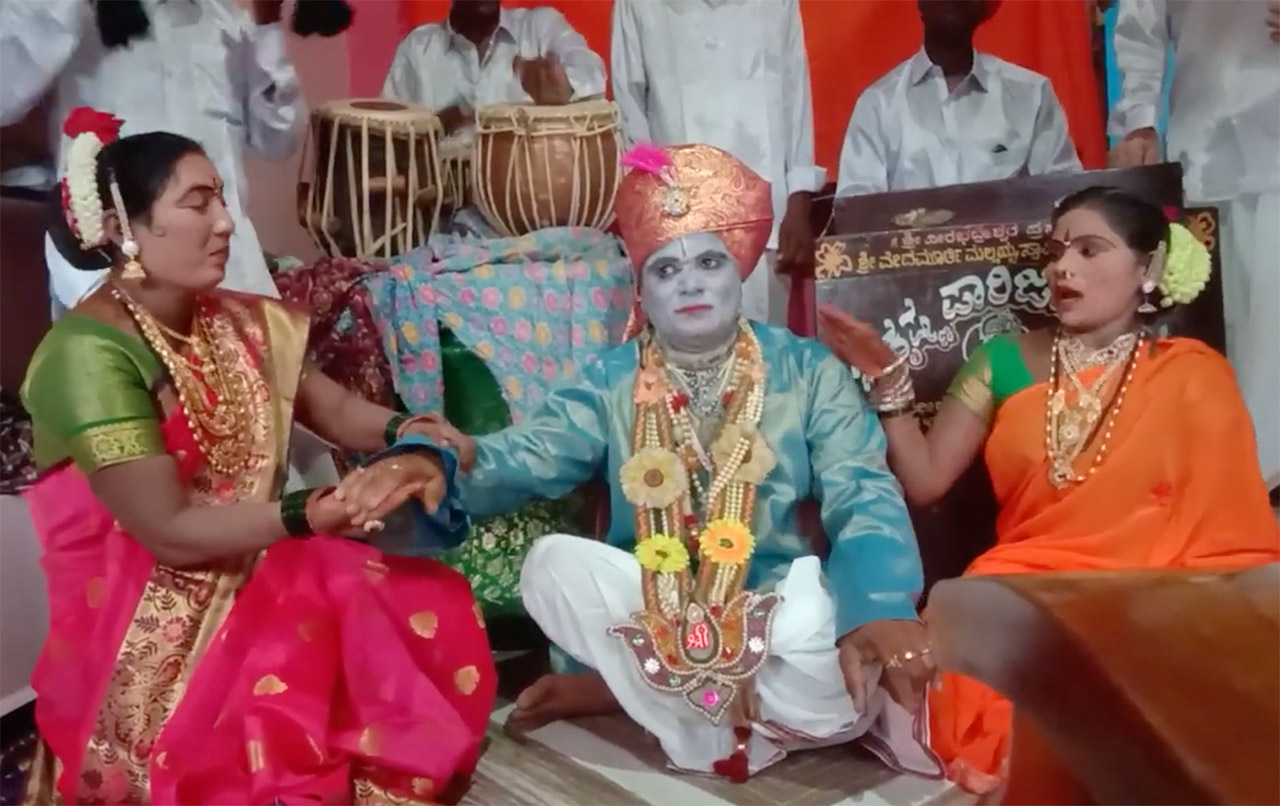 Krishna Parijatha is a fascinating theatrical art form and is most popular in the northern part of Karnataka. The folk art narrates the adventure of Lord Krishna and Lord Indra and is quite popular throughout the whole country.

The performance of Krishna Parijatha usually takes place in open-air theatres. This provides the actors ample freedom to improvise while on the stage. Along with the vibrant and distinct costumes, Krishna Parijatha has the capability to enchant the viewer with its powerful performance. Moreover, the simple dialogues and the exciting plot add to the charm of the performance. 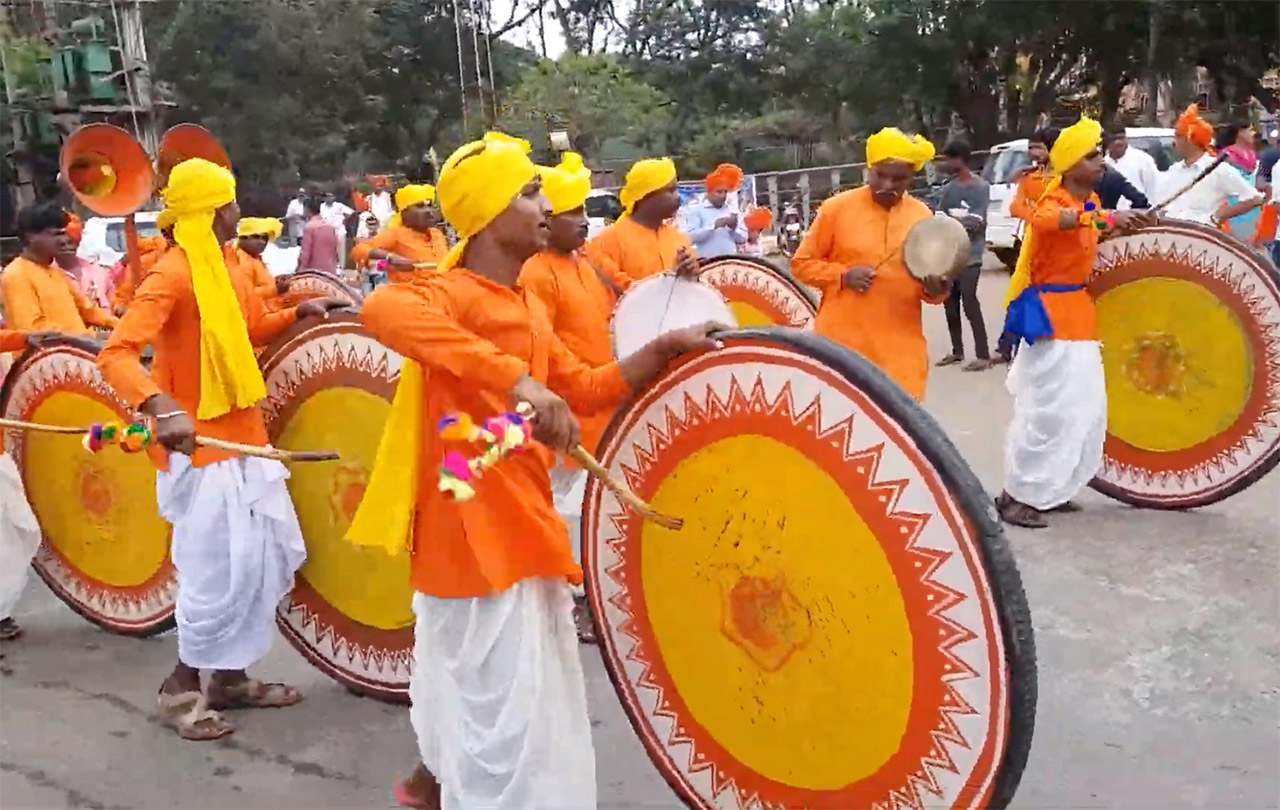 The main instruments used for the act of Jagghalige Kunita include the wheels of the bullock cart wrapped in buffalo hides. The performance is quite energetic and sets the mood for the festival.

Kamsale refers to the musical instrument, which is made of brass and is used in the performance of the art form of Beesu Kamsale. The dance is performed with rhythmic and synchronized movements of the performers in tune with the music. This art form requires the performer to have intense training and concentration to present a powerful performance. 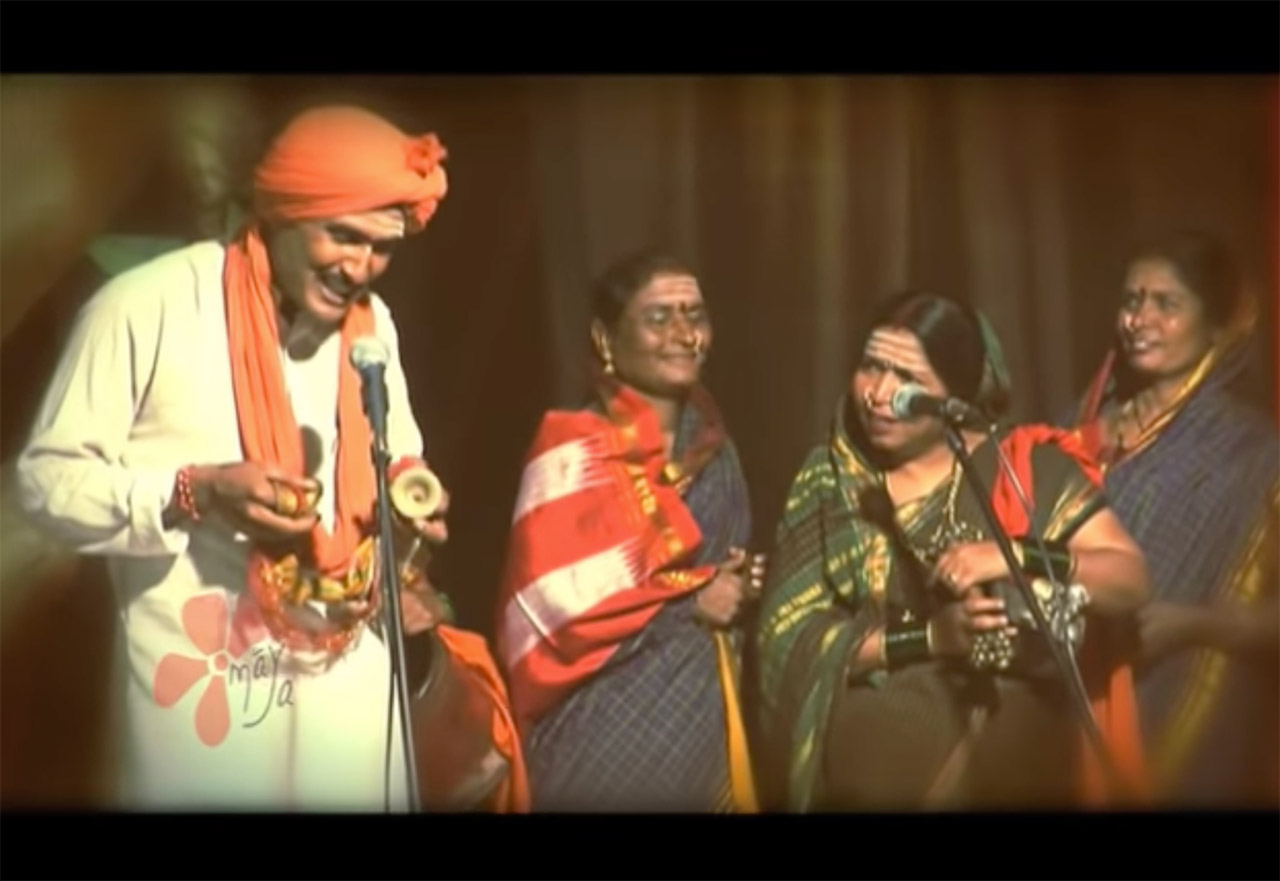 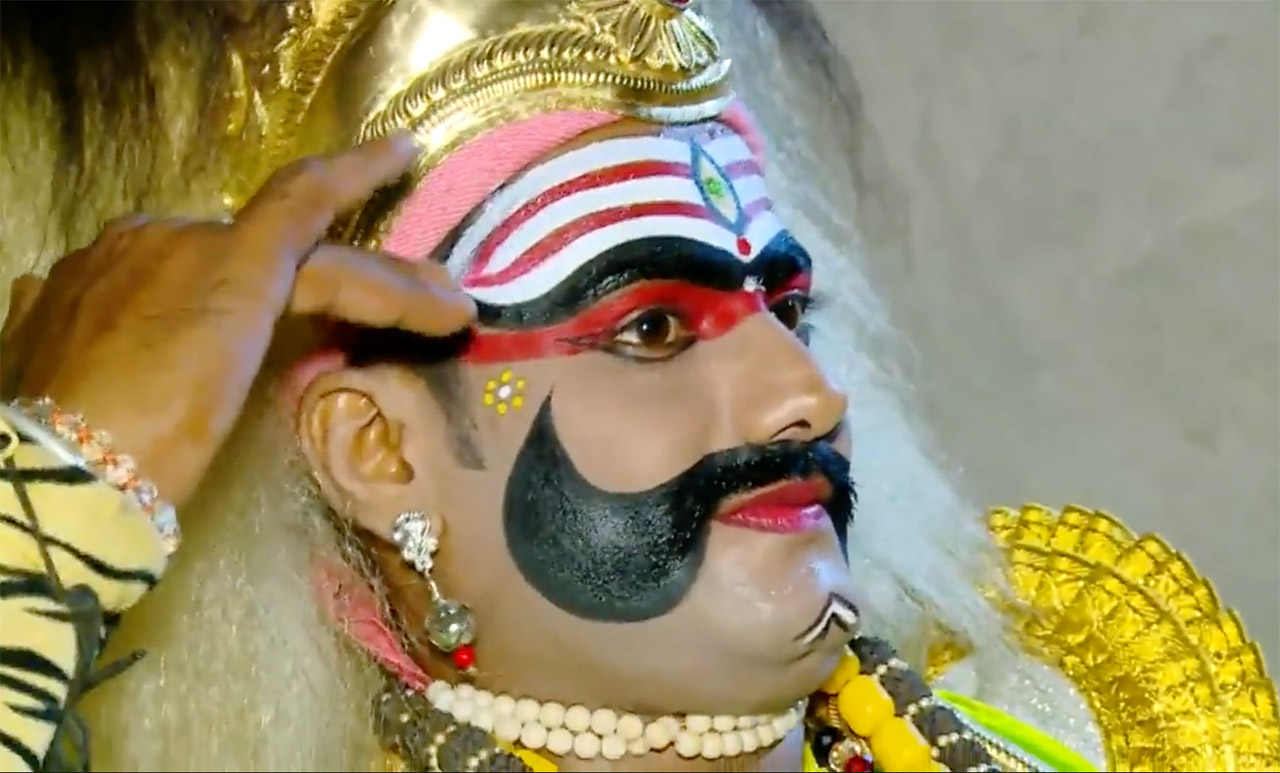 The Veeragase is a traditional dance form of the Hindu religion performed in the months of Shravana and Karthika to worship their gods . The dance got its name from Veerbhadra, a Hindu warrior from the state of Karnataka. It is a vivacious and lively folk dance, often presented during the Dasara festival procession which is held in the streets of Mysore. The devotees of Lord Shiva, who perform the Veeragase dance, are known as Lingadevaru. The performers wear extravagant costumes which include headgears, a Rudraksha mala and a hip belt of several gems.

In Bootha kola, Bhoota signifies ‘spirits’ and Kola means ‘play’ in Tulu. It is fundamentally a spirit worship ritual celebrated by Tulus in Karnataka and a few regions of Kerala. These spirits shield the town from calamities and make them prosperous. It is accepted that the outrage of these spirits brings misfortune. The ones adored are Panjurli, his sister Varthe, Kalluri, Kalkuda, Kordhabbu, Guliga, Jarandaya, Bobbarya, etc. There are stories that depict their bravery and how they came to be worshipped. These spirits are neither virtuous nor awful. Kola is additionally called ‘nema’ which implies ceremony, which continues from dusk to dawn. 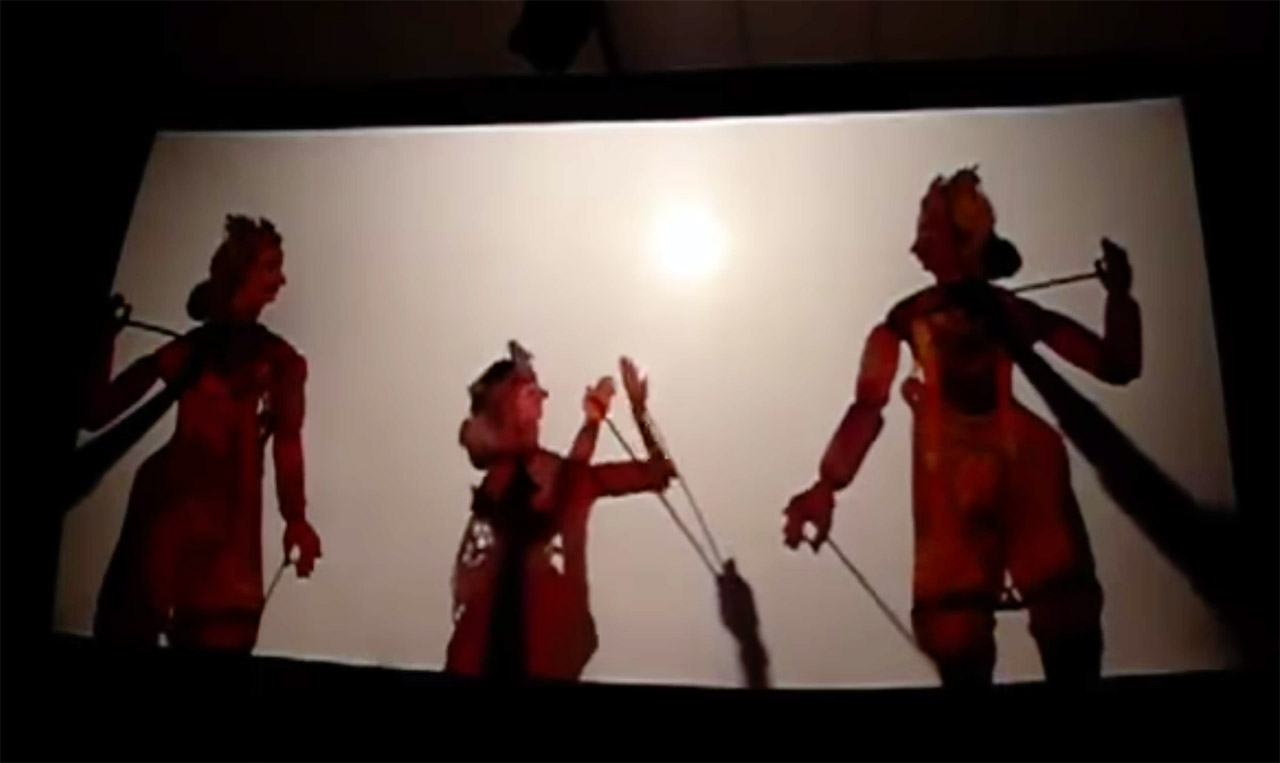 Gombe Aata (play of dolls or Puppet show) is a distinct type of skill native to Karnataka. Gombe Aata includes narration using characters made from dolls, who are conducted by people in the background using undetectable strings. Made of wood and dressed with silk cloths, puppets are key elements of Gombe Aata. The puppetry ordinarily showcases minor plots from sagas like Ramayana, Mahabharata or different puranas/old stories. A Gombe aata show incorporates music and narration, with puppets moving around in front of an audience, as commanded by the puppeteers. They perform activities like embracing, bowing, folding their hands, etc.

Huli Vesha (otherwise known as tiger dance) is performed to honor Goddess Durga and her sacred animal, the tiger, during navratri. Huli Vesha performances usually include a troupe of dancers clothed in tiger costumes, tiger face masks or face paintings, tiger stripes on the body and yellow or orange hued shorts. The group proceeds onward to the central streets of the town, joined by drums and music, engaging general citizens and at times gathering contributions from whoever offers the same. During the dance, they take several intervals to play out certain tricks and stunts to keep the crowd more engrossed.

Though the art forms of Karnataka differ widely from each other concerning their mode of performance. They all have one thing in common, the power to mesmerize the audience. Anyone who witnesses these art forms would surely be left enchanted by the charm and beauty of the performance.

Through their incredible art forms, the state has succeeded in preserving its rich culture and varied heritage through centuries.

It is very true that everything has a story to tell and so does the traditional houses of Kerala that are designed in a much calculated way and have been presented in the most beautiful format that are not only luxuriating to live in but also give us a glimpse of the intelligence that has gone in their construction by some of the most brightest minds.
Read more
Art & Culture

Chitrakathi Painting of Karnataka: The Hidden Treasure That Need Efforts to Preserve

Native to the parts of Karnataka Chitrakathi Painting is still practised and is nurtured with great joy over there. Paintings depicting scenes from the great epics like Rmamyan and Mahabharat are the ones that are widely praised.
Read more
Art & Culture

Culture of Rajasthan remains engraved in the comparatively modern lifestyle of people. Great dynasties like those of the Rajput and the Marathas have contributed to the diverse and rich history of the state.
Read more
Art & Culture

Here is taking a look at some of the traditional martial arts of India. Each of these is not only a holistic art form on its own, but also, is reflective of practices of its place of origin. In other words, these martial arts are rooted in the culture of the land from where they come.
Read more
Art & Culture

Urdu language continues to be an integral part of the Indian culture and linguistics. It is widely spoken in many parts of the country. Some of the states where it is predominantly spoken include Uttar Pradesh, Madhya Pradesh, Andhra Pradesh, Telangana, Karnataka, Maharashtra.
Read more
Art & Culture

The beautiful art forms of Tamil Nadu in India is aptly represented through its culture. The rich heritage and history is embedded deep in the hearts of Indians.
Read more