One is lost in the days of India’s longest social revolution spearheaded by Dr. Ambedkar when one hears Wo baat karo paida tum apni jubano mein (Let your tongues narrate those tales) by Prakashnath Patankar. Years old, the tunes of the qawwali still beat in the hearts of Ambedkarites.

This social struggle has indeed left a staggering legacy behind. However, hardly anyone, during Dr. Ambedkar’s time, might have imagined that the movement will one day find a place not just in the pages of history books, but also in songs, qawwalis, and gazals – that commonly came to be referred to as Bhim Geets, literally, songs composed on Dr. Babasaheb Bhimrao Ambedkar. As a source of a historical movement, today, Bhim Geets narrate those unsung tales.

Historically, the roots of this cultural practice can be traced to the period of Satyashodhkiya Jalsas prevalent amongst the anti-caste activists of Western Maharasthra between the late nineteenth and early twentieth century. Based on the social literature of Mahatma Phule, these Jalsas were pioneered by poets like Bhimrao Mahamuni. Gopal Baba Walangkar and Kisan Faguji Bansode were other notable activists who used them as a form of resistance in the social movement.

In Dr. Ambedkar’s era, Bhimrao Kardak evolved Bhimrao Jalsa, and continued the tradition. While, in the post-Ambedkar era, Ambedkarites like Kerubuva Gaikwad, Wamandada Kardak, Shahir Vithhal Umap and Prahlad Shinde intensified the use of such compositions – shayaris, geets, and qawwalis.

It was in 1965 that the first such composition in the form of a song was released by HMV. Music enthusiasts and vocalists amongst Ambedkarites now saw an opportunity to leverage their artistic skills to carry ahead their saviour’s legacy. They created, economically, an income source and artistically, a new genre. Slowly the trend assumed a vigorous form, especially in Maharashtra, and steadily spread to other parts of India.

“With time, Jalsas and Shayaris underwent many transformations and adapted to contemporary styles. However, the radical element was intact. The contemporary forms of Ambedkarite songs – Bhim Geets – are products of pre-Ambedkar era Jalsas,” notes ethnomusicology researcher Sagar Chakranarayan.

Bhim Geets revolve around different facets of Dr. Ambekar’s life. This covers right from his childhood and struggles to pursue education, his social revolution, the struggles of his pious wife, Ramabai to his embracing Buddhism.

For instance, Soniyachi ugavali sakaal by Pralhad Shinde gives us an account of the birth of Dr. Ambedkar. Motha jhala shikla savarla, sandipa mag pudhe to tharla, jirna rudhicha karjankaar, janmas aale bhim bal (Growing up and becoming educated, he proved to be a lamp for his society; an iconoclast, a nemesis of orthodox traditions, Bhima was born) goes the song, describing how Dr. Ambedkar proved to be a trailblazer in the social movement.

There is no dearth of songs that eulogize Babasaheb Ambedkar, as various accounts associated with his different social ventures create the scope for artists to come up with unique compositions. Sparshile tu onjaline, khule kele paani chaudar talyache, hakka deun mansache kele sone piditanchya jivnache (Dipping your cupped hands, you opened the Chaudaar tank; by giving rights, you emancipated the lives of your depressed people) sings Adarsh Shinde.

Like every other Bhim Geet, this too has a deep meaning. Reading between the lines, we find how mere few words cover the mammoth account of the struggle that was launched to gain social rights. Finally, the song has been supplemented with Dr. Ambedkar’s iconic slogan, shika, sanghateet vha aani sangharsha kara (educated, unite and agitate), before it ends hailing Ambedkar as Bhimraya, literally the lord. 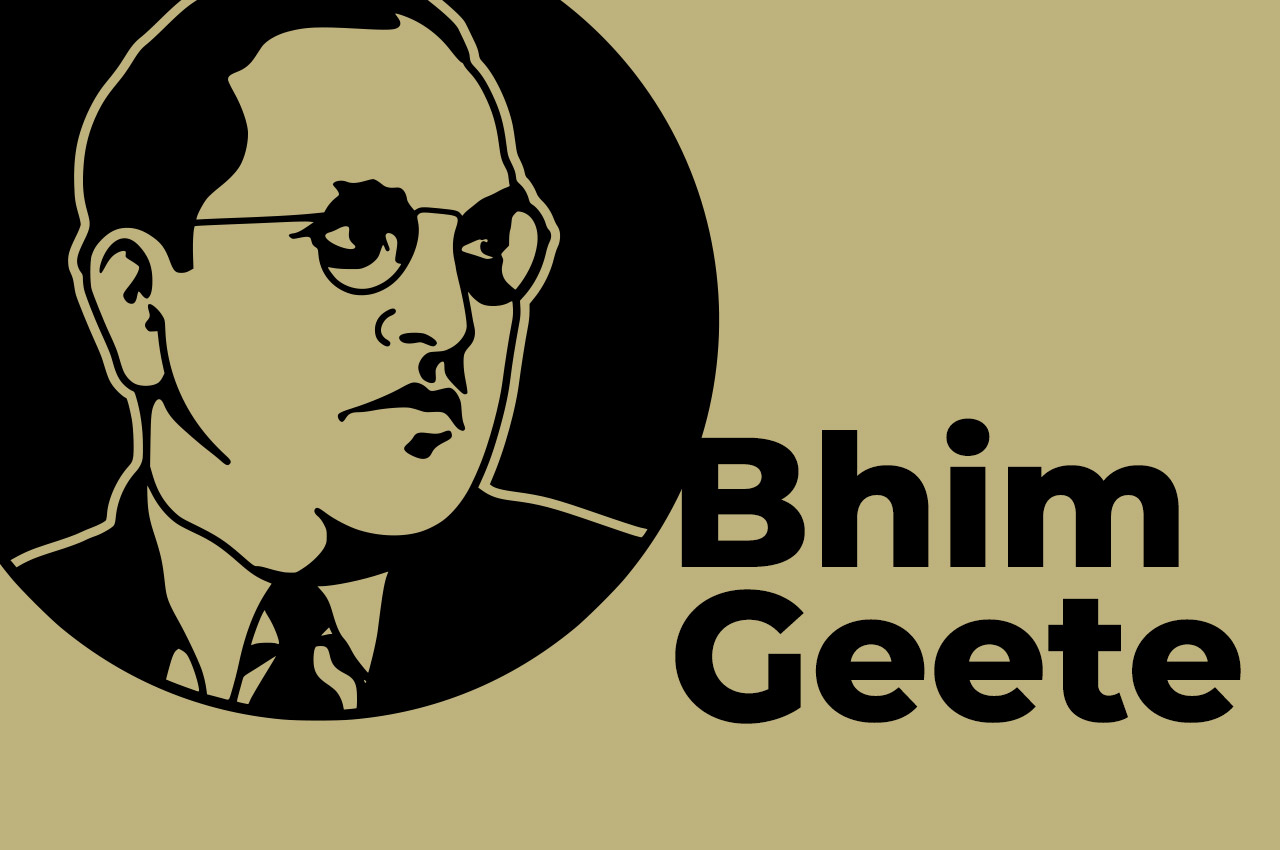 Babasaheb Ambedkar’s life is incomplete without the mention of Ramabai. Her contribution to his movement was invaluable. Bhim Geets don’t miss capturing her story; in fact, songs composed on Ramabai’s life are the ones that give you goosebumps. You can empathize with the struggle of a wife whose husband had completely devoted himself to a social cause. Nahi keli aasha sonyachi, kari chinta sada dhanyachi… Rama upvashi rahali, din dalitanchi mauli, nav kamvila shraman… (She was never attracted to material pursuits and always prayed for her spouse’s welfare… Rama, the mother of depressed masses, went without food and made her name with her labour and toil…) recounts Majha bhimacha navana kunku lavila Raman by Sushma Devi.

When we analyze this song, we find that despite Ambedkar earning degrees and doctorates from the world’s renowned universities, Ramabai didn’t harbour expectations like a common wife. She knew that their lives were meant for the welfare of their people, and the education her husband had pursued was not for their own individual benefit, rather it had a greater social purpose. Bhim Geets, thus, let us beautifully understand the noble and magnanimous mindset of the social revolutionary couple.

In a way, these compositions combine art, history, and sociology; and listening to them, we do not realize when the artists turn up as historians.

By keeping the oral tradition alive, Bhim Geets are conveying Dr. Ambedkar’s message and work across generations. They implore youngsters to imbibe the Ambedkarian virtue, like the meaning Anand Shinde’s Tujha rakta madhla Bhimrao pahije (Need the Babasaheb in your blood) delivers. With a broad message, it asks them to pursue higher education, consistently seek growth opportunities, and lend their hands towards the upliftment of the socially backward.

An initiative of humble souls, Bhim Geet is an epitome of using arts as a medium for bringing a social change. It’s like an insurmountable tide that is constantly surging ahead, as Wamandada Kardak’s Me wadal wara captures. Me Wadal Wara… Vishamtela khaara tithe jato majha bhara… (I am the storm that breaks the shackles of discrimination…). It is an artistic force that will keep resisting and bringing turnarounds, so that equality pervades our social spheres.