Chennai & London Have More in Common Than You Think

The two cities, at the distance of a night-long flight, are together home to more than 15 million people of the world. Their geographies are different, their accents, their beliefs, the infrastructure, even the air. But somehow we know there are flaws in the previous statement. So, in this article, we explore as to why Chennai shares a commonality with London that no other Indian city does? 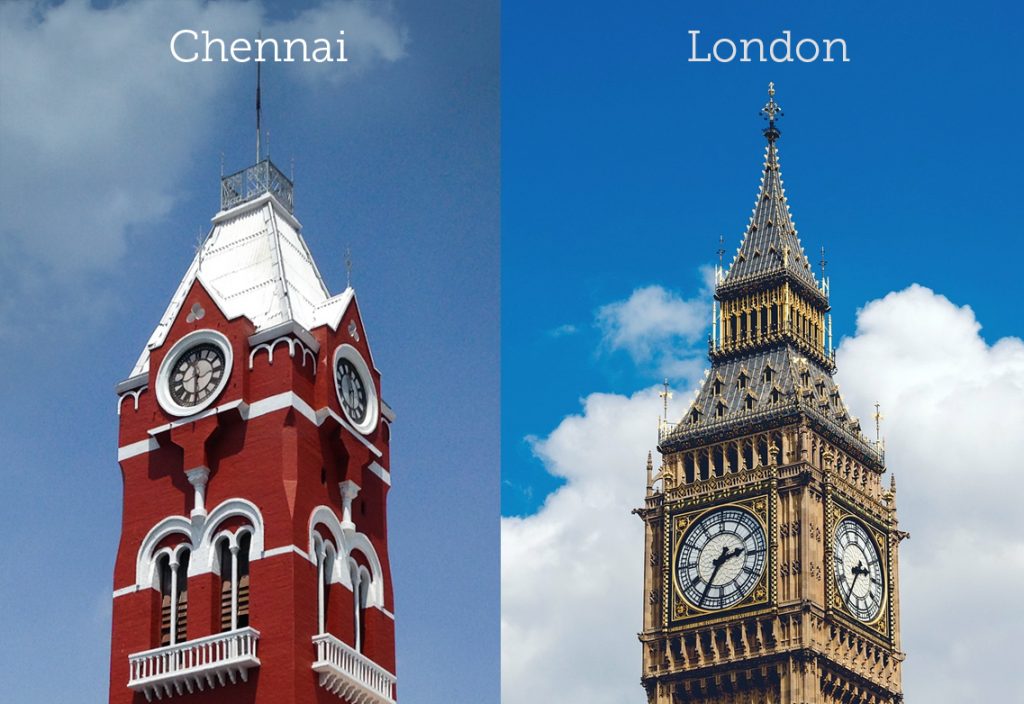 London and Chennai are both sanctuaries of diverse ethnic groups and cultural minorities. 44% of London’s populace is comprised of ethnic minorities. Chennai also has more than 13 such groups. Interestingly, Chennai also has a small increasing Japanese population of around seven hundred. Although this is very small compared to London’s Japanese community, it is in sharp contrast with any other Indian city, and a similarity nonetheless. Also to be considered in this regard is the sizeable population of Indian Tamils in the English Capital.

It will seem overly redundant to mention London’s English heritage, so we’re skipping that. But importantly interesting are Chennai’s English roots. Although many Indian cities evolved under the British, Chennai is special. The present day modern city has grown to its present from Fort St. George. The fort- set up in 1644- has the distinction of being the first English settlement in India. Located in an ancient fishing village, it worked as a factory for processing cotton textile. Initially, the European migrants worked in the factory and lived within the building. Gradually, the place took on a name very descriptive of its inhabitants- the ‘White Town’.

A Tale of Caffeine and Curries

Located in countries where tea is the favoured, these two cities are keeping the torch burning for coffee. In london, 80% of the adult population drinks coffee on a daily basis; that’s more than three million people. Chennai too loves its ‘Filter Kaapi’- a gift of the colonial period- that is now an invariable part of Chennai’s cultural character. Tamil Nadu accounts for 40 percent of the coffee consumed in India and its love for the filtered joe is only increasing.

Another common cuisine member is the curry. From the Chettinad Chicken or the Kayi Korma, both cities have their favourites. Londoners even host the ‘British Curry Awards’, which says nothing but about their love for the Indian-origin dishes.

London loves Tennis, it has grand slam to show for it; also the yearly 38000 kilos of strawberries and cream. Chennai also harbours an open love for the sport. Until this year- The Chennai Open, an ATP 250 event- was held in the city. The coastal city has produced many world-class racqueteers like Mahesh Bhupati and the Amritraj Brothers. One of the brothers, Vijay Amritraj, starred alongside Roger Moore in the film Octopussy- as an ally to the famous Londoner James Bond! After this, how many more connections could one ask for?

Love in the Air

According to DGCA statistics, more than 120,000 people travel between Chennai and London every year. The traffic is multiple times higher than any other destination in Europe or the Americas. This can only mean one of the two things, either Chennai people simply love London, or maybe that they love an aerial tour of Europe. We somehow think it’s the first.