Embroideries of India – Showcasing the Skills of Regional Artisans

‘A stitch in time saves nine’, goes a popular saying. But what if a stitch also saves the cultural heritage of generations, showcases the skills of a particular region, and beautifies garments across the nation? Yes, we are talking about some of the finest embroideries and stitches that have withstood the test of time and emerged as local fashion icons. Most of these continue to be in use and are often flaunted at fashion shows and adopted by leading Indian designers.

Regional Variations in Embroideries of India

Due to the vastness that comprises India, the regional and traditional specializations are also seen in embroideries, as much as they are seen in other social and cultural aspects, such as, language, festivals, cuisine, and local ingredients.

Most regions or states have their particular style and craft of popular embroideries. The skilled laborers who are masters of embroidery art usually have this art form passed on from generations. The fact that these artisans are common people who are usually always away from the limelight is no new news. Unlike celebrity artists in various fields, the craftsmen who embroider are rarely known. They are usually the nameless and faceless assets that create the priceless wear adorned on various occasions by people.

There are many specific embroideries of India, such as the Chinkankari, Kantha, Aari, Gota, Kutch, Phulkari, Shisha work, Zardosi, and many more. Here is taking a look at some of the most popular embroideries of different states and regions.

From the land of Lucknow, this form of embroidery is said to have been introduced by Nur Jehan, the wife of Jahangir. It is the usage of white thread over the fabric which is block printed for patterns. The petite and elegant look of the design is used on kurtas and other garments.

Punjab is known for this amazing embroidery pattern of flowers on their fabrics. Stitches are embroidered on the back of cloth as the design unfolds in front. Bright colors are usually used over lighter fabrics and this form of Phulkari embroidery has been practiced primarily by the women of the community.

Practiced in West Bengal and Odisha by its rural women, this is a running stitch done along with the patterns. The simplicity of the work gives the garments an exclusive look. Also, it is often known as dorukha because there is no front or backside, the design looks the same on both sides. Kantha embroidery is not only used on garments but quilts, napkins, and so on.

Hailing from Rajasthan, particularly in Jaipur, the Gota designs look similar to zardozi. Zari ribbons or gold threads are used to create patterns. The designs are of human figures, animal figures, or various shapes which are cut and then stitched on the material making it an applique with the usage of gold threads. Karchobi is another form of embroidery in Rajasthan that uses metallic zari threads.

From the breathtaking land of Kashmir is Kashida, an equally beautiful Kashida embroidery that uses bright colors and myriad motifs. Found on shawls, bed sheets, sarees, Kurtis, and many more, the designs vary from animals, fruits, flowers, and so on. The Raffugiri embroidery is a branch of the Kashida and looks the same on both sides of the cloth.

The region of Kutch is home to some of the best handicrafts and embroideries. The different types of embroideries of Kutch include the Sindhi stitch which is geometric, as well as the Aribharat where a hooked needle is used for creating the chain stitches. Some other embroideries which are from Gujarat and the Kutch region include the banni, rabari, and Kathi. 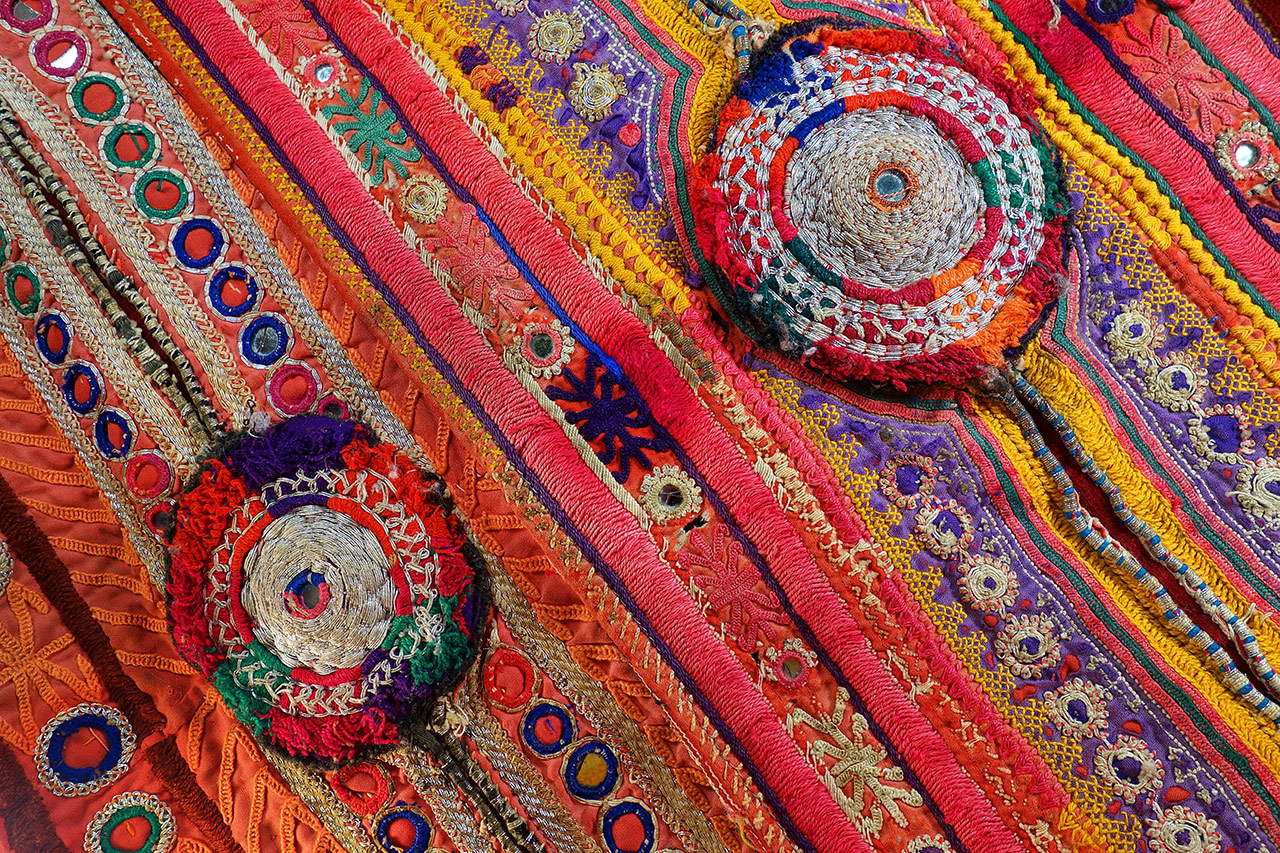 This embroidery cuts across state lines and is practiced in Gujarat, Rajasthan, and Haryana. Little pieces of mirrors are embroidered on the fabric to give the cloth a unique look. Mirror work is also usually found on cushion covers, wall hangings, bags, and other accessories.

Aari work involves the usage of usually silk threads to create loops and patterns outside or on the edge of the material. Practiced in Kashmir and the Kutch region this is an arduous technique that gives amazing results. Aari works are done by using a special long needle and a loop and hook method that requires skill and practice to master.

The Kasuti embroidery is popular in Karnataka but is also found in the Kanchipuram saree designs. The patterns include animals, lamps, palanquins where the stitching is done by counting each thread. The process is tedious and the embroidery is without knots giving the same look on both sides of the cloth.

Perhaps the best known and most luxurious embroidery of India is the zardozi. Earlier real gold and silver threads were used on silk and velvet fabrics to make the garments fit for royalty. Nowadays, the zardozi thread is made of metal wires and is still considered one of the richest and elegant looking embroideries.

There are, of course, many more embroideries that are practiced across the length and breadth of the country and that add life to plain fabrics and garments.