Tamil Nadu for me is the land of the malli poo (jasmine), pavadai-dhavani (half-saree with skirt) and idli-sambar. Dindugal pootu (locks), Sivakasi pattasu (crackers), Chettinad kara kozhambu (spicy gravy), Madurai malli and Kumbakonam degree coffee are some of the other things that are famous. In fact, the state you see today might be very similar to the one that Marco Polo had seen with nary a change in culture. There are a variety of things in Tamil Nadu which have celebrated their millennium with pomp and splendour. 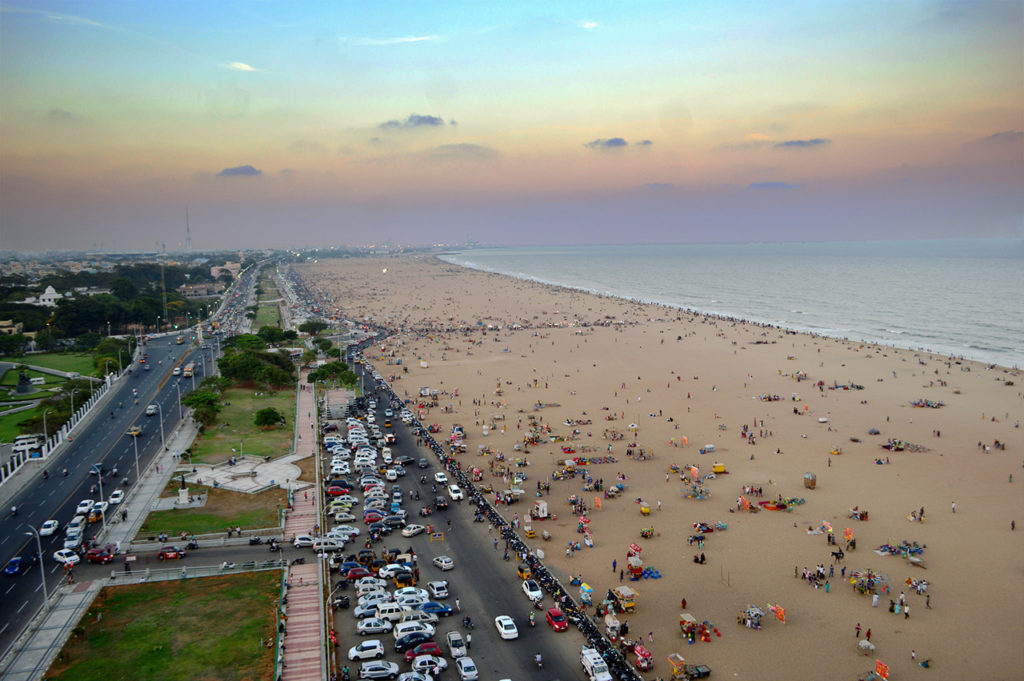 Some of the oldest and largest temples reside here. The sculptures, inscriptions and paintings on their walls and ceilings remain proof of their antiquity. Every generation that followed has played a part in preserving the culture. For instance, the year 2014 marked the 1000th year of King Rajendra Chola’s coronation. Considered the greatest Tamil king ever, his kingdom extended from the plains of the Ganga in the north to Srilanka in the south. His famed navy conquered several south-east Asian kingdoms in Indonesia, Cambodia, Thailand and Malaysia. To commemorate the anniversary, the Tamil Nadu government joined hands with the Indian Navy and National Maritime Foundation to launch the training ship INS Sudarshini on a cruise from Chennai to Nagapattinam, which was an important naval base. 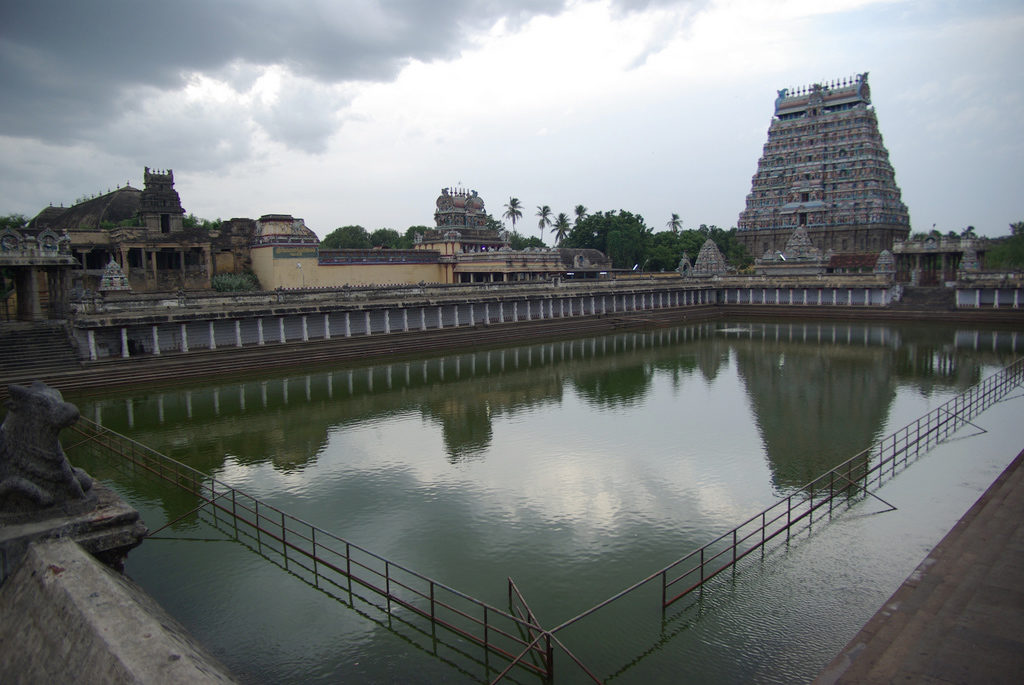 Any discussion on Tamil Nadu would be incomplete without the four feuding kingdoms of the Cheras, Cholas, Pandyas and Pallavas who ruled over the land. Despite their internal conflicts, they enriched the art, architecture, literature and culture of the region. Cities like Madurai, Thanjavur, Tiruchirapalli, Tirunelveli and the Chettinad region have felt the influence of the Cholas and Pandyas in one aspect or another. Similarly the northern parts like Chennai, Kanchipuram and Vellore show significant Pallava influences, just as areas along the west bear the stamp of the Cheras. These dynasties, along with the Vijayanagara, Hoysala and Nayak rulers, have left their mark all over the state.

Tamil Nadu as a whole is synonymous with its many temples. Religion and spirituality are very much a part of life. Temple visits are a daily activity, for divine blessings certainly but also for the equally divine prasad. A scoop of piping hot pongal, a dollop of panchamritam, a glass of Amman koozh or kanji, flavourful sundal or that evergreen Vishnu temple staple – the puliyodharai (Tamarind rice), have people (including me) waiting in long queues.

Rice is the staple food here and Tamilians indulge in its varieties and different forms. The batter for idlis and dosas is made of rice. Pongal, upma, idiyappam, sweet meats, vadams (spicy sundried crisps) and appalams are all made from rice. The Tamil culture strongly believes in treating guests with great honour and pampering them. A delicious spread is laid on a banana leaf and the meal begins with payasam (kheer). Appalam, vadai, pickles and sweets join in. To paraphrase the Thirukkural- Fortune smiles on those who host their guests with a smile. I guess that’s why the land and culture of the Tamils have prospered.

Present-day Tamil Nadu can be broadly divided into four regions, more or less similar to those in ancient times. 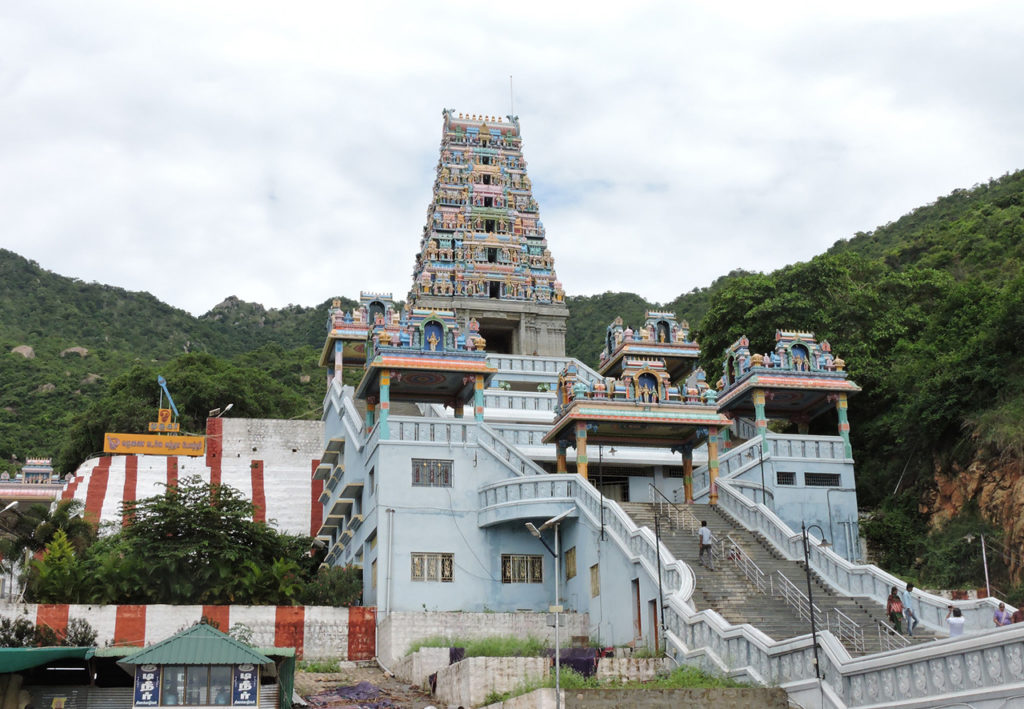 Kongu Nadu consists of the areas in the west around the Nilgiri hills and cities of Coimbatore, Tirupur, Erode and Salem. The region shares geographical features with parts of Kerala and Karnataka, with which it shares borders. Textiles, mining, and agriculture are the main industries here. Coimbatore is known as the ‘Manchester of the South,’ for its flourishing textile industry. Tirupur ‘banyan’ or vest is a famous product. Knitwear garments from Tirupur are popular everywhere and exported worldwide. Salem, famous for its lip-smacking local variety Malgova, generates a huge income to the state through its extensive handloom industry. It is also the steel city as the home of a SAIL steel plant.

The Kongu region sees the convergence of the western and eastern ghats. Therefore, there is no dearth of picturesque locales. Apart from Ooty and Kodaikanal, there are Yercaud, Hogenakkal and Kolli Hills that are popular as summer getaways. The invigorating air pervading the lush tea plantations and the scenic surroundings interspersed with waterfalls and lakes make these places ideal vacation spots. Kollywood loves to shoot its movies in Pollachi and other locations nearby.

Natives of Kongu Nadu are traditionally tradesmen and landowners. They speak a distinct dialect of Tamil called Kongu Tamil. Several ancient tribes such as Todas, Irulas and Badugas inhabit the hills and even now retain their culture and way of life. 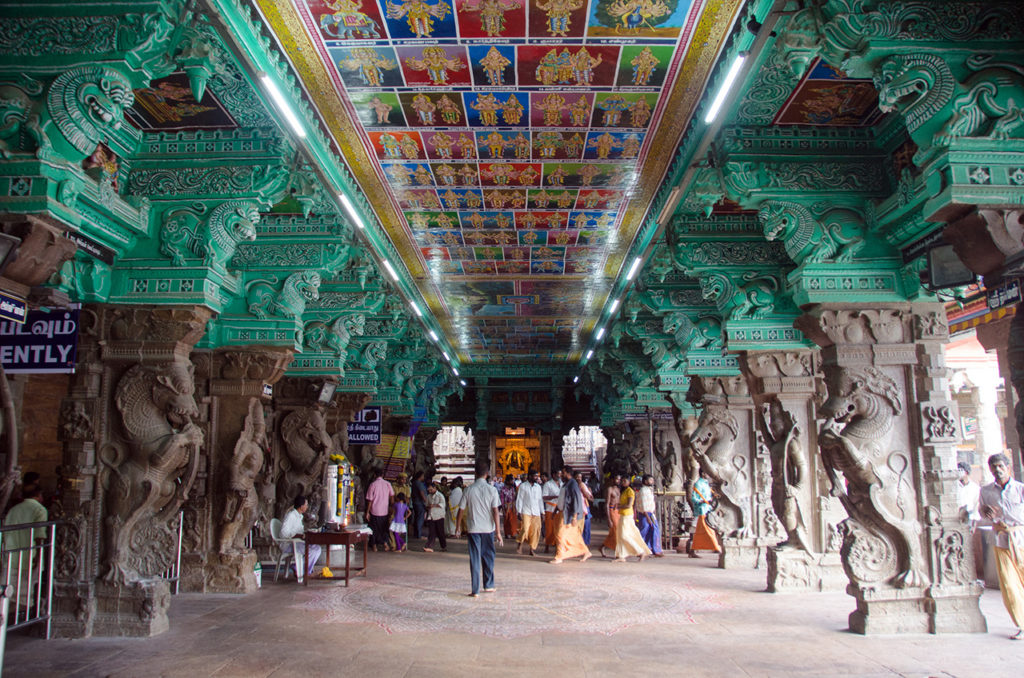 Madurai, Tirunelveli, Theni, Sivagangai and Ramanathapuram form the core areas of the Pandya empire.The Pandya identity continues to define this area. In later years, the Nayaks and several minor dynasties dominated this region.

The Meenakshi Temple, which is the honour of Madurai, stands majestically wearing its age with pride. Tamil literature has mentioned the temple since antiquity. The old temple was destroyed when Malik Kafur invaded the south. Later, the Nayak rulers rebuilt and restored it in the 1620s.

‘Elei! alwa thinutu po lei!’ (hey eat some halwa and go). This dialect of Tirunelveli has a distinct ring to it. The halwa is a delicious secret of the city. It melts in your mouth. Its other name Irutukadai (dark shop) Halwa came about because it was popularised by a dimly-lit shop. Further, the waters of the river Thamirabharani is believed to give the halwa its divine taste. 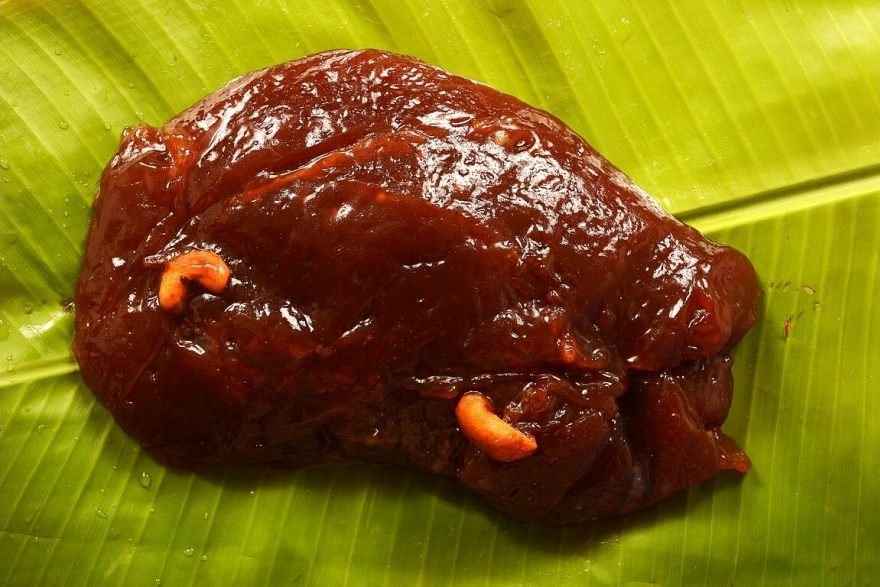 Tirunelveli also gave Tamil Nadu some of its most famous cultural icons such as freedom fighters Kattabomman, V OChidambaranar and the poet Subramania Bharathi.

While speaking of Sivaganga and Ramanathapuram, home to Chettiyars, I can only think of the famed Tamil traders whose palatial Chettinad mansions and unique cuisine have charmed visitors. When in Chettinad, don’t miss their kuzhambus and paniyarams accompanied by spicy chutneys. 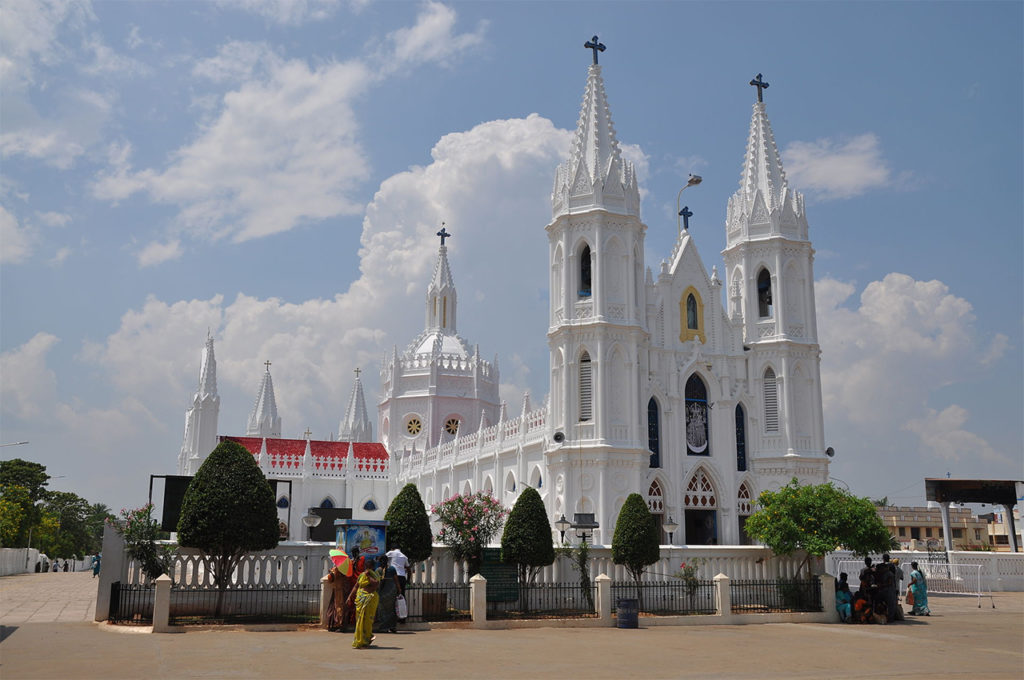 Next comes the Coromandel Coast, which begins in Andhra moves over to Tamil Nadu where it settles in a long curve. The name ‘Coromandel’ is a Portuguese adaptation of the word ‘Cholamandalam (Realm of the Cholas). It stretches from Tiruvallur and Chennai in the north and runs along Cuddalore, Nagapattinam, Thoothukudi (Tuticorin), and Rameswaram before ending in Kanyakumari.

For fish lovers, there is the Mannar Biosphere Reserve near the Gulf of Mannar with its teeming aquatic life. Coromandel coast experiences the showers of the North-East monsoon, providing relief from the scorching heat but also bringing several cyclonic storms. The ghost village of Dhanushkodi near Rameswaram was destroyed by a cyclone in 1964, but its ravaged remains provide glimpses of what life was like before. The 2004 tsunami is still recalled with horror by the residents of the coast. The famous church of Velankanni and the Nagoor Dargah, both near Nagapattinam are revered, too. The Church was one of the few places the destructive waters could not touch. It is not uncommon for non-Christians and non-Muslims to visit these shrines. 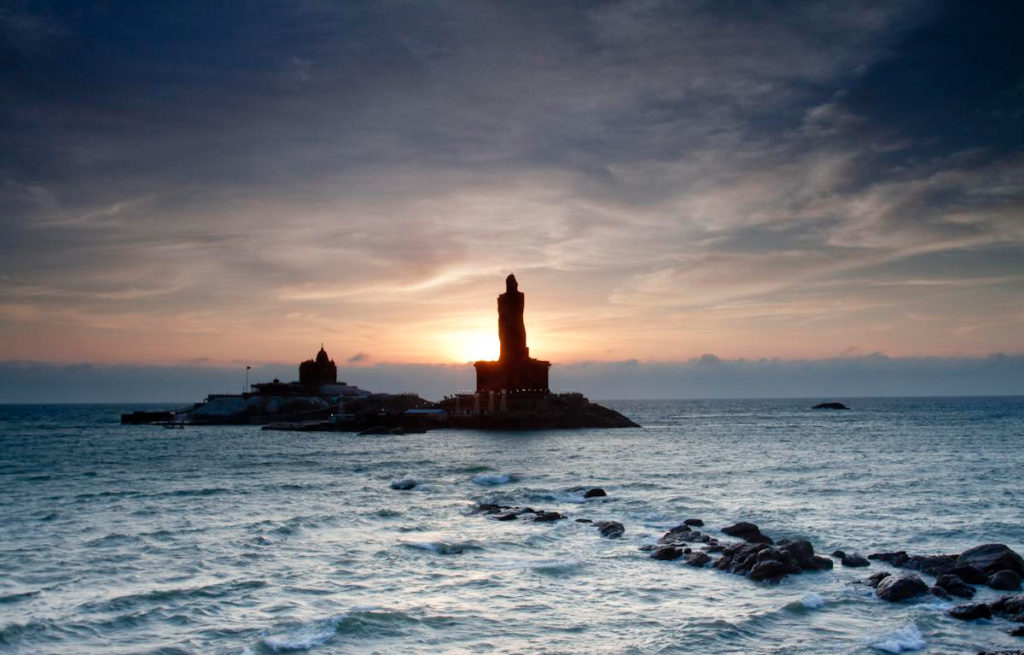 Kanyakumari, at the southern tip of India, is where the mighty Indian Ocean washes the feet of the young Goddess. Watching the sunrise and sunset over the horizon where the three seas meet is a mesmerising experience. No wonder Swami Vivekananda chose this place to meditate and reflect.

The river Cauvery and its distributaries create a delta-shaped region in central Tamil Nadu. The fertile Cauvery Delta formed the Chola heartland in ancient times. 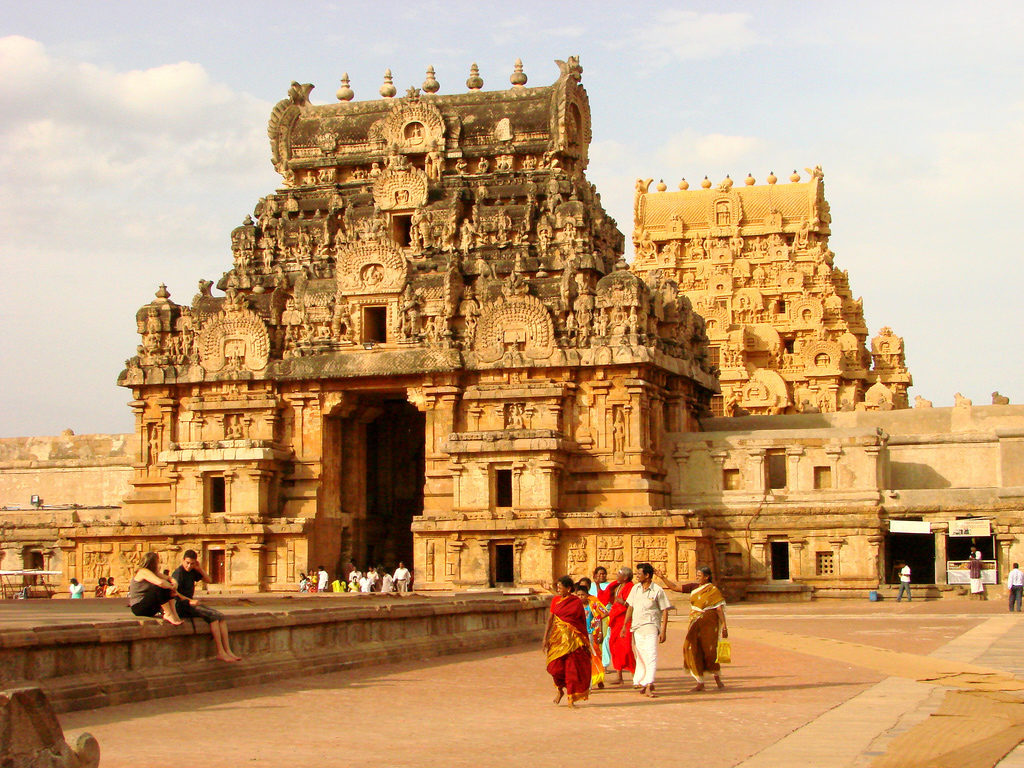 Thanjavur (Tanjore) is known as the ‘Rice Bowl of Tamil Nadu,’ as it is the top producer of rice in the state. The famous Big Temple in Thanjavur is a UNESCO world heritage site and carries paintings of the Chola, Nayak and Vijayanagara period on its walls. Vegetable dyes were used to bring out a palette of colours, which have stood the test of time. The famed Tanjore painting traces its origins to the Maratha rulers of Thanjavur in the 17th century. It is also famous for one of traditional toys of India – bobble head toys (thalai aatu bommai).

Kumbakonam is another small town famous for its temples. Temples for the Navagrahas (nine planets) are here, besides hundreds of other temples, big and small. Like the Kumbh Mela in North India, Kumbakonam hosts the sacred ‘Maha magam’ once in twelve years. Millions of devotees take a dip in the holy ‘Maha magam tank.’ Kumbakonam is also famous for its betel leaves and vessels made of brass and copper. 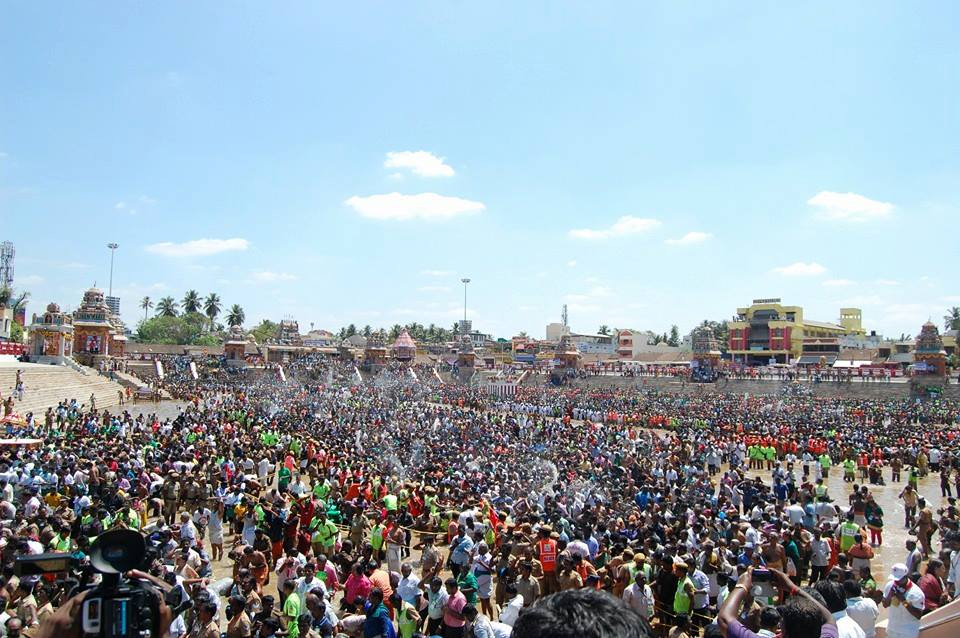 Tiruchirapalli (Trichy) serves as the centre-point of Tamil Nadu. Lord Ganesha blesses the city from his abode atop the Rockfort temple, which provides a stunning view of the city, the Cauvery and the Srirangam temple complex. Trichy is an educational and industrial hub. The birthplace of Sir CV Raman has produced eminent personalities including Dr APJ Abdul Kalam and several famous writers, poets, musicians and actors.

Chola Nadu is full of lush green fields, where most of the state’s food crops grow. Sweltering heat in summer can sap one’s energy, but a gulp of panneer soda (soda infused with rose essence) is refreshing.

Chennai, Kanchipuram, Vellore, Villupuram and Thiruvannamalai districts in the northern- most part of the state constitute Tondai Nadu. The cultural stamp of the Pallavas is visible throughout this region.

The coastal towns were the entry points for European invaders on Indian soil. They have all left behind impressive monuments in many coastal towns such as Tharangambadi. Coromandel has several magnificent temples, such as the famous Nataraja Temple at Chidambaram and the Pallava era temples of Kanchipuram and Mahabalipuram. 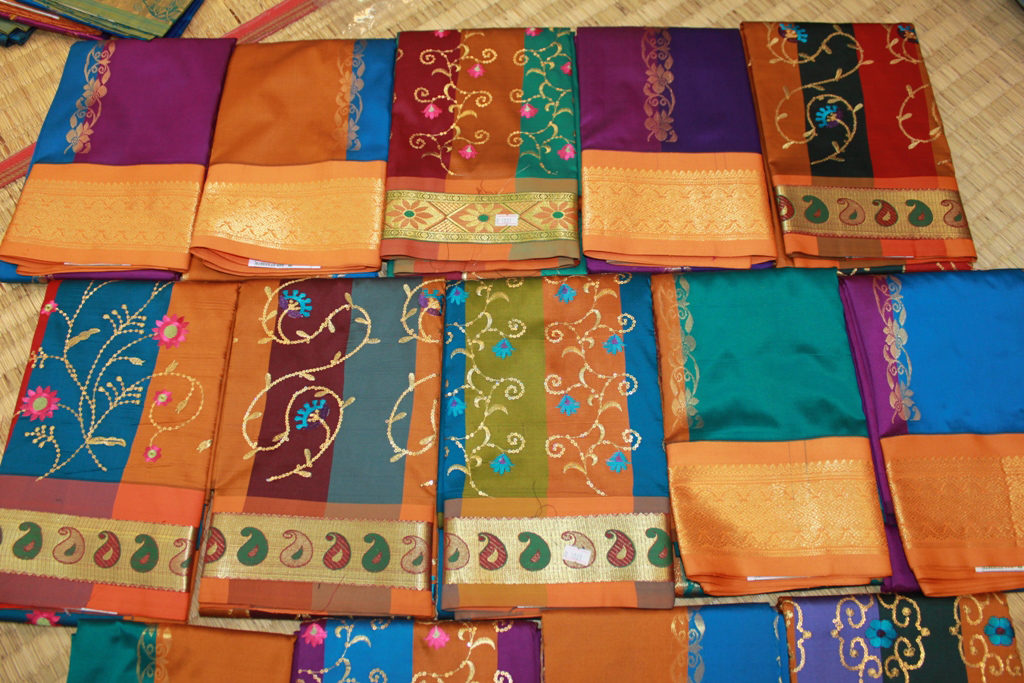 Kanjivaram silk sarees which are popular all over the country owe their name and origin to Kanchipuram. The small town is an important pilgrimage site. It is synonymous with the Goddess Kamakshi. Kanchipuram idli is an interesting variation of its popular cousin, the regular idli. It is mildly spiced, cylindrical in shape and is the prasad given at the Varadharaja Perumal Temple. The sprawling temple at Tiruvannamalai is a prominent pilgrimage site for Saivites. They pour into the town in millions for ‘Karthigai Deepam’ (celebrated in the Tamil month of Karthigai) to see the sacred lamp being lit on top of the hill. 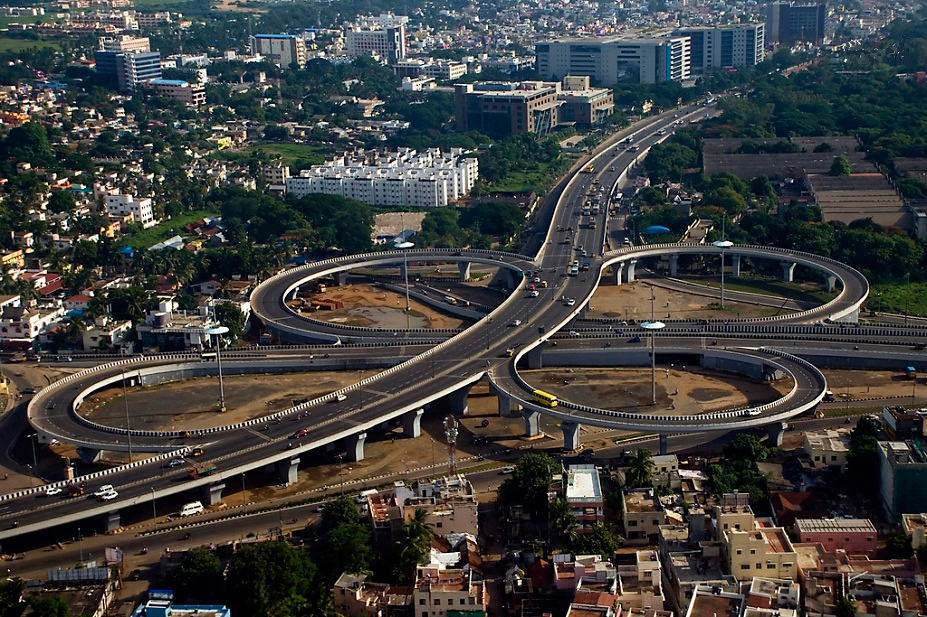 Last but not the least, Chennai, the capital of Tamil Nadu, is the land of IT parks, coffee days, and malls on the one hand and Kollywood, Carnatic kutcheris (concerts), and Bharatanatyam on the other. The city owes its origins to the British, who bought land from the Nayak king in 1639 and established the first British settlement in India around it. Along with the change of name from Madras to Chennai in 1996, the state capital has evolved into a vibrant cosmopolitan city, while seamlessly assimilating the simplicity of its past. Mornings and evenings spent at the Marina beach or the Besant Nagar beach are Chennaites’ favourite mode of escape from the daily grind.