10 Amazing Festivals of Kerala that You Must Experience!

Kerala during the festival season is at its peak! The state simply lights up due to the beautiful decorations all around, as well as the fanfare of the enthusiastic residents who gather together to celebrate the renowned festivals of the state. Being there to witness the magnificent festivals of God’s Own Country is truly a privilege, for this wholesome experience is one that will be etched onto your hearts and souls forever. However, for now, it seems you might have to live vicariously through words that truly aren’t enough to describe the ineffable splendor of these festivals.

Let us commence this vibrant journey with Kerala’s very own: Onam. This is a ten-day festival from Atham (the first day) to Thiruvonam (the last and holiest day). Onam is celebrated throughout Kerala with devotees offering their prayers, dressed in traditional clothing, especially women who look elegant in the white and gold saree referred to as Kasavu. At the doorstep of every household, you can observe a beautiful rangoli made entirely from flowers or pookkalam. Additionally, a customary 9-course meal, consisting of 36 dishes called ‘Sadya’ is cooked for this auspicious occasion and is served on banana leaves. This festival also observes the masses participating in boat races, dances, and martial arts. This festival is celebrated to mark the return of Mahabali, a generous and fair ruler of Kerala. Under his reign, Kerala was nothing less than a utopia and his popularity rose which meant a decline for the Devas who were annoyed by the same. To respond to their complaint, Vishnu went on Earth in the form of a dwarf: Vamana, and requested three steps of land from Mahabali who granted his wish. Vishnu then exponentially grew in size and took the steps. The first one over Earth, second over the heavens, and with no space left, Mahabali offered his head as the third step. Vishnu, touched by his act, allowed him to go back and visit his subjects once a year on the day that is now celebrated as Onam.

Kerala is a state that is renowned throughout the globe for its backwaters. One of the major attractions to visit them has to be without a doubt, the enthralling boat festivals. Whether you are participating or merely witnessing, you are surely in for quite a ride. These races are simply captivating with the surrounding fanfare and the constant wonder as to who will win with boats overtaking each other from time to time making it a very close call. The snake boats referred to as ‘Chundan Vallams’ also serve as another charm of this festival. Some Kerala boat races that are a must-visit are the Vallam Kali and the Nehru Trophy Boat Race.

The religious festival of Maha Shivratri is zealously rejoiced throughout the state of Kerala. As per legend, the day marks the night when Lord Shiva performed the infamous Tandava Nritya which is said to have saved the entire world from its doom. Falling between February and March, per the Hindu Lunar Calendar, Maha Shivratri, as denoted by its very name, is a night in the remembrance and commemoration of Shiva. Devotees in large numbers attend the event at the Aluva Mahadeva Temple, in its namesake city, near the banks of River Periyar.

Another well-known festival in Kerala is Vishu. Celebrated on the first day of the Malayalam month of Medam, it marks the astronomical new year, and people throughout the state dynamically commemorate the same. It is also considered to be the day when demon Narakasura was defeated by Lord Krishna. An interesting aspect of this festival has to be ‘Vishnukkani’. Kani is a Malayalam word that refers to what is first seen and therefore the object that you first set your eyes upon during the morning of Vishu serves as a determinant of your luck throughout the year. It is because of this the Vishukkani is previously prepared by the women of the family and it consists of lemon, an oil lamp, mirror, Lord Vishnu’s image, and other such items. The family members are blindfolded by traditionally the eldest member and then guided towards the Vishukkani to bring upon good luck. The arguably best part of the festival for any foodie like me is the truly mouth-watering delicacies prepared such as Veppampoorasam (a sour mango soup) as well as Sadya. Apart from this, children also burst firecrackers at night, adding to the joyous day.

The enthralling festival of Attukal Pongala is one endemic to Kerala and is celebrated every year, generally in the Malayalam month of Kumbham, at the Attukal temple, situated in Thiruvananthapuram, the state’s very own capital devoted to its namesake, the Attukal Devi. The temple is filled with hundreds of thousands of devotees and the majority of them are women who revere Devi Attukal and offer her sweets in clay pots including payasam, one of Kerala’s specialties. A special is also executed on this occasion by a crowd of women which is considered to gratify the Devi. An interesting fact about this festival is that it made the Guinness Book of World Records for the largest female gathering with the number going up to 25 lakhs in the year 2009. This festival is truly mesmerizing due to the way the city of Thiruvananthapuram simply glows as well as the celebration of the power of women brought upon by this festival.

The celebration for this festival usually takes place in December or January. This festival is devoted to Lord Shiva and is considered to be the ideal day to worship Lord Shiva. All of Lord Shiva’s devotees go to the temple for the blessing of the Lord.

The festival’s myth is that it honours the death of Kamadeva the God of Love. At 4 a.m. on this day, women start getting up and sing hymns about the God of Love and create a rhythm with their hands splashing water. Finally, women stand gather in a circle around a lamp called Nilavilakku and sing songs in the praise of Kamadeva. For unmarried women, this event is very important since they keep a fast this day and pray for good husbands. You can see temples and the ceremonies on Thiruvathira decorated beautifully. It’s without a doubt one of Kerala’s most important celebrations. 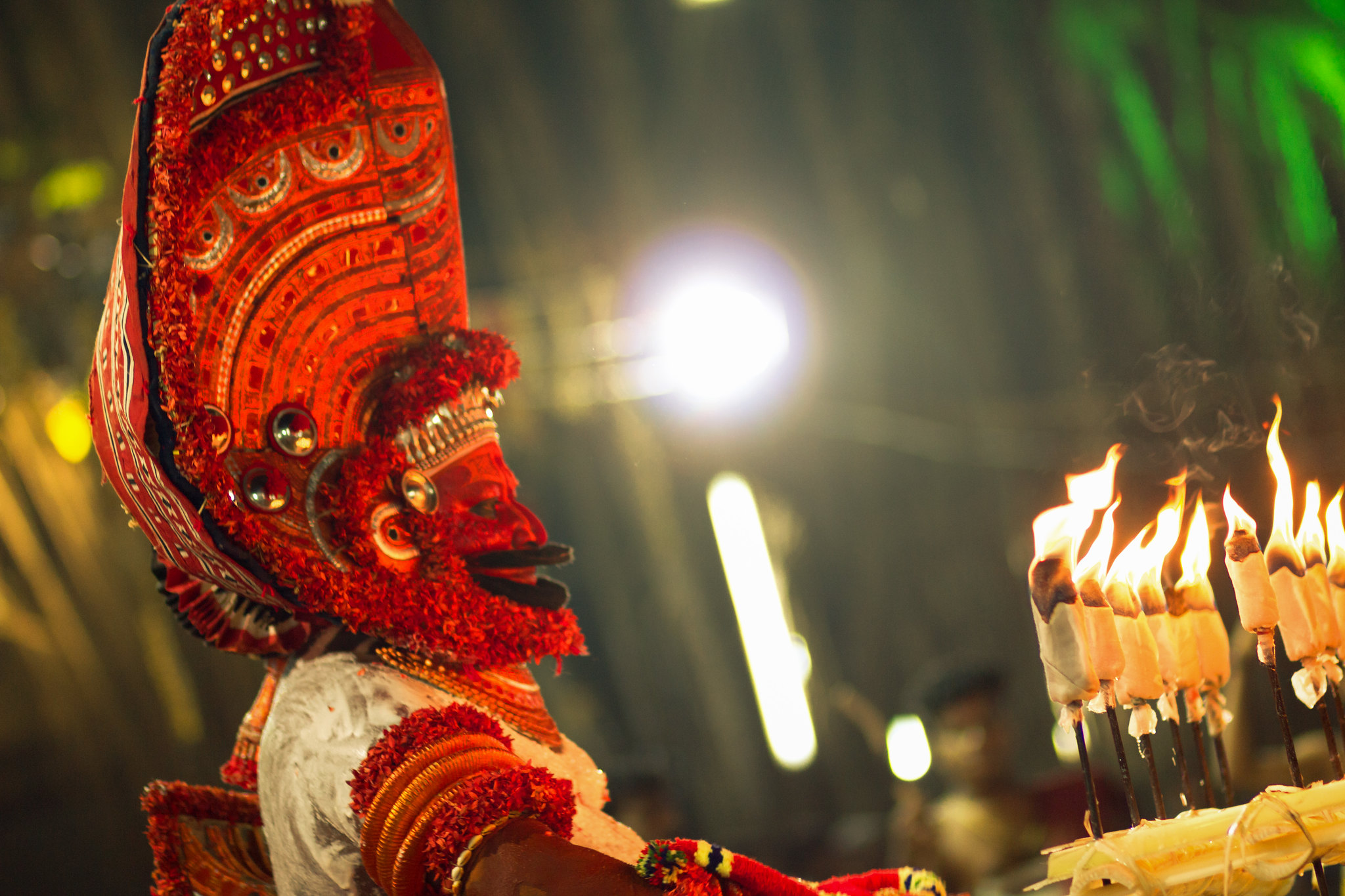 Theyyam celebrations are observed in Koyilandi Wadakara Taluk, the Kozhikode district of Kannur, Kasargod and Mananthavadi, and is popular in the North Malabar region of Kerala, mainly in Kolatunada. Between December and April, this 800 years old celebration is commemorated. This is a form of worship displayed in the art of dance. Over 400 forms of dances exist. Some of the great performances include Wayanad Kulaven, Raktha Chamundi and Kari Chamundi. The performer of Theyyam is taught in three phases. The first stage consists of adorning oneself with flowers and colours. They wear a mask, too. The performer is then subjected to self-torture on the second stage. The third level consists of dance.

During the performance, often called the “dance of gods,” mythological stories are dramatised. Performance with breaks could last between 12 and 24 hours. The performer has to observe fast after sunset as the deity and dancer of the temple. Specialists do the make-up of these dancers. The dance ends with the distribution of prasad.

This celebration is one of Kerala’s most renowned temple festivals. It is held in Thrissur’s Temple in Vadakkunnathan. Seven days before the major pooram, the celebration begins with ceremonial flag hoisting, called kodiyettam. People sit atop enormous elephants, completely appointed outside the temple for this very event. It takes 3 days, which takes 36 hours, to make the traditional pujas, ornaments, and to enjoy the wonderful event with amazing fireworks. Thrissur Pooram features many colours and music, mostly to honour Lord Shiva.

Almost 300 000 people from all over India attend this celebration and Kerala is full of people. Therefore, if you’re planning to attend the festival, book good rooftop rooms to watch the wonderful fireworks and a procession. Thrissur Pooram is a loved Kerala Festival for its gorgeous and lively fireworks which are lit all night.

The most significant and spectacular Christian holiday is held for Christmas in honour of the birth of Jesus on 25 December. There are a variety of shows including the Christmas Star, Christmas tree, Crib and Christmas cake, and the Christmas Father. The glittering of the Christmas stars, the magnificent pointer to the Babe from Bethlehem, sets the mood with the season’s advent. Priests hold a mass in churches three times, beginning at midnight with the first. Just before the midnight service, the priest brings an image of the child, preceded by rows of children holding lights in the crib. In the middle of the fireworks, the song “Gloria in exelcis Deo” is sung. In Kerala, Christmas expresses itself in the cultural traditions of the country.

Without a plum cake, Christmas in Kerala is incomplete. Every Christian household has its unique plum cake variant and it must not be missed. The fruit is steeped in wine for about 41 days to form the cake! Besides the cake, wine is also made in the home. Mutton or Chicken Stews & Appams, Kappa Biryani, Kappa stew, Neyyappam, Unniappam and Acchapam, all types of traditional meals that are made. The people of Kerala have recently begun to make a turkey for Christmas.

The Ambalapuzha Arattu festival is conducted in the Sree Krishnaswamy Temple at Alapuzha and blesses the Ambalapuzha Unnikannan. According to the Malayalam calendar, the festival takes place between March and April in the month of Meenam. It’s a festival of 10 days and begins with the ceremonial hoisting of the flag and finishes in an Arattu, meaning holy bath in the asterism of Thiruvonam. The temple is dedicated to Lord Krishna and was built between the 15th and 17th centuries by king Chembakasserry Pooradam Thirunal-Devanarayanan Thampuran.

The festival is well-known for the processions of several ornamented tuskers. Velakali, originally from Ambalapuzha, is a demonstration of music and martial art. The Ambalapuzha Nadakashala Sadya; a ritualist feast on the Pallivetta Day of the festival is another such noteworthy event.

Apart from these, there are various other religious and temple festivals celebrated in the lively state that is Kerala. Right now, anyone would be enticed to buy a ticket to Kerala and celebrate with the welcoming locals their various breath-taking festivals and eat some delicious South-Indian food too. These festivals bring us closer to our culture and roots which we sometimes forget about owing to the hectic nature of everyday life. So, let’s do our best to remember and take in our marvelous heritage. Also, do let us know in the comments section below about your favorite festival in Kerala.

Cheery Ways To Enjoy Christmas on a Budget

Best Places to Visit in Kerala to Rejuvenate Your Senses!