Ghoomar Dance of Rajasthan – Spinning the Colors of Cultural Heritage

Ghoomar or Ghumar Dance is a traditional folk dance from the state of Rajasthan, also known as The Land of Kings. Ghoomar dance is a beautiful dance form that can be seen in the nooks and corners of the royal state of Rajasthan. Bollywood, too, takes pride in representing this folk dance on the big screen. If you are a Sanjay Leela Bhansali movie fan, then you must have danced along to ‘Dholi Taro’ from Hum Dil De Chuke Sanam and again in ‘Ghoomar’ from Padmavat.

The Ghoomar dance form got its popularity for a long time, becoming a cultural pride not just of the state of Rajasthan but of India as a nation. These days, when contemporary meets classic, many new variants of a style can be seen. In reality dance shows, Ghoomar dance, when performed on stage, still holds on to its authentic traditional technique. Everything hails from a long journey since the old days, the dress, the beat, and the circle.

Here we will talk about some of the traditions associated with the Ghoomar Dance, its history, style, music, and how it came to be national pride.

Etymologically, Ghoomar comes from the word ‘ghoomna’, which means spinning around or pirouetting. Also known as Jhumar, the Ghoomar dance form originates from the Bhil tribe of Rajasthan. The performance was initially meant to worship the Goddess Sarasvati. The Bhil tribe is one of the indigenous groups of India, initially situated in Rajasthan.

The Kachhwaha clan of the Rajput ruling over Jaipur defeated the Bhil tribe for territorial occupation. After a mandatory proprietary clash, the families were in a humble coexistence. Like in any other coevality, the royal Rajput later came to adopt the dance form from the Bhil community. The ladies of the royal court too indulged in performing the Ghoomar dance form for various occasions. It was from here that the dance form came in association with the royalties.

A young adult girl can perform this dance form as a rite for her childhood to womanhood. The femininity token of the dance form gives it more authenticity and makes it so popular.

Those aware of the rich culture of India, in general, can easily picture a lot of colours, sequences, and flair in traditional dresses of the country. Coming particularly to the attire of Rajasthan- The Land of Kings, especially during the performance of the Ghoomar dance, long skirts with flair, sequence, colourful patterns, veils, accessories, these are all quintessential parts of the dance.

Ghoomar dance is typically associated with women. It is, therefore, a given that the costume for the dance will have all the zing to add a more feminine touch to the dance. Ghagra, a traditional flowing skirt with beautiful and colourful patterns and sequence works, and choli, the blouse complementing the heavily embroidered skirt, is the main attire of the dance. As the dance form’s history is associated with royalty, the women dancing usually have their faces covered with a veil. The veil is also in a beautiful design, usually made of an opaque cloth.

The jewellery also plays a big part in the entire visual of the dance. Heavy ornaments are a must to finish the whole look. The performance of the dance is a grand event not just because of the occasions. The ladies put a lot of care into the dance details, their outfits being a major showstopper.

Ghoomar is a folk dance form, and the music that accompanies the dance is also rich in folk culture. Without a beat to give a company, a tune to sway to, dancing cannot occur. Bollywood and its distinguished directors gave us many Ghoomar dances to enjoy, the theme being so popular that they became party anthems for weddings. Those same songs are inspirations from traditional folk music.

When the movie Mirzya hit the theatres, the song spoke a lot with the audience. One of the songs from the movie, titled Aave re Hichki, is originally a traditional Ghoomar dance song. The very famous Ghoomar song from Padmavat, the film, is also another contemporary retake of the folk song. These songs have a particular tempo, an upbeat, lilting rhythm that automatically makes its listeners sway along with them.

Before the jukeboxes took their place beside the stage during weddings or other celebrations, the women dancing the Ghoomar would sing the songs themselves. The ladies would keep up the beat of the music and not miss a step of their dance. 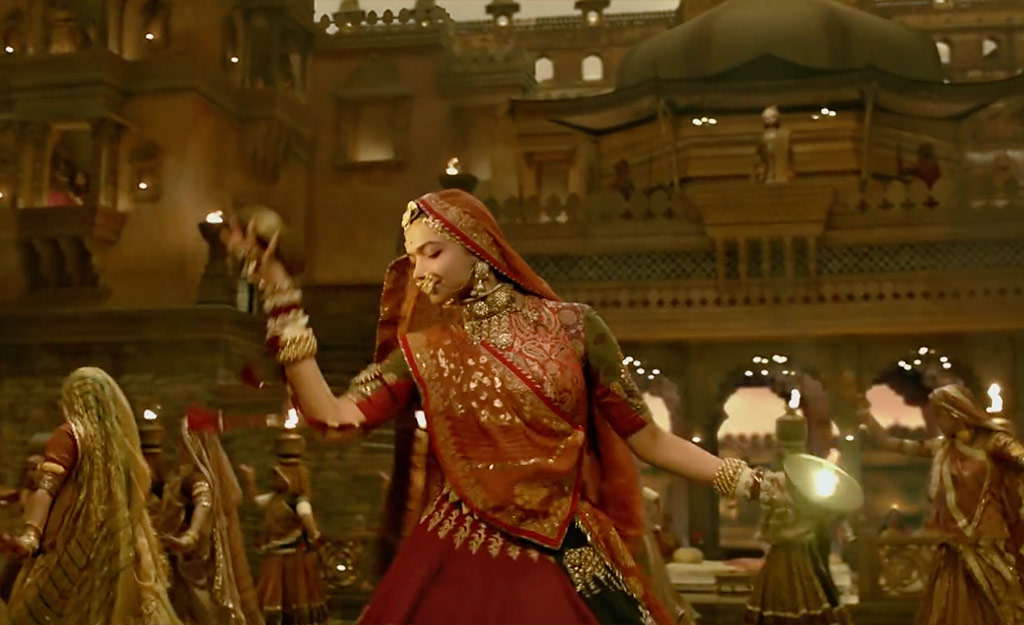 A circular formation with the dancers going round and round with detailed footwork is the basis of the dance. Ghoomna, meaning going around in circles, is what gave the dance form its name. The dancers move in a clockwise and anti-clockwise direction, moving their hands to the beat and their footwork at par. Their attire, the ghagra, flows along with their movement, giving an extra flair.

The tempo is very upbeat, but the women never miss a step or swirl of their dance. They sometimes clap along to the beat, sometimes unite their hands while going around in circles. The pirouetting can seem very dizzy to the viewers but is an exact and crucial part of the dance.

In the present time, Ghoomar dance is a representative of the entire state of Rajasthan- The land of Kings. It is no longer only associated with the royalties but is a cultural asset for everyone from the state. Udaipur, Jodhpur, and Kota-Bundi regions of the state have also taken this dance form.

Each region now has a unique dance form that helps an expert distinguish the performances from a particular place. Ghoomar dance from the Udaipur region has a touch of Garba; Jodhpur has given an intense limb movement to the dance; and in Kota-Bundi, there is a unique, catchy tune accompanying the dance.

There is no particular time limit to the performance. Sometimes it lasts for hours, the dancers going round-and-round, keeping up with the beats. Some may even add in freestyle while dancing, which gives the dancers more energy to keep performing. The synchronization shared by the dancers is something to behold. From the colours of their dresses to their step and swirl, everything mesmerizes and beckons their audiences to join along with them.

All in all, the harmony witnessed in the Ghoomar dance is what makes it so popular. It is a folk dance that has now become a symbol of a state and the entire nation. The history, music, attire, and dance steps all amalgamate to make the Ghoomar dance rich in culture.

The Lively and Captivating Folk Dances of Rajasthan