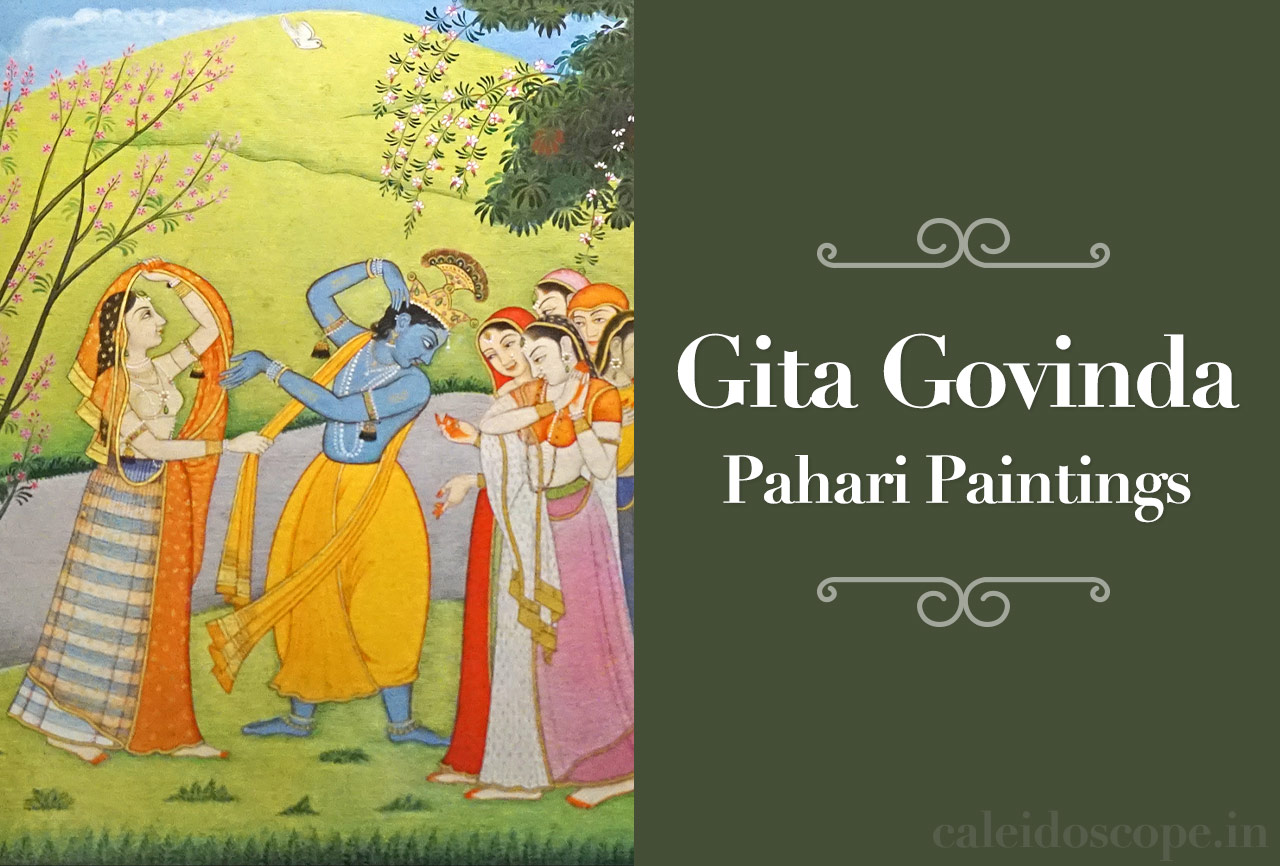 #Didyouknow ‘Gita Govinda’ or the ‘song’ of the dark Hindu God ‘Krishna’, is an epic Sanskrit work composed in the 12th-century? The text is by a mendicant-poet, Jayadeva Goswami, an ardent devotee of Radha-Krishna. It describes the relationship between Krishna, Radha and gopis, the cowherd maidens of Vrindavan using a poetic idiom. It is considered an important text in India’s Bhakti movement. The popular and iconic text is sung, recited and choreographed for dance and studied as a religious text to the present day.

The Encyclopaedia Americana mentions about Jayadeva –

‘‘JAYADÉVA, or DJAYADÉVA, Hindu poet and dramatist: lived in 1200 or 1300 A.D. The time and details of his life are unknown, but his ‘Gita-govinda,’ the ‘Song of Krishna,’ is the only known example of the religious drama in Sanskrit. The drama is a lyric poem, and is usually given a mystical interpretation. It delineates the love of Krishna, as a cowherd, for Radha, the milkmaid, his faithlessness and subsequent return to her, and is taken as symbolical of the human soul’s straying from its true allegiance but returning at length to the God which created it. The work is of great poetic beauty and is remarkable for its melodious and truthful mirroring of passionate emotions. Native editions are those of Vidyasagara (Calcutta 1882); and Telang and Pansikar (Bombay 1899). ‘Gitagovinda’ was edited with a Latin translation by C. Lassen (Bonn 1836). English translations are those of Sir William Jones (London 1799; new ed., Calcutta 1894); and Sir Edwin Arnold, ‘The Indian Song of Songs’ (London 1875).’’

However, in India, he is known of as a Baidya Brahmin either belonging to Odisha, Bihar or Bengal. A place called Kenduli has been associated with him. The Gita Govinda suggests that he was born in the Kindubilva village, scholars of Odisha, Bengal and Mithila have connected this with a present time place in their own region, Kenduli Sasan near Puri in Odisha, Jayadev Kenduli in Birbhum district in West Bengal, and the village of Kenduli near Jhanjharpur in Mithila region of Bihar. Jayadeva received his education in Sanskrit poetry from a place called Kurmapataka, maybe near Konark in Odisha. Jayadeva became a teacher of the school at Kurmapataka as well. He seems to have been a loner poet, a wandering mendicant, who visited Puri. He supposedly married the temple’s dancer named Padmavati there but this is debated by scholars. He is remembered and celebrated for his most iconic work ‘Gita Govinda’ The ‘Gita Govinda’ depicts Radha, a nayika (heroine) proud of her feminine beauty, full of longing, playful, jealous, passionate and despondent as well. Krishna is shown as the eternal and typical male, who is charming, suave and uncommitted. Radha submits to him, but feels devastated when Krishna returns to his other women, the other gopis.  The sakhis, in this case, the confidantes are gopis who act as messengers and go-betweens. Jayadeva has captured different stages in the attraction between Radha and Krishna in the ten long parts of the poem. As  translator C. John  Holcombe says ‘’Krishna repents, longs for Radha, commiserates with her distress, waits for her, makes her jealous, importunes and praises her, enjoys and assures her of his love. Radha sulks and despairs, wastes away, flies into tempers, rails at Krishna, consents and finds joy and contentment with him’’.

Paintings of The Gita Govinda

Jayadeva’s celebrated masterpiece text is not just sung daily as a part of a ritual, badasinghara, to this day, at the Puri Jagannath temple at Odisha, but has also been brought to life by Schools of miniature painting in India, mainly the Pahari Schools. The Pahari Schools include Basohli, Mankot, Nurpur, Chamba, Kangra, Guler, Mandi and Garhwal of the hilly regions of sub-Himalayan India of princely states by the same names ruled by mostly Rajputs. Raja Sansar Chand of Kangra (circa 1765–1824) was a great patron. The paintings have a lyrical quality about them, especially the Kangra paintings. They have been able to convey the pangs of separation, the joy of union, the sakhi as a messenger, waiting for one’s beloved and love-longing. Jealousy and despondency of Radha as expressed by Jayadeva in the text has also been captured which is a part of the romantic and erotic love format of Gita Govinda.

Let us see some captivating images of the ‘Gita Govinda’ illustrations, as captured by the artists of the ateliers from the 17th to 19th century of a few of these hilly kingdoms.

“He is softly playing His flute, weaving Your name into
the melody. When the specks of dust that have touched
Your body are carried to Him on the breeze, He prizes His
good fortune.”

Waiting for her in ‘Love’s Sacred Thicket’

“And as if — far wandered —
The traveller should hear
The bird of home, the Koil,
With nest-notes rich and clear;
And there should come one moment
A blessed fleeting dream
Of the bees among the mangoes
Beside his native stream;
So flash those sudden yearnings,
That sense of a dearer thing,
The love and lack of Radha
Upon his soul in spring.’’

“The honeyed spring breezes bring Hari to meet with You.
O friend, what could be a greater source of happiness than this?
“He manini, O indignant girl! Do not be angry with Madhava.”

A confidante narrating to Radha about Krishna’s dalliance with gopis –

“See, Lady! How thy Krishna passes these idle hours
Decked forth in fold of woven gold, and crowded with forest flowers;
And scented with sandal, and gay with gems of price —
Rubies to mate his laughing lips, and diamonds like his eyes; —
In the company of damsels, who dance and sing and play,
Lies Krishna, laughing, toying, dreaming his Spring away.’’

…….as translated from the Gita Govind

Krishna in dalliance with gopis –

“I know where Krishna tarries in these early days of Spring,
When every wind from warm Malay brings fragrance on its wing;
Brings fragrance stolen far away from thickets of the clove,
In Jungles where the bees hum and the Koil flutes her love;
He dances with the dancers, at the merry morrice one,
All in the budding Spring-time, for ‘tis sad to be alone.’’

Krishna massaging the feet of Radha –

“My dear one, You have walked so far. Let Me soothe
Your feet with My lotus hands. As I am a valiant follower
of Your anklebells, come and favor Me for a
moment.”

Krishna and Radha In dalliance at the bank of River Yamuna –

“You are My only ornament. You are My very life. You
are the jewel in the sea of My existence. Be gracious towards
Me always. Pleasing You is the sole aim of My life.”

Krishna flirting with the gopis, Radha is upset –

“Sri Radhika’s sakhi cleverly searched out Sri Krishna
and discovered Him nearby, delighting in the enthusiastic
embraces of the lovable cowherd damsels, who were receiving
Him with the utmost respect. Attracted by their advances,
Murari became eager to enjoy love play. Drawing Radha’s
attention to this scene from a hidden place, Her sakhi spoke
to Her again’’.

Radha with a confidante, pining for Krishna –

“In the spring, the lovesick Radhika, whose tender limbs
were soft as flowers, wandered far and wide in
the woods searching for Krishna. Cupid tormented Her mind
with the fever of love, while Her close friend lovingly spoke
to Her to heighten the mood’’.

“His golden garment and wreath of wild flowers
contrast His dark limbs besmeared with sandalwood paste.
Jewelled earrings dangling from His ears make His cheeks
glitter, setting off the bewitching smile on His face.
“He vilasini Sri Radhe! O coquettish girl, look! Hari
joyously revels with a host of love-maddened maidens here
in the forest.”

We can thus understand how these exquisite paintings with their delicate brushwork, depict in visual form the text of Gita Govinda by portraying Krishna, Radha and the gopis in different romantic contexts and situations as envisaged by the poet, giving us a glimpse into their close bonding in a common shared space in the verdant groves of Vrindavan, the banks of the Yamuna River and pleasant hilly glades.

Festivals of Arunachal Pradesh You Must Witness to Enjoy