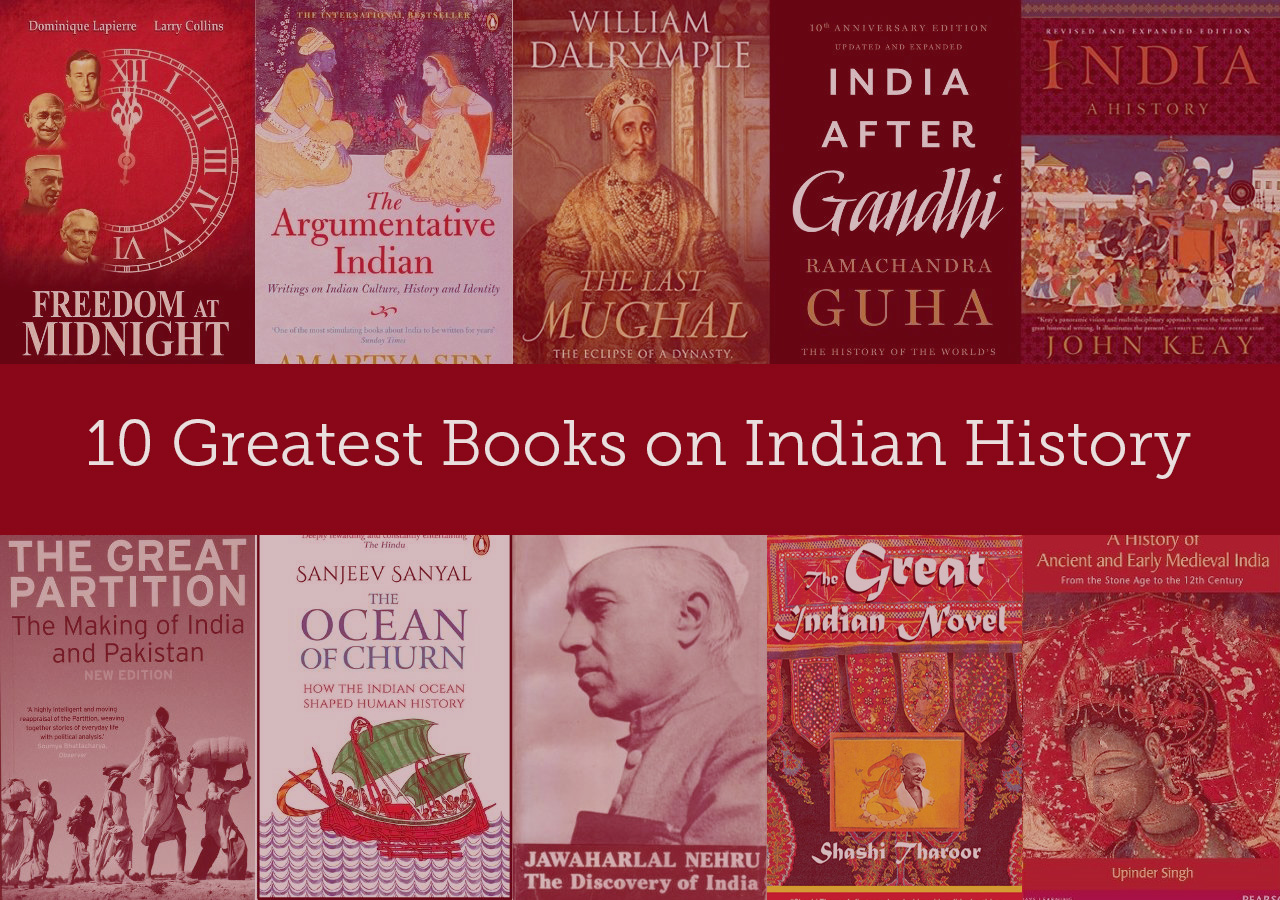 India boasts of having one of the world’s oldest civilizations which can be traced back centuries through the documented history of the Vedas. Many kings and their reigns have influenced this country. It has also been evolved by numerous queens, many empires, faiths and, last but not least, the people. Indian history is comprehensive and diverse and encompasses from early civilizations and conquests to liberation and disconnected battles. During various times of history, several outstanding characters and unforgettable events have been exciting and inspiring. It’s not surprising that thousands of books are written about Indian history, both academic and others, making it tough to find apt literature about this matter. That is why this list of the ten most informative and interesting books about Indian history might be of use to everyone.

1. Freedom at Midnight by Dominique Lapierre and Larry Collins 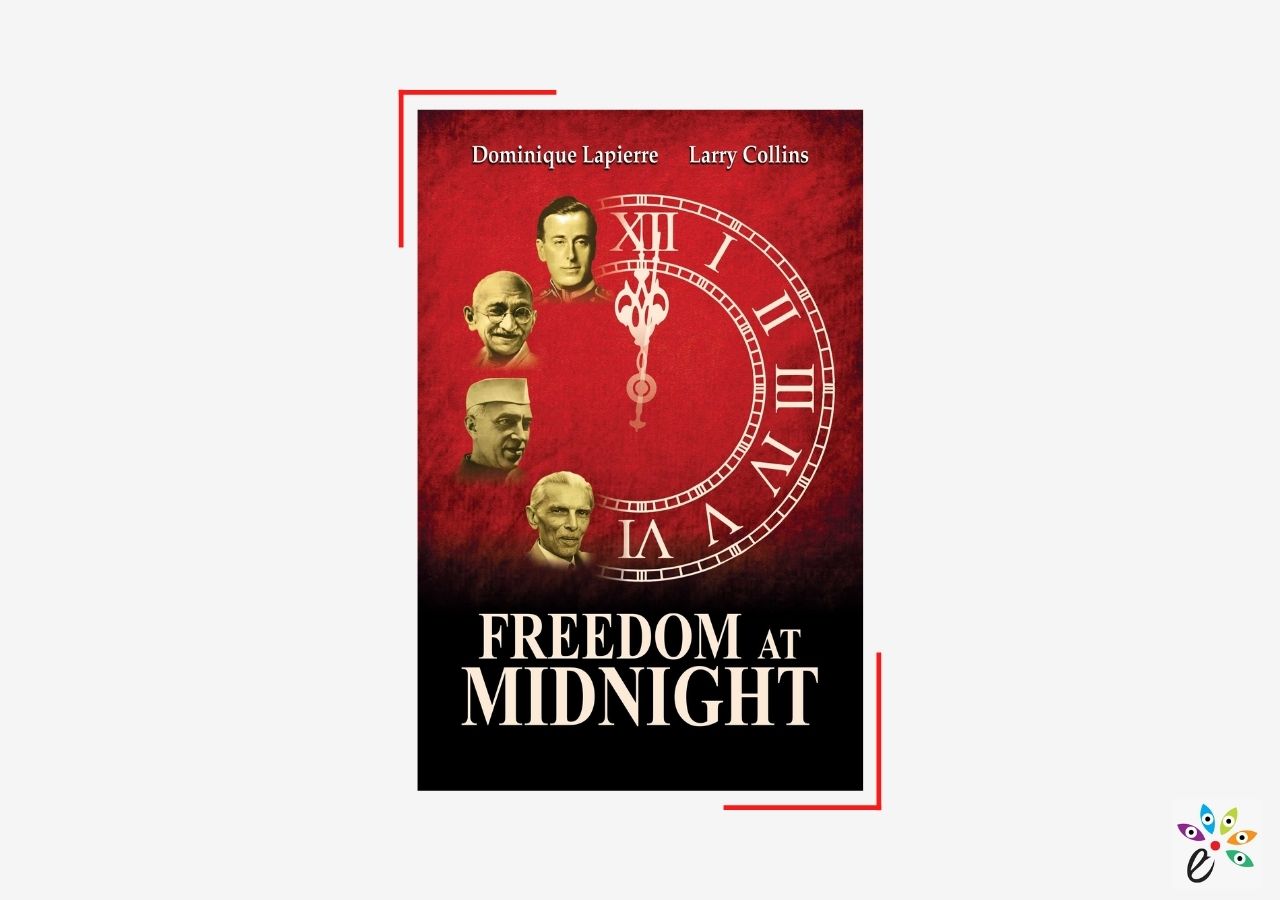 Freedom at Midnight portrays the turbulent year of India’s independence from Britain in 1947. This book focuses mostly on India’s 1946 and 1948 Independence Movement. This work is regarded as historical throughout the span of events that occur during this period. It is thoroughly investigated, contains astonishing information that you would never have known before and is a highly recommended book on the independence and partition of India. The book also contains interviews with Lord Mountbatten, British India’s last viceroy. The book’s narrative technique dives the readers into the visual world of the collapsing Raj and lets them inside the minds of this age’s great actors.

2. The Argumentative Indian by Amartya Sen 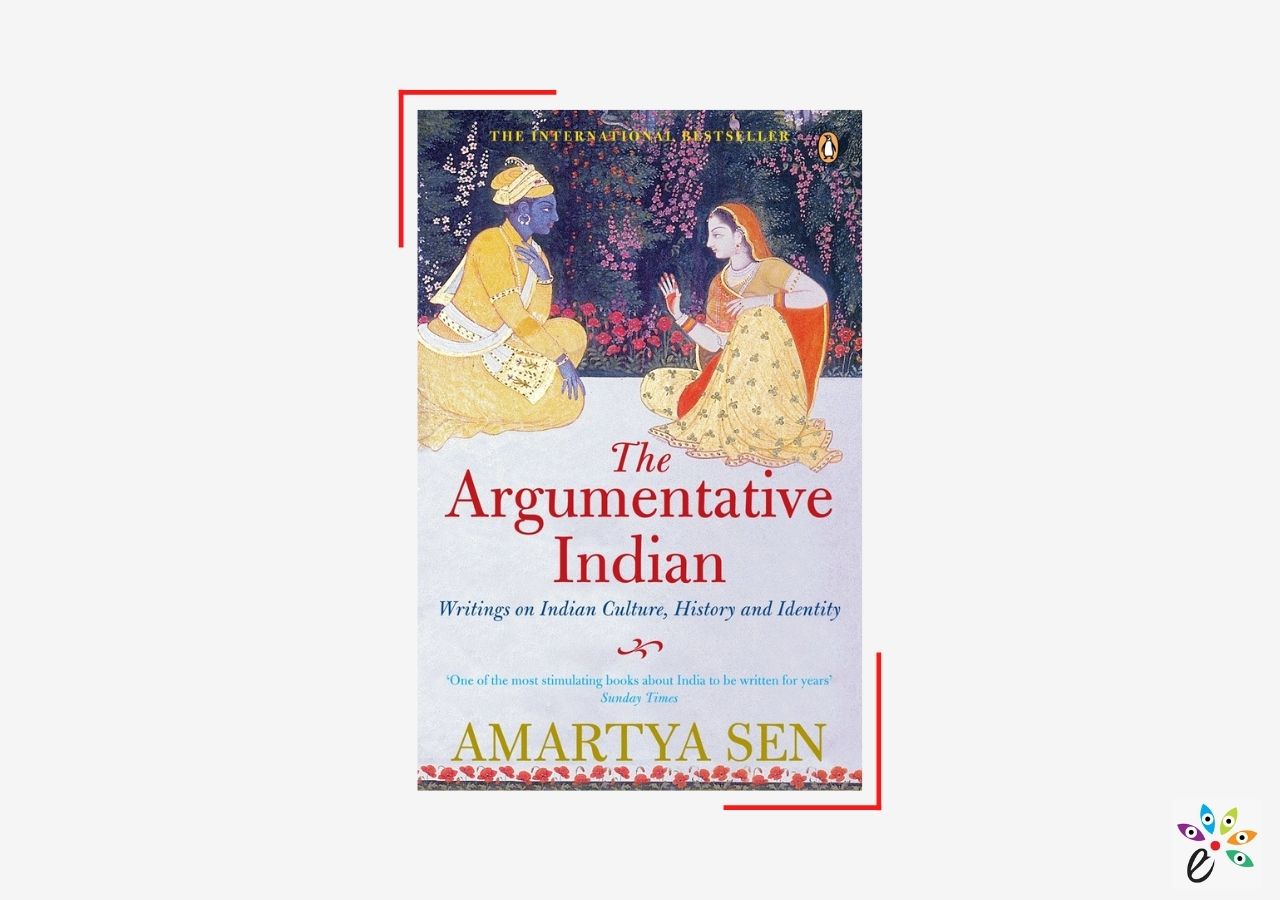 Essential for anybody looking for the basis of Indian politics, this collection of poignant essays on Indian history by Nobel Laureate economist Amartya Sen is a must for this list. This book explains mainly the history and the influences of that past on the cultural identity of India. Sen discusses how India had a long history of public debate (in every aspect of life) and how heterodoxy prevailed centuries ago in Indian civilization. Sen feels that we should all know about this lively past – given that the way in which we embrace our future might have a profound effect. With a focus on tradition in the Indian civilizations of the past, public discussion and argumentation and intellectual variety, Sen expresses his thoughts on what would decide the future of democracy in India.

3. The Last Mughal by William Dalrymple 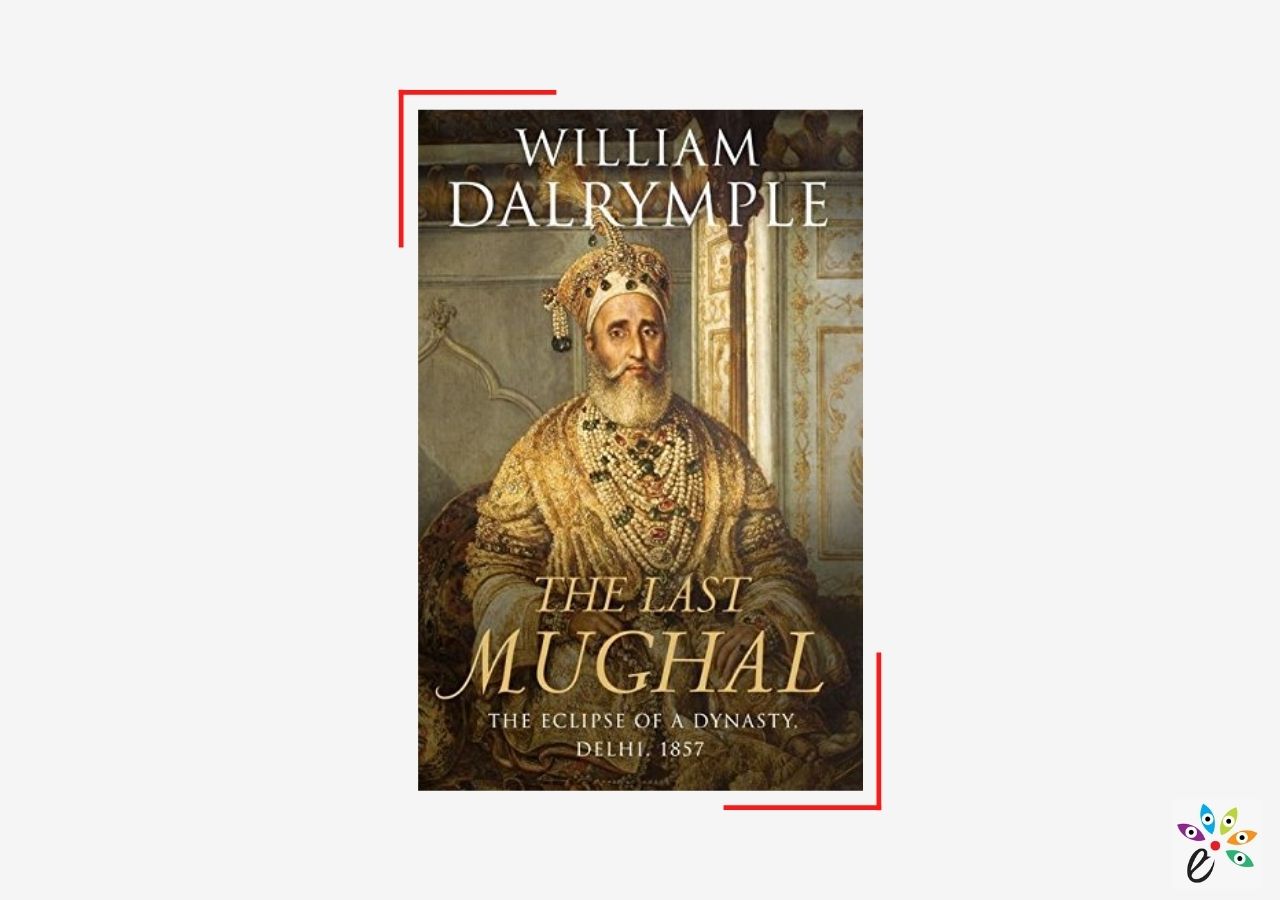 The Last Mughal is a joy for enthusiasts of history and provides a complete account of the years of the decline of the Mughal Empire in India and the rise of the British Raj. William is a distinguished historian and travel writer. The book speaks about a culturally diverse and prosperous society during the tenure of Bahadur Shah Zafar the last Mughal emperor. The first conflict (popularly known as the Sepoy Mutiny) against the British signalled the end of the Mughal Empire in 1857. William recounts how such events occurred in a political and cultural manner and the impact that they had on the country. His styles of writing and his knack for perception make this book a must-read. If you want to know how Delhi came about and the mutiny of 1857, this one’s for you.

4. India After Gandhi by Ramachandra Guha 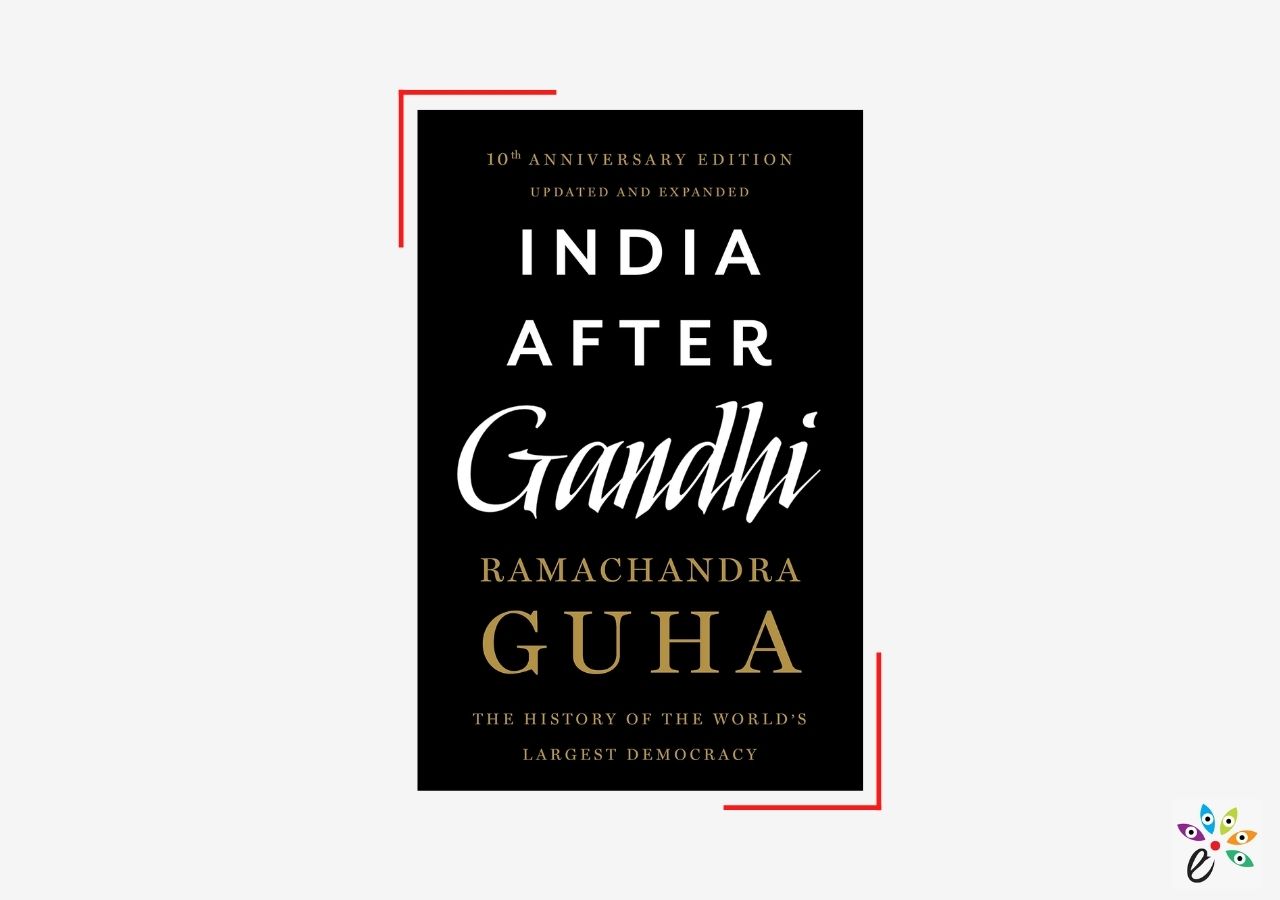 Perhaps one of the best Indian historians at present is Ramachandra Guha. Guha’s India After Gandhi became the go-to book on the journey of India, post-independence from the British in 1947 till the nineties. This is the finest book to comprehend modern India’s development. The former professor who now works as a historian has done a splendid job in making sense of the chaotic and eventful happenings of India since independence – the partition, Nehru socialist programmes, a brief but consequential career of Rajiv Gandhi, the rise of religion, and caste politics in this 900-page book. This may sound long but it is worth the journey and all the events and personalities of this captivating land are detailed here. The book also serves as a good primer to grasp the economic and social reality of India at present.

5. India: A History by John Keay 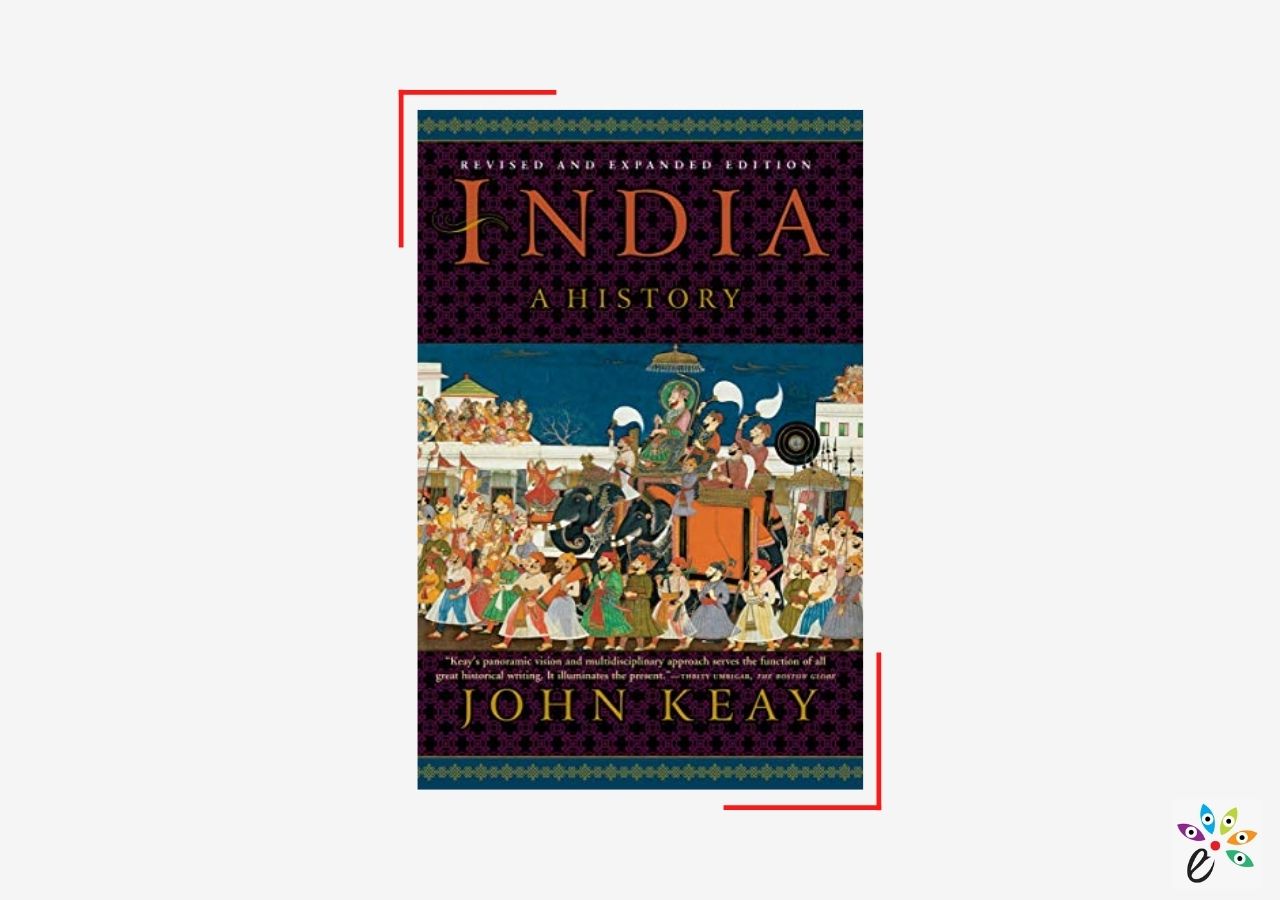 John Keay is an English writer and journalist who writes archives about India, usually with an emphasis on the colonisation and exploration by Europeans.  Skillfully tracing the Indian subcontinent for more than 5,000 years of civilisation, this narrative is a superb reading for all those seeking a crash course in Indian history. John offers a panoramic vision in “India, a history” from the cities of Harappa and Mohenjodaro through the civilizations of the Indus valley to today’s modern India, including all key developments in South Asia, up to the nuclear arms competition between India and Pakistan. This book combines material from different sources into one complete Indian history book. Many regard this as a superb textbook for every history student.

6. The Great Partition by Yasmin Khan 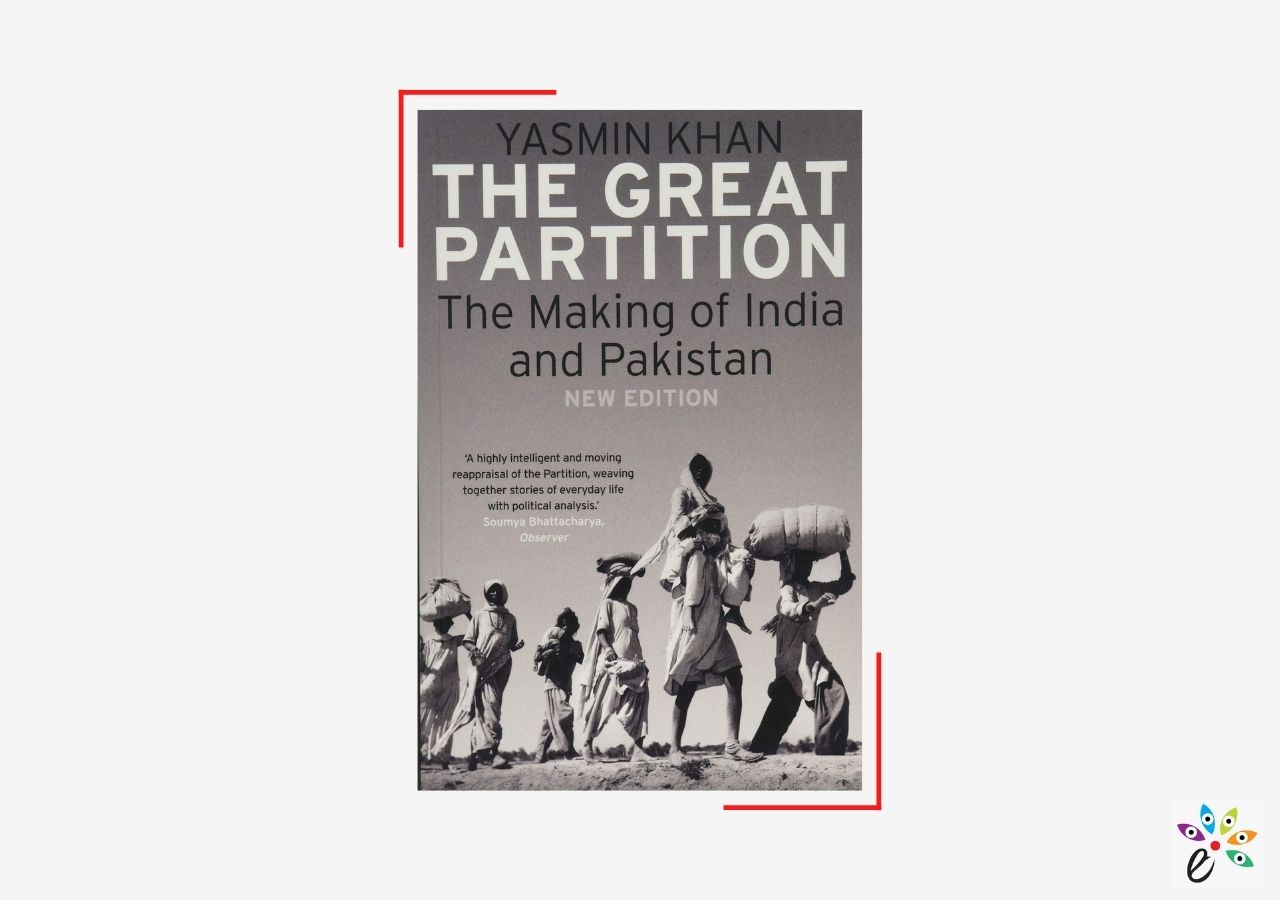 The Great Partition is an essential reading for everyone wishing to understand modern South Asia and is an informative account of British India’s partition into modern India and Pakistan. In this book, Yasmin Khan focuses on combining a series of voices that show the human impact of certain hasty political decisions. She investigates the setting, the way the partition was executed and its repercussions, including internal politics. It was published in 2007 and provided a fresh perspective into the situation. It is precisely written and advised as a much-needed review of decades of official partition history. If you want to discover what goes beyond the “political leaders” of that period and concentrate on other more on-ground concerns during the partition, this is your book.

7. The Ocean of Churn: How the Indian Ocean Shaped Human History by Sanjeev Sanyal 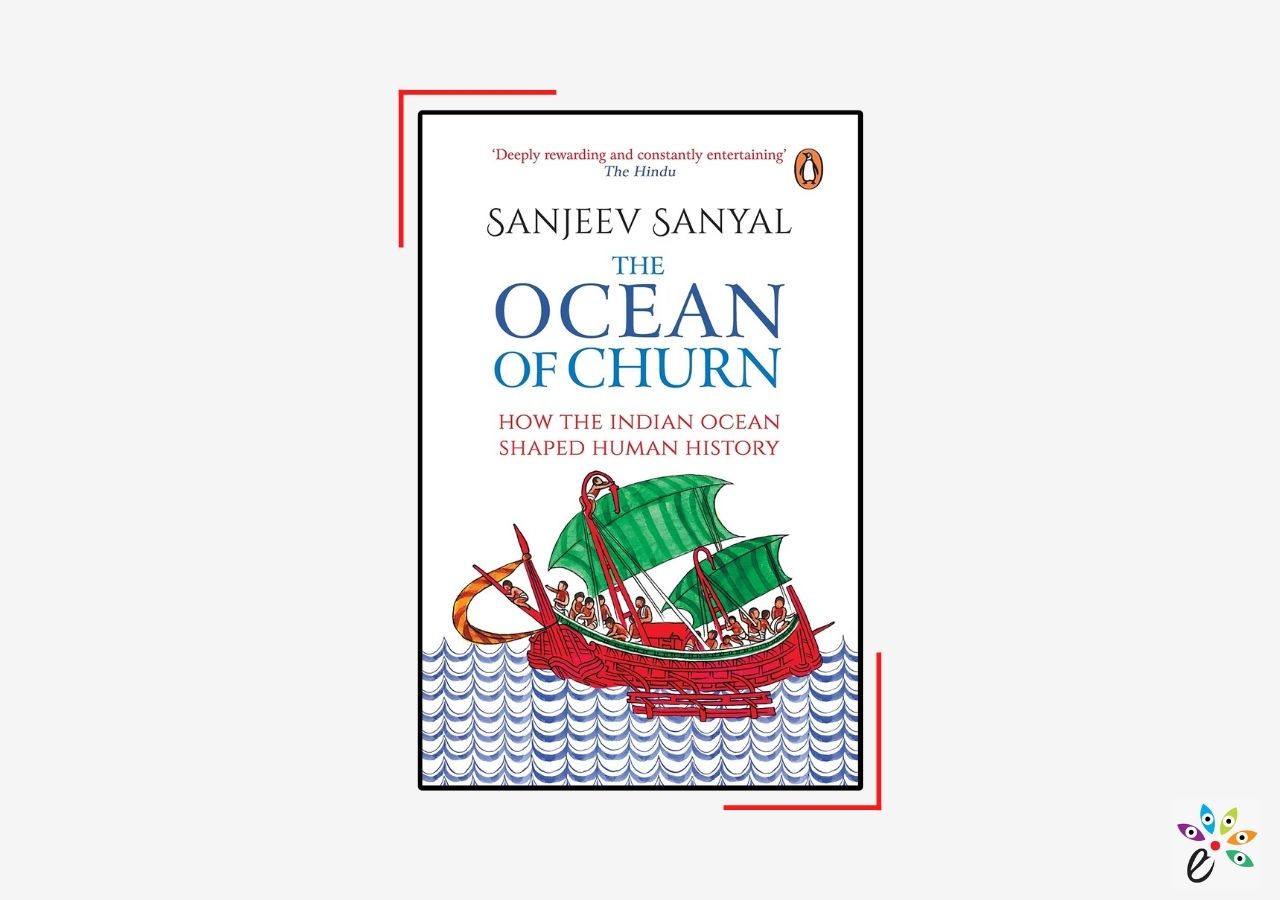 “The Ocean of Churn” by Sanjeev Sanyal is a book for those who need to grasp the importance of the Indian Ocean and the interconnection between human beings in the region that has influenced human history. It is also a necessary read for everyone who wishes to obtain the right view on the contribution of India to humanity. This book is not from a western perspective, unlike most historical works. The Ocean of Churn takes you on a fantastic voyage from mediaeval geopolitics and eyewitness reports from long-lost cities to the latest human genetic discoveries and to bring an area that has defined civilisation from the beginning to life. Each of the eleven chapters of the book discusses a number of important events over some time and together they introduce from ancient times until today the linked history of the Indian Ocean region. These insights are rich in unique anecdotes which, unlike other books about history, make this book an enjoyable read.

8. The Discovery of India by Jawaharlal Nehru 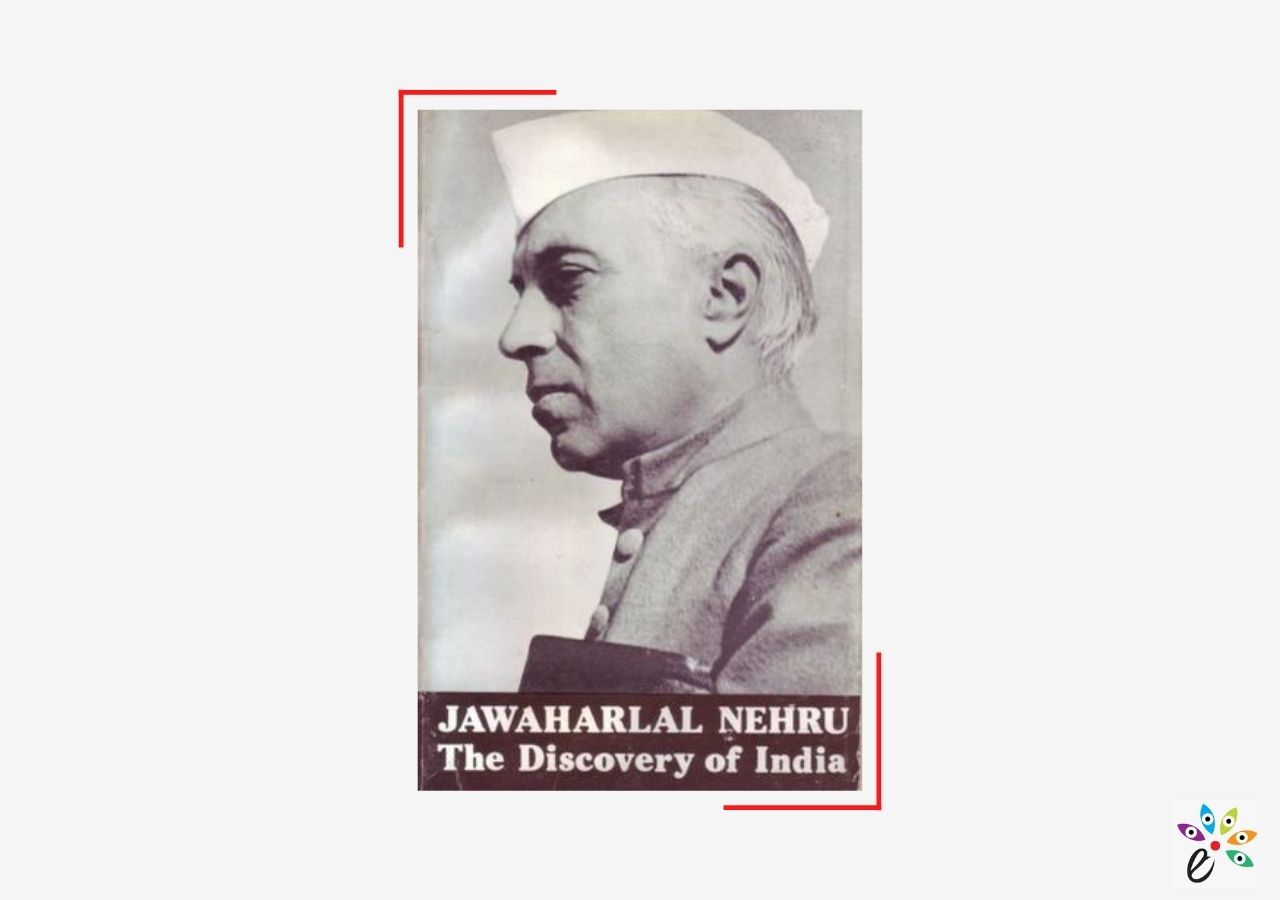 Written in prison between 1942 and 1946 by India’s first prime minister, it narrates the history of India, beginning with the Civilization in the Indus valley through the foundation of the British Empire. He walks past and traces our country’s roots. He studies the culture, the literature, the science, the philosophy and the vital power that led India to become one nation and one people. As a “friendly stranger,” he approaches India, respects his knowledge, condemns her follies and analyses the past as a benchmark, to push the history of society in the creative future. Facts, thoughts and sentiments coexist in The Discovery and produce literary harmony. It is a suggested reading to take on the unbelievably long history of India. This book was also produced by Shyam Benegal as an award-winning TV series. 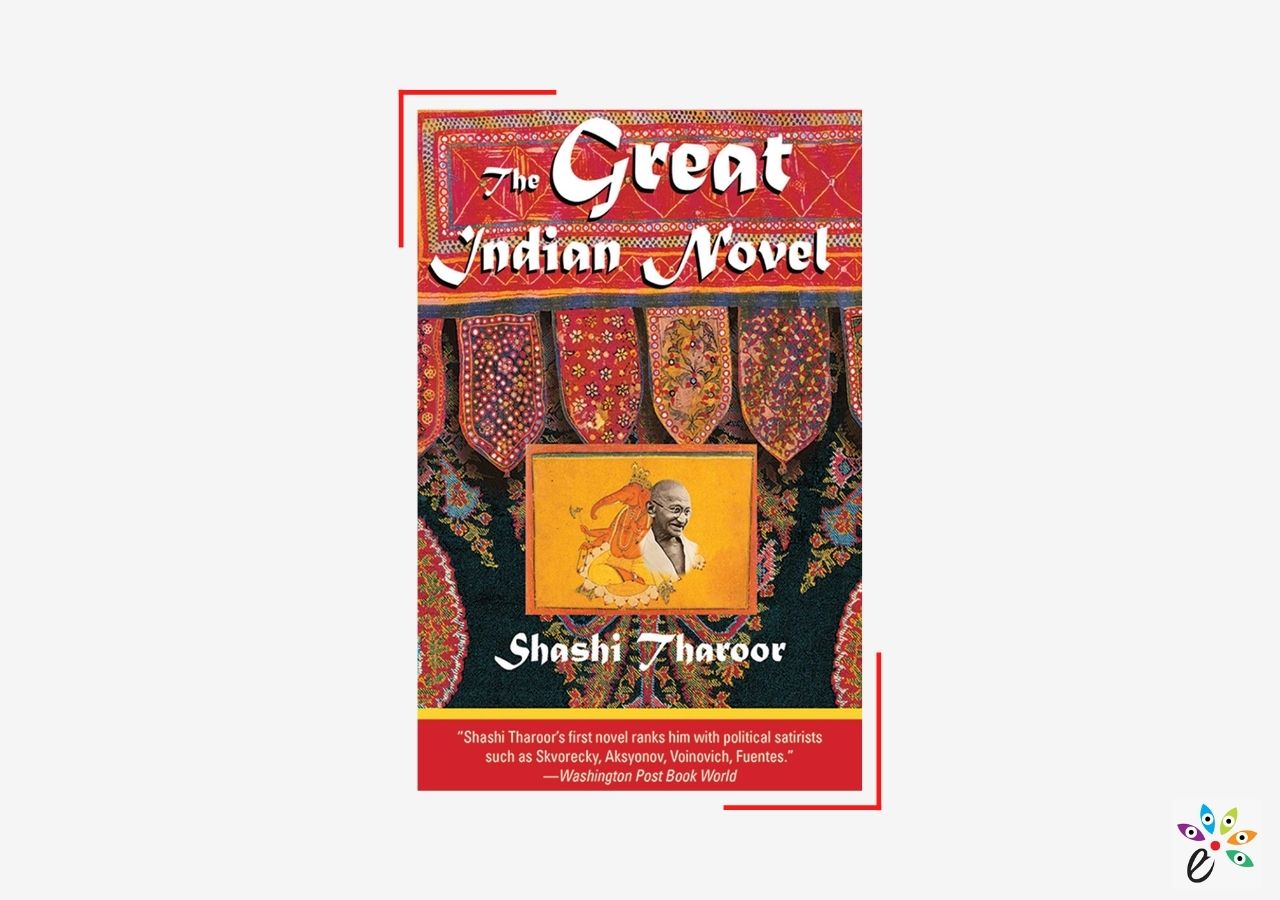 The Grand Indian Novel is a satire by Shashi Tharoor. The Mahabharata, a Hindu mythology epic, is a fictitious work that is re-examined and reseted within the context of the Independence Movement and the first three decades of its independence. Indian figures have been converted into mythological characters and India’s mythical history is recalled as the history of Indian independence following throughout the 1980s. The satire implied in the title pervades the pages of the book, a fictitious portrayal of two of Indian history/ mythology’s essential components – Mahabharat and British Indian politics. Well-known characters washed off their colours, repainted and reintroduced. And the reader is struck by the author’s utter naivety and occasionally boldness. The novel calls for audacity to depict in human light on the gods and demigods of India, which is what Tharoor has done. Read this if you can take your history with a pinch of salt.

10. A History of Ancient and Early Mediaeval India: From the Stone Age to the 12th Century by Upinder Singh 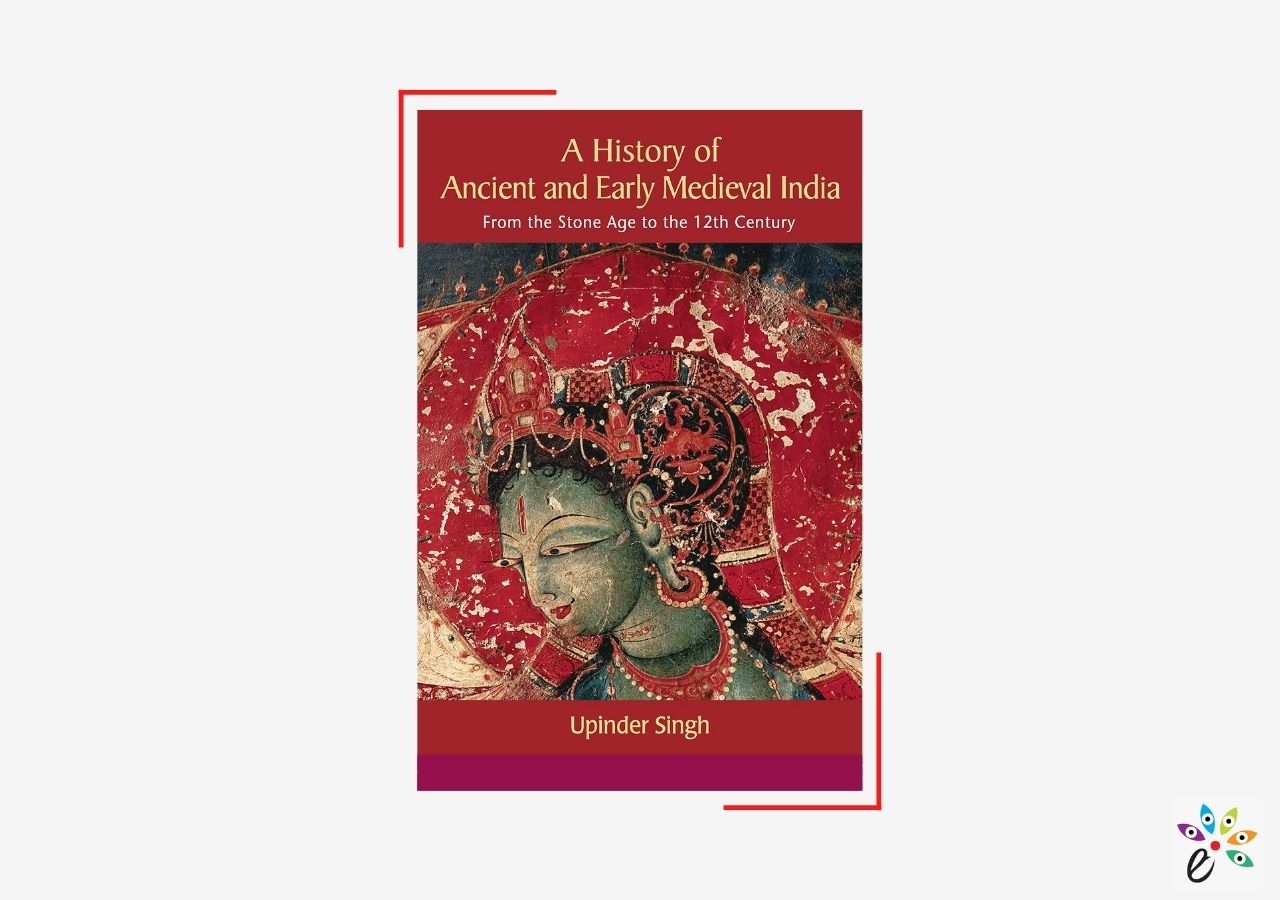 This book has been developed for academics and students of antique and early mediaeval Indian history as a thorough introduction and offers the most comprehensive view. The vast historical compass, from the age of stone until the 12th century, is divided into chronological units and profiles of diverse geographical locations in the subcontinents are constructed. The narration of the past differs from normal text-based history writing, dealing in extensive length in prehistory and protohistory of the sub-continent. It teaches essential principles and enlightens modern discussions, discoveries and research by revealing the ways in which our past is built. Ancient and Early Mediaeval India presenting fair views, promotes readers’ individual appraisal of hypotheses, evidence and arguments, to place the main historical controversies in their contexts.

This book, maps and figures illustrated superbly with over four hundred images which helps to comprehend and grasp the material. It presents a wise, complex yet clear overview of India’s early past, and will certainly make for a splendid experience for readers.