I had the exciting opportunity to participate in the Indian Art Festival, which celebrated its fourth year of inception. The festival was established in 2011 as a podium for showcasing fine art and bringing together artists from all around the world. The gentle mingling of artists and art enthusiasts in the diverse galleries was a tribute to the mesmerizing display of talent. Every gallery had something new to offer. As no two fingerprints are same, no two works of art are similar. The paintings and the sculptures that were exhibited were the embodiment of the artists who were not novices in any way. They had bared their soul on canvas and placed it on display for art connoisseurs at the Indian Art Festival. 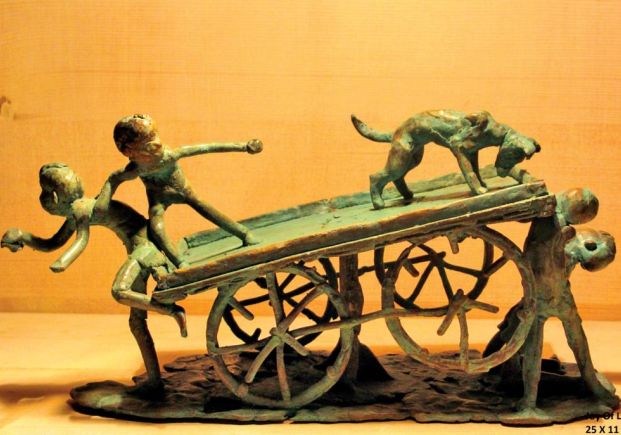 The Indian Art Festival saw over 300 individual artists from 50 cities across the world come together to display their talent. When the talent pool is so varied, discussions had added flavours. The paintings and the philosophy behind them had different roots, but they did combine to create a multifaceted art show.

During the four days of the festival exposition, artists, art critics, gallerists, architects, historians, museum professionals, cultural organizers, art connoisseurs, media publishers thronged the elegant setting of Nehru Centre, located in central Mumbai. The venue, Nehru Centre in itself is a grand place with a rich history. The festival was spread across the centre with the ground floor covered by exhibitions of 33 different art galleries, while the second floor had stalls for solo and group artists. There were 86 booths each hosting a dynamic talent of its own.

Eminent speakers took to stage and discussed on topics like ‘Why Exhibit’, ‘The Exhibition as a Variable Medium’, ‘The Exhibition by Other Means’, ‘Exhibition and Its Backdrops’, ‘New Publics for the Arts’ etc. The speakers reflected on various issues like how an artist plays the roles of curators and poets, how this affects the artwork and why it happens that the artists have to take up these responsibilities. The thought process of an artist, the way they think and process the ideas before they put it on paper and how the process brings out a change in their paintings were also discussed.

The art show had many painting techniques on display. The most popular one was the classic ‘oil on canvas’ painting. Mix-media, pallet knife, oil and acrylic were also the favoured choices. Charcoal and ink paintings were comparatively few. Another the interesting art form on show was installation, which gave a 3D effect to the painting by using natural elements like leaves or wood to bring about the actual feel of the place. Modern art is a difficult artform to comprehend for a novice like me, since it needs a trained eye to grasp the beauty of this contemporary art form. Going by the consensus, we can say it is very well received.

Moving from techniques to themes, I found that the spiritual aspect of Indian culture was beautifully depicted on canvas. Radha-Krishna remained one of the most captivating subjects for artists. The mischief in Krishna’s eye and the redness of Radha’s cheeks were beautifully and artistically captured in vivid colours. It is noteworthy that even after all these years; artists haven’t had their fill with the enchanting Kanha and still paint his expressions on canvas. Similarly, paintings of Hindu deities Ganesh, Hanuman and scenes from Ramayana, Mahabharata were quite prevalent. 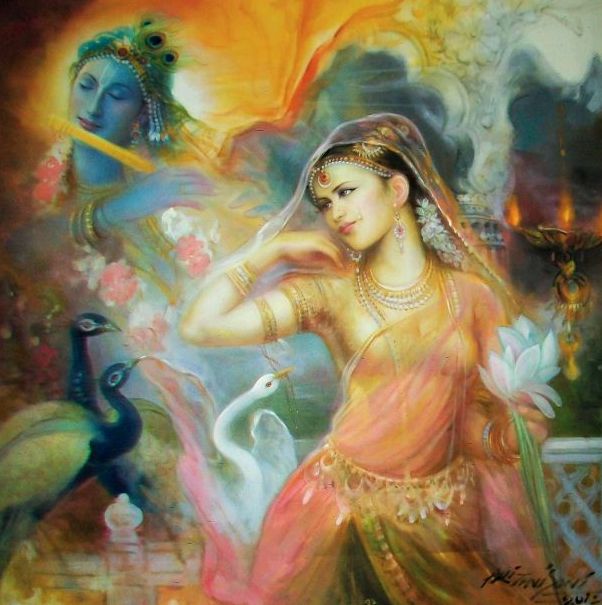 Spirituality and freedom was another major theme that was displayed generously. Right from Feng shui to Aum, the concept of peace and stillness was put on paper; some artists used a riot of colours, while some went for subtle impressions. The art conveyed every bit of the artist’s feelings, be it storm or calm. Certain pieces captivated you, drew you in and hit bulls-eye. The artists look at the brushwork or the use of light, a novice looks for the feel. A perfect piece would have both; it will speak to you in a different language on a different level. The festival had a treasure trove of such talent and evidently these four days were pure happiness for art lovers. 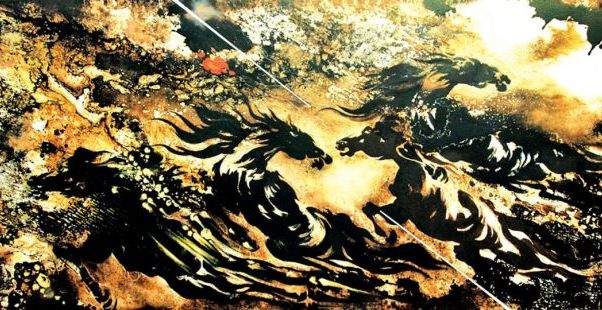 Animals were another preferred theme at the show. Horses were particularly loved for they are considered to be the ambassadors of freedom, of protection and of strength. The beauty of a herd of horses running in rhythm was a challenge taken up by many artists in the festival.

Wildlife photography was another art on display where the tiger’s eyes shone as he lapped water from the stream. The ferocity of the animal and the gleam of its fur can be seem clearly in Anand Anikode‘s work. 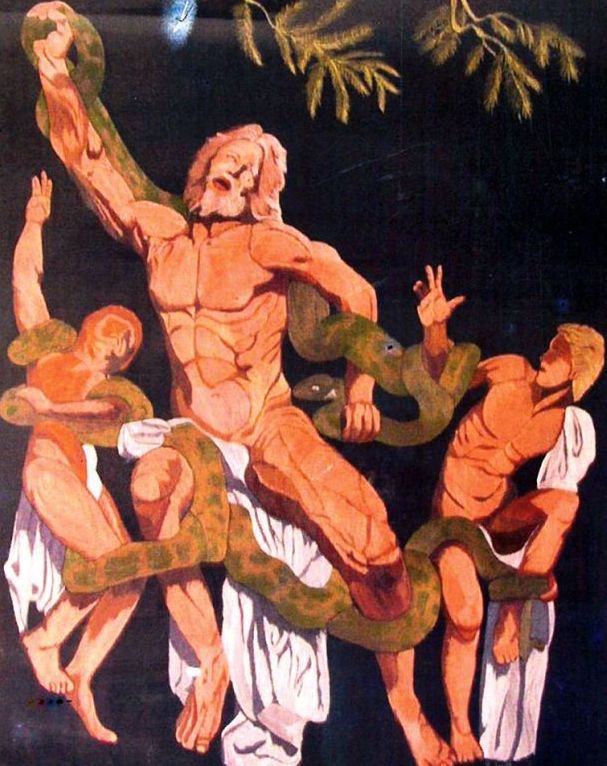 Vibrantly coloured peacocks were captured on thread work by Rajrani Sisodia. The colour shades were brought about by the intricate use of thread and needle work. The minute details and the captured effect were breathtaking!

Pramila Giria – Behind the Mask 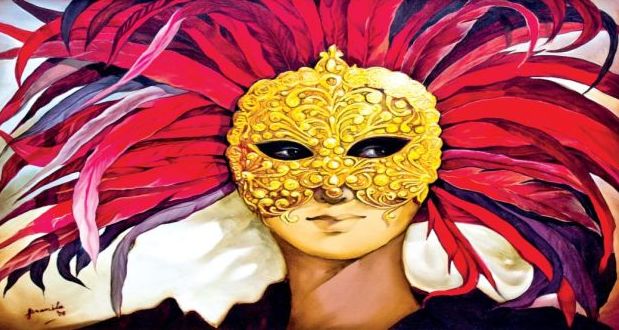 The concept of Feminism beautifully portrayed on canvas. The piercing eyes of the portrayed subjects will bore into your soul as you look at them look at you. Further, the vibrant colours add to the enigma of feminine power. 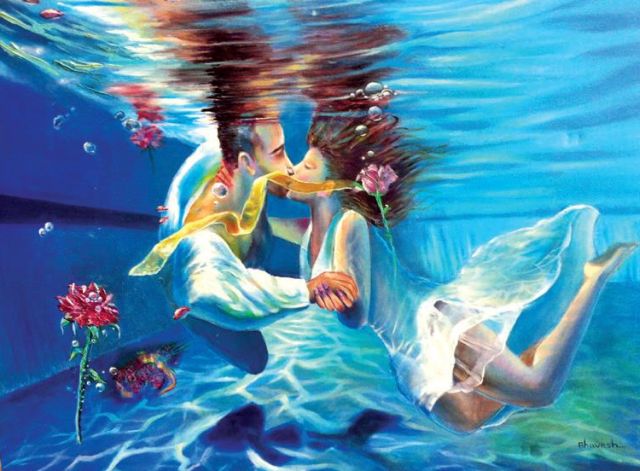 Water was another concept marvellously used in the expression of feelings the rise and fall of the tide, the play of light on every droplet and the addition of human emotions make water a sophisticated and rich subject for artists. Bhavesh Patel’s work was particularly noteworthy.

Indian Art Festival doesn’t allow any amateur or novice artists to feature their work. The art work has to be of professional standards. When the show has works of eminent artists such as M F Hussain, S H Raza on display, even seasoned artists hesitate to share the stage. However, this proved to be a myth when the Sharma siblings all of 15 (Siddhidatri) and 10 (Siddhesh) years of age were accepted as participants two years back.

Since then, the Mumbai-based siblings have consistently stumped the art world by displaying unbound talent with no formal training. They have exhibited their work which is on par with professionals. When we look at their artwork, we cannot possibly guess it to be a child’s brushwork. 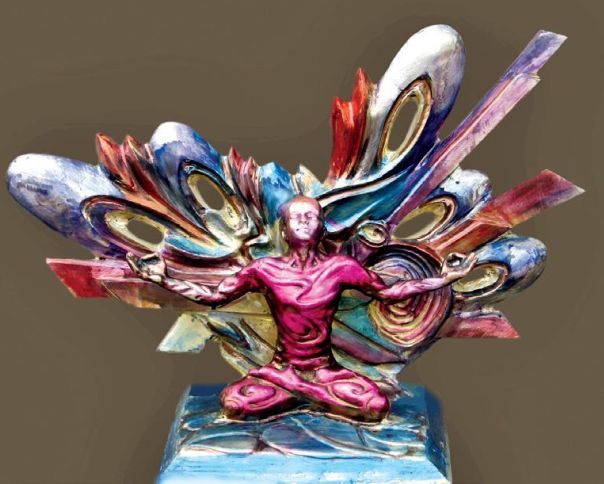 We shouldn’t be mistaken in thinking that the Indian Art Festival was all about paintings. Sculpture works also took their appropriate praises. Some of the bronze and metal works were beautiful. They brought to life the joys of childhood and imaginations of artists. The sheer detailing in some these pieces can captivate you for a long time.

Thus, the Indian Art Festival proved to an ideal platform for every artist and art enthusiast to be part of the rich talent pool we have in our midst. A big reason to move away from the daily TV sitcoms and chat rooms! The festival and art in itself is a wonderful way to engage and challenge your imagination by the storm of talent that artists unleash in such a platform!

The Story of Madhava and Kandala in Miniature Paintings