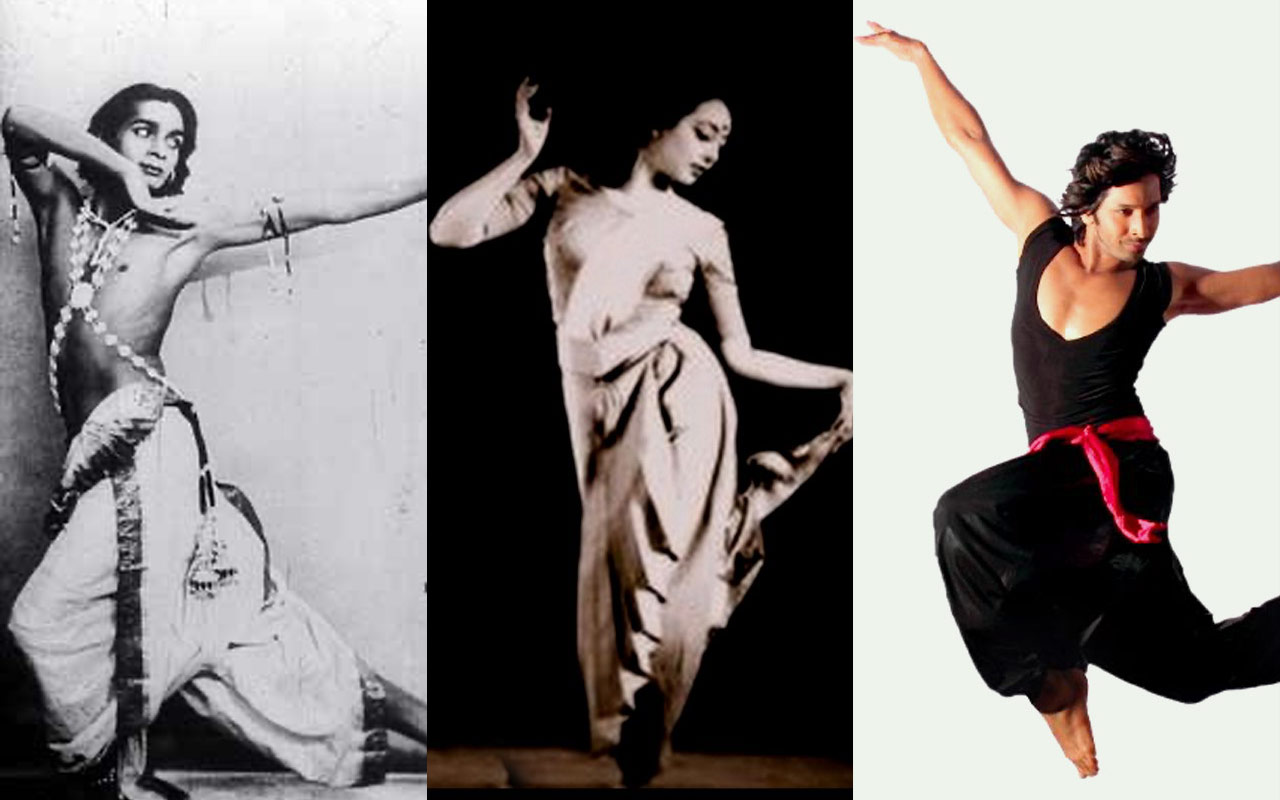 The definition of Indian contemporary dance ranges over a variety of styles that are flexible and individualistic. It can mean Bollywood movie choreographies or a fusion of the East and the West. It is imaginative and can form an unprecedented league of its own. Most importantly, Indian contemporary dance is that which veers away from the strictures and codifications of the classical forms.

Although classical dance forms of India are revered as indispensable in terms of cultural heritage, contemporary dance has achieved its deserved honors and took its place in the spirit of dancers and audiences alike. We explore today some of the significant names who brought fame and development to the field of Indian contemporary dance.

Uday Shankar was an idealist who sought expression through various genres of dance. During the 1920s, Shankar was learning ballet in England. Soon, he was chosen by the Russian ballerina Anna Pavlova as her partner in the ballet titled ‘Radha and Krishna’. The series of ballets that he performed with Pavlova was based on Indian stories and exhibited an Oriental feel in costumes and narrative.

On his return to India, Shankar blended modern musical sounds with those of classical instruments. He employed classical and folk elements in the music and put up a ballet stage of such brilliant Western and Indian classical amalgamation, unlike anyone, ever seen before. These performances included ‘Shiva-Parvati’ and ‘Lanka Dahan’. Shankar deftly incorporated socio-political themes in ‘Rhythm of Life’ (1938) and in ‘Labour and Machinery’ (1939). In 1939, he established the Uday Shankar India Culture Centre at Almora, where originated the Pan-Indian dance style.

It was his wife, Amala, who had suggested keeping the Indian word ‘Kalpana’ for their film, instead of ‘Imagination’. The dancing couple took charge of the lead roles and their Shiva-Parvati dance remains a wonder to date. Shankar choreographed over 80 dances for this film, and thus, it is considered an invaluable archive for dancers today.

Shanti Bardhan was a junior colleague of Uday Shankar. Bardhan’s imaginative excellence is portrayed in the dance that he produced in the 20th century. He founded the Little Ballet Troupe in Andheri, Bombay (Mumbai), in 1952. The dance drama ‘Ramayana’ involved the actors gesticulating and dancing like puppets. Bardhan’s posthumous production ‘Panchatantra’ (The Winning of Friends) was inspired by an ancient fable of four friends: Mouse, Turtle, Deer, and Crow. Here, he used masks and the actors mimed the movements of animals and birds.

It was the exemplary dancing skill of young Amala that led Uday Shankar to choreograph ‘Kaliya Daman’ for her to perform in Belgium, 1931.

In 1938, on their return to India, Amala joined the Culture Centre at Almora. She acquired the dance techniques developed by Shankar and carried the legacy with honor and grace.

The strong-willed Amala was also a tremendous support to her husband other than being an exuberant performer who developed her dance personality. Amala choreographed the shadow play ‘Life of Gautama Buddha’ and took up the leading role. Skilled in stage direction, she also designed the costumes and painted slides for projection. Amala Shankar went on performing well into her old years.

While staying in New York, Manjushree Chaki Sircar came across the new developments in contemporary dance that were brought about by Martha Graham and Merce Cunningham. She founded her school of dance and began developing a new form that she called Navan Nritya. The techniques of Navan Nritya drew inspiration from major Indian classical and folk dance forms, such as Chauu and Thang-Ta.

Manjushree returned to Kolkata in 1979 and, alongside her daughter Ranjabati Sircar, she built the troupe of Dancers’ Guild. She ventured into extensive research and formulated the rules of her new dance style. Among her numerous productions, ‘Tomari Matir Kanya’ was an inspired version of Tagore’s ‘Chandalika’. Another masterpiece ‘Aranya Amrita’ was based on legends of the Bishnois, ‘Krouncho Katha’, ‘Parama Prakriti’, as well as Ranjabati’s unfinished work.

The daughter of the legendary Manjushree Chaki Sarkar, Ranjabati Sircar was a treasure trove of talent, strong persona, and hard work. Ranjabati and her mother established the Dancers’ Guild which focused on feminist themes and was deliberately revolutionary. The choreographies derived elements from folk arts, myths, and legends and created beautiful, unique contexts for the story of the Navan Nrityam performances.

Beyond the borders of India, she thrived spellbinding stages during Festival Creadores and Festival Danza por la Vida, both in Caracas. She also participated in the Vivarta Festival, London, while onboard Queen Elizabeth II, in 1994 and 1995. At the Maison des Cultures du Monde, Paris, 1996, she performed a work titled Wounded Earth. Ranjabati was honored with the Dance Umbrella Award.

In 1977, Deboo returned to India and trained under Guru E. Krishna Panikar in the classical dance form of Kathakali. Deboo’s extensive training in various forms of dance, both Western and Indian classical, helped him build an outstanding amalgamation of techniques derived from worldwide dance styles.

Astad Deboo’s skills and knowledge earned him notable collaborations. In 1986, Pierre Cardin had commissioned Deboo to choreograph for Maya Plisetskaya, the prima ballerina of the ballet company Bolshoi Theater. Deboo went on to work with popular personalities, including Pink Floyd, at the Chelsea Town Hall, London.

With Tim McCarthy, Deboo worked for several years at Gallaudet University, Washington. During the production of “Road Signs” in 1995, he toured India with a troupe composed of dancers from Gallaudet and Deboo’s Indian students.

Astad Deboo performed at the 20th Annual Deaf Olympics, Melbourne, Australia, in January 2005. His troupe consisted of 12 young women from the Clarke School for the Deaf, Chennai, and some of his trainees from Astad Deboo Dance Foundation. He also choreographed painter M.F Hussain’s 2004 Hindi movie, ‘Meenaxi: A Tale of Three Cities

In 2009, Deboo joined hands with 14 children from the Salaam Baalak Trust NGO and performed his production, ‘Breaking Boundaries’.

The noteworthy mark in Padmini Chettur’s dancing career began with her training at the dance company under renowned dancer Chandralekha, in 1991. During the years here, Chettur participated in excellent productions including ‘Lilavati’, ‘Sharira’, ‘Prana’, ‘Sri’, ‘Angika’ and ‘Mahakaal’. Her first significant solo performance was titled ‘Wings and Masks’ (1999). Her other exemplary works include ‘Fragility’ (2001), ‘Solo’ (2003), and ‘Paperdoll’ (2005).

Chettur’s production ‘Pushed’ premiered at the Seoul Performing Arts Festival (SPAF) in 2006. Two of her most intricate pieces of work include ‘Beautiful Thing 1’ and ‘Beautiful Thing 2’, where she explores the beauty of the body in its space.

These were performed in India as well as on international platforms. The group production ‘Wall Dancing’ was her first proscenium work. She created ‘Kolam’ in collaboration with French choreographer David Rolland. In 2016, she produced and performed ‘Varnam’.

Chettur has co-founded Basement 21, an artists’ collective which is based in Chennai, India.

Lewis has received honors like the Staar Parivaar Award for Favourite Judge and the 2002 American Choreography Award for his team choreography work in the movie Lagaan. He is the first Indian who received the danceWEB Europe Scholarship and he represented India in Vienna, Austria.

Preethi Athreya trained in Bharatnatyam and then went on to get her postgraduate degree in Dance Studies from Laban Centre, London. Athreya chose to pivot her dancing career in her native city of Chennai and, from 1999 to 2011, worked with Padmini Chettur. She has endeavored to constantly redefine the human body through dance.

Athreya aims to unravel in her dance: the process of discarding the strict codes of her early Bharatanatyam training and redefining her choreography as an agent of change. She is an outstanding performer and choreographer, the essence of whose work is enhanced by the process itself.

‘The Jumping Project’ was her ensemble work in 2015 which emphasized the discovery of the truest nature of the body, free of superficiality, that connects to the context of its experience. Some of her most significant projects are Kamakshi (2003), Porcelain (2007), Pillar to Post (2007), Sweet Sorrow (2010), Light Doesn’t Have Arms To Carry Us (2013), and The Lost Wax Project (2018).

Preethi is also one of the co-founders of the Chennai-based Basement 21, alongside Padmini Chettur and others.

Shakti Mohan graduated from Terence Lewis Dance Foundation Scholarship Trust in 2009 with a diploma in contemporary dance. Her first major achievement was her victory in the second season of the dance reality show ‘Dance India Dance’.

Mohan has mentored 4 seasons of ‘Dance Plus’, the reality television series, and appeared in several other television shows. She participated in choreography for high-profile Bollywood movies like Dhoom 3 and Padmaavat, other than starring in numerous songs.

In 2012, Shakti Mohan collaborated with composer Mohammed Fairouz on a dance project in New York, sponsored by BBC. With her brand NrityaShakti, she has also produced the Youtube web series titled “Break A Leg”, comprising two seasons.

Many classical dancers have stepped into the arena of Indian contemporary dance and encouraged fusion or creation of one or more dance styles. This is due to the rising interaction among dancers and dancing troupes from all over the world. Bringing together different cultures or styles of dance expands artistic expression. Various modern-day issues have also received greater exposure through the language of contemporary dance. And thus, it has brought together the society towards its goals of change, development, and revolution.