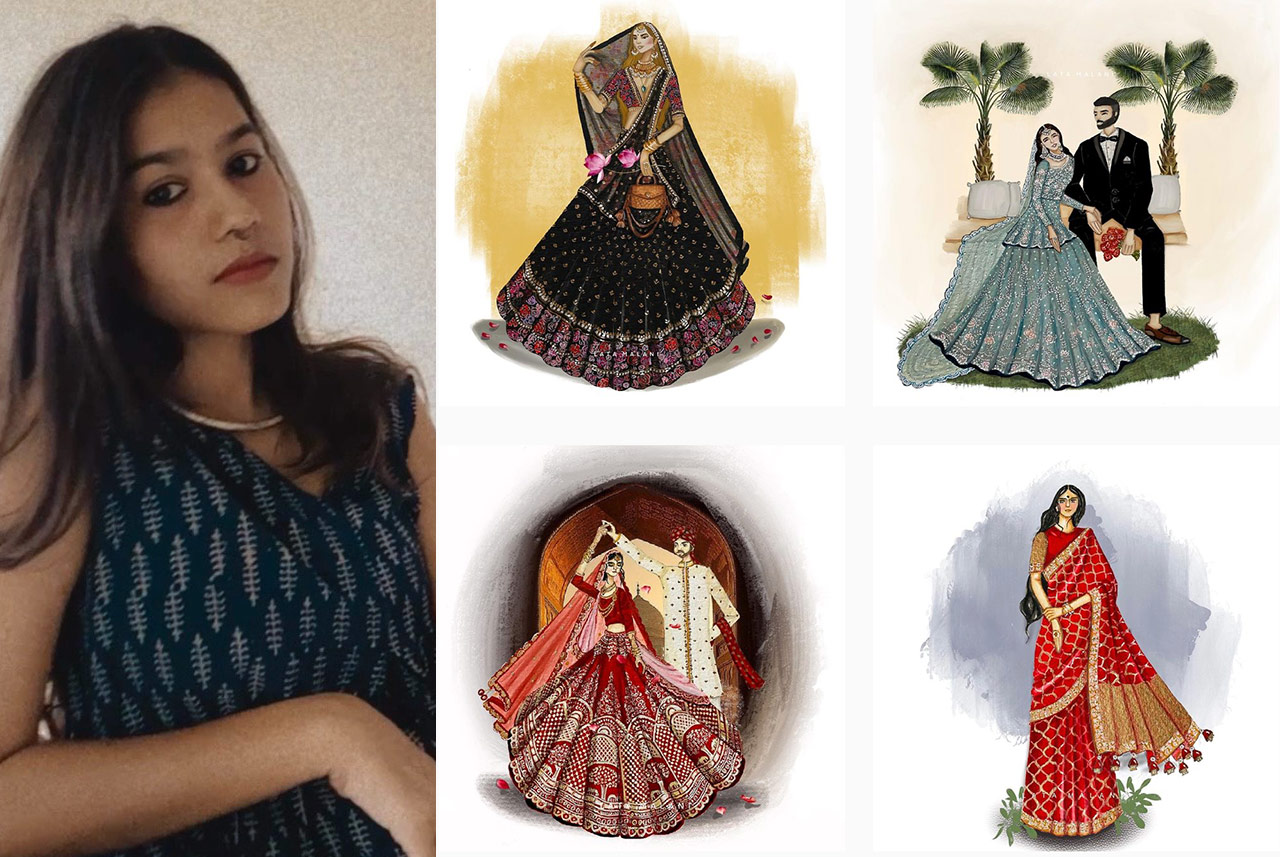 Lehenga-choli, jhumkas, sarees, kameez-salwar – Lata illustrates them all. Lata Malani, a fashion illustrator presently residing in Surat, Gujarat is a young fashion illustration wizard. Lata who is currently pursuing her bachelors in commerce has no formal education in fashion or design whatsoever. Nonetheless, designer clothes always fascinated her. Little by little, her passion for Indian textiles led her to set up an Instagram page under the name of MASO Indian Textile.

Once upon a time, Lata solely loved drawing and painting as a subject. Not long ago, she picked up her subject love as a passionate endeavour. She began her learning journey off of the internet. Eventually, she decided to give herself a break by setting up her Instagram page some 4-5 years ago. What triggered it? It was definitely her fashion illustrator-slash-her first finding-slash-her-inspiration Anoop Barwa.

Despite the self-start, her family did not support her. Their constant questions and nagging sent a shiver down her spine and posed a dilemma in front of her. A relative of hers who did happen to pursue fashion studies later dropped out. This continues to serve as a specimen for others who even remotely think of entering this stream. It is deemed as a habit that most girls do but later drop out from. Another reason is that most boys in her family pursue Chartered Accountancy. Thus, the others must follow.

The Curious Case of Anoop Barwa

Lata’s curiosity spoke when she wondered how one could go into such detailing vis-à-vis looking at the designs created by Anoop Barwa. Even though she started practicing 3 years ago, she was placing herself in comparison with Anoop, which as she says was unintelligent. But, with mindfulness, she realised she was comparing the practice of a few weeks to the dedicated practice of years of Anoop’s. With such a thought, her work started improving gradually. 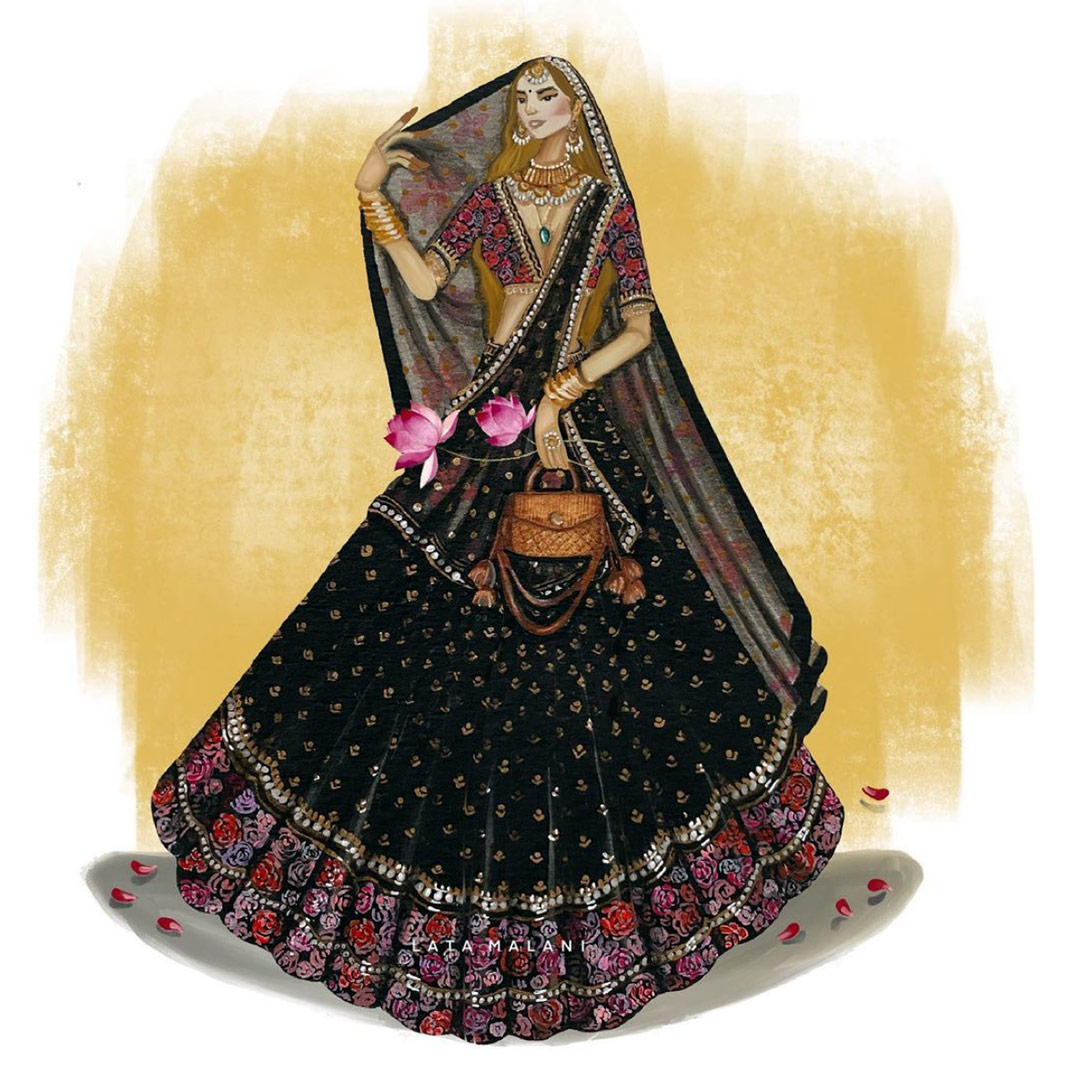 You know those few months when you are toiling hard with expectations at bay? That is when Lata received her first work. Doubts resurfaced her family again, reinstating that she is going off track. But Lata kept her patience. Soon her earnings skyrocketed. This is exactly when her family realised what she was doing had a future attached to it. AND they asked her to join an institute (finally).

But things weren’t as easy as they seemed – first her father expired, then her brother was getting married, and then covid happened. She could not join the institute of her choice. Without further ado, she enrolled herself in an online course and engrossed herself in the field of illustrations only.

But the challenges were manifold..

For a young learner, demotivation in the forms of doubts, constant fear of losing, self-doubt, a state of confusion, was suffocating. Another artistic challenge was artist’s block. Often, she would start an illustration and leave it midway. In a moment, her interest flourished when she decided to devote herself to the recreations of several designers. To name a few, she chose pieces by Anita Dongre, Anushree Reddy, Sabyasachi and more.

Most of Lata’s clients are foreigners, approximately 90% are spread over the world. The biggest challenge here was adjusting her time according to her clients abroad. The deadlines were set in sync with the clients. One such client who resides in the USA sent her a query for a wedding card which involved quite a lot of detailing. This particular card took over a month to complete 4 illustrations. And most recently, she received commission work from Brand Meenakari and Diva’ni.

At the moment, Lata is devoting her time towards fashion and jewellery illustrations simultaneously, where work is short-timed. 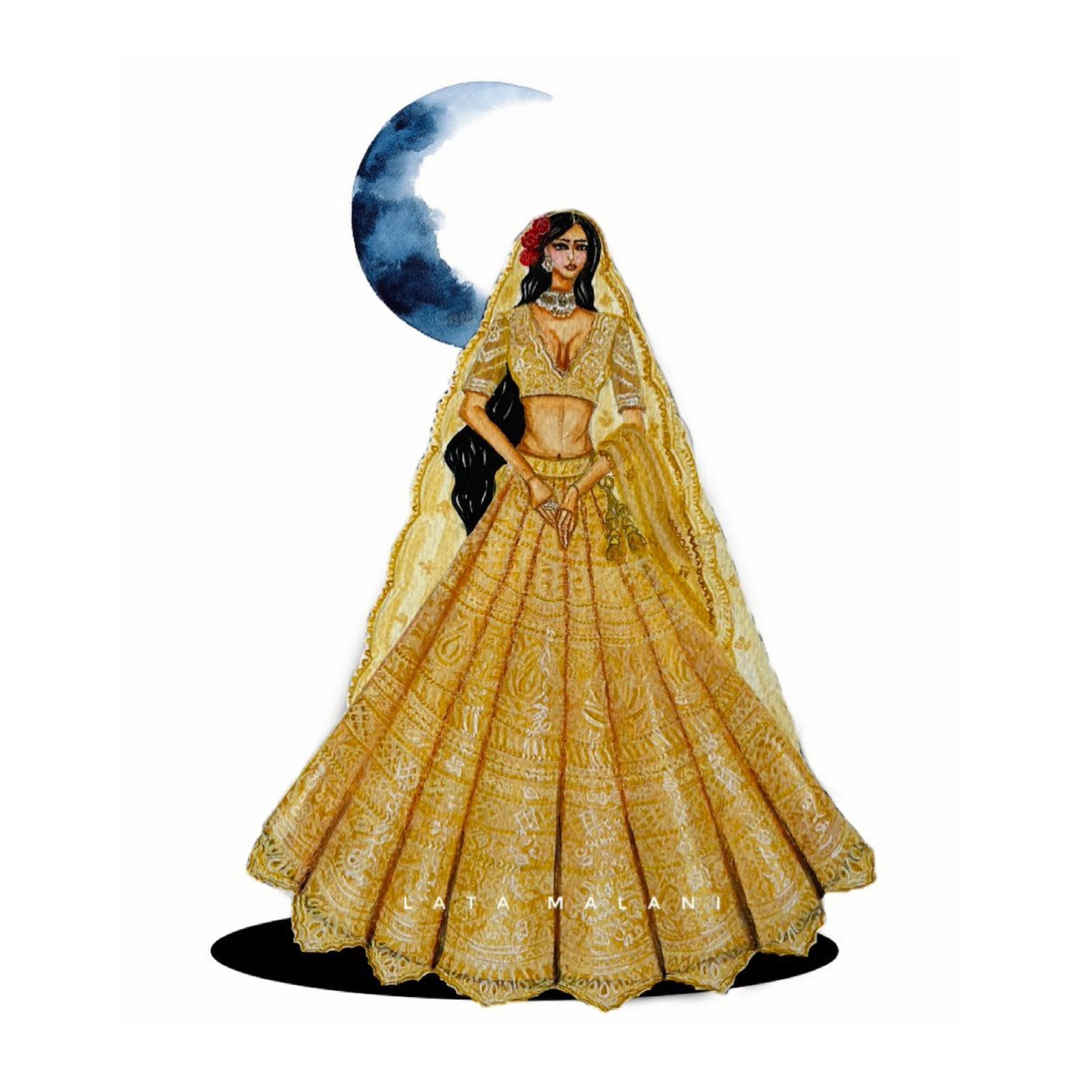 The experience of working with such big brands was overwhelming for Lata. Having worked with a popular designer (name shall remain undisclosed), she received guidance from him and his team. Nonetheless, she found the motivation and the validation that was missing earlier. Moreover, her illustrations were a star in themselves which made her stand out in a world of designer clothes.

Any designer aspires to view a summarised look before it takes the form of an actual attire. The first step is the imagination, the second step is the illustration and the final step is the creation. For instance, a lehenga is red but one wants to add a different color, or a lace here and there. An illustration helps the designer to get a clearly rough idea of what the final piece would look like.

Choice of Indian Women as Subject 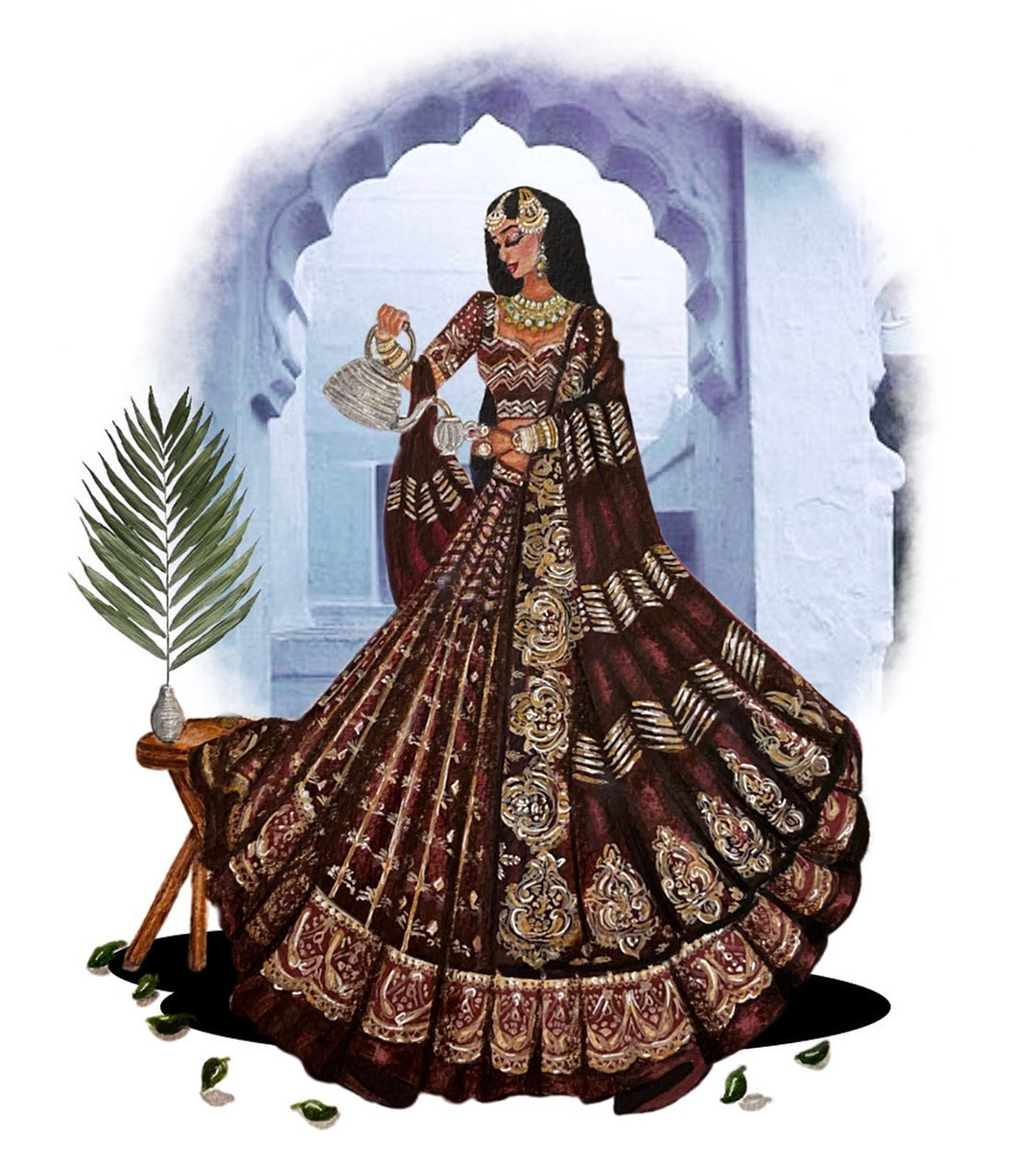 Personally, Lata has been an ardent admirer of Indian women, their body type, their clothing and finally turning them as the subject of her illustrations. For now, she illustrates traditional Indian wear only, but for commission work, she does not hesitate experimenting with western wear.

One thing that is worth noting and as Lata mentions is that although the attire and fabric is as per Indian standards, the body, hair, and skin color are not. Once adorned, even the blonde subject begins to look like an Indian woman.

As a creative person, one has to think 10 steps ahead of other designers (read competitors now). A lot of people are constantly waiting for your fresh ideas, which is why repetition, plagiarism, and recreations are not welcome anymore. While the audience can help you in gaining popularity, they are also at their quick wits to criticise. Lata does not believe in poor publicity.

One of her reels garnered her 4k views which later shot up to 1.8 million in just a month! Later the views for the yellow saree reel followed and increased. When asked about the process of recording videos, she stated that she records with her phone in one hand while painting with the other. Indeed, practice (here, a steady hand) makes a woman perfect.

As a one-woman-army, she has to handle everything. From illustrations, to recording with one hand, editing the bits and pieces together, curating the content, adding a suitable song – everything is her job.

In the month of September, one of her reels received a crazy response! There were new comments almost everyday; people were sending in love and appreciation through DMs; it was tough to keep a track of each comment for Lata. She then recalls her first critic who wrote ‘Everything except the face looks good’. Although Lata is not a fan of criticism, she enjoyed her first criticism.

Once upon a time, Lata had an oops moment when one of her young cousins spilled some remaining water droplets off the brush over her artwork, particularly on the groom’s side, something that took 3 to 4 hardworking days to take shape. The piece was almost ready. For a moment, everything seemed gloomy and lost to Lata. With no room or mind for recreation (since she was on a deadline), she applied a quick recovery technique. She wiped off the excess water with tissue since the color was light. Since then, she continues to impart this tip to other artists as well in her workshops. 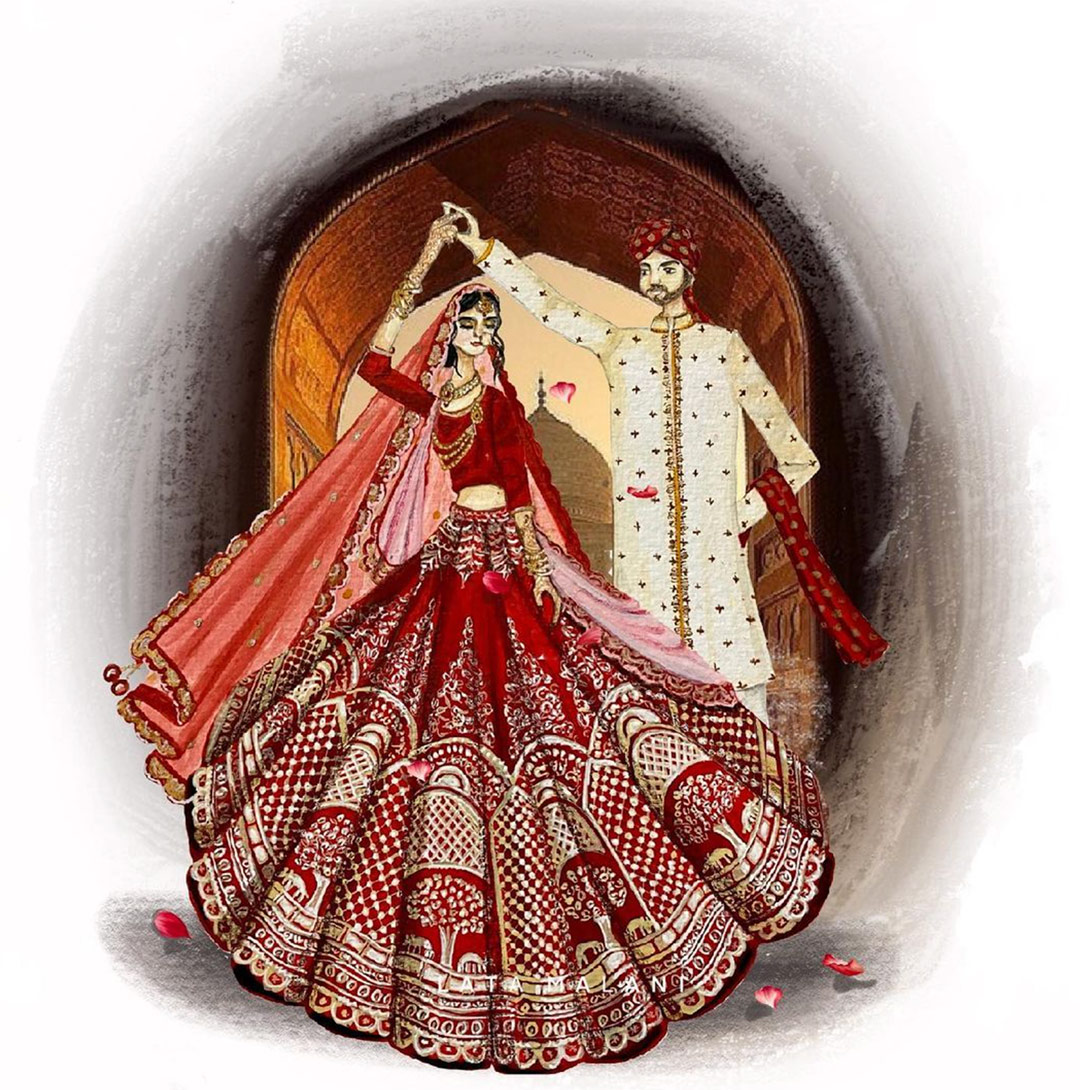 When asked about her objective, she states that she wants to educate the masses about patterns, fabrics, textiles and motifs. She wishes to design garments vis-à-vis informing others.

Since she herself has no formal education in the same, she continues self-study. However, she does believe that a certification or a degree is the trophy that completes a home. With a formal education, she would diversify into the luxury market and work with Indian artisans, craftsmen and designers. That is why she has enrolled herself in the course offered online at London School of Trends curated by Manish Malhotra. The course concludes in June 2022.

When one of her reels went viral, the views of the other reels soared as well. This is when her first ever earring illustration which she illustrated for Sunita Shekhawat Jaipur was noticed. Soon, she received commission work for jewellery illustration and luckily, the clients loved it.

Couple illustrations for wedding cards or posters is a great way of acknowledging the couple’s journey. It seems that you are a part of their journey and that their love story is valid. Lata shares the story of a couple where the girl was Hindu and the boy was Christian. She was faced with the decision to portray a semblance of both the cultures as well as their journey. The rest is history. 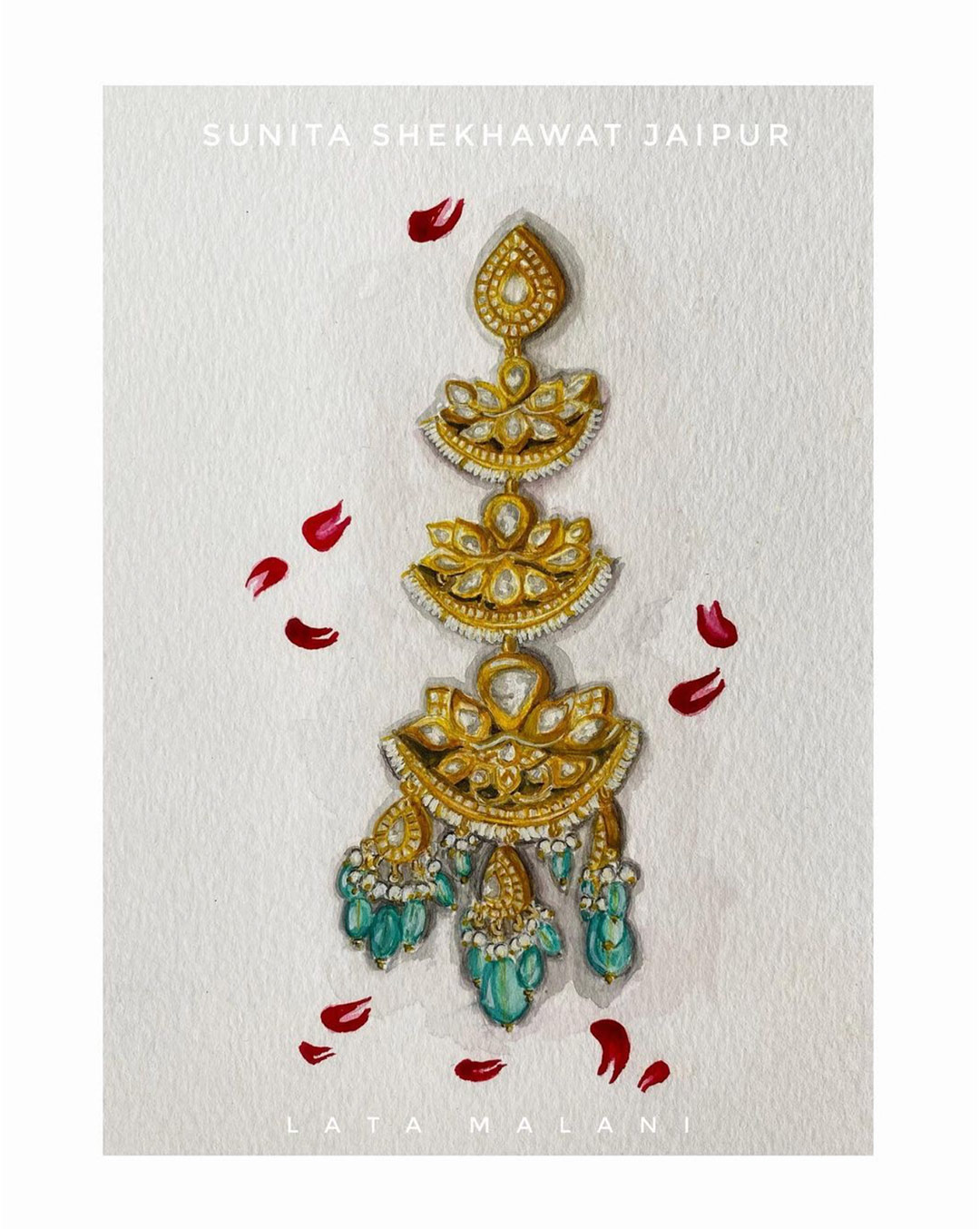 Lata has given 5 online workshops up till now. These workshops are of 2 days wherein she teaches students several techniques and step-by-step illustration. This workshop stands at a cost of 1000. Lata will be hosting a full fledged 2 month course as well once she has a few things sorted for herself. Lata always insists everyone to follow their personal style of illustrations. In her own words, she adds, “There is nothing like a specific technique; technique is your way, the one which makes you feel comfortable in it.”

“Would I want to try out illustrations centered around Indian men? The answer is absolutely.” For now, she is focusing on commissioned work for couples. Lata may diversify into handbags and footwear too in the future.

Additionally and without a doubt, monetary benefit is something that she aspires to gain. Exploration of other thingummies follows. She does state that she started drawing as her hobby, designing continues to be her dream, and illustration was born as an outcome of both. No doubt, she wishes to garner a job experience beyond virtual theory. She wishes to learn several skills on the go such as tête-à-tête conversations, client needs and more.