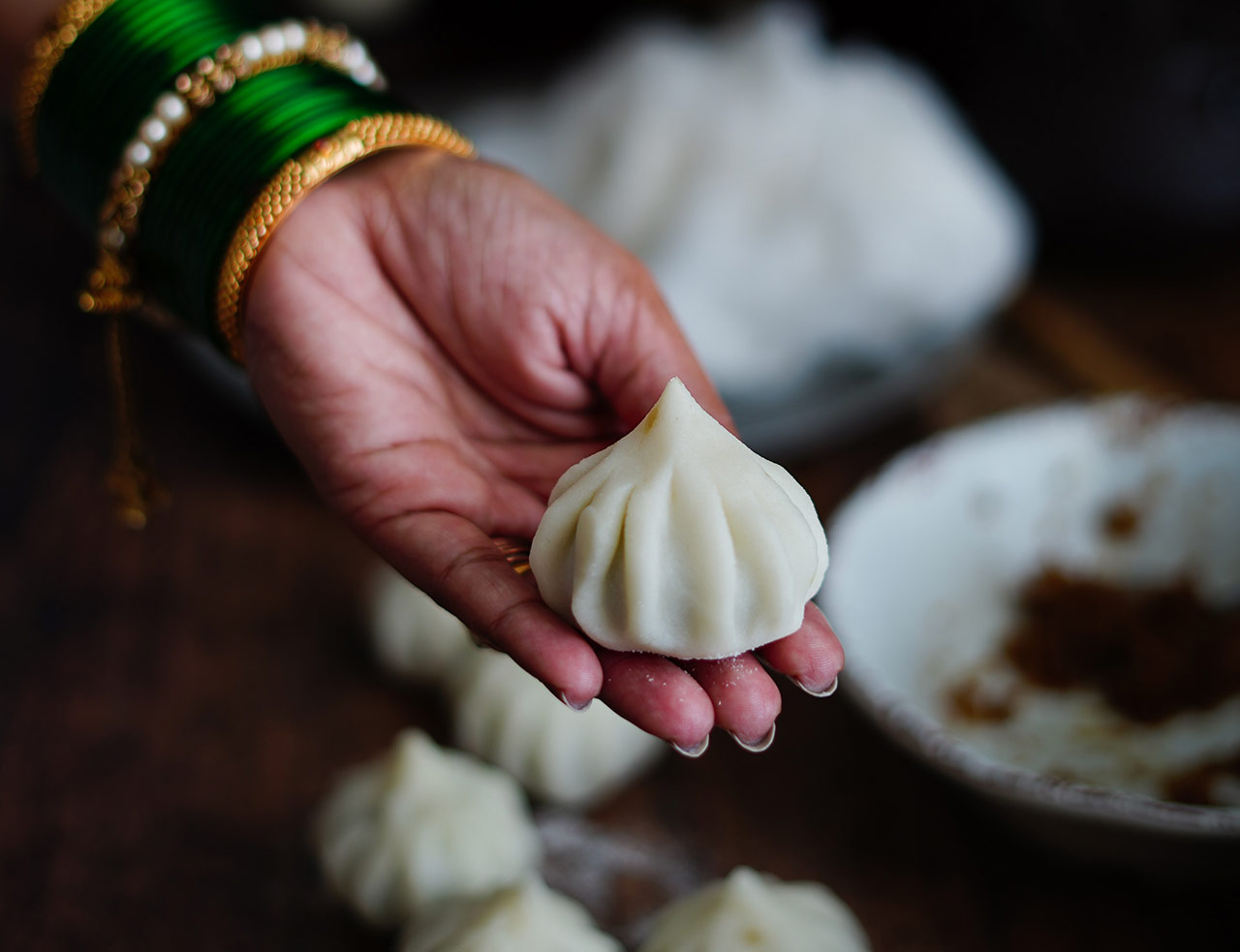 If you’re craving highly spiced treats, indulge your flavor buds in some Maharashtrian dishes. It features a range of moderate to strongly spiced foods. Each cuisine from the Maharashtra represents the region it hails from. Maharashtrian cuisine can be recognized by two different styles – Konkan and Varadi. Konkan has influences from the coastal regions of Goan, Saraswat, Gaud, and Malvani. On the other hand, Varadi cooking belongs to the area of Vidarbha. The state’s fundamental ingredients consist of wheat, rice, jowar, peanuts, plenty of spices and herbs.

In a Maharashtrian kitchen, there are certain spices like the Goda Masala, the Kokum, the Tamarind, and the essential Coconut. Since Maharashtra is a large state, people’s cooking preferences vary from region to region. You must visit this state if you’re a foodie and try out their most quintessential foods.

Pudachi Vadi is the most popular traditional recipe of Vidarbha.

The filling uses delicious fresh onion, poppy seed coriander, and copra. The pocket, also known as Pudi, is filled with this stuffing, hence the name. It is then packed in an outer layer of gram flour and is deep-fried. The Pudachi Vadi should be carefully fried to perfection. This is a good choice when you need delicious and healthy snacks – although it is deep-fried, the stuffing is healthy as it is packed with coriander and coconut. These lightly-flavored fried Vadis are delicious when paired with hot masala tea. This snack is mostly made during the winter when there is plenty of coriander available.

Although popularly savored during festivals like Gudi Padwa, Holi, Ganesh Chaturthi, and Diwali this delicious flatbread can be eaten at all times. The Marathi name of the dish comes from ‘Puran’ which is a sweet lentil mixture and ‘Poli’ the bread. You will be surprised to find that Puran Poli can be compared to Obbatta or Holige prepared for Ugadi celebrations in southern India.

The filling consists of peeled and chopped black chickpeas, also known as Bengal chickpeas. Raw sugar made from sugar cane juice is the sweetness component of this dish. The poli is made of various kinds of wheat flour (atta) and flour (maida). To get a golden color, some ground turmeric powder is added to the dough. To make the mouthwatering dish at home, you need some fennel, nutmeg powder, cardamom powder, and turmeric for the spices.

Pandhra rassa, prepared with coconut, is a chicken or mutton stew. It is a well-known dish taken from Kolhapur cuisine and is usually served with the spicy tambda rassa. The Marathi term, Pandhra Rassa, literally translates to white curry. Rassa is a soup made from coconut milk, cashew paste, sliced onions, chilies, and other spices, paired with the broth acquired from the bones of the meat. Typically when the mutton is cooked in Maharashtra, it is made to be hot and spicy. Therefore to reduce the heat of the mutton curry, this rather mild and creamy soup is created. This balances the meal overall and facilitates easy digestion. It has a unique type of flavor that stays on your taste buds and hearts for a long time.

It is a magnificent stew in which every flavor on the dish is savored without overwhelming the other and yet it all shines in a beautiful and wholesome way.

Pav Bhaji is probably considered to be Mumbai’s most popular street meal. This combination is an enjoyable treat for all ages: spicy, soupy, crunchy vegetable blend, tawa fried in a unique mix of spices, served with two or three slices of the city’s famous laadi pavs, drenched in butter, chaat masala, and onions. ‘Bhaji’ means a thick vegetable curry in Marathi and Hindi, while ‘Pav’ is a soft roll of bread. Potatoes, onions, carrots, chilies, peas, bell peppers, and tomatoes may usually be included in the curry. Street vendors normally make their curry on a flat griddle (tava) and serve it hot. Pav Bhaji is a delicious weekend dinner option and a pleasurable favorite for parties.

The humble Pav Bhaji has now gained national and even global recognition, and is served with mozzarella cheese as a side dish and grated paneer, and mushrooms are usually served at stalls or small vendors in remote corners of the city. You name it and Pav Bhaji has a version ready to match your personality!

Thalipeeth is a traditional Maharashtrian flatbread, called so for the form of dough pressed into the palm. It may be prepared with several ingredients and flour mixtures, but they all require the dough to be pushed into a flat disc using an open palm. This is because the dish does not contain gluten and hence cannot be rolled up or extended in form.

Thalipeeth is also known in certain areas as dhapata since it means to pat(into shape). A multigrain meal mix called bhajani is used to make the most famous version of Thalipeeth. The dough is combined with the chopped onions, herbs, and other ingredients, and then patted flat on a tava, flaky fried in a little oil, and served with fresh butter and spicy thecha. This flour involves first roasting rice, milles, and lentils, then ground to mix in the dough. Bhajani means roasted flour. It is the best recipe to clean up leftover lentils before storing the fresh harvest of the year.

Bombil Fry is a fried bomb or Bombay duck that has gained fanatical status over time. This curiosity is not a duck, but an extremely fleshy fish. When shallow fried, it reaches a crisp exterior in a coating of semolina and rice flour with a soft buttery texture inside. This Bombil fry is perfect for days when you’re looking for fried, crunchy, and decadent. For more zing, top off it with a dab of lemon juice. This classic delicacy will definitely appeal to seafood lovers because Bombil’s bones are very soft.

Another reason people like it so much is that it does not take long, all you have to do is to cover the fish in a mixture of rice flour, red chili, lemon juice, and turmeric powder and fry until it’s crispy and golden brown. The delicious Bombil Fry is a favorite on the menu of any seafood restaurant. It’s certainly one of Mumbaikars’ most popular fish. Mumbaikars prefer to buy dried forms of this lizardfish, especially during the monsoon seasons when fishing halts off the west coast of seawater. In the summer, when you are in Mumbai, this fish is very common, see if it can be dried on a rope running through the branches.

The most prominent festival in Maharashtra is Ganesh Chaturthi. To promote culture and nationalism, the great Maratha leader Chhatrapati Shivaji Maharaj started these celebrations. In the worship of the Hindu god Ganesha, Modaks have always had special importance. In Hindu mythology, Modak is considered Ganesha’s favorite dish, which is why it is also called Modakapriya (people who like Modaki) in Sanskrit.

Modak, a sweet dumpling, can be either fried or steamed. The soft shell is made of rice or wheat flour, but it is also made of khava flour or maida flour. It consists of freshly shredded coconut. The steamed variation, known as the ukadiche modak is consumed warm with ghee. Other versions such as ragi modak, motichoor modak, and chocolate modak have grown rather famous with extensive creativity in the kitchen by professionals and home cooks alike.

As per religious traditions, Ganesh Chaturthi ends with an offering of twenty-one modaks to the deity and is ultimately served as prasadam to all the devotees.

If you are wondering what to do with excess coriander leaves in your fridge – think no more!

Use them for this wonderful Maharashtrian snack named Kothimbir Vadi consisting of gram flour and coriander leaves. Kothimbir in Marathi refers to coriander leaves, while Vadi stands for steamed cakes, which are deep/pan-fried. The steamed cakes are made of chickpea flour and finely chopped coriander leaves. It also includes essential spices and peanuts (Shengdana kut). A medium-soft dough is steamed, sliced into thick pieces, and fried. These vadis can be prepared with a range of leaves – Methi, spinach, etc. Alternatively, a steamed version of it can be tempered with some oil, mustard seeds, hing (asafoetida), and curry leaves. This delicious coriander cake, which is fully gluten-free, vegan, and can be frozen for later use, is great as an appetite, a snack, a breakfast, or an aside.

Misal is Maharashtra’s popular delicacy. It is an aromatic and spicy curry made from moth beans. A lot of exotic spices, onions, garlic, ginger, and chilies are used in the curry. The masaledaar preparation is garnished with cooked potatoes, chiwda, sev, chopped onions, coriander, green chilies, and a dash of lemon. In families of Maharashtra, Misal Pav is a regular breakfast or evening snack.

Misal comprises two elements – Ussal, which is a thick, spicy mixture, while Rassa is the watery gravy. There are several local versions on the preparation of Misal. Some are spicy, some low on the chilly scale, and some relatively plainer than their loaded counterparts. Kalya Masalyachi Misal, Shev-misal, and Dahi Misal are a few of the various preparations of this dish. Misal Pav is an integral component of the menu of almost every local restaurant, big or small. Traditionally it should be spicy enough to sweat your brows off! With a smooth butter-toasted pav, the spice is wonderfully balanced.

Keri Aamti or Kairichi Aamti is one of the most popular Maharashtrian cuisines to battle the scorching summer heat. It is a Raw Mango Curry with scrumptious gravy, stewed raw mango, tempered with mustard seeds, and dry red chili. It tastes close to perfection as a meal with bhakri or steamed rice. Kairichi amti is the most delicious seasonal cuisine in west Maharashtra in the Konkan region. Raw mangoes are one of India’s favorites. It may be utilized in different foods to make a nice and delectable feast. This fantastic and easy recipe will become one of your favorites once you try it. The freshly grated coconut provides kairichi amti its rich texture and flavor. Every bit of this curry is reminiscent of the summer when you stole mangoes from your neighbor’s backyard and transports you to childhood. Kairichi amti is like your personal sunshine in a bowl during the summer!

Local cuisine is a cornerstone of the cultural legacy of Maharashtra. The people of the state consider their food to be ‘Anna he poornabrahma’ which translates to food is equal to God. Their meals rely on Ayurvedic principles. Your daily meal should be perfectly balanced. Traditional Maharashtrian cuisine will have all nutrients that are needed for the well-being of your body. This list tries to capture all the greatness of the cuisine, so make sure to save it for future use.

15 Best Dishes of India You Can’t Afford to Miss!

Amazing Food Hacks to Save Money on a Trip