Namaskarah! To all readers confused by this style of greeting, it shall all become clear very soon, for today our destination remains the quaint little village of Mattur, situated in the Shimoga District of Karnataka which is the very ideal for the preservation of culture. This is a village where people only communicate using the ancient language of Sanskrit.

Sanskrit is rightly considered to be the mother of all languages. Most languages used in our country today find their origins in this eloquent and poetic language. It was Sir William Jones who put it best, “The Sanskrit Language, whatever be its antiquity, is of a wonderful structure; more perfect than the Greek, more copious than the Latin and more exquisitely refined than either.” Sanskrit is understood by everyone in Mattur, from the vegetable dealer to the priest. The majority of people are also conversant in the language. It’s not uncommon to witness a group of seniors singing Vedic hymns by the riverbank as a couple of young guys speed by on their motorcycles, flashing their cellphones while conversing in the ancient language. Even small toddlers bickering and playing cricket can communicate eloquently.

Coming across the fascinating village that is Mattur, you might be quite naturally, astonished. After all, in today’s era, you hardly meet anyone who speaks Sanskrit let alone an entire village. However hard it may be to believe, this town is indeed India’s only Sanskrit-speaking village. But there is still one imperative question: How did this come to be?

A child takes into his hand a little ball of snow which he then rolls around. That little ball goes on to form a snowman. Something that can be considered trivial ends up making a larger impact. That is referred to as the snowball effect. A small event such as a ten-day workshop and the words of a man are what led to Mattur being the town that it is today. This was back in 1983 when an organization called the ‘Sanskrita Bharti’ hosted a workshop to teach Sanskrit to the people of the town. This would have been it, had it not been for a man by the name of Pejawar Mutt from Udupi who on witnessing the town’s active participation and concern for the preservation of our heritage commented, “A place where individuals speak Sanskrit, where whole houses talk in Sanskrit! What next? A Sanskrit village!” Little did he know that his words would actually come true for this was a statement the people of this village took to heart.

The village of Mattur is an extraordinary symbolization of the way of living in Ancient India. The place might just have you questioning whether you reached there via flight or a time machine. When we’re sitting here moving away from our culture, they’re chanting the Vedas. Possessing the knowledge of ancient scriptures and Sanskrit has actually helped the students here to increase their aptitude and mathematical skills so much so that it is said that every family has a software engineer here in Mattur. The village also has one of the best academic records in the district. Mattur has produced more than 30 Sanskrit professors who are currently teaching in institutions in Kuvempu, Bengaluru, Mysore, and Mangalore. Mathoor Krishnamurthy of Bharatiya Vidya Bhavan, Bangalore, violinist Venkataram, and gamaka exponent H.R. Keshavamurthy are just a few of the famous people that call Mattur home. That is the power of Sanskrit!

Mattur is a rural community whose main crops are are nuts and rice. It is home to the Sankethis, an old Brahmin group that moved from Kerala some 600 years ago and settled in Mattur. Apart from Sanskrit, they also speak a dialect known as Sankethi, which is a blend of Sanskrit, Tamil, Kannada, and Telugu. One often asked question is why? Why do the people here choose to revive the language of Sanskrit, why do they still follow old traditions and norms? The answer to that question is fairly simple. It’s not a refusal to move ahead with the times but it’s embracing and honoring your past and despite popular belief, one does not stand in the way of the other. 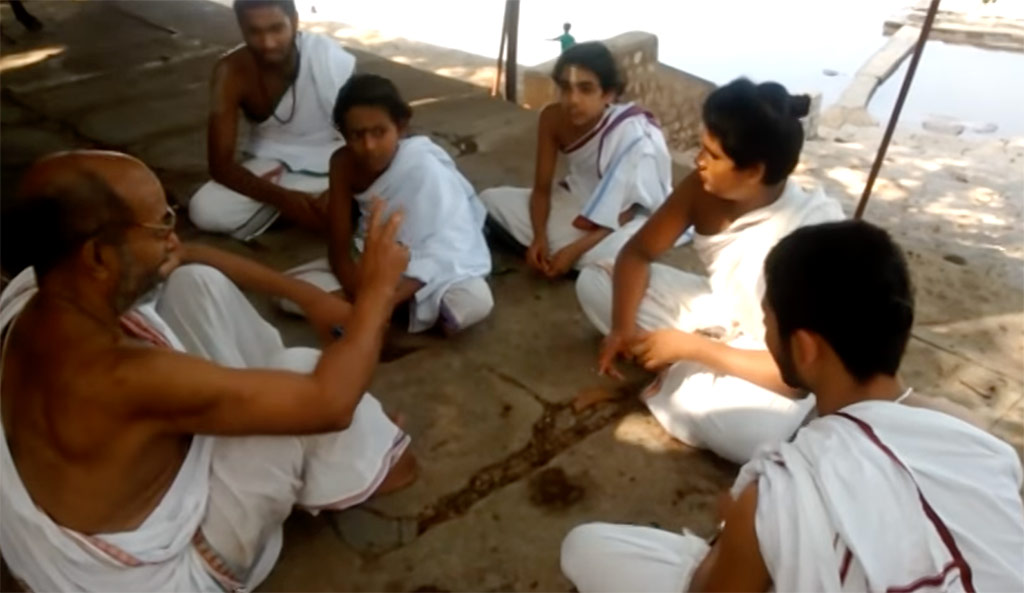 When you visit this wonderful town, walking down the street you will see signs in Sanskrit. Outside various homes, people proudly display that, “You can speak in Sanskrit here.” This clearly shows the delight derived from their heritage in this rare utopia. As a kid, learning Sanskrit was something you had to do for the sake of marks and when given an option we opted for French or German instead. That’s what makes this village all the more intriguing: the willingness of the people. Even children at the mere age of 10 years old learn about the Vedas as a part of their curriculum and keep the essence of our past alive.

With over 5000 residents who converse fluently in Sanskrit, the town of Mattur is truly an inspiration. The feat they have achieved should be an example for all of us that preservation of our roots is something that is up to us entirely. All that is needed is effort and a little push which is something you might get from the story of the people of Mattur. Traditions are a bridge from our past to our present and respect for your culture does not make you outdated for it serves as the very foundation of your identity and who you are.