The vastness of the Mysore city is also reflected in its food. Mysore settles a massive variety of dishes that are delicious to eat and equally enchanting to look at. Ranging from the most famous of all that is idli, masala dosa, uttapam, vada, the list continues and reaches the most luscious Mysore Pak. Leaving you with a watering mouth, this complete list of Mysore’s famous food would make you a fan by, sampling and would also tempt you to try out these exquisite South Indian dishes.

Mysore offers a variety of dishes: some greatly influenced by the Udipi style, and others which originated in the city itself. South Indian cuisine is the most conventional among the people.

Here is a list of Mysore’s famous food, all of which serve as culinary delights:

Idlis are steamed rice cakes that are served with a spicy lentil soup and coconut chutney. They are suitable for breakfast meals and are a favorite food among the local people of Mysore. Some restaurants sell fried Idlis, which is not a traditional practice but still serves as a delicious experience. Others make Idlis with semolina or jackfruit. Idlis are served in food stalls, mobile food carts, and restaurants.

The deep-fried crust of the Vada produces a crispy cover around the mixed stuffing of black gram flour, cumin, curry leaves, onion, and chili. It is served with a spicy lentil soup and coconut chutney. The combination of one Idli and one Vada is a common preference for breakfast or snack-time.

The ball-shaped Bonda is a type of pakoda or dumpling usually eaten during breakfast or lunch. The people of Mysore love a popular variation of Bonda which is the Aloo Bonda, made from mashed potato. Like most local delicacies, Bonda is served hot with lentil soup and coconut chutney. A hot cup of tea is an excellent accompaniment during breakfast.

Khara Bath is also known as Upma and Uppittu. It is a conventional South Indian breakfast item that is made up of semolina, roasted with vegetables and spices. For a final delicious touch, one may top it with cashew nuts. Khara Bath offers a light, savory meal comprising only a few spices; yet it is fulfilling for the appetite. It can also be consumed with coconut chutney.

Kesari Bath is a sweet delicacy conventionally eaten for breakfast. It is known by other names like Sheera or Sooji Halwa in Northern India. In Mysore, it is commonly offered as ‘prasad’ at temples during festivals. Also, it is a customary practice in most restaurants to serve a pineapple-flavored version of Kesari Bath on Sundays.

Masala Dosa’s preparation varies from one region to another. The Mysore Masala Dosa specializes in its signature red chutney that is smeared on the inside of the cover. The crispy dosa is then stuffed with a preparation of mashed potatoes and onions, called Aloo Bhaji. Served hot alongside coconut chutney, the dosa is abundant for lunch.

Uttapam is a thick and piquant rice pancake generally cooked with vegetables. A must-try variation of dosa, it tastes best when consumed immediately after it is prepared. The most popular versions of it are topped with onions and tomatoes.

Poori varies in different regions as it is served all across India. In Mysore, it is known as Poori Saagu. The dough is deep-fried in oil until it becomes puffy and soft. It is consumed with a delectable preparation of vegetable curry.

Shavige Bath is made from thin and light vermicelli. Chopped vegetables and nuts are added along with curry leaves, mustard seeds, and turmeric for a delightful flavor. The dish is light on the stomach, like Upma or Kesari Bath, and served with coconut chutney.

Bisibelabath is a popular lunch item of Karnataka. The name means “hot lentil rice” in the Kannada language. One can savor this dish to the fullest when eaten with chutney, boondi, salad, or even potato chips.

The historical delicacy of Mysore Paaka was invented in the Mysore Palace during the reign of Krishna Raja Wadiyar IV. The brilliant royal chef, Kakasura Madappa, was the first to make this incredible sweet dish. Mysore Paak contains plentiful amounts of gram flour, sugar, ghee, and cardamom. The dessert is a significant cultural cuisine of Mysore. It is offered in most restaurants and sold in sweet shops by the kilo.

Payasam is a creamy, sweet dish made with milk and rice or vermicelli. It is topped with nuts and raisins and poses as a lovely dessert for any occasion, be it a delicious diversion after lunch or a wedding ceremony.

Kori Gassi is a meat dish that originally belonged to the Bunt community of the Mangalore region. Today, however, this immaculate preparation is a favorite all across Karnataka among the non-vegetarian people. Also known as Mangalorean Chicken Curry, it consists of soft and juicy pieces of chicken cooked with finely ground fresh coconut and spices. It matches best with rice or Neer Dosa.

Hanumanthu Biriyani is one of the oldest and most authentic biryani you can get in Mysore. The place is legendary and getting a taste of the popular Mutton Biriyani is almost a herculean task! The biryani rice is filled with aroma and the perfectly cooked pieces of mutton, with a slight bite with the organ meat and fat of the mutton, intensify the meaty flavours in this biryani. 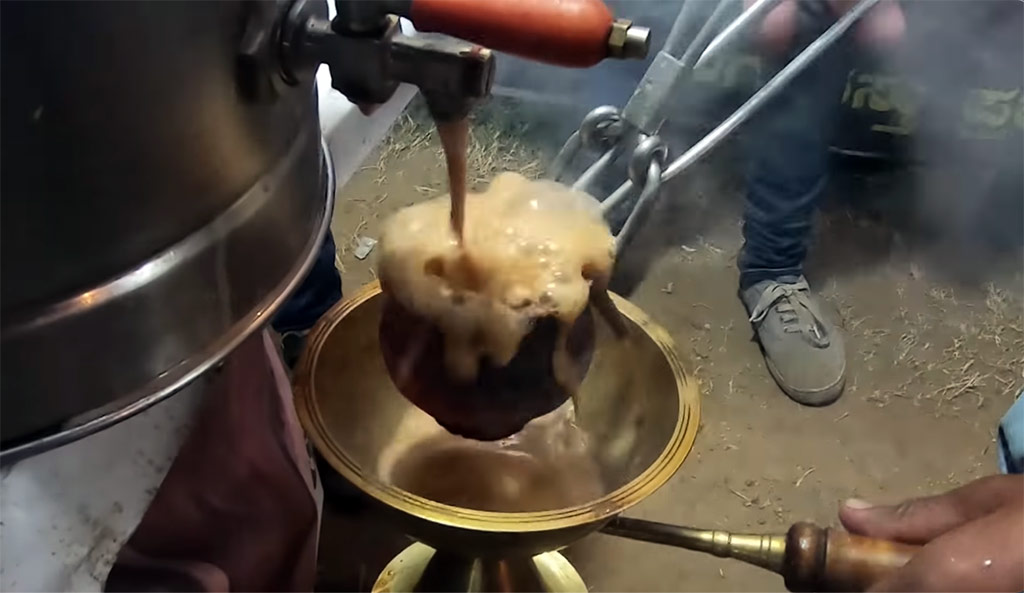 Tandoori Tea is made by taking iron tongs and an earthen cup which is placed in a glowing hot tandoor (or just a large metal drum).

When the cup is fuming, it’s taken out and sweet milky chai is poured in (the same is done with coffee), which sizzles and froths over. Then this chai is poured into a different kulhad and served. The process gives it smoky, earthy tones, with some caramelisation from the sugar. It’s delightful and makes for an entertaining show.

Like every State in India, Karnataka has its very own favourite evening snack, the Churumuri. This appetising mix of puffed rice, grated carrots and other seasonings has since seen many variations but the base remains the same — puri or puffed rice.

While Bhel-puri and Masala Pori have a few wet ingredients like tamarind syrup or boiled peanuts, Churumuri is a completely dry mixture. It’s a refreshing, crunchy salad with finely grated carrots, a little spice mixture, a handful of Congress kadlekai (spiced-shelled peanuts), chopped onions, tomatoes topped with a dash of lime and coriander. All this is cosily stuffed in a conical paper cup.

The places mentioned above are only a few of the numerous ones that serve delicious food in Mysore. There is an abundance of options for a new visitor to try out from.