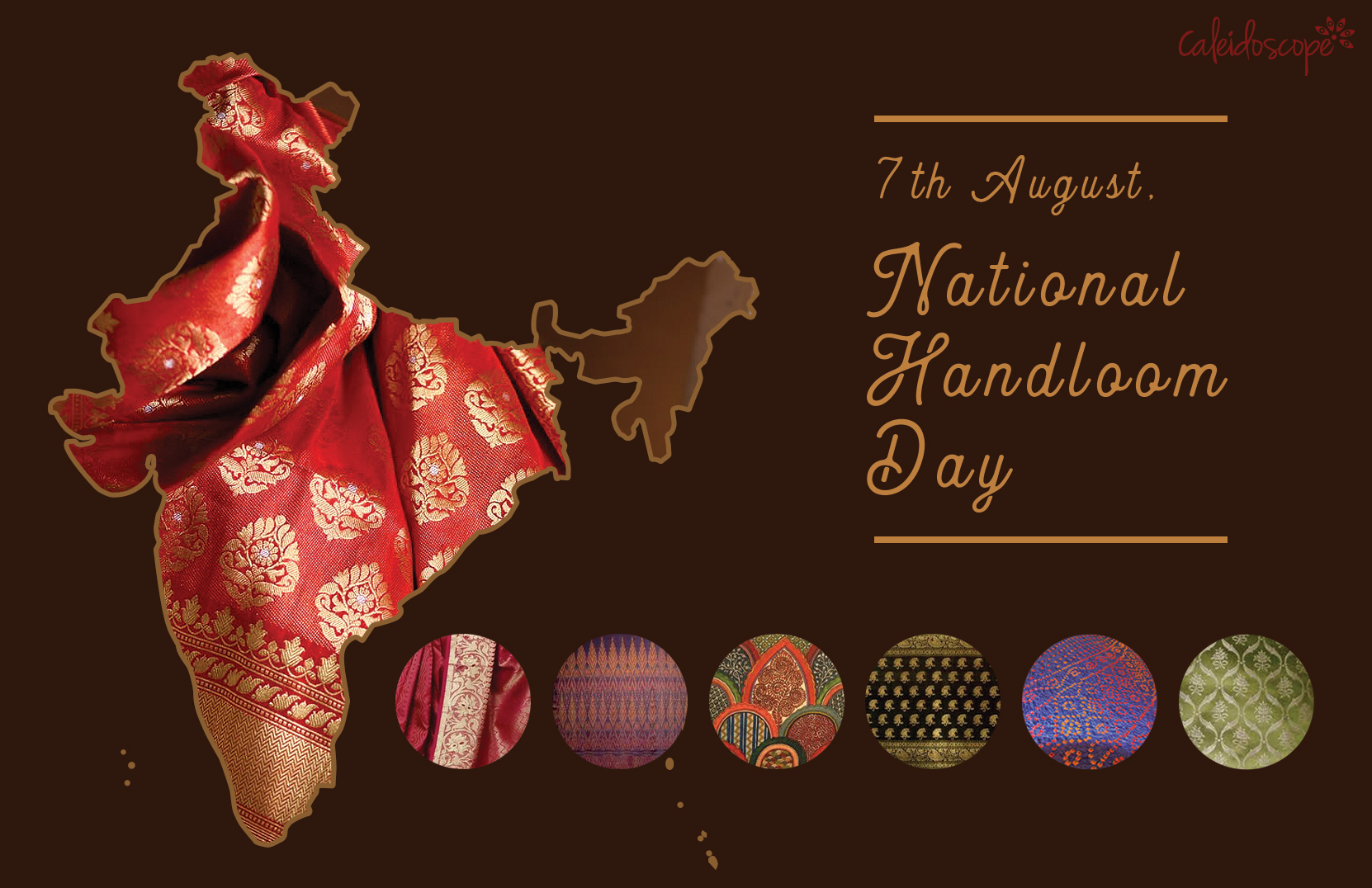 The National Handloom Day was celebrated a few days back on 7th August. I am sure when each one of us think of handlooms, we conjure up some image, event or memory with it. For instances, whenever I think of handlooms, I immediately remember the roadside stall named as the Handloom Emporium stacked with colorful and unique items. The open stall unlike any high end fashion or utility store always captured my imagination and till date if I pass through the road, I either stop by or quickly glance through to check out the products. Similarly, one can also associate handloom markets during exhibitions where stalls are lined with bags, mats, décor items, curtains, mattresses, cushion covers and so on.

Why is the National Handloom Day celebrated?

7th August holds a special significance. It was in 1905 on 7th August that the Swadeshi Movement acquired momentum. With the Bengal partition, a formal proclamation came about at the Calcutta Town Hall that boycotted all foreign made goods. The idea was to concentrate and encourage local products. The government in 2015 introduced the National Handloom Day to stimulate and acknowledge weavers and local artisans. This year marked the 6th celebration which was carried out through online mediums.

But before we move further, let’s dwell a bit on understanding the handlooms better.

What does handloom mean?

A handloom essentially means any other loom besides the powerloom. However, in 2012 this definition was expanded to also incorporate the hybrid loom where at least one weaving process requires manual or human intervention.

There are basically three different kinds of looms that weavers use manually. They are the pit looms, stand loom and frame loom. Yarn is the ‘thread’ that is used to make the cloth or fabric. The dyeing of the yarn is an important activity before actual weaving or looming. The texture of the hand woven fabric varies from that of a mill or machine made fabric.

Difference between Handloom Fabric and Khadi

Now that we know the technical definition of what handlooms mean let’s move a step further. Let’s take a look at the different handlooms of India across the different states. There are of course, many more, but highlighting some below. 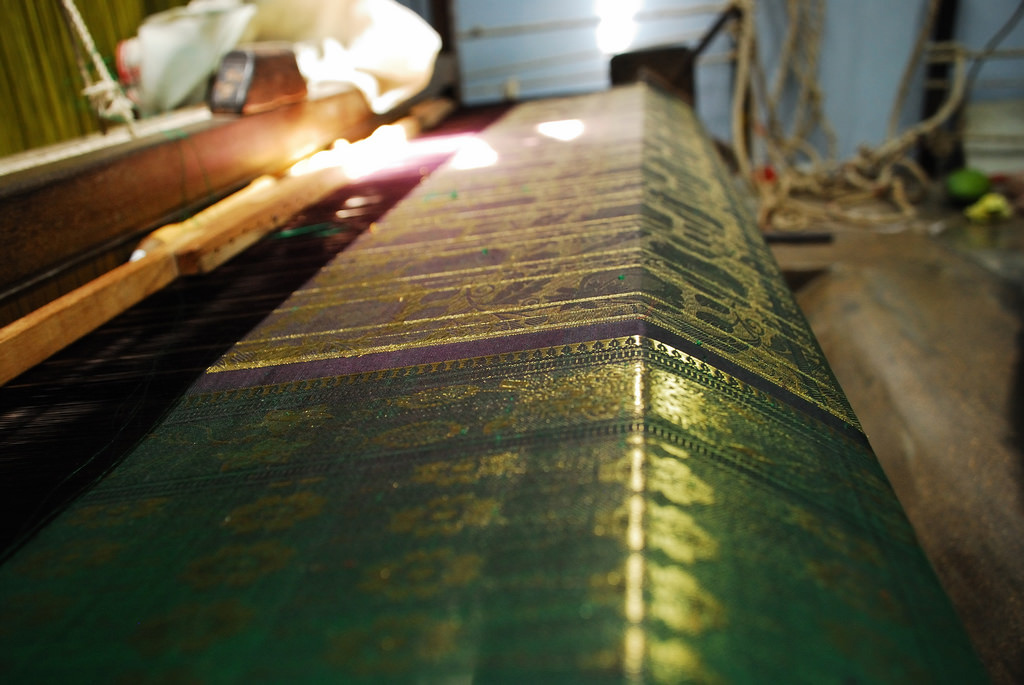 Originating in Kanchipuram in Tamil Nadu the Kanjeevaram sarees are one of the most popular handloom products. The sarees can sometimes take up to 6 months to be made and are usually worn on special occasions, such as weddings.

Though the Ikat art is woven across the country, it is most concentrated in Odisha. It is usually the members of the Bhulia and Meher community who for generations have mastered this weaving art. The culture of the land is often depicted in the patterns and designs. 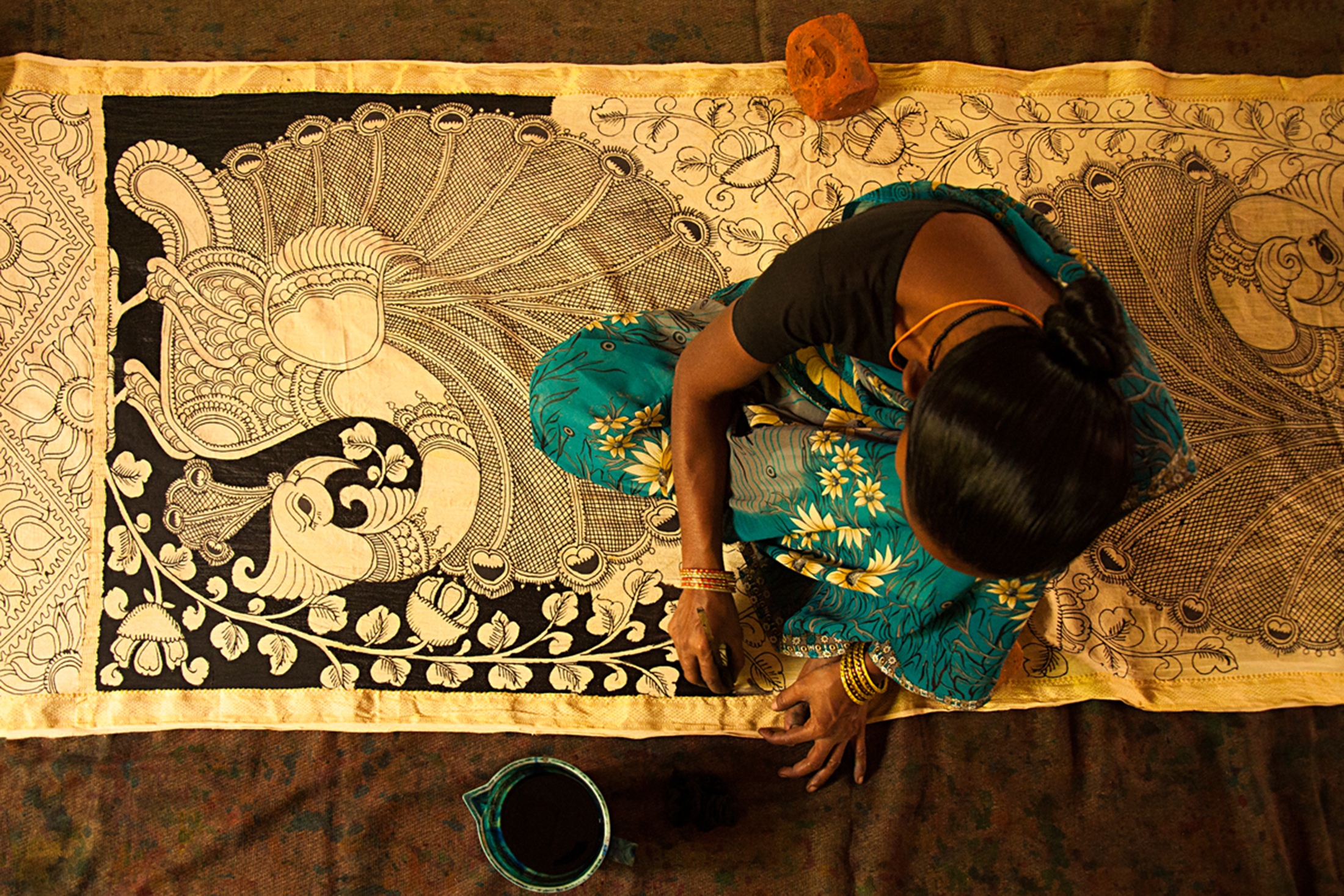 One of the oldest weaving arts, the Kalamkari fabrics flourished the most during the Mughal era. Today the fabric is well known for its block and hand painted designs. 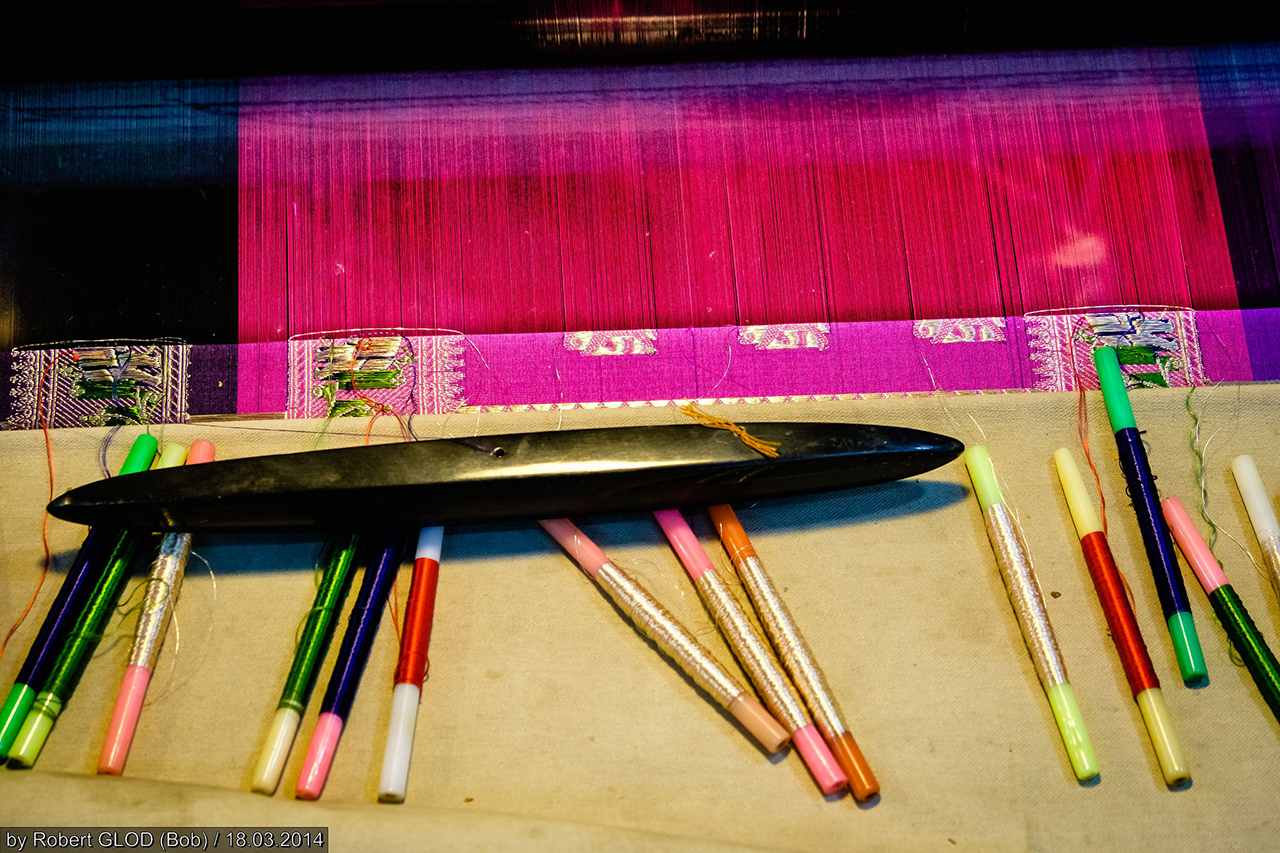 Banarasi sarees are very popular products woven by the handloom weavers in Varanasi. The weavers weave silver and gold into the fabric creating a piece of magical proportions. The banarasi saree still remains one of the most sought after wardrobe treasures. 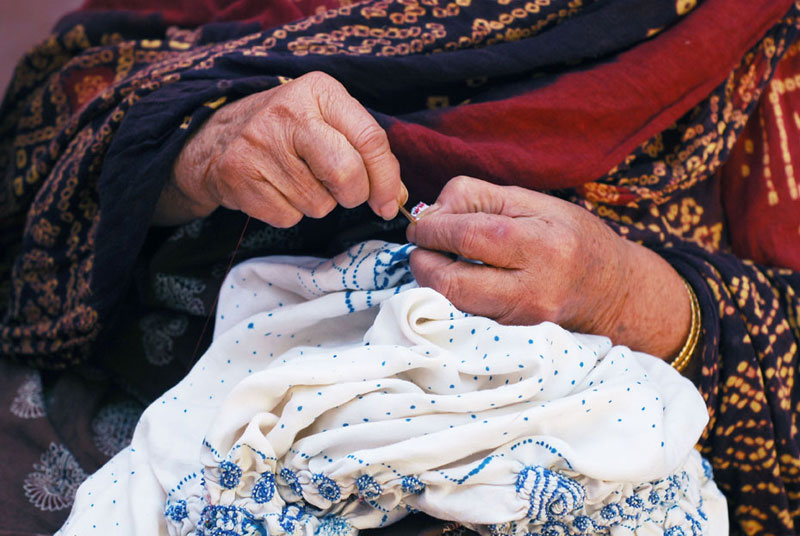 Bandhani uses the method of ‘tie and dye’ and is practiced in both Rajasthan and Gujarat. With circular and square motifs the bandhani fabrics exude bright colors. The patan patola, on the other hand, is made from silk. Originating in the town of Patan in Gujarat the weavers work for months before the final product is creating. This method also involves both dying and weaving techniques. 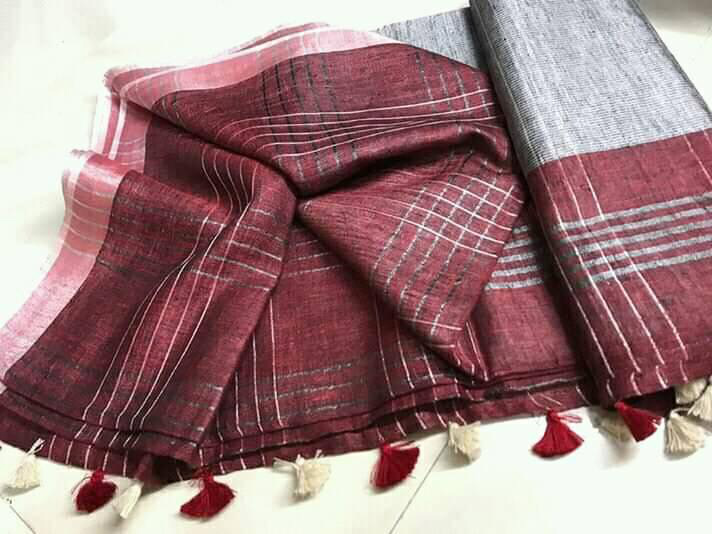 Bhagalpur is known for producing one of the finest silk of the country. The fabric is made from the tussar cocoons and is most famous in the form of Bhagalpuri sarees.

Some facts About Indian Handlooms

The All India Handloom Board (AIHB)

The All India Handloom Board was set up in 1992. It included government officials, as well as representatives of the handloom industry including weavers and experts. The government in a move that has both riled and surprised handicraft experts abolished the AIHB and the All India Handicrafts Board only a few days before the National Handloom Day. According to the government this move was in line with its vision of ‘Minimum Government and Maximum Governance’. The boards however, were the direct link between the weavers and artisans on ground.

This year the Union Minister of Textiles, Smriti Irani tweeted the #vocal4handmade hashtag and encouraged to ‘bring home handmade in India.’ The idea is to roll out the concept of Atmanirbharta or being self-reliance and pitching for products Made in India. A lot of celebrities and citizens posted their pictures and various information or anecdotes encouraging the weavers and artists of the handloom industry.

Where on one hand, the handloom products are sold very locally, on the other the fabrics are also used by popular designers. We have a huge handloom export market and some of the top designers of the country also incorporate and encourage the handloom wears. Popular Bollywood stars, such as Rekha, Vidya Balan and Deepika Padukone are often seen carrying off handloom garments with ease and style.

And hence, the fate of the handloom industry oscillates between the two ends. The number of local weavers has seen a decline with the new generation opting for other professions due to the decreasing returns in the occupation of their forefathers. Villagers account for how where once almost every other household had a loom, but today only a few homes remain that still practice the art of weaving. Due to the stiff competition from machine made products at much cheaper rates, the handloom industry has witnessed a gradual fall. The condition of the weavers which were once hailed and respected during the times of royalty and kings is relegated to cheap labor. The increased cost of raw materials, lack in credit facilities and poor infrastructure has also impacted the handloom industry.

Yes, there are various schemes, in fact more than 10 by the government for the weavers. Yet, there is very little change that it has managed to bring about on the ground. Thankfully there are also many NGO’s that are taking it upon themselves to promote the handloom industry. Also technology and the online marketplaces dedicated sometimes exclusively to handlooms and handicrafts have also been a big plus to the industry. The handloom industry has its own niche market and people are increasingly more aware of the skill and hard work that goes into making a handmade product. Connoisseurs of art and people associated with the textile or fashion industry are making efforts to revive and market the handloom products. And the consumer is also acknowledging the uniqueness of these products. However, there is the need to further uplift and empower these skilled artisans.

The Handloom Industry during COVID

The present times have not been easy for many. The weavers are no different as the handloom industry has been hit badly and the desperation of the weavers has only been heightened by the COVID pandemic. With businesses falling and market places shut down the local artisans are grappling to sell their products. Also, usually rural exhibitions and bazaars were held from January to June every year helping the local handloom goods find a viable marketplace. Due to the current pandemic and social distancing norms, this door has shut too.

What can you do to encourage the handloom industry? How can we as ordinary people play a role in sustaining our weavers and artisans?

For those who can afford, buying authentic handloom products will not only sustain the local weavers, but also help in preserving and encouraging the art itself. Sharing and spreading the word, buying local made products and opting for handloom arts, if not always, at least often can also push the industry forward. There are handloom brands, such as Fab India, Ethicus, Upasana, Angadi Gallery and more. There are also various online shopping platforms, such as Weavesmart, Gaatha, itokri and more. In the end, our weavers and local artisans will only feel empowered when consumers show them the love, financial support and respect that they deserve.