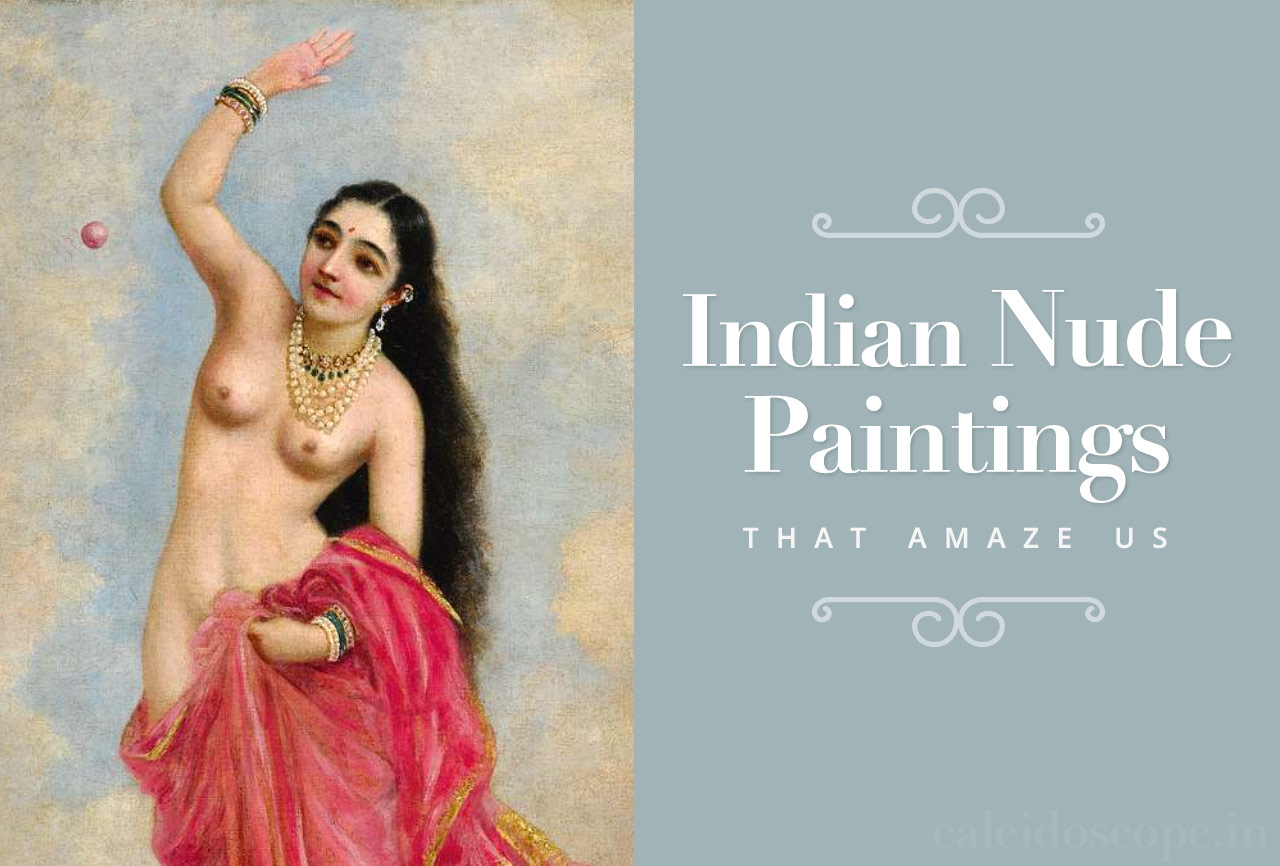 Reading the pages of history through scriptures and caves is a crucial part of learning through the ages. One such domain which is not only quintessential but also controversial in the subject of Indian culture is nude Indian painting. When referring to this kind of art, the first impression comes with its subject, the portrayal of females. Sigiriya Damsels, a massive 5th century mural in Sri Lanka, have 500 naked ladies adorned on the Lion Rock. The murals of Ajanta tell the Jataka stories, the oldest 2nd century BC age Indian art. Here, there lies handsome princes and princesses with love-lorn displaying heavy breasts and feminine beauty. If you look closely at the old Indian sculptures, you will find there is a certain kind of an obsession of Indians with the sensual body parts. It is momentous to note that nude art is not always about eroticism, but rather about creating a sense of fertility and abundance through females. To complement the idea, you must know that centuries ago, 1200 BC, in the reign of the Mauryan empire, women and men didn’t wear anything but just a fabric to cover the essentials, close to nothing. It is not surprising that India has a rich nude art history, from which many Indian artists have drawn inspiration. This article highlights some of the famous ones whose art is irresistible.

Here we list the top nude Indian painting and the artists who painted them.

After Raja Ravi Varma, Dhurandhar is the second most popular Indian artist of the first half of the nineteenth century. His work comprised mainly of landscapes, portraits, and mythological and historical India. The painting Female (Nude) is realist nude Indian painting by the artist with a princely eye for details. In Mumbai’s J J School of Art, he mastered classical Western training while incorporating traditional Indian craftsmanship and iconography.

This naked female art by Dhurandhar portrays a lady from the rear against a thick blue background. Her fleshy skin and minimal muscles are some of the features that make her appealing, while she embraces herself with a necklace. The white pearl earrings and flowers on her hair are an addition to her beauty. Her expressions hint to us about her going crimson while closing her eyes. This painting perfectly manipulates the artist’s mastery of lighting, shade, and body language.

Among the epic artists, Majumdar is known for the wet-saree effect he produces with his paintings. He learnt art with the European books he got from England. Majumdar produced a series of artworks with the woman as the subject. He used to paint sensuous layers of smooth skin with little muscles and bone structures to portray feminine beauty.

This nude Indian painting has a female with long black hair covering her torso with a free cloth. Moreover, her body skin shows a smooth texture with a whitish tone. Her facial expressions and head-down explain the dilemma of the woman’s life. In the background, there lies a statue which is also naked. The painting holds a spectacular vision of the domestic side of a woman’s life through the rich colours and vivid scenery.

3. Self-Portrait As A Tahitian By Amrita Sher-Gil

In remembering one of the finest Indian female artists, one can’t neglect the name of Amrita Sher-Gil, who was a Hungarian-Indian artist. She is the Avante-grande woman artist of the 20th century, referred to as Frida Khalo of the east. By analyzing her 172 oil paintings, it becomes clear that she captured the inside peaks of women’s lives that nobody knew about. She was an exceptional colourist with special effects through colours. Surprisingly, until her late 20s, she did not use red colour in any of her paintings. She took inspiration from the murals of Ajanta and Ellora caves and drew classic compositions.  She has painted a number of nude Indian painting that continue to amaze us. Learn more about her style of art, earlier life and late life from here.

The composition you see does not intend to showcase the female body as a component of desire but as a reflection of reality. Sher-Gil portrayed a man’s reflection on the naked lady with misery on her face. The reason behind this is the message of patriarchial society and the female body as a depiction of a mere sexual object. In addition, various Japanese figures used in the background of the naked female art suggest her experimentation with a new art style.

Suggested read – Renowned Women Artists of India You Should Know About!

Raja Ravi Varma was the first Indian artist to display Westernism in his paintings, yet his values and subjects were deeply rooted in Indian traditions. He was born in Kerala and grew up with his siblings in his mother’s ancestral home, where he observed the women working and performing their daily rituals. In his paintings, he used to display subtle flesh skin with careful attention to facial expressions. He used to embrace feminine beauty with ornamentation and glittering clothing.

In this composition of Tilottama, there lies a Hindu mythological story of an Apsara, Tilottama. As a result of Brahma’s request for the destruction of two demons, Sunda and Upasunda, she was created in the epic Mahabharata. As their atrocities grew, Lord Indra sent her to them. They were captivated due to her irresistible beauty. As a result, they fought and ended up killing each other. The nude Indian painting displays a naturalistic woman with a bare chest and hand gestures above her head. Her long hair, use of red saree and glittering jewel gives another reason for her prolonged charm in the composition by the artist.

Born in Goa in 1924, he was the most influential modern Indian painter and mentor of M.F. Husain. He studied at St. Xavier’s school, where he was dismissed due to his drawing of pornographic images on the school’s lavatories. He further enrolled in J. J. School of Art in Bombay, where he was expelled again due to his participation in the Quit India movement with Gandhiji. He experimented with many art styles, but his most famous was the black paintings, produced in London during the 1950s to 60s.

In this composition, he portrayed a nude lady who adores her beauty with a comb in one hand and a mirror in the other. The evocative sensuality in this artwork through the unusual private parts of the lady is notable here. The artist filled colours in the lady with black reflections.

There is rarely anyone in India who does not know about M.F. Husain. He was one of the most crucial modernist Indian artists who remained controversial due to his naked depiction of Hindu Gods and Goddesses. On asking about his naked art, he often said that nakedness in it links itself to formlessness, innocence and maturity. He drew nude portrayals of Saraswati, Sita, and Ram and as the hurtful sentiments to the people of India; he even went to exile.

In this composition, he drew Bharat Mata as a red nude female with various other elements in the background. The artwork led him to around 900 odd cases and massive protests against him. It portrays a weeping woman due to colonization by the Britishers. The careful use of lines and symmetry alongside brighter colours are the noted points in the controversial Indian nude painting.

Born in 1929, Badri Narayan was an Indian artist, author, and storyteller. He worked as a successful art teacher before he took paintings as a full-time role. Additionally, the core of his composition remains in Indian literature. He inserts popular Indian icons into his oeuvre at times, and symbolism dominates his work. A constant theme in his artwork was self-reflection and autobiographical perspective.

An abstract still-life composition is juxtaposed with the figure of a seated female nude in this painting by Badri Narayan. Almost as if the woman herself is part of the still-life composition. It has a certain mystic dream-like quality, which is typical of the artist’s painting compositions. In Narayan’s artworks, there is a hidden message conveyed through certain symbolic elements.

Suggested read – Top Indian Artists That Every Indian Should Know

There is no doubt that nude depictions have always been a part of Indian history. They not only showcased the purity of artistry but were bound to explore the traditions of old India, which we now overlook. What do you think of these artworks, and which nude Indian painting is your favourite? Let us know in the comments below.