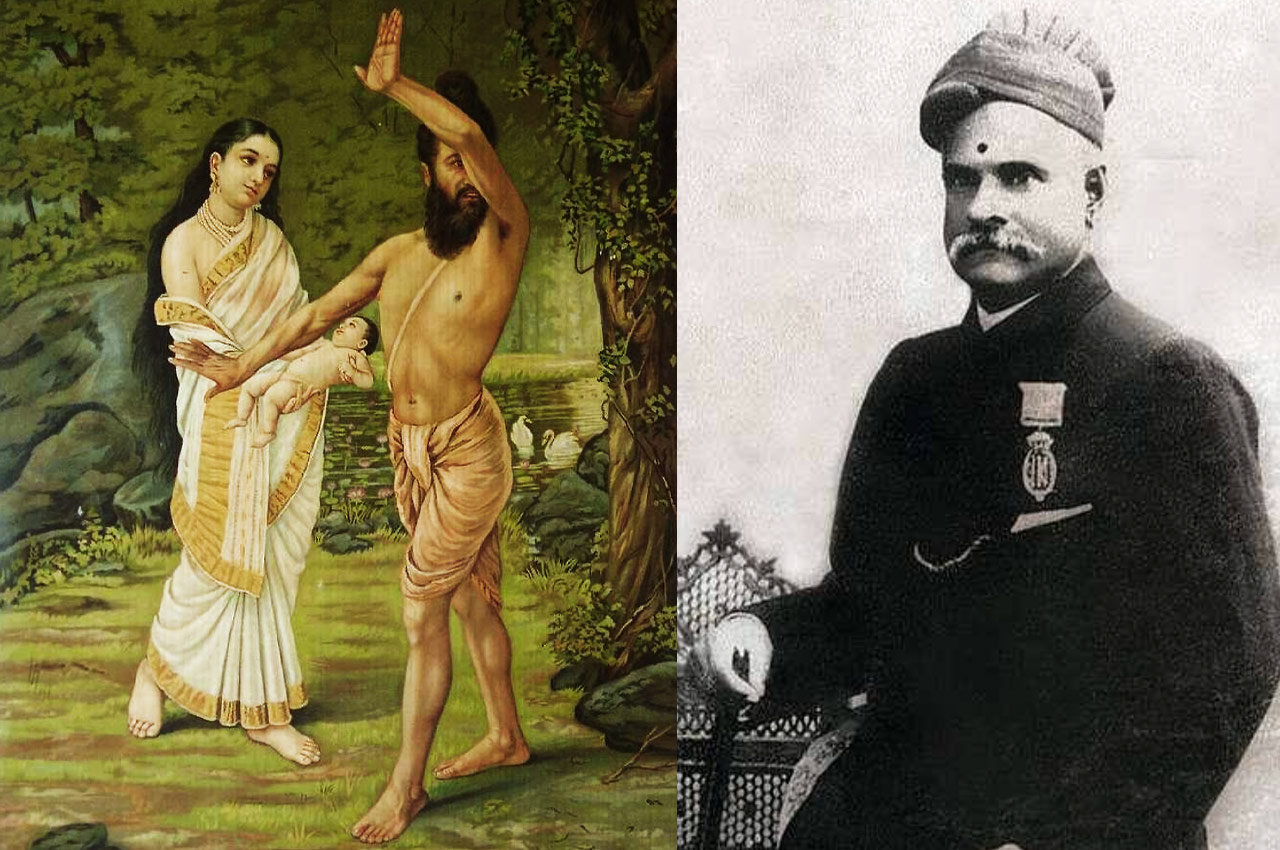 Raja Ravi Varma (1848-1906), born as M. R. Ry. Ravi Varma, is one of the greatest artists and painters of the 19th century. Popularly referred to as the Father of Modern Indian Art, he was considerably adored for his realistic portrayal of Indian Gods and Goddesses. While he devoted his life painting for the royalty, he is also incredibly credited for taking art to the masses and inspiring them with his prints and oleographs.

Raja Ravi Varma was born in April 1848 in Kilimanoor, Kerala, to a family close to the royals of Travancore (mostly through his wife Bhageerthi). In his formative years, he drew animals and everyday scenes on walls in indigenous colors made from natural materials such as leaves, flowers and soil. When his uncle Raja Raja Varma noticed his dedication, he encouraged him to pursue his talent further. Under the patronage of Ayilyam Thirunal, the then ruler of Travancore, he began learning watercolor painting from the royal painter Ramaswamy Naidu. Later, he trained in oil painting from a Dutch artist named Theodore Jensen.

Painter of the Royalty

Varma became a much sought after painter for the aristocrats and was commissioned several portraits in the late 19th century. Arguably, at one point, he became so popular that the Kilimanoor Palace in Kerala opened a post office to receive the sheer number of painting requests that would come in for him. Later, he traveled across the country extensively, especially for work and educating and inspiring others.

Following a portrait of Maharaja Sayajirao of Baroda, he received commission work of 14 Puranic paintings for the Durbar Hall of the new Lakshmi Vilas Palace in Baroda. Depicting Indian culture, Varma borrowed from episodes of Mahabharata and Ramayana for the same. Figuratively he divided his paintings into three logical categories of ‘Puranic’, ‘Religious’ and ‘Scenes from Hindu Classical Drama’. He was also at the receiving end of patronage from numerous other rulers, including Maharaja of Mysore and Maharaja of Udaipur. This commission work would have been officially incomplete had it not been the support and undeniable assistance of his sister Mangalabai Thampuratty, and his brother C Raja Raja Varma. Besides the celebration of his work, Raja Ravi Verma’s sibling camaraderie is something one could look upto.

As his popularity soared, the artist won an award for the exhibition of his paintings at Vienna in 1873. He was also awarded three gold medals at the World’s Columbian Exposition in Chicago in 1893.

Artist of the Masses

Raja Ravi Varma aspired to take his art to the masses and this intent led him to open a Fine Art Lithographic Press in Bombay in 1894. The first picture printed at Varma’s press was reportedly ‘The Birth of Shakuntala’ (also bears the spelling ‘Sakoontala’), followed by numerous mythological figures and saints such as Adi Shankaracharya. In 1901, Ravi Varma sold the printing press to a German lithographer, Fritz Schleicher, who continued to manufacture the lithographs.

In September of 1894, the chromolithographs of goddesses Lakshmi and Saraswati were launched. Back in the time when religion, its methods and places of workship was restricted to a certain class of society, the Lakshmi and Saraswati chromolithograhs were revolutionary in their own way. It was only in the 1930s, much later after Varma’s death in 1906, when the process of opening of temples to the masses commenced, substantially instituted by the Temple Entry Proclamation of Travancore in 1936.

“The Lakshmi and Saraswati chromolithographs breached every religious injunction and restriction by making their way into every Hindu home thereby democratically offering Hindus across all classes and castes access to uniform religious imagery.” (source: Google Art and Culture)

In actual fact, the lithographs have been recreated from popular paintings done by Raja Ravi Varma. That being said, the lithographs themselves need not have been painted by the man himself. The Ravi Varma Press which was run jointly by the Varma brothers and Fritz Schleicher, employed a school of trained artists from Europe who learnt to paint in the style of Ravi Varma and continued to create lithographs similar to his style, even after his death.

Varma maintained the ‘Indian-ness’ and authenticity of his paintings whilst deriving inspiration from Indian epic poems and mythology. Amongst his innumerable works were Skakuntala, Hamsa Damayanti, There Comes Papa, Lady In Moonlight, Woman Holding A Fruit, Yashoda Krishna, Galaxy Of Musicians, Vishvamitra, Tilottama, Reclining Nayar Lady, Stolen Interview, The Maharani Of Travancore, Maharani Lakshmi Bayi, and Nair Lady Adorning Her Hair, amongst others.

It is no secret that Raja Ravi Varma’s paintings are sacred in their own ways. Over 130 years after its creation, the painting titled Draupadi Vastraharan went under the hammer for the first time on April 6, 2022. It was sold for a massive Rs 21.16 crore in an auction. The historic painting exhibits the infamous disrobing of Draupadi by Dushasan surrounded by Pandavas and Kauravas in the palace of Mahabharata.

The popularity of the prints, in fact, continued till modern times, with Varma’s style used as inspiration for the illustrations in the popular comic book series named Amar Chitra Katha. Later, the well-known pioneer of Indian cinema, Dadasaheb Phalke (1870-1944) was one of the artists working at the Ravi Varma Fine Arts Lithographic Press before departing for Germany to study the latest printing techniques and cinematography. He was in awe of Varma’s work which made him transport these themes into cinema in order to inspire the nationalistic sentiments to seek a free and independent nation. These prints depicted sacred, religious and social themes that found resonance with Indians to arrive at a common religious and nationalistic identity desperate and desired under alien rule.

Most recently, a weaved weaved illustration of Raja Ravi Varma’s ‘Galaxy of Musicians’ on a saree was sold for INR 40 Lakh! It was woven by Indian Weaves based out of Chennai. The Vivaah Pattu saree is silk sari made up of navratna stones like diamond, emerald, ruby, yellow sapphire, sapphire, topaz, pearl, cat’s eye and coral. It also has embroidery in metals such as gold, platinum and silver.

In the present day, several foundations continue to celebrate his legacy. The Ganesh Shivaswamy Foundation established in the year 2019 celebrated 125 years of the print legacy of the inimitable Ravi Varma Printing Press. The Raja Ravi Varma Heritage Foundation established in 2015 sustains Varma’s artistic legacy by engaging with relevant stakeholders and the public. The latter also held a Phygital NFT auction in August of 2022 to sell 10 of the best chromist made lithographs from the Ravi Varma Press, each filled with natural intuition and positive emotional energy. These included Madalasa and Rutudhwaja, Vasantika, Hamsa Damayanti Samvad and Madri. A documentary by the same can be found on Youtube titled ‘Wanderers Between Worlds’ created under the tutelage of the foundation, which unveils the artist’s life.

Not to miss, a significant contribution comes from the acknowledgement of Varma’s works by scholars and collectors. For instance, the ‘Gods in Print: Masterpieces of Indian Mythological Art’ incorporates a number of lithographs which cannot be found elsewhere. Herein, a forward has been penned by the reputed Prof. Vasudha Narayanan and an Introduction by Richard H. Davis.

Not to miss, Erwin Neumayer and Christine Schelberger’s jointly authored book titled ‘Raja Ravi Varma: Portrait of an Artist, Diary of C Raja Raja Varma’ is one of the most extensively documented books that offers deep insight into the life of Raja Ravi Varma and that of his brother. The life excerpts were derived from a journal kept by Raja Ravi Varma’s brother, serving as an authentic source material on the last ten years of the life of the artist. While Erwin Neumayer has authored many books on Indian art, his wife Christine taught art in a school in Vienna. The book also features many of his paintings including ;The Feast of Roses, L’inamorata’. The Foundation members use it extensively as reference material in their research.

To know more about them, you can visit their Instagram page: