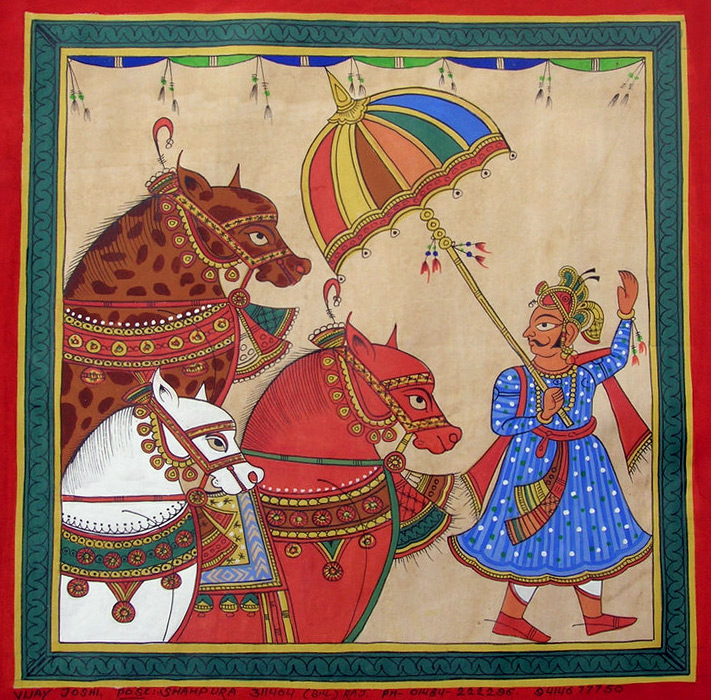 India has a beautiful talent for narrating and telling stories through various art forms like singing, dancing, sculpting, and even painting. These folk art forms have been a part of our culture and tradition for centuries. Each one of them is very different from the other. Every art form has its origin, history, and uniqueness. India has a rich cultural heritage and a lot of efforts have been put in by the people of this country to keep our culture alive and paintings are a very important part of it.

These traditional and tribal folk painting art styles are being practiced in India for a very long time. They have been passed on from generation and generation. These are a way to express ourselves and our feelings and narrate stories. Through these paintings, we admire and appreciate our nature, our surroundings. In addition, we also give respect to our gods and goddesses and our traditions and cultures. One such Indian folk style of painting is Phad paintings. Let’s take a look to know more about Phad paintings.

What are Phad Paintings?

Phad painting or Phad art form is an Indian folk painting art form practiced mainly in the state of Rajasthan in India. This art style is a religious scroll painting style. It got its name from the long piece of cloth or scroll it is painted on. We call this long piece of scroll a Phad. This art form is over 700 years old. It was originated by the Joshi family in Shahpura, near Bhilwara district in Rajasthan. These paintings have been passed on for generations in their family. They are the traditional artists of this art form. These Phads most popularly portray and depict the tales of local gods or folk deities of Rajasthan, Pabuji (folk deity), and Devnarayan (folk deity; an incarnation of Vishnu).

The Phad style of painting is a mix of Rajput as well as Mughal style of painting. The lengths of the phads of Pabuji are around 15 feet and of the phads of Devnarayan are around 30 feet. These Phads were used as traveling and portable temples of the local and Hindu folk deities. They were carried along by the Bhopas, the priest-singers of the Rebari tribe in Rajasthan. They are traditionally kept rolled while in transit. The Bhopas carry them and perform in front of them in villages or towns and public places. They use it as a mobile temple and perform especially during times of illness and misfortune. The Bhopas would unfold the Phad paintings after sunset and narrate the stories of the epics and the deities throughout the night in the jagarans. The performance would come to an end only in the early morning.

Along with this, the male priest (Bhopa) sings and narrates stories illustrated in the Phads. His wife (Bhopi) holds an oil lamp putting light on the section of the Phad painting which is being described. She also accompanies by singing some parts of the Phad and dancing. They also use a two-string musical instrument in their performance known as a ‘ravanhatta’.

The Making and Technique of Phad Paintings

The Phad paintings are extremely intricate and detailed. These paintings are very complex and the artist drawing them needs to be incredibly skilled and experienced. Traditionally, these paintings are created on handwoven, rough cotton clothes which are first kept overnight soaked in water so that the threads of the canvas thicken. Then starch from rice or wheat flour is applied for it to harden and stiffen. It is then dried in the sun and rubbed with a moonstone. It smoothes the surface and polishes the canvas giving it a shine. The whole process and the making of these paintings take a few weeks or months. The entire procedure involves the use of completely natural fibers and natural and earthen colors or paints.

These are handmade and are extracted from stones, minerals, flowers, herbs, and plants, later, mixed with gum and water. Every available inch of the canvas is used by the artist. He manages to adjust several stories at once in the painting. These paintings consist of a lot of human figures and they always face each other and not the person who is seeing the painting. These narrative scrolls are painted mostly in red, yellow, orange, green, brown, blue, and black colors. Every color has its purpose. Yellow is used for the initial outline, ornaments, and clothing whereas orange is used for limbs and torso. Trees and vegetation are shown by the color green while brown shows the architectural structures. The red color shows thick borders, royal clothing, and flags. Black is at the end of outlines, and lastly, blue shows water and curtains. The canvas is prepared by men while the colors are prepared by women.

It is believed that as soon as the artist paints the main deity’s eyes, the painting comes alive and is ready to worship which is why the artist paints the eyes in the last. After this, the artist could not work on his painting anymore. Before the first stroke of a brush on the painting, a prayer is offered to a deity such as Saraswati, Pabuji, or Devnarayan and then, the first stroke was always done by a virgin girl of the family.

For a very long time, the art form remained inside the Joshi family, and techniques were taught to only those members who were permanent in the family. After some time, the art form was at a threat of being extinct and needed immediate revival which is why Shree Lal Joshi, a celebrated and renowned Phad artist, and Padma Shree recipient, as well as Shilpguru award winner, decided to open a school ‘Joshi Kala Kunj’ in 1960 where other people and artists could come and learn the Phad art form. It is now known as ‘Chitrashala’. His son, Kalyan Joshi portrayed other stories and characters from the epics Ramayana and Mahabharata, Hanuman Chalisa, Geet Govind, Panchatantra, Ramcharitmanas, Bhagavad Gita, Kumarasambhava, Prithviraj Chauhan, etc.

The Phad art form is now not only nationally but internationally recognized and well–known. Some popular Phad artworks include Devnarayan Ki Phad, Pabuji Ki Phad and there is also a series of 108 Phads on Ramcharitmanas. Some noted Phad artists include Shree Lal Joshi; he kept the art form alive and received many national as well as international awards like the Padma Shree and the Shilpguru award. Pradip Mukherjee is another eminent artist who managed to revive this art form to a great extent. Other known Phad artists are Shanti Lal Joshi, Shri Vijay Joshi, Shamsher Khan, Nand Kishor Joshi, and Prakash Joshi.