#Didyouknow that many miniature paintings from the genre of ‘Ragamala’ depict the anguish of separation in love? The School of Bundi from the broader Rajasthani School has produced many such paintings. A city in the Hadoti region belonging to the Hada Rajputs of Rajasthan state in northwest India, Bundi has a rich history and was the capital of the former princely state with the same name of Rajputana in India. Bundi is located in a narrow valley within the Aravalli Mountain range. It is famous for its lakes, natural vegetation, palaces, forts and its paintings; murals at Chitrashala in the Garh palace made during the reign of Umed Singh, and many other works on paper, now in different collections.

As mentioned, the Hadoti region belonged to the Hada Rajputs. The Chunar Ragamala was executed in 1591 A.D under the Hada Rajput, Bhoj Singh (r.1585-1607, son of Surjan Singh) and is a landmark in the history of Ragamala painting. The ruler who was under the Mughals was stationed at Chunar, near Varanasi and functioned from his palace there. The set was painted by three artists Shaykh Hasan, Shaykh Ali, and Shaykh Hatim, who were pupils of Mir Sayyid Ali and Khwaja Abddus Samad of the Mughal atelier; who had been gifted by Emperor Akbar. This set was iconic and influenced the later Ragamalas produced at Bundi.

The Genre of Ragamala Paintings 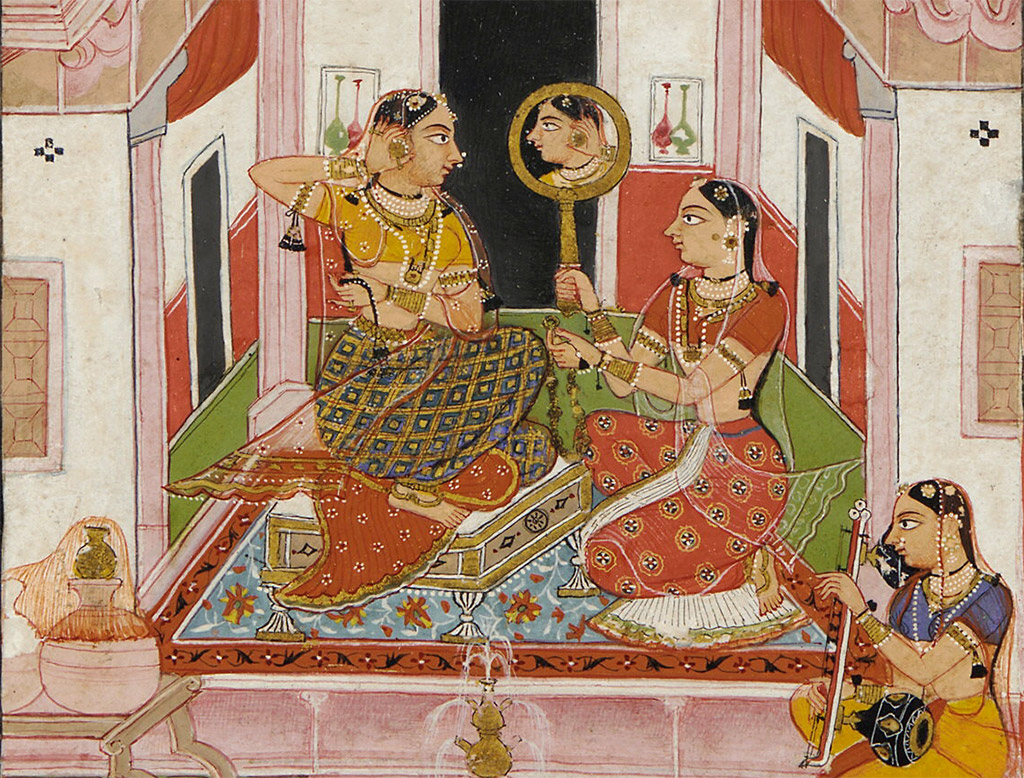 A ‘Ragamala’ means ‘garland of ragas’, which is a set of paintings in which each raga, an Indian musical mode, actually a melody, is represented by a scene relating to the raga. A raga has its own essence and has been defined as ’a permutation and combination of notes or frequencies illustrated by melodic movements which are capable of producing a pleasant sensation, mood or an emotion in the mind of the listener’. The Ragamalas are a symphony of art, poetry and classical music of India. These ragas depict bhavas or emotions and are meant to be sung at a particular time of the day and in a particular season. Ragamala paintings have an accompanying verse written on top describing the painting and mentioning the raga it represents. The Ragamalas depict various moods of love, worship of gods, the action on a battlefield and many other scenarios including ascetic life. There are six main ragas; Bhairava, Malkaus, Deepak, Hindol, Shri and Megha and each raga has accompanying female ‘raginis’ as well, also their numerous sons, ‘ragaputra’ and daughters ‘ragaputri’. The ragas are expressed pictorially in the Ragamalas.

Let us explore some Ragamalas to do with the theme of love and longing, from this princely state!

This Malasri ragini from the Chunar Ragamala of 1591 is at the Arthur M. Sackler Museum, U S A.  Malasri ragini is depicted by a woman who is waiting for her lover. She is seen plucking at a  flower from a string or petals as she waits in anticipation. We can see the petals falling as she plucks them. It is night time with stars and a crescent moon, the lamp is lit. Sometimes a companion is shown with her in depictions of Malasri.

Vilaval ragini depicts a noble-woman dressing up and wearing earrings. The heroine is dressing up to meet her beloved. Her attendant holds a mirror for her while another lady plays on an instrument. A fountain in the foreground. The sun is strong in the sky and a peacock is on the parapet. The composition of circa 1680 housed at Freer Gallery of Art, U S A, has an ornate foliate border in gold and other colours.

Gujari ragini depicts a lady seated  with a veena. A peacock is also in her company in this  painting from circa 1670 housed at the Cleveland Museum of Art, Ohio, U S A. The peacock is symbolic of the absent lover for whom she is waiting. There are two pots in the foreground which are again symbolic. It is a melody of the monsoon, depicting the sorrow of separation. A ragini of pathos and longing.

A lady is picking flowers to make garlands in preparation for the arrival of her lover, which is the  representation of Gunakari ragini. Garlands are symbolic of the tryst of love. A plantain tree is in the backdrop alongside a flowering one with birds and clouds in the sky. A peacock is in the foreground, maybe symbolising the absent beloved. The ragini is one of anticipation.  The work dated to circa 1660 is with the V& A Museum, London.

The Todi ragini is an image of a beautiful forlorn woman wandering in a grove, who has been separated from her lover. Her companions are the deer who listen to her mesmerising music as she plays the Todi ragini on her veena. She searches the forest for her beloved. The Todi ragini is an old tribal folk melody; turned later into a classical melody. This painting is with the Rijksmuseum, Amsterdam dated to circa 1779.