Exploring the Majestic Murals At The Big Temple in Thanjavur 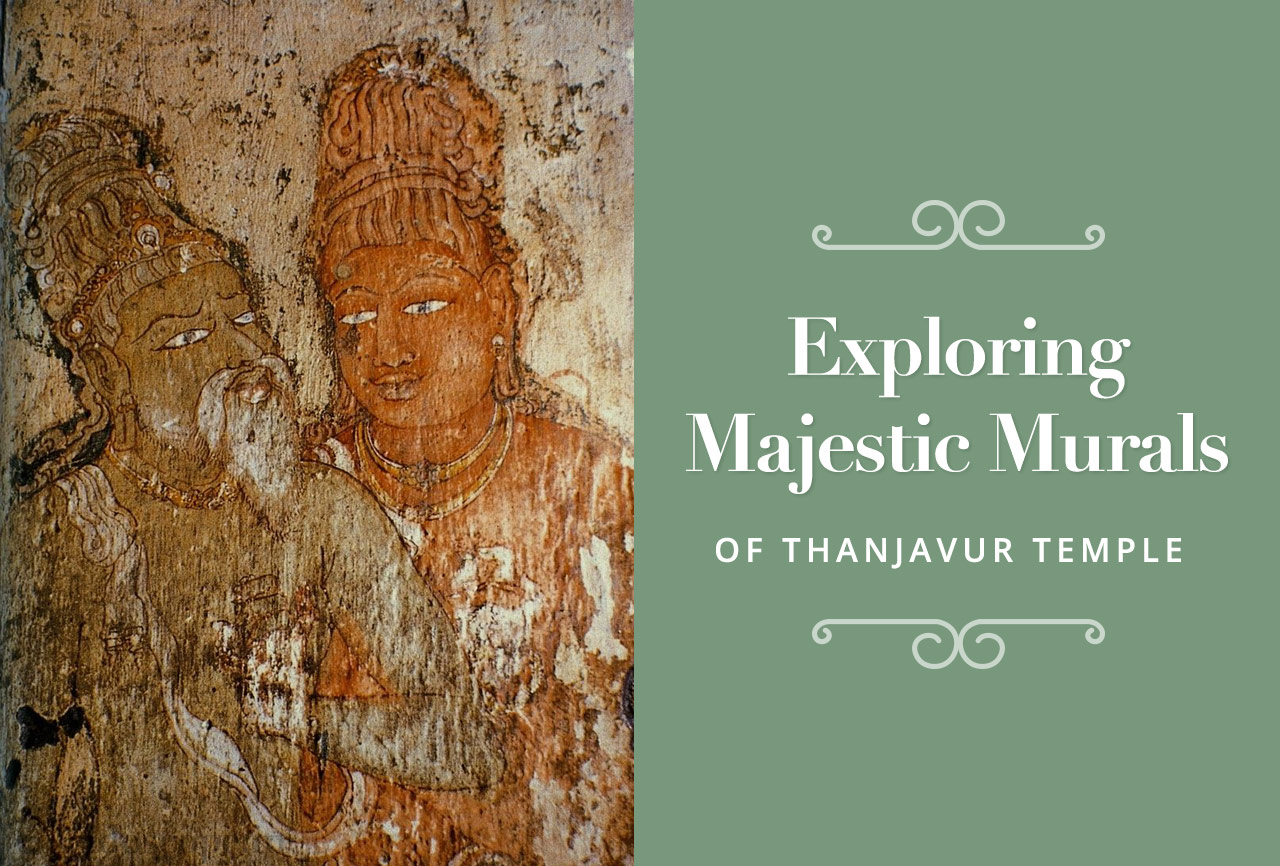 #Didyouknow that in Thanjavur, India, a temple called ‘Big Temple’, over thousand years old, rich in sculpture, an architectural granite marvel is home to majestic murals as well? We are talking about the Brihadeeshwara Temple in Thanjavur dedicated to Lord Shiva of the Hindu trinity. Built by Rajaraja Chola I of the Chola dynasty, the temple is also called Rajarajeshwaram and Periya Kovil. It is located on the bank of River Kaveri in south India. The temple was built during 1003 and 1010 A.D. The structures included gopura (gateway), the main temple, the vimana or tower, inscriptions, sculptures and murals. Additional structures were added over the centuries, and the temple has faced some damage in its history as well. The temple has the largest Shiva linga in India and is the first place to commission the brass Nataraja or Lord Shiva as the Lord of Dance. There are separate shrines for Nandi, Goddess Parvathi as Brihannayaki, Kartikeya or Subramanya and Ganesha. It is a UNESCO World Heritage site. The Cholas were great followers of Shaivism. There are inscriptions on the temple walls; music and dance were an intrinsic part of the temple’s programmes. Tamil hymns of the Nayanmar were recited by the pidarars (priests). A southern branch of the Marathas was established in 1674 when Ekoji Bhonsle, half-brother of Chhatrapati Shivaji I seized Thanjavur from the Nayakas.

Under Maratha rule in the 18th and 19th century, Thanjavur became the premier cultural centre in South India. Under Serfoji I the Big temple was renovated, his mural is in the 2nd mandapa of the Subramanya shrine, also the mural of Serfoji II. Starting with Shahji II (r. 1684-1712) they styled themselves as Cholanadus. The Marathas looked after the temple very well. Shahji wrote multilingual songs in praise of Shiva as Brihadeeshwara. Serfoji II contributed as well and renovations happened under him.  He built a dhwajastambha, a flag pole and a masonry podium for dance by the devadasis. The temple is an imposing structure and is the largest Hindu sanctuary in Tamil Nadu, 59.82m tall. The Nayakas were successors to the Cholas followed by the Marathas. The main temple contains the linga sanctuary, ‘linga’ being the anionic form of Lord Shiva. This is surrounded on four sides by a narrow internal passageway that opens into a vestibule with side doorways and a mandapa, a pavilion to the east. There is a Nandi pavilion and a towered gopura set within a big walled compound. The compound is lined with a peripheral colonnade and contains a number of subsidiary shrines.

Story of the murals

The murals at the temple complex have a history of their own. The temple has a circumambulatory pathway with many frescoes along the walls from the floor to the ceiling. They were discovered in 1931 and restored in the 2000s by the Archaeological Survey of India. The frescoes/murals relate to Hindu mythology, especially Lord Shiva, though there are paintings of Lord Vishnu, Goddess Durga, Goddess Kali and images of the Chola kings as well. The images of the murals have been bit damaged by burning of camphor and soot from the lamps in the temple over a period of time. Around 16 Nayak period frescoes were superimposed on the Chola murals and they were restored by ASI by de-stucco process and displayed separately. The Thanjavur temple is a repository of stone carvings and reliefs, wall and ceiling paintings and thickly encrusted plasterwork. There used to be metal statuettes of deities inside the temple but the metal images have now vanished. The Nayakas and Marathas added further artistic dimensions. The Bronze Nataraja in the minor shrine from Rajaraja’s time is still there and worshipped. The murals from this period and are very interesting from the artistic viewpoint but are inaccessible to most visitors since access is restricted to the passageway around the linga sanctuary where they are located. However, they are available at the ‘’Interpretation Centre’’ in the South colonnade of the walled compound.

Themes of the murals

The murals were made 4 metres above floor level depicting Hindu deities, royals, attendants, sages, musicians and dancers in different ambiences. They also reflect the courtly culture of the period. The Chola murals survive in an incomplete and deteriorated condition and were discovered by in 1931 as already mentioned. The murals were partly visible, being partially concealed beneath Nayaka compositions. There is some similarity of the murals to Chola bronzes as well. The murals in the main temple include Lord Dakshinamurthy with Bhairava, Lord Shiva as Tripurantaka, story of Sundara-murti Nayanar, a poet-saint, Rajaraja worshipping at Chidambaram with his three queens and images of ascetics. Murals are there on the western and northern walls of the passageway that runs around the linga sanctuary. There are paintings on the Nandi pavilion and minor shrines too. The Nandi pavilion is the first structure one sees on entering the temple compound. It was added during the Nayaka period, it could possibly be a replacement of a Chola period feature. The pavilion houses a huge seated Nandi. The pavilion has a painted ceiling showing winged angels and fantastic birds., The Nayaka panels include Tripurantaka, courtly personages and bearded ascetics. The Brihannayaki shrine houses the principal Goddess of the Thanjavur complex, built during the 13th-17th century during Pandya, Nayaka period. It faces the raised podium in the middle of the temple compound and the ceiling paintings are over the central aisle, of the Devi Mahatmya narratives. The Nataraja shrine was made during the Nayaka time and has the Chola metal icon. The Chandikeshwara shrine is six metres from the main temple consecrated to one of Shiva’s most faithful devotees. The Subrahmanya shrine was built by Sevakka Nayakas, expanded in later Nayaka times. Shivaji II had this later mandapa walled in and embellished with a gallery of royal portrait murals. The Ganapati and Karuvar Devar (Guru of Rajajraja) shrines are in the western part of the walled compound. The Ganapati shrine has a stunning painting of Subramanya. The inner face of the walls of the temple are lined with a continuous colonnade. A Nandi is placed in the middle of south colonnade. Paintings on the rear walls of the west and north colonnade date from the period of Shivaji II. There exists a plethora of divinities, rishis, devotees and attendants. The west colonnade starts with Goddesses Lakshmi, Saraswati, Kali then Ganapati riding a blue rat, mooshaka or his vehicle, also called vahana. Shiva-Parvati, Subrahmanya with peacock with Valli and Devasena, an elephant and a courtly couple. The west colonnade also has the marriage of Lord Shiva and Parvati with a standard in the middle, dancing Shiva flanked by Vyaghrapadha and Patanjali, two demons flying through the air. There is also Yashoda with infant Krishna, Lord Rama and Sita, a moustachioed figure probably Ugra Pandya spearing fish in a river and a battle scene between two armed figures, most probably Lord Rama and Ravana. The north colonnade has narratives from the Tamil Tiruvilaiyadal Puranam, a ‘purana’ of Madurai. The scenes include a Maratha couple worshipping Shiva and Parvati among others. Another group of paintings include a bull and a cow, Maratha warriors riding horses, courtly women paying homage to a male figure, woman worshipping Shiva on the mountain. Some faded scenes include worship of Shiva, musicians, also duck and bird headed figures venerating a linga, rishis (sages), Parvati and a linga and warriors riding horses.

Glimpses of the murals

The murals are hundreds of years old. However, one can still marvel at the murals at the Big Temple and feel their majestic grandeur. As we have understood, the murals include, murals from the Chola, Nayaka and the Maratha times. Let us see a few of them.

Rajaraja I and his guru – This mural shows the king Rajaraja I with his guru, Karuvar Devar. This is a Chola period mural.

Celestial dancers – A mural depicting celestial dancers is also from the Chola times. The dancers are well-coiffured and wearing pearl jewellery. Though faded over the years, the mural still fascinates with its vibrant colour scheme and is reminiscent of the Ajanta frescoes.

A ceiling fresco – The image shows a ceiling fresco at the Nandi pavilion with a lotus mandala in the centre, and four fantastic parrots in the corners around which is a vegetal scroll border. This was probably made under the Nayakas.

Goddess Kali – The fresco in the west colonnade depicts Goddess Kali with all her weapons and two attendants waiting over her with flywhisks.

Goddess Saraswati – The goddess of learning is seen with Tamburu and Narada, celestial musicians in the west colonnade. She is holding her majestic veena seated against a bolster and is flanked by the musicians.

Marriage of Shiva and Parvati – The divine marriage of Lord Shiva and Goddess Parvathi is depicted with a standard in the middle. Mural in the west colonnade.

Shiva-linga – An ekamukha shiva linga with an elephant paying obeisance.

Lord Ganesha – A mural shows the elephant headed God on his vehicle, mooshaka flanked by two attendants. His consorts Riddhi and Siddhi are seated by his side. mural in the west colonnade.

Gajalakshmi – A mural of Gajalakshmi in a posture of blessing, seated against of bolster, flanked by two elephants.

The Trinity– A mural depicting a multi armed Lord Shiva dancing the urdhva tandava.  He is depicted with the four-armed blue God, Lord Vishnu and four headed Lord Brahma.