There is tremendous diversity in food when it comes to India. The difference in the type of dishes and flavours is seen both at the macro and micro levels. Where there is massive diversity between North Indian and South Indian food, there are subtle differences within foods of each state in these regions too. However, despite the mélange of different types of Indian Cuisine, there are some mannerisms and etiquettes of eating, serving, and preparing food that remain almost unchanged across the entire country.

One such aspect is the presence of the thali. A thali means a largish, round plate that holds various dishes all assembled together.

What is a Thali?

This platter of different food items placed together finds its roots way back to the very beginning Indian culture. It is hard to say when the thali was introduced, but it is an integral part of many homes till date. In the literal sense, the thali is a metal plate that holds all the different flavours of Indian gastronomy, including sour, sweet, salty, bitter, and spicy dishes. But in many regions and states, the thali is served on banana leaves as well.

Small ‘katoris’ or bowls are placed within the thali, each containing a separate dish. A dollop of rice and/or a few chapatis are centrally placed surrounded by the katoris, some pickles, some fried items, and in many cases, papad. Although the items vary significantly from thalis across different regions, the layout of the platter hardly differs.

Importance of Thali in Indian Culture

We will talk about the different thalis of India, and there is no doubt that each one is tantalizing in taste and flavours, yet I find it more important to talk about the uniformity of food culture. The fascinating thing about Indian cuisine is that although it is so different, it somehow manages to keep most of its value system in place across the board. For one, thalis are a living example of this uniformity. Hence the thali is the first choice when it comes to food in most of the major events like weddings or small celebrations of the family.

However, there is a bit more to it than just being consistent. Food etiquettes mean a lot in most cultures of this nation. There is always a deep sense of respect and gratitude attached to meals, and that is manifested in the way food is served and consumed in India. A ‘grace’ or prayer, is not necessarily chanted at the start of every meal, yet the cultural connotations are markedly felt.

Why Thali System is the Best 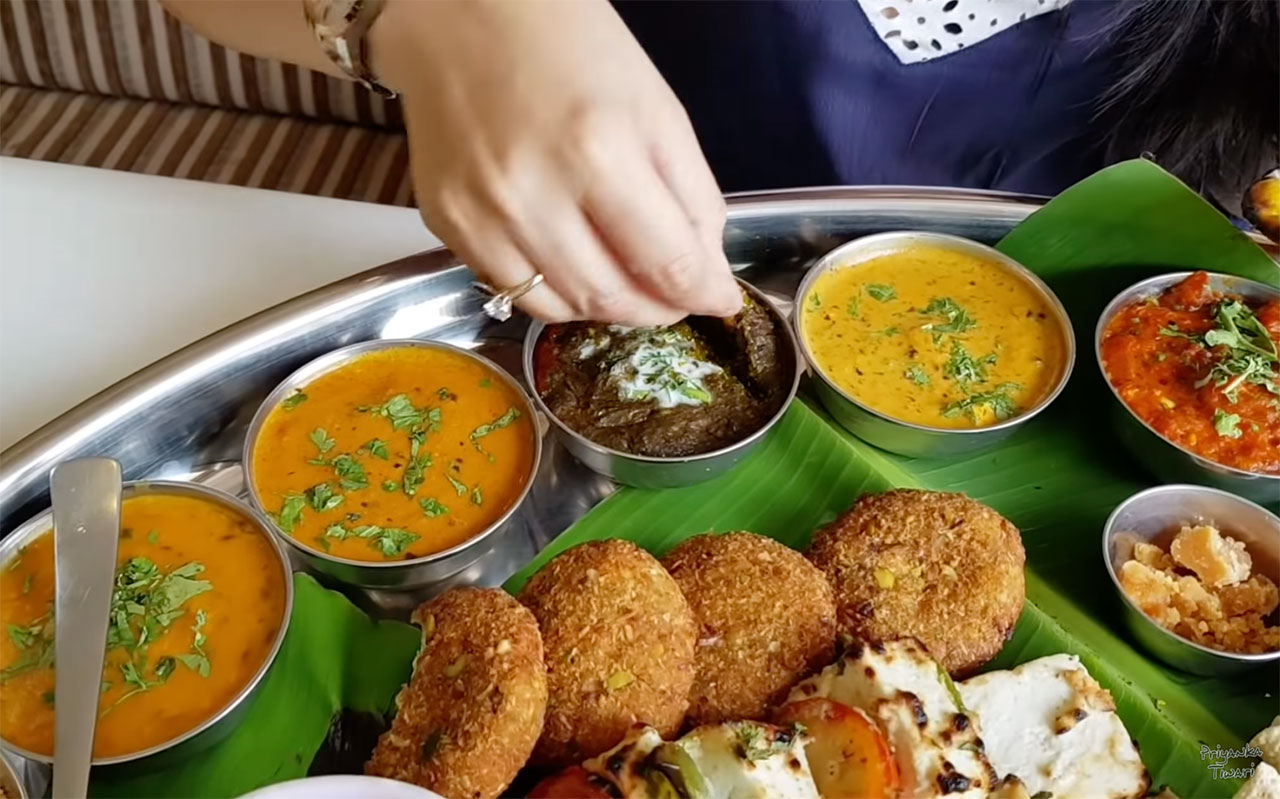 Here we’re taking a look at some of the food habits that are essentially rooted in culture and also as some sort of science. Although they are not followed rigorously today, due to the influence of dining on tables with spoons and forks, they are still practised in many communities today, especially in rural India.

Now, the thali incorporates most of these basic Indian dining etiquettes, making it a wholly Indian experience. Thalis are rarely ever eaten with a fork and spoon. Usually, they are unlimited in supply, especially at local joints, where someone is always ready to refill the contents. Though thalis are served in hotels nowadays, many are reverting to sitting on low tables, or on mats to create an ethnic feel and authentic way of eating.

Some Interesting Facts about the Indian Thali

Indian Thalis are as diverse as their culture, we can see a different thali in each state of India. Here we are listing some of the most famous thalis that are liked by Indians regardless of the place they belong to.

The North Indian Thalis can easily be classified as one of the spiciest thalis in the entire list. These thalis are common in the northernmost part of India including Punjab and its adjoining areas. Chole which is a chickpea curry forms a vital part of it, along with paneer ki sabzi, naan, rice, a mixed vegetable sabzi, sweet dish called halwa with pickle, salad and curd.

Hailing from the southern regions as the name suggests, these Thalis, in their most traditional forms, are served on a banana leaf. These thalis include chapati or puri, dry curry, sabzi, rice, sambhar, vada, payasam, rasam, buttermilk and importantly appalam.

Bengali thali carries items like the signature fish curry and rice. Sweet dishes such as roshogolla and Sandesh make up an important part of it. This thali can be served on any Bengali event like, Poila Boishakh (New Years),  Jamai Shasthi, Birthday etc.

Mughlai thalis are not that common in India and are mostly native to the parts of Lucknow from where this thali originates. Mughlai thali consists of food like Kebab, biryani, keema, korma, nihari, and much more.

Gujarati food adored by most people in the country for its subtle flavours. These thalis contain at least three fresh vegetable dishes, one dry dal or some sprouted pulses dish (ugaadayla mung, for instance), a wet dal, kadhi, kathor (a savoury), mithai, poori, rotis, steamed rice, chaash and papad.

A punjabi thali is said to be lively and dynamic, just like its people. The generous use of Makkhan (butter) is a must in every Punjabi meal. The most widely consumed Pujabi thali consists of Amritsari Kulcha or Naan, Pindhi Chhole, Dal Makhani, Jeera Rice, Paneer Makhani,Makke Di Roti, Sarso Da Sagh etc. A non-vegetarian version of it may include Butter Chicken, Amritsari Machchi and Naan. All punjabi thalis end with a big glass of Sweet Lassi.

The Rajasthani thali comprises an array of colourful dishes and some local hits that one would hate to miss out on. This intricate thali consists of Dal Baati Churma, Missi Roti with Gatte ki Sabji, Panchmela Dal, Laal Maas and Bajra Roti often combined with flavoured buttermilk. For desserts, Gondh ke Laddoo and Malpuas are great choices to treat your sweet tooth. Rajasthani thalis truly personify a royal dining experience.

Maharashtrians are known for their extremely spicy with different masalas and their thalis definitely showcase that. These thalis include the scrumptious staples of the state which includes Aamras, Koshimbir, Bhakri roti, Bharli Vangi, Amti, Pandhra Rassa, Mutton Kolhapuri, Sabudana Vada and desserts like kheer or Basundi. The thali will also have a little amount of rice in one corner with daal in a bowl, and chapati on the other corner. Pooran poli is another famous sweet dish that one will find in these thalis.

Goan food is synonymous with sea food and so a Goan thali would be incomplete without some fish preparations and other local favourites. This thali comes with rice, coconut, fish and Kojum. A few dishes include Goan rice bhakri, Goan daali thoy, kele ambat, vegetable vindaloo, Goan kokum curry, Sheet Kodi Nustea,  and Goan banana halwa to top it up. It is a complete Indian meal at your fingertips.

Served on a banana leaf, the Kerala Sadhya is the most popular on the occasion of Onam when the whole family gathers. It is very important in Malayalam culture and especially on festivals. Kerala Sandhya consists of servings like Manga curry, naranga curry, kalan, olan, upperi and other things.

Let me end by briskly gobbling over the fact that all these thalis are quite popular, not only in their respective regions but they also find eaters even outside of their geographical zones. Let’s hope that this legacy continues to flourish like this and prosper even more.