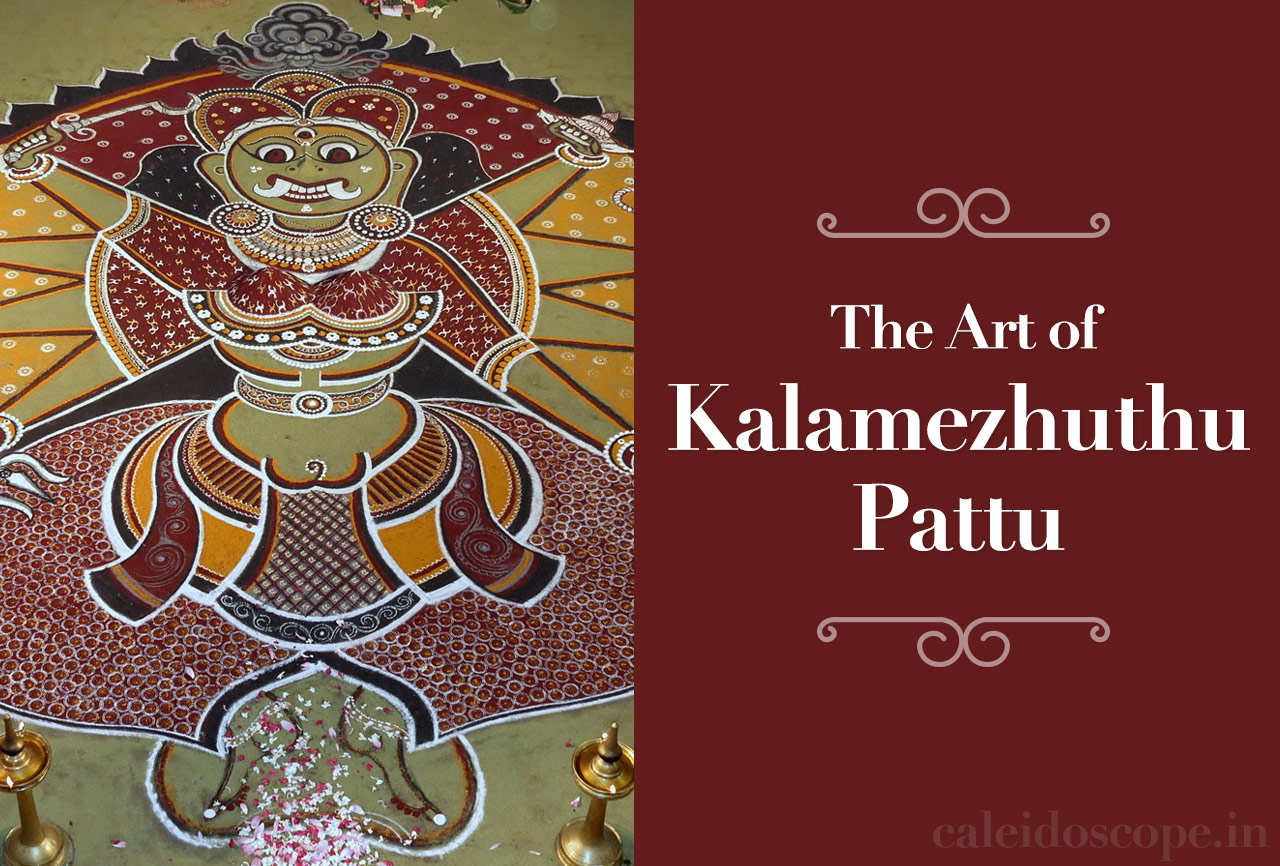 Floor art is largely prevalent in India. Different regions have their own methodology, rituals and purpose when it comes to practicing floor art. Call it Rangoli, Kolam or Alpona each of these floor creations are quite popular in their own geographic and cultural hubs. Similarly, a floor art that is unique to Kerala is the Kalamezhuthu Pattu.

Kalamezhuthu Pattu is known by various names, such as Kalam pattu, Dhulee Chitram and Kalamezhuthu paintings. It is derived from Malayalam words, ‘kalam’, meaning a picture and ‘ezhuthu’, which means to draw. This art form is completely related to temple and religious rituals. The Kalamezhuthu paintings are a part of the ceremony that worships the deities, Bhadrakali, Ayyappan, Vettakkorumakan, Bhagavati and Sarpa (Naga). The entire ritual involves not only drawing of the deities, but also singing songs dedicated to them, ritualistic dancing and finally the removal of the painting itself.

During the Kalamezhuthu ritual a number of Kalamezhuthu artists are involved. The artists belong to the Karups, Theeyadi Nambiars, Theyyampadi Nambiars and Theeyadi Unnis communities. There are slight variations in the kalam or picture drawn by each of the different communities, however, the ritual and practice is similar. Also, the community members’ participation is in the singing, dancing and setting up the stage or temple area, also called paattu mandapam where the prayer or ritual unfolds.

What is the Kalamezhuthu ritual?

The paattu mandapam or performance space is first prepared. This could be a separate stage set-up or within the temple premises itself. The space is decorated with garlands, flowers and oil lamps. Once the space is ready a long silk cloth runs right across the center. Next a puja is performed, also known as=‘uchapatti’ for the deity. The puja also consists of singing devotional songs. From now onwards, it is believed that the deity is present in the mandap. The Kurup then receives the koora or the silk cloth and places it on the ceiling of the stage. The Marar or the community of drummers play the drums, the Kurup sing the thottams along with the traditional instruments of kuzhi thailam (cymbal) and nanthuni (stringed instrument). The music and beating of drums continues till the end of the ritual. However, there might be slight variation in rituals that are dependent on the deity of worship.

The next step is when the kalam is drawn. It usually occurs during the evening or Sandhya vela, after rituals of deeparadhana, keli and thayambaka are completed. The artist uses only five colors and draws the entire image of the deity on the floor. The kalam begins with a single line drawn from east to west. The face and crown of the deity are drawn first, before filling in the details and adding the body. The image’s outline is done with white rice powder. Also, the picture is a 3D image using natural colors only. The five colors used are, white, black, green, red and yellow. White is prepared from rice powder, black from burnt husk, green from leaves, cassia, henna etc. Yellow is turmeric powder and red is a mix of lime water and turmeric. The colors are representative of the ‘pancha bhoota’ or five natural elements.

The kurupa artist takes anywhere between two to four hours to finish the entire image. He sprinkles the colors on the floor by hand, without using any tools. The size of the kalam is dependent on the deity, scale of the ritual and vastu shastra, though on an average, the picture is around 10 feet. The deity figures have clear expressions, such as they are in deep thought or anger. While the kalam is being made there are ongoing musical performances. The instruments that are used include kuzhal (wind instrument), chenda, ilathalam (cymbal like instrument), madhalam etc.

Once the kalam is completed the next step of the ritual follows. Kurup is the one who creates the deities’ pictures and sings too. However, once the figure is completed, the Komaram takes charges. The Komaram usually hails from the Nambudiri community and performs the important closing rituals. These include, kalapradikshinam, where he dances on rhythm of the traditional instruments around the deity’s picture or the kalam. The other ritual is nalikerameru, where coconuts are broken and offered to the deity. The final closing of the ceremony is called kalammakkal.

The Komaram is often regarded as the representative of God himself. Along with the kurup, other musicians and devotees he steps out to look upon them all. Finally, the Komaram steps inside and dances on the tunes of the instruments around the picture. The drums beat in accordance with the steps of the Komaram who takes several rounds around the image. This is followed by a ritual performed by the head priest or thantri.

Next is nalikeram peru where the Komaram starts breaking the coconuts at intervals. The crashing of the coconuts is in sync with the musical crescendo of the chenda or drums and creates an astounding spiritually mesmerizing ambiance. The number of coconuts varies between 3 to more than 12,000 depending on the scale of the ritual. As the coconuts are broken, the image of the deity is simultaneously erased until the entire picture is gone. The colors left behind are taken by devotees as a blessing or prasada.

Koora valikkal is the last rite, where the Komaram removes the silk cloth overhead and returns it. This marks the end of the Kalamezhuthu ritual.

The Kalamezhuthu ritual is common in many temples and also noble and elite households. The ritual is performed on various occasions. There is a 40 day festival that begins from the first of the month of Vrischikam in many Bhagavati temples in Kerala. Also, since it is dedicated to different Gods it is performed in their respective temples. For instance, Bhadrakali Kalamezhuthu is performed in Bhadrakali temples and the song that is played here is the Bhadrakali pattu which is centered on the killing of asura Darikan. The Nagakalam or Kalamezhuthu ritual for the serpent Gods is practiced mostly by the Valluvar community. The Thiyyas of Cheerbakavu from North Kerala perform the ritual at the Thalappoli festival and it lasts for three days. Thus, the rituals vary according to the community, region, deity etc.

Features and characteristics of Kalamezhuthu

Besides, Kalamezhuthu pattu has well defined rules that the artists have to follow. For example, the hair and ornaments of each deity have to adhere to standard specifications. Only for the deity Bhadrakali a few liberties in ornaments and attire are allowed. Similarly, the color green can be used for the body of Bhadrakali, Vettakkorumakan and Ayyappa. Kalam art is 3 dimensional, mostly for the enhancement of facial features. Also, weapons play an important role and are emphasized in the kalam.

Kalamezhuthu pattu is a distinct ritualistic practice carried out specifically in Kerala. Here art forms of music, dance and floor art come together in prayer and ritual to honor and pray to the Gods. A uniquely splendid ritual, it is slowly gaining more recognition in recent times.