Top 7 Cultural Festivals of India You Must Experience 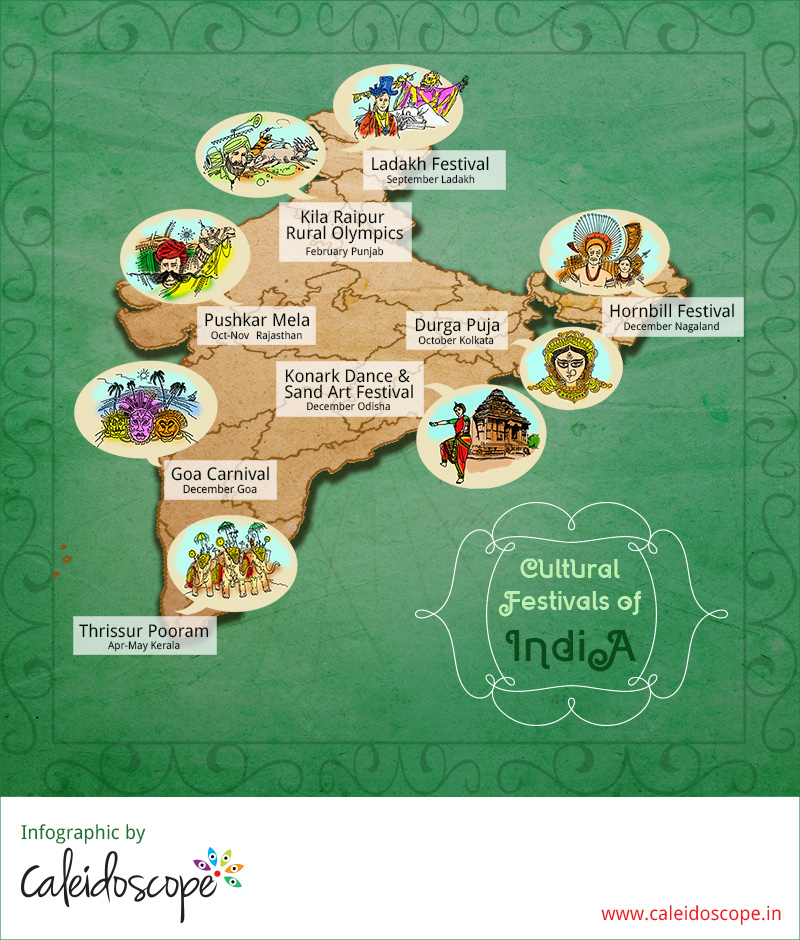 Mark Twain rightly said, “India is the cradle of the human race, the birthplace of human speech, the mother of history, the grandmother of legend, and the great grand mother of tradition. Our most valuable and most constructive materials in the history of man are treasured up in India only.” The months of October to December form the most culturally charged months of the Indian calendar.

A festival not only means joy and happiness, but it also means an essential display of tradition, values and culture. These festivities are entwined with the culture and lives of the people and have impacted them greatly. Every state in India has their own major festival and people become culturally alive during this time. Here are a few top cultural festivals of India that embody the diversity in the respective states –

The largest fair in the state of Rajasthan, the Pushkar Fair as the name suggests, is a camel and livestock fair held all across the town of Pushkar. The fair now attracts tourists from all over the country and the world. Apart from the regular transactions of livestock, several competitions are held such as ‘The longest moustache’, ‘The bridal competition’, ‘Breaking the pot (matka phod)’ and many others. The men are busy with the goats, camels, sheep and cows while the women pass their time in the stalls selling native jewelry, clothes and textiles. The fair is held during the months of October and November.

Undoubtedly, the most reverred festival of West Bengal, this event happens during the time of ‘Shukla paksha’ (Hindu calender), which stretches over several days that are named Maha Panchami, Maha Shasti, Maha Saptami, Maha Asthami, Maha Navami and Bijaya Dashami. Mahalaya Amavasya marks the inception of the festival and on that auspicious day, people give tributes to their deceased relatives. The festival ends with ‘Kojagori Lakhsmi Puja’, which is the worship of Goddess Lakshmi on a full moon night. The festival marks the triumph of good over evil. The festival falls mostly in the English month of October.

The Hornbill Festival is celebrated in the Northeastern state of Nagaland and is generally called the ‘Festival of Festivals’. This particular festival has huge cultural value as it displays a plethora of events under one single roof. The festival takes place in between the dates of 1st to 7th December in Kohima. Each and every tribe of the state take part in this beautiful festival of colors and traditions. Nagaland has a rich cultural and traditional heritage, which can be understood by this extravagant festival alone. The name is derived from the Indian Hornbill, a bird that is an essential character of the folk tales of the state. Several stalls are set up at the festival to display art and crafts, herbal medicine, games, beauty contests, rock bands, traditional archery, Naga dance and wrestling and many other such stalls.

This festival is held annually in Kerala and is held specifically at the Vadakkunnathan Temple situated at Thrisuur. On the occasion of Pooram which is the day when the moon rises with the Pooram star and is the largest of all Poorams. The festival has deep cultural and traditional implications with the people of the state and therefore it is all the more important. It was mainly started by Raja Rama Verma and the surrounding temples participated in the festival. The festival has events like Flag Hoisting (Kodiyettam), Firecrackers, display of ornamental caparisons, royal fans, peacock feathers and sacred bells. In spite of being a Hindu festival, the Thrissur Pooram has borrowed heavily from the local culture of Kerala.

This dance and sand art festival is related to the Sun Temple in Konark, Odisha and is organized to spread awareness about the magnificent UNESCO World Heritage monument. Organized the first time in 1989, the festival has tremendous cultural and traditional values. Situated 35 kilometers to the northeast of Puri, the Sun Temple has millions of visitors all the year round and is declared a world heritage site. The extravagant and exquisite architecture of gods, chariots, elephants and horses are a remarkable sight. The annual festival, held at the open air auditorium showcases different classical dance forms (Chau, Mohiniattam, Odissi, Kathak, Kuchipudi, Manipuri, and any other forms of tribal dance) sand art, at the backdrop of the temple.

Popularly also known as the ‘Rural Olympics’, this festival of sports take place in Punjab and covers a wide variety of sports. Kila Raipur is situated in Ludhiana, Punjab and the sports festival is celebrated every year in February and thousands of people including foreigners attend the event. In addition to sporting events, animals like bulls, dogs, camels, donkeys, mules and other animals are also used. The purpose is to cultivate individual strength for working in the fields and garnering the specifics. The winner is awarded and respected.

The Ladakh Festival is actually a mélange of festivals that are collectively referred to as a whole. Some of these festivals are named Hemis, Ladakh, Losar, and Sindhu Darshan festivals. The Ladakh festival takes place in the month of September and is organized by the state tourism department. The festival is as much of cultural importance as it is traditional. Almost all festivals are performed wither inside a monastery or in the vicinity of one. The summer transforms the valley into a combination of vibrant colors, which stays during the entire course of the festival. The festival has dance, art, processions, yak and dragon dances and what not.