Every part of the world has its own traditions and cultures, which it always tries to uphold. From the language, which is spoken by the people of a specific community to the food that they eat, every element has an important role in the state’s culture and tradition. Hence, the traditional dresses worn by the people of a specific community also play an important role in portraying the distinct culture of the state. Across India, each state in the country has its own specific attire that is culture specific and ethnic to the state it belongs to. It is the distinct and vibrant costumes of a place that add to the festive mood of the festivals. Thus traditional costumes or attires have a vital part to play in determining the culture of any state. Here we take a look at the vibrant traditional dresses of Gujarat.

Gujarat is a state situated in India and shares its borders with the states of Rajasthan, Madhya Pradesh and Maharashtra. The state is known for its diverse culture and traditions. The costumes of the state are quite different and varied from that of other parts of the country. Since the state hosts many cultural festivals all through the year, it also has a wide variety of traditional dresses, which comprise the vibrant costumes worn by the people of the state that reflect its own culture and traditions. Men usually wear a Kurta or Kediyu, while women dress in sarees or Chaniya Choli, though recently Salwar Kameez is also preferred by Gujarat women.

Men usually wear Chorno, which is a kind of cotton pants, and it looks quite similar to a dhoti. Chorno is one of the most common clothing which is found in the state and is hence also readily available. This clothing is adaptive to the hot and warm climate of the state. Chorno is worn along with the Kediyu at the top part of the body. It is frock-like clothing and is worn widely in the state. The Kediyu usually comes in a variety of vibrant colours and is also worn on special occasions. Men wear kurta and dhoti too. The men of Gujarat also wear a headgear called Phento.

Women usually wear the Ghagra or the Chaniya Choli, which is quite popular not only in Gujarat but in other parts of India too. This attire is adorned with vibrant designs and is worn during festivals and other occasions. Chaniyo is another popular attire worn by the women of Gujarat. This attire is quite similar to the Lehenga in appearance. What makes the Chaniyo unique is its vibrant colours, and distinct intricate thread works and mirror works. Women also wear Chunni. Chunni looks quite similar to the dupattas and is usually used to cover their heads. The woman of Gujarat also wears the saree, in a distinct style, which is different from that of the other parts of the country. Apart from these traditional dresses, the people of Gujarat also wear special dresses for special ceremonies. During Raas Gharba, the women wear Ghagra Choli. 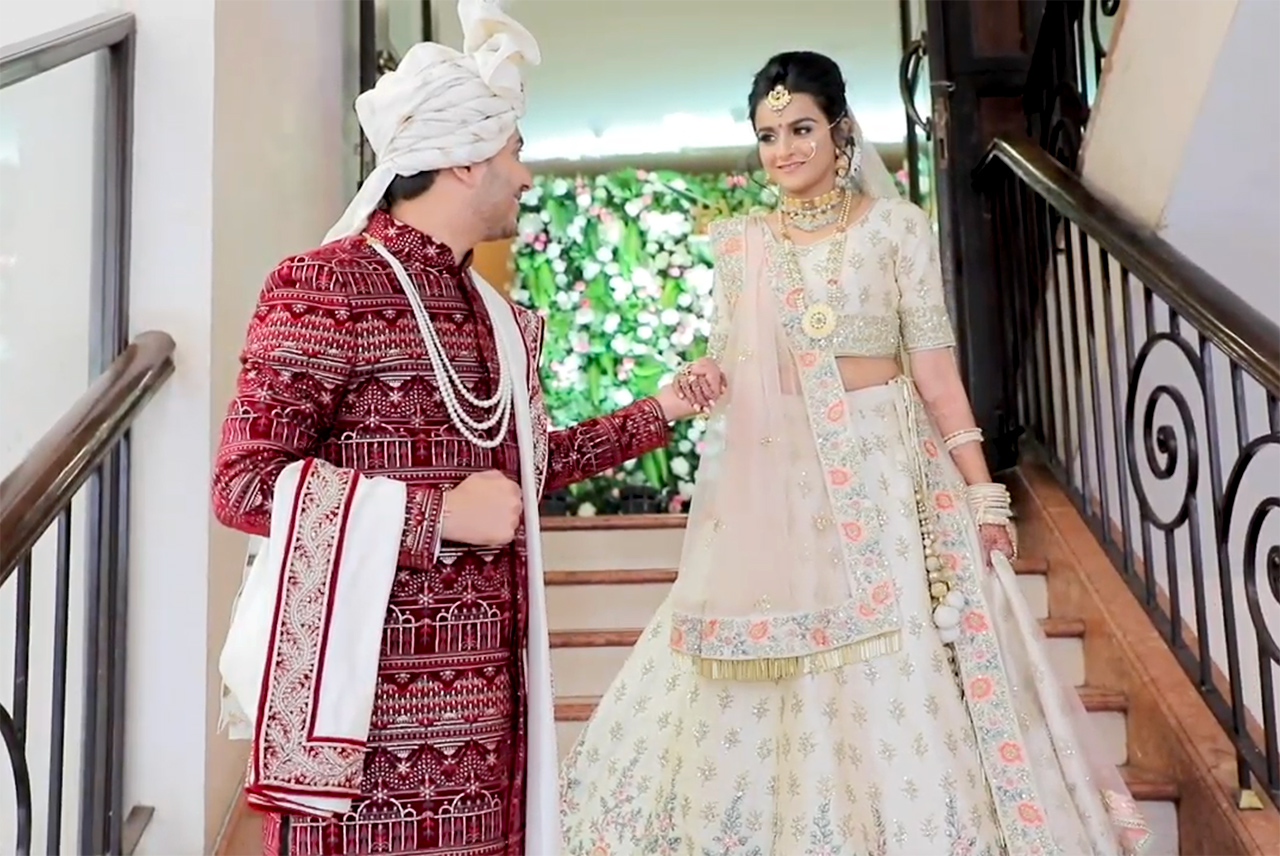 During weddings, the bride and the groom have distinct and traditional attires. Brides usually wear the Panetar Saree or the Gharchola. Panetar Saree is coloured white with a red bandhani border. Charcoal is a saree that is coloured red and has square patterns woven in it. The groom usually is dressed in a Kurtha with embroidery work.
The people residing in the Kutch district, which is situated in the state of Gujarat, is also home to a distinct culture. The women of the district wear a distinct type of Choli named Abha, which is also known as kanjari. Abha consists of a long piece of blouse that is embellished with mirror work and a gold or silver thread work. Apart from these, it can also be observed that the costumes of the state differ across communities, as each community has its particular way of attire.

Features of the Traditional Dresses of Gujarat

The most distinct features of Gujarat’s costumes include vibrant colours, intricate embroidery, and the elaborately designed mirror work. The costumes also include stonework and beadworks. The costumes of the state also embody figurative intricate and geometrical patterns in their designs. Most of the vibrant costumes that form an important part of the culture of the state are usually worn on special occasions.

The state also has several festivals celebrated all year round. Apart from the distinct nature of the costumes worn by the people residing in Gujarat, the jewellery of the state is also quite different from that of the rest of the country. The jewellery worn by the women of the state differs between different communities. The ornaments include Bangles, chains, nose rings, among others. Intricately designed, they form an important part of their costumes. The state’s attire is also quite popular for its Bandhani and Bandhej designs, which are embroidered with Zari and gold threads.

Traditional Dresses of Gujarat in the Present Day

However, in the present times, the costumes worn in the state has also undergone a significant shift. With the arrival of modernity, many attires have changed in their appearance. Women mostly wear salwar kameez while youngsters mostly prefer skirts, jeans, and tops. The western influence is evident in the clothing style of the people of the state. However, on special occasions, the people of the state usually prefer to wear their traditional attire over modern costumes. However, in many rural areas such as in the district of Kutch, people mostly wear their traditional attires.