Situated in the Southern part of India, Karnataka is one of the most popular and highly sought after tourist destinations of the country. It is bordered by the five states of Kerala, Andra Pradesh, Telangana, Tamil Nadu, and Goa, the state is known for its diverse and rich cultural heritage. Blessed with fascinating beauty and majestic grandeur, the state of Karnataka has secured itself a unique place in India. From the mesmerizing and enchanting scenic beauty of Coorg (also known as the “Scotland of India”) to the urban city of Banglore (termed as the “Silicon Valley of India”).

From the grandeur of many majestic historical sites such as Hampi, to the capital of the ancient Vijayanagara Empire. The state has something to offer everyone from any sphere of life. The art, culture, and music of Karnataka have an essential role to play. They precisely portray the diversity and traditions which are prevalent in the state. The people of the state speak several languages, including Tulu, Kannada, Konkani, Kodava, Byari, and Urdu.

Culture and Traditions of Karnataka

The traditional dresses of the people of Karnataka rightly depict the elegance and simplicity of the costumes worn in south India. The state of Karnataka is home to many diverse communities, who have their style of dressing. The women of Karnataka usually dress in sarees, while men usually prefer to wear the dhoti and Kurta.

The principal Traditional Dress of the men in Karnataka is ‘Panche’ which is worn underneath the waistline accompanied by a shirt on top. It is otherwise called Lungi, Dhoti or Veshti and so forth. An ‘angavastram’ which is a silk or cotton muffler is set on the neck covering the shoulder. Lately, just the rural men of Karnataka stick to Panche, as their regular ensemble. Mysore Peta is the customary hat in Karnataka for men. The majority of the men utilize modern wear for every day reason.

People of the Kodagu have a distinctive way of dressing as well as accessorizing. Women of the locale wear sari in a unique manner. The pleats are tied at the back and the pallu is set over the shoulder. A conventional Kodagu saree is made with both silk and cotton. The themes created on these sarees are lively and address the way of life in Karnataka. The body of the saree is embellished with prints, stripes or floral work.

The men enhance their outfits with decorative sashes, swords, and daggers. The whole look is supplemented with dark robes or tunics, giving it an imperial look. Men likewise wear gold-trimmed turbans with their outfits for celebrations, weddings, and various events.

Traditional Dresses of Women in Karnataka

Karnataka is a place where there is rich legacy, culture and customs. The unbelievable silk sarees of Karnataka Silks have become a fundamental piece of Karnataka’s and India’s custom. These silks are one of a kind and exquisite in each aspect. It has a scope of stiff Tangails, flowy silks, rich chiffons and weighty brocades which can be effortlessly incorporated in any style. Bangalore and Mysore are world acclaimed and reputed for their glimmering silks.

The Mysore Silk is inseparable from the wonder and magnificence. Mysore silk has been enlisted as Geographical Indicator under Intellectual Property Rights. Karnataka is the country of Mysore Silk. Karnataka sericulture has a background marked by over 215 years. In 1785, the Tiger of Mysore Tippu Sultan setup sericulture in Mysore realm.

The Mysore crepe silk is worn mostly for office or work environments, more on account of its light-weight, and simpler upkeep. It is a flexible hazy crepe silk supplemented with zari edges. These saris are colored in splendid tones after the finish of the weaving. It is utilized for both everyday and occasional reasons. In current days, Mysore crepe salwars and Karnataka handloom’s cotton additionally frames part of ladies’ clothing of Karnataka.

Arani Silks, Valkalams, Kora Silks, Patola Sarees, Crepe Silk Sarees, Chiffon Sarees and Raw Silk sarees are also different assortments of womens’ attire in Karnataka. The Ilkal and the Molakalmuru sarees remain as the ethnic motifs of Karnataka. Kornadu sarees are a combination of cotton and silk. The saris are woven in a blue cotton yarn along with a silk yarn in other various shades. The themes in every sari is different and the body is either presented with checks or stripes. These sarees are utilized as day by day comfort wear.

Usually worn during festivals and special occasions, Kanchipuram sarees of Karnataka are very popular throughout the country. It comes in several colours with exquisite designs. The saris are woven from pure mulberry silk threads and Zari from South India. The design and hue of the border are normally very unique in contrast to the body. If the pallu (the draping end of the sari) is requested in a different shade, it is first independently woven and then gently joined to the Sari. In an authentic Kanchipuram Silk Sari, body and border are woven independently and afterward interlocked together. The joint is woven firmly to such an extent that even if the saris tears, the border won’t come off. That separates the kanchivaram silk saris from the others.

The saris are recognized by their wide contrasting borders. Temple borders, checks, stripes and florals (buttas) are common designs found on a Kanchipuram sari. The patterns and motifs in kanchipuram saris were influenced by pictures and scriptures in South Indian temples or natural aspects like leaves, birds and animals. These saris with rich woven pallu show the compositions of Raja Ravi Varma and legends of Mahabharata and Ramayana.

The Ilkal sarees are mostly traditionally worn by the women of rural areas. These sarees are quite popular in the country owing to the unique method employed in weaving it. The Ilkal sarees are named after the town of Ilkal situated in the Bagalkot district of Karnataka. These special sarees are woven uniquely by employing a loop technique called Tope Teni.  The fundamental body of the Ilkal saree comprises simple patterns and an exquisite pallu with complimenting motifs, for example, temple towers, palanquins, elephants, and lotuses.

The main charm of an Ilkal saree is the border, which is around 4 to 6 inches broad. Both base and pallu of the saree contain captivating borders that give an unbelievable look to the saree. The tones that are normally utilized in the saree are pomegranate red, peacock green, and parrot green.

The saree is handwoven by the weaver with utmost attention and patience. Hence these sarees are of high demand both locally as well as nationally.

Kasuti is a traditional type of folk embroidery practiced in the state of Karnataka. Kasuti work which is complex at times includes putting up to 5,000 stitches by hand and is generally made on dresswear like Ilkal sarees, Ravike and Angi or Kurta.

Kasuti embroidery work includes embroidering complex motifs like gopura, chariot, palanquins and conch shells. Locally accessible materials are utilized for Kasuti. The example to be weaved is first set apart with charcoal or pencil and then proper needles and threads are chosen. The work is challenging and includes checking of each string on the material. Different assortments of stitches are utilized to get the ideal pattern. Some types used are Gavanthi, Murgi, Negi and Menthi. 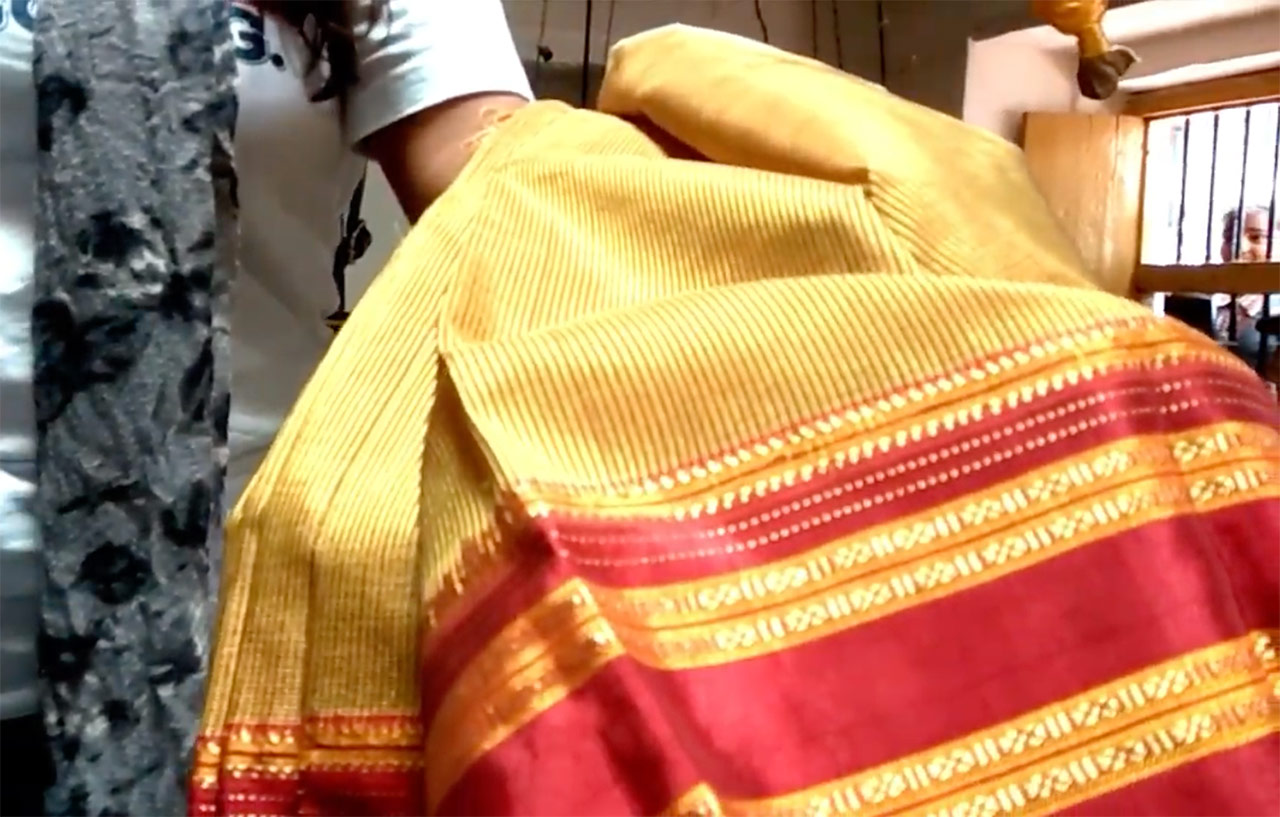 A balance of extravagant and rustic, Guledgudda Khana appears to be obscure, yet is saturated with history.

Hailing from Guledagudda town in the Bagalkot area of North Karnataka, this eponymous weave overwhelmingly finds patronage in select locales of its home state. The fabric is frequently altogether known as Guledgudda Khana, with “khana” being a blouse textile of the state. It was widely esteemed in the earlier times and was worn by almost every woman.

The customary drape of Guledgudda Khana involves a rich blend of hand-spun and handwoven silk and cotton, with intricate vivid motifs celebrating cultural and religious symbols, for example, tulsi pan (the leaf of tulsi plant), theru (a chariot), Suranarayana Mukta (the Sun God) and ane hejje(elephant strides) among numerous others.

Langa Davani or Half sari

Known as the half-sari from Karnataka, the Langa Davani is a traditional two piece sari that was initially worn in South India generally by young ladies. It is frequently given as a blessing in coming of age functions by the families of the girls. The davani sari takes after the usual one in looks but is more like a ghagra choli in plan. It comprises a skirt secured with a drawstring around the abdomen and a fine fabric around 2 to 2.4 meters in length called the “davani”,  joined to the skirt and tossed over the shoulder like a pallu.

Davani sarees are a lot simpler to wear than a saree and this is their principle advantage. In spite of the fact that you get the saree look, you just need to slip on the pieces and pin them set up without messing with hanging, creasing, etc.

Traditional Langa Davani patterns are more on the simpler side, with the shading range not wandering past the normal shades of green, yellow or red. The main ornamentation would be the boundaries, which were gold printed or with little motifs of religious and natural themes. For less significant celebrations, cotton and coarser silk textures were utilized instead of the dressier silk

Along with their unique attire, the women of Karnataka also adorn themselves with distinct and beautiful ornaments. The ornaments worn by the women include the Netri Chutti. It is worn on the forehead. The Mavinakayi Addigai, a necklace usually made of gold with green and red stones embedded in it.

The Mavinakayi Addigai is one of the most significant ornaments which is also worn by the bride. The Laxmi Sara worn by women is a beautiful golden chain made up of small golden coins attached to it. The Vyaghra Nakhas, is a golden pendant worn mostly by children. It is said to represent the courage of a tiger and is believed to ward off every evil spirit. The Kadagas are the traditional bangles which are widely worn by the women of Karnataka.

The state of Karnataka has undoubtedly kept its traditions and rituals intact amidst the fast-moving world. The rich cultural heritage and traditions of Karnataka indeed express themselves in the traditional dressing styles. While many people continue to dress traditionally, changes to this can also be observed in urban cities. as. In Bangalore modern dresses are mostly preferred.