Traditional Dresses of Kashmir – Reflecting the Grandeur of Paradise on Earth

If you are a fashion enthusiast, you must have come across the elegant embroidery and intricate designs of Kashmiri dresses. The costume of the region depicts the valley’s richness in culture and heritage. Owing to the cold climate, mostly wool or silk garments are famous among the Kashmiri population. The traditional dress of the Kashmiri people is vastly different from the formal dresses in other parts of the country.

Let us dig into the beautiful journey to explore the traditional dresses of Kashmir People:

History: A Driving Force in Determining the Culture

To understand the culture and tradition of a region, it is essential to understand its history. History is a driving force in determining a region’s present culture and customs. The Persians and Greeks had a stronghold in the area, which is presently a part of the Indian state of Kashmir. Thus, it became inevitable to have no Greek or Persian influence in the customary practices of Kashmir. Later, the Aryans, too, influenced the lifestyle of the people of the region.

According to Hiuen Tsang, a Chinese traveller, the dress of the Kashmiri people is similar to that of the Persians. The costumes made of white linen and endowed with leather doublet showcases the Persian influence in the region.

Even the embroidery designs of the clothes are a result of western influence. The incredible artwork and embroidery styles show the impact of more than one culture.

The ethnic Kashmiri apparel consists of a kurta and a salwar, worn by men. This Kurta-salwar dress worn by men resembles the Pathani costume. However, in the valley, it is usually called the Khan Dress. They top the look with a short waistcoat which they call Sadri.

The valley men also had long bell sleeve outer robes as early as their wardrobe in the old times. This was the Chogha, and it is no longer in trend in the valley. Similarly, the headgear, which was a pride of the male attire in the past, is no longer visible in the markets now. The people of Kashmir call this headgear a close relative of the western Indian turban.

The Muslim men still wear a turban on occasions like marriage. Although, this fashion resembles the Pathan attire rather than the traditional Kashmiri clothing. The ordinary dress of the men of Kashmir also includes Churidar Pajama. This loosely fitted trouser is very comfortable and warm.

Women wear Salwar-kameez along with a dupatta, and they usually cover their head with a headscarf. Pheran, along with a Pashmina shawl, completes the look during the winter season. The Kashmiri attire for women is entirely different from the attire prevalent in India’s Central and southern India, and the dress is similar to the Afghan and Persian female dresses.

The traditional dress of Kashmiri women shows close resemblance with that of the Pashtun women. The pheran is unique to the Kashmiri tradition. The headscarf is an integral part of the attire. The Kashmiri people call it Kasaba or Taranga. There is a peculiar way in which the Muslim and Pandit women of Kashmir wear the Kasaba. They tie it on the hanging bonnet, making it fall up to the heels from behind.

More into the Traditional Dress of Kashmir

Pheran is a long cloth that covers the entire body up until the knees. Even men and kids wear Pheran during winters, and it may or may not have a cap attached to the cloth. Kashmiri women wear Pheran even during other seasons as a sign of modesty. The material and fabric of the pheran determine the use. For summers, lighter fabric pherans are in preference.

The Kashmiri Pandit women usually tie the pheran on their waist with Lihung. Lihung is a folded material used as a belt.

About five to six decades ago, the grass shoes, known as Pulharoo, was an essential part of the Kashmiri outfit. Khraw, the wooden sandals were also famous. However, in today’s time, they are no longer in use.

The Kashmiri shawls are a pride of the valley. No one in the world can deny the beauty of the Shawlwork of Kashmir. The shawls are not only designed with beautiful embroidery but are warm as well. You cannot find a shawl as soft and warm as the Pashmina shawl, even if you set out on a world tour to find one.

Jewellery to Complete the Look!

The traditional dress is incomplete without mentioning the jewellery of the Crown of India, Kashmir. Jiggni and Tikka were the jewellery pieces that were extremely popular during the past however lost competition to the new ornament pieces.

Women usually wear beautiful earrings, anklets, and bangles as a part of the ornamentation in clothing. The married Kashmiri Pandit women wear Dejharoos which are similar to the central Indian mangal-sutras. The Dejharoos consist of two decorative gold pendants, identical to the Southern mangal-sutra designs.

The Muslim women of Kashmir usually sum up their look with abaya (or Kasaba), which forms a part of the regular attire. The unmarried Muslim women wear skullcaps decorated with gold thread embroidery, and silver jewellery is trendy among the Muslim women population of the region.

Representation of Kashmiri Culture in Bollywood 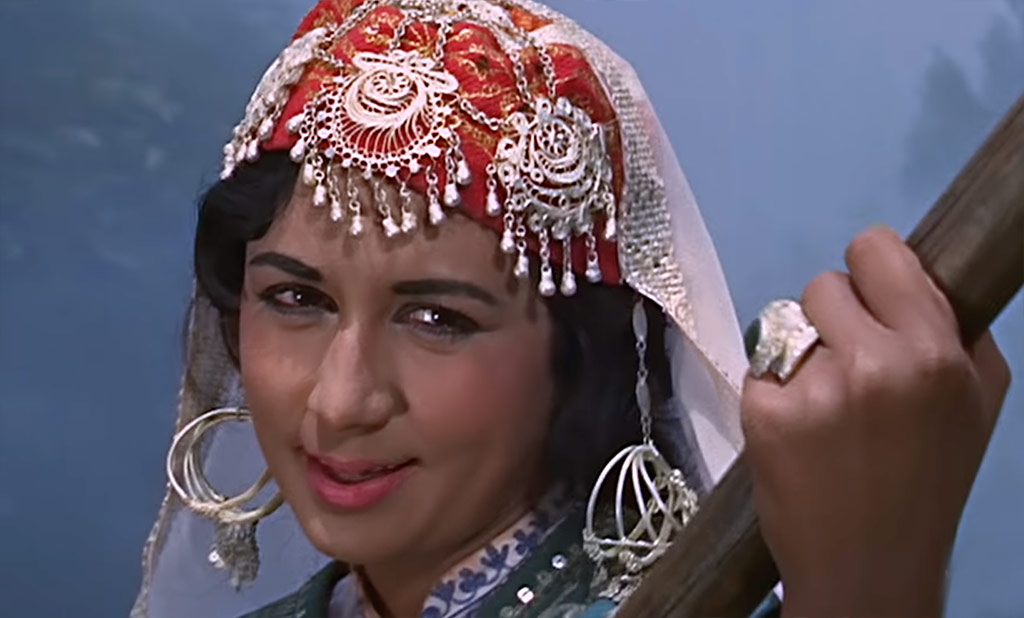 Are you a fan of Bollywood? Then there’s no chance you would have missed the famous Kashmiri dresses showcased in movies and songs. Bollywood is a big admirer of Kashmiri culture. There have been various instances where we can feel the love for Kashmiri culture. From the 1965 film Jab Jab Phool Khile to the 2018 movie Laila Majnu, Bollywood proved that the customs and traditions of the valley of Kashmir are much loved.

Sharmila Tagore’s outfit in the film Kashmir ki Kali left everyone in awe. In 2011 superhit, Rockstar, actress Nargis Fakri was beautifully dressed up as a Kashmiri bride, with a beautiful Kalpush (headgear) and embroidered Lehenga.

Kashmir is a beautiful place, and so is the Culture of Kashmir. The people of Kashmir retain the cultural and traditional beauty of the region by maintaining and adoring the formal dresses of the area.

Some other costumes and garments, such as suthan and kurta, form a part of the unisex fashion of Kashmir. Many garment pieces have also lost their position in the hoard of the new fashion trends. However, many have also evolved with time. Today, one may find people wearing attires showing a fusion of the traditional and the modern dresses.