Meghalaya is one of the most beautiful states of North-East India. The place is known for its rich biodiversity, culture and traditions, heritage, natural beauty, serene mountains and hills and its peaceful and calm environment. Meghalaya  is home to various tribes and communities who have their own customs, culture and traditions which they like to showcase through their traditional outfits and attire. Some of these tribes are the Garo, Khasi and Jaintia. One of the main and primary sources of income and livelihood in Meghalaya is through weaving. The Garos are the most talented, skilled and experienced weavers of the area.

All of these tribes have their own distinct features like the way of dressing and clothing. Even today, women in Meghalaya can be seen wearing their traditional attire. Going deep into understanding the people of Meghalaya’s culture and traditions which are related to their attire, the first attire we will talk about is known as ‘Jainsem’.

Jainsem is a traditional outfit of the women in Meghalaya, more specifically the women of the Khasi tribe. Jainsem is a piece of clothing which is usually made of mulberry silk. It is worn with a blouse and a cotton shawl over it which is known as tap-moh khlieh. A Jainsem covers a woman’s entire lower body from their waist to their ankles.

Jainkup is made for and worn mostly by the elder women of the Khasi tribe. It is made of woolen cloth. This is worn with a full sleeve blouse and a full neck work. The women compliment and accessorize these with pure gold and silver ornaments and jewellery.

These are mostly worn by women during the Khasi festivals, especially the festival of Ka Shad Suk Mynsiem. The female dancers wear Jainsem and Jainkup and compliment their dresses with necklaces made up of red coral beads covered in foil, beaded jewellery with various colors and designs, golden earrings and a golden or silver crown which consists of silver threads in its back. Their dress also comprises two rectangular pieces of clothing which are decorated and embellished with gold threads. This overall attire makes a woman look very sophisticated and stylish.

Dakmanda is a handmade and hand woven small piece of clothing like a lungi which is wrapped around the waist. It is worn mostly by the women of the Garo tribe. The women wear a blouse along with a Dakmanda. The traditional dresses of the women of the Garo tribe vary depending on where they are residing, whether it is a densely populated or crowded area where the women wear long cotton dresses or it is faraway village in the hills where they wear an eking, which is a small cloth wrapped around their waist.

The main and primary source of income and occupation for the people of Meghalaya is agriculture and around 80% of the population of Meghalaya’s livelihood depends entirely on it. During the harvest and post-harvest season, the men of the Jaintia tribe cover their heads with a checkered piece of garment known as a Kyrshah. At the time of festivals, occasions or events, the women contrast it with beautiful outfits which include a velvet blouse and an ankle-length sarong known as a Thoh Khyrwang and gold and silver ornaments and jewellery. Both men and women dress at their finest in beautiful attire during festivals.

Mekhla is one of the most popular, fashionable and admired traditional outfits of Meghalaya. It is weaved from the beautiful and eye-catching Muga silk which makes it the most gorgeous and stunning piece of cloth. Mekhla is a very elegant and attractive outfit.

Jewellery and Ornaments of Meghalaya

Traditional dresses of Meghalaya are well complemented with artistic jewellery pieces, let’s take a look at some of the important jewellery and ornament pieces.

This is another unique and beautiful piece of ornament worn especially by the women of the Khasi and Jaintia tribes. The Kynjri Ksiar is a 24 carat gold pendant adorned by the women during festivals or occasions.

For the people of the Garo tribe, they wear a necklace known as Rigitok, which consists of thin fluted stems of glass strung with fine thread. This is worn by both the men and the women of the tribe on occasions.

As far as the men of Meghalaya are concerned, the traditional attire of the men of the Khasi tribe and the Jaintia tribe are the same.

Their traditional outfits include a long, unstitched cloth wrapped around the waist. They wear an unstitched dhoti which they compliment with an embroidered or embellished shirt or jacket. During their festivals like Ka Pom-Blang Nongkrem, the men also carry a sword in one hand. They also wear a beautiful silk turban, especially during the festival of Ka Shad Suk Mynsie. This can be seen worn by the male dancers during the festivals. The people there wear all these outfits with pride as they believe these showcase their heritage and culture.

Even though the women in Meghalaya can still be seen wearing their traditional attires, the men have restricted their traditional outfits and clothing only to festivals and special occasions to keep in touch with their culture and heritage.

The traditional attire of the men of the Garo tribe includes a hand-woven loincloth which they weave by themselves. After agriculture, weaving is the main source of income for the people of Meghalaya and the men of Garo tribe are the most skilled and talented weavers. They earn their livelihood through weaving.

The bride on her wedding wears a traditional Khasi outfit which is a Jainsem or a Dhara. This is a yellow or saffron colored mulberry silk piece of cloth. Their entire outfit comprises several pieces of clothing and jewellery. They wear a gold or silver crown which has a peak attached to its back. The outfit includes two pieces of contrasting fabrics which are worn on each shoulder. The entire attire gives the bride’s body a cylindrical shape and the bride looks very beautiful and elegant. 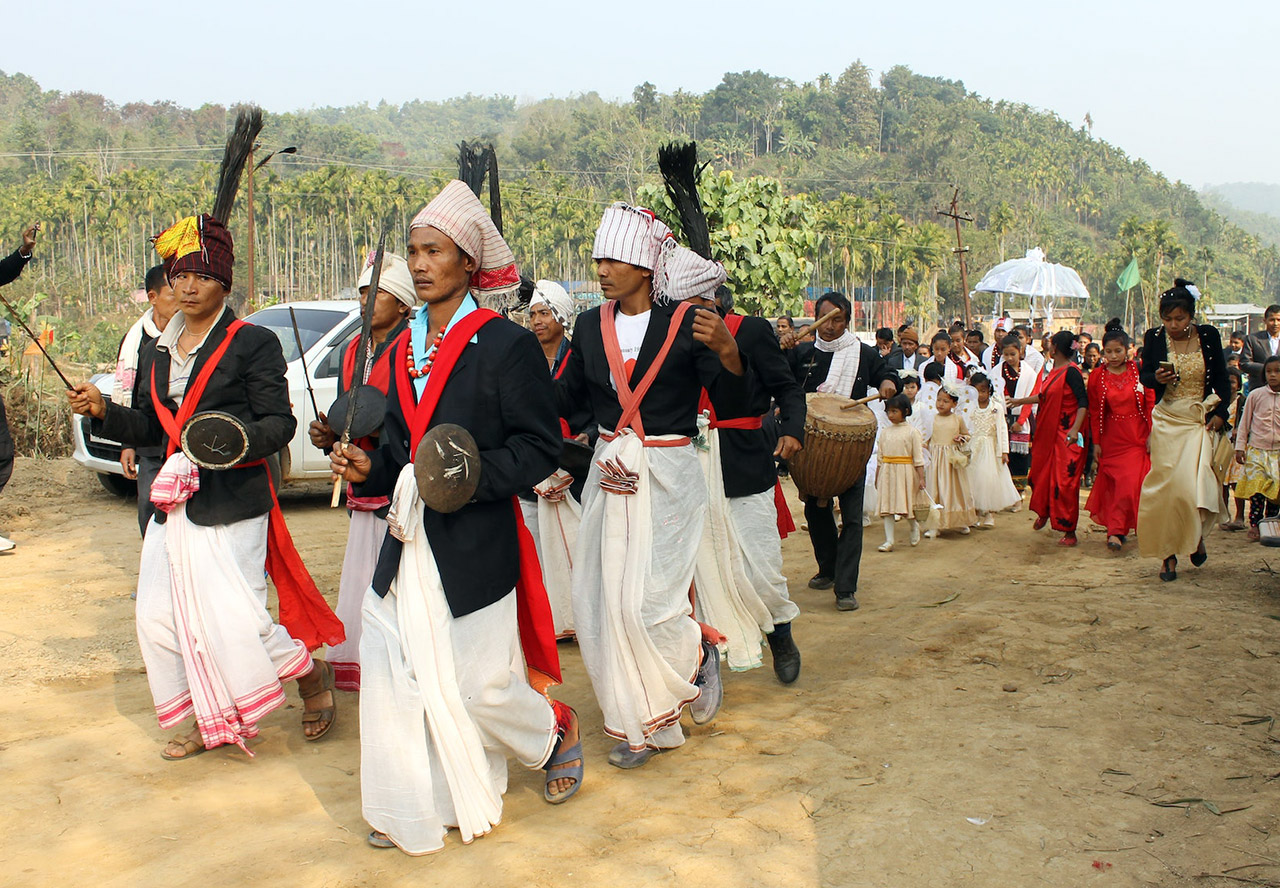 The groom on his wedding day also wears a traditional outfit known as a Jymphong. A Jymphong is a sleeveless coat which looks similar to a western waistcoat. It has yellow lines, floral motifs and symbolic red cock motif with a v-shaped neck, leaving the arms exposed. It is fastened and tied at the front with the help of Chinese frog fasteners. It is usually deep blue in color and decorated with silver or golden tassels at the bottom end of the garment. For the waist downwards, the men wear a red colored dhoti known as a Jainboh. A Jainboh is made of silk and has golden threads on its border. For important occasions like festivals or weddings, the Khasi men also wear a turban known as a Jainspong, which is usually yellow and red or maroon in color.

As we already know that Meghalaya is one of the most beautiful and culturally rich regions of the country with various tribes residing there, some of which are the Garo, Khasi and Jaintia tribes. Each of these tribes has their own distinct way of clothing and traditional outfits. The people of Meghalaya take immense pride in the rich culture and heritage which they like to showcase through their attire and outfits. Their dressing style and outfits are quite simple yet they look extremely beautiful, elegant and eye-catching. Even today, the women in Meghalaya can be seen wearing their traditional attire while men have restricted their outfits only to special occasions like festivals or weddings.

Traditional Dresses of Punjab, Celebrating the Colors of Vibrancy