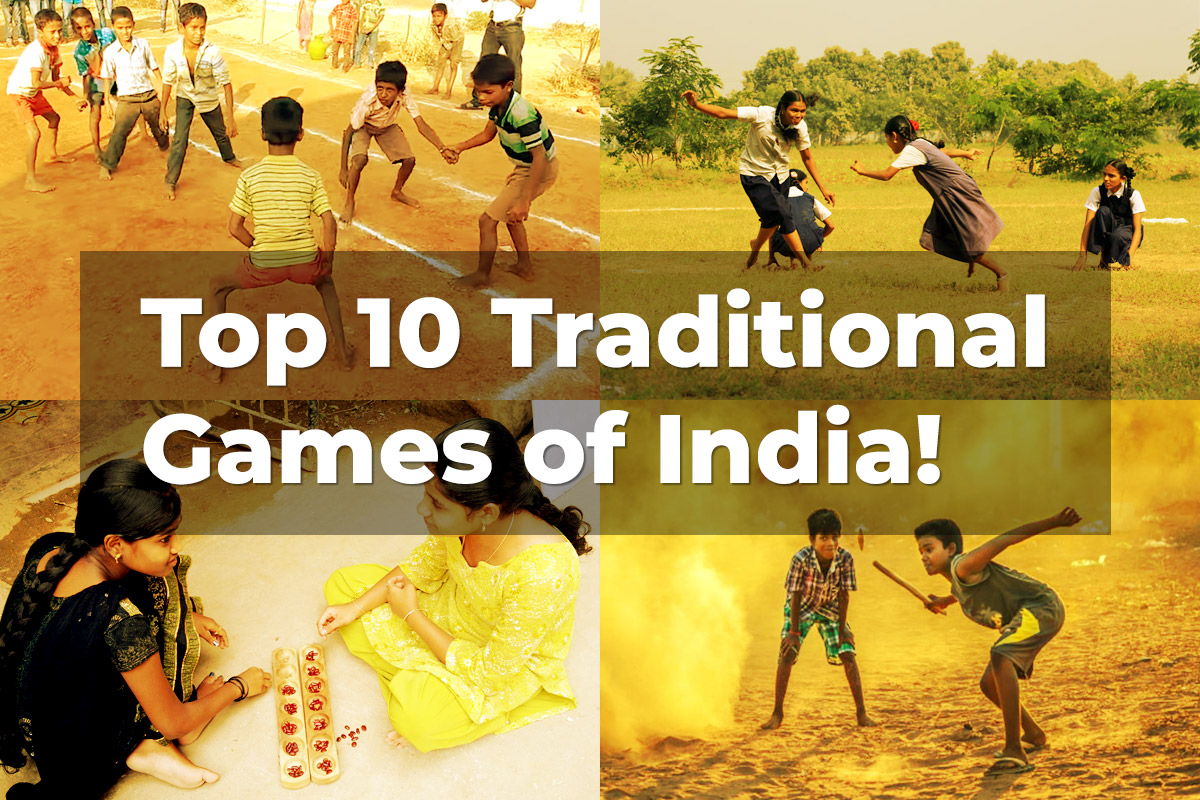 We quite often lament when we see our kids glued to the TV or phone. Especially during the pandemic when taking them outdoors seems highly impossible. And thus, as we watch a generation of children find entertainment in gadgets and technology, we cannot help wondering and remembering the games of yesteryears. Those were the traditional games that took up a large stock of our time after school. They kept us on our feet, quite literally, running around on quiet streets or terraces. They helped us learn about teamwork and deep friendships. And of course, about a childhood that has shaped our lives forever.

So what are these traditional games that I am harping on about? How are they special and different from the Candy Crushes and Counter Strikes of today? Let’s take a look at 10 traditional games of India that have defined childhood for entire generations. This list comprises both indoor and outdoor games, and hence, it is beneficial for both physical and mental strength. 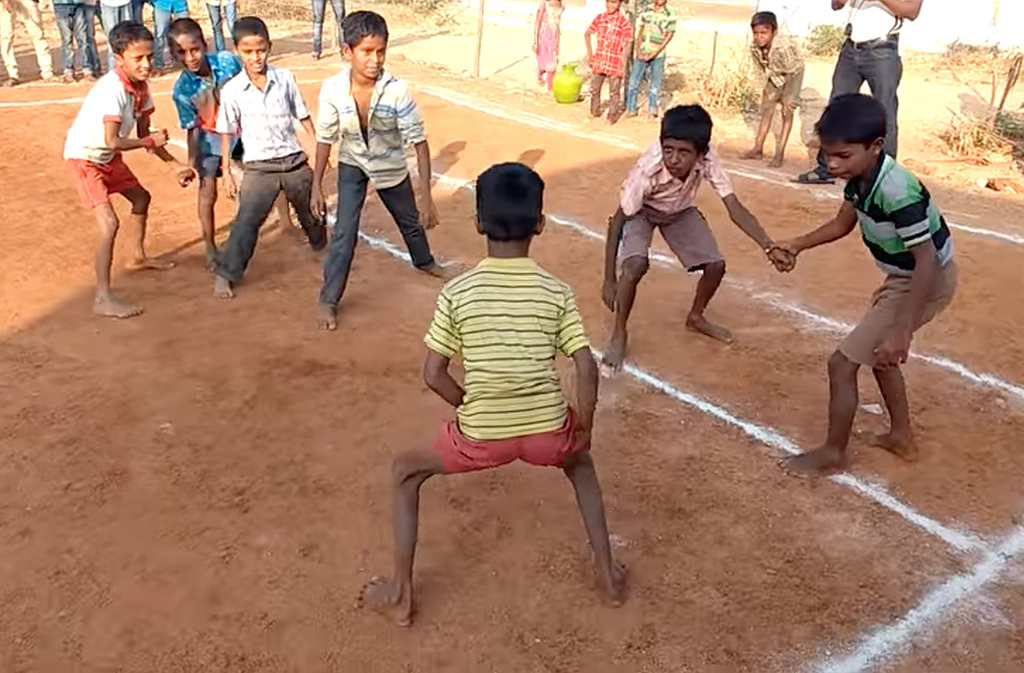 Let’s begin with one of the best-known games of the country. A game played without any gear or equipment it is based on pure strength and strategy. Played between two teams the game involves a single player from each team trying to touch down and break into the area of the opponent team. The player needs to touch as many players of the opposite team while reaching the line. And all of this while humming ‘kabaddi’. It certainly is a game that can keep you on the edge of your seat.

Again a team sport, Kho Kho is particularly popular in schools. The first team sits in alternating directions while the other team runs around them. The aim is for the sitting team to catch as many from the running team. But it’s a sport that requires strategy and presence of mind. A player from the team sitting starts the game and touches his teammate to continue the chase.

Played with our dear old marbles, kancha or lakhoti is also known as golli or goti. The game is about trying to strike a particular marble amidst many, using another marble. The striker marble is held between the middle finger of one hand and pulled by another before release. There is no set limit to the number of players who can play this game.

The Indian version of one of the most well-known childhood games of all time, nondi (in Tamil Nadu) is also called stapoo and kith kith. A ladder grid is drawn on the floor and numbered. A stone or any other object is then thrown on any of the numbers, and the player has to hop their way to the numbered block without stepping on the edges or any other block. Played inside apartment stairways or flat surfaces, this game sticks out as an easy game to play in both large and small groups.

Alright, we have probably heard this phrase several times. But how many of us really know what this game entails? Gilli Danda is a sort of fusion game between cricket and baseball. The Gilli is a small stick that needs to be hit by the danda or the longer stick as far as one can. After hitting the Gilli, the player needs to run to a particular point before the opponent team can retrieve the Gilli. Gilli danda is also known as Lippa in some parts of India.

Another popular term lattoo quite literally means the spinning top. Though the word is also used often in various other meanings and forms, the game itself is pretty simple. It is all about making the top spin for the longest amount of time. And also, mastering the skill of lifting the moving top off with the string. The tops were initially made of clay and later replaced with wood. However, one can find many different tops today in the market, some even with lights and sound effects.

One of the oldest indoor games of India, Chaupar finds mention in the epic Mahabharata. Also called Pachisi, this board game was extremely popular in ancient times. Played with pawns or shells the dice is rolled and the players strategize the movement of their pawns. Pachisi can be better understood as an older version of the modern-day Ludo.

Another indoor game Pallankuli finds its origins in South India. Played earliest in Tamil Nadu the game spread throughout the southern states and even to Sri Lanka and Malaysia. Played on a board that consists of rounded or cup-like columns the game is played with seeds or shells. The idea is to move the shells or seeds from one cup to another in a clockwise direction till the cups are empty.

A common street game one might often have seen children trying to topple off a stack of stones. One player from the team gets three chances to knock off the pile of seven stones with a ball. The entire team then tries to restore the stack before being out. Played with two teams it’s a great game that requires minimal props. This game is known by different names, including pithoo, satoliya, and more.

This is a standard and staple game which has probably left its mark on family functions, social events, train journeys and much more. A fun game filled with music and lots of soul, Antakshari is one of the most loved and played game. Perfect for any occasion, it consists of two teams. The first team starts singing, and the last letter of where they leave off the song is the letter that the other team picks up and begins a new song. This game can go on forever and lightens up the mood with rhythm and music.

There are many other games that most of us can easily remember and recognize. Hide and seek or chuppam chhuppi, langdi, gutte, chain chain, four corners, lock and key, maram pitthi (similar to dodgeball) and many more such games have been an integral part of our lives as children. 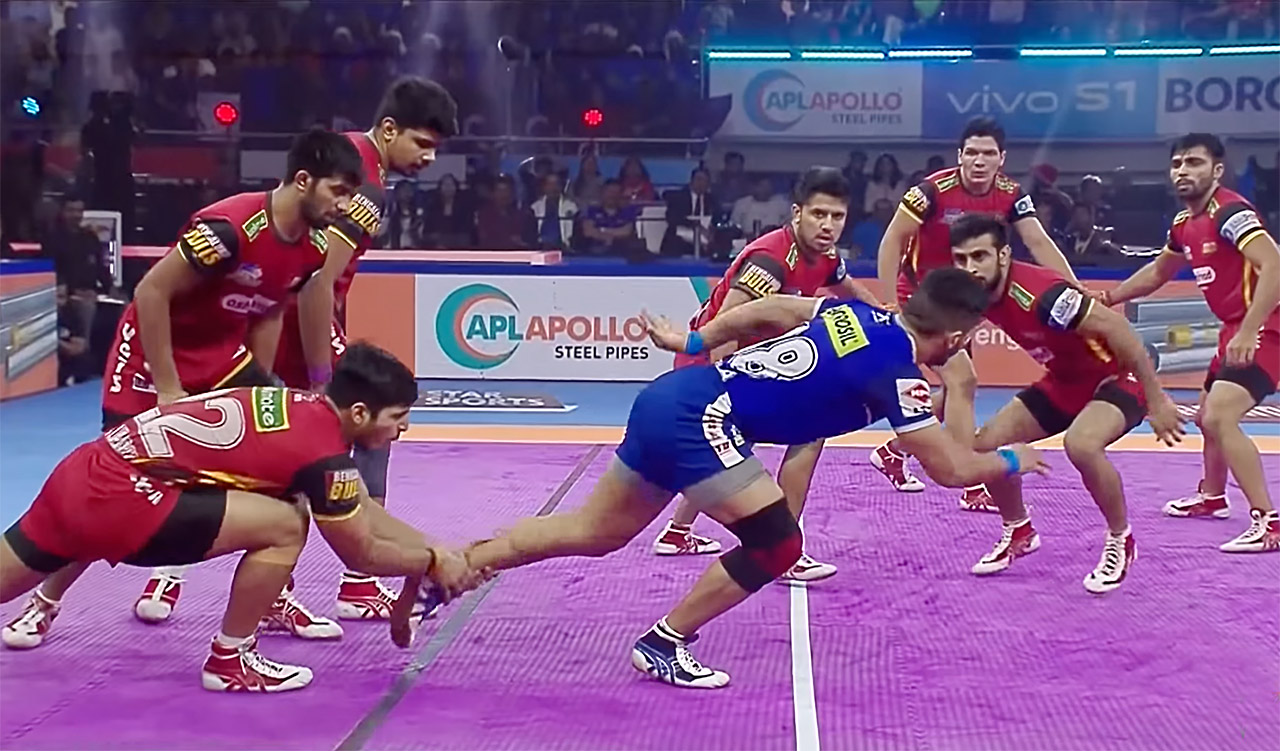 Of course, technology has overpowered our lives today. Children are happy playing video games or online sports. Yet, one cannot say that childhood games have disappeared or lost their importance. Even today, in apartments or closed localities, children often meet up in evenings to play. Their games might include cricket and football too, but the traditional games continue to hold forte in their little hearts and minds.

On the other hand, some traditional games such as kabaddi have thankfully made a huge comeback with the backing of sponsors and sports channels. With leagues and the support of popular sporting and other celebrities taking interest in the game, kabaddi is surely being showcased on larger platforms. Similarly, kho-kho is also trying to find its place and remains a popular game especially at school.

Why are Indian traditional games important?

Any sport or game should be given an important place in the routine and curriculum of a child. Sports help to build physical and mental strength of its players. However, with traditional games, the biggest advantage is its ad hoc existence. It does not require expensive infrastructure or dedicated coaching. Though the more popular games, such as kabaddi and kho kho do have international tournaments, aside from these the other games are pretty much localized. The true flavour of these games lies in their accessibility and ease of play.

Also, one can look at them from a traditional, social and cultural aspect too. Children get together in their free time and form a camaraderie that helps them build social and cultural bonds. These children come from different families, religions and social backgrounds. Yet, they find a common ideology and strategy plan while coming together to play these games. Whether the children are in rural or urban areas, or from any economic strata, these games do not require them to be anything additional than themselves.  Also, not to forget the understanding of real team spirit is often nurtured unaware through unassuming traditional games.

Not for Kids Alone

Traditional games are not necessarily limited to kids alone. Some of the indoor games can be played by families, and are popular with women. Hopscotch, for example, is often usually played by young girls. Similarly, antakshari is a great game that can be played with teams of varying generations. The essence of these games is to bring people closer and help them interact in constructive ways.

Finally, traditional games in India have a rustic and local flavour to their method and techniques. Their names, as well as the style of playing, are seeped heavily into the local, regional, and cultural nuances of its surroundings. And hence because of this, often these always become much more than mere time passing games. They become a means of building teams, characters, strategies and a deeper understanding of true core values.