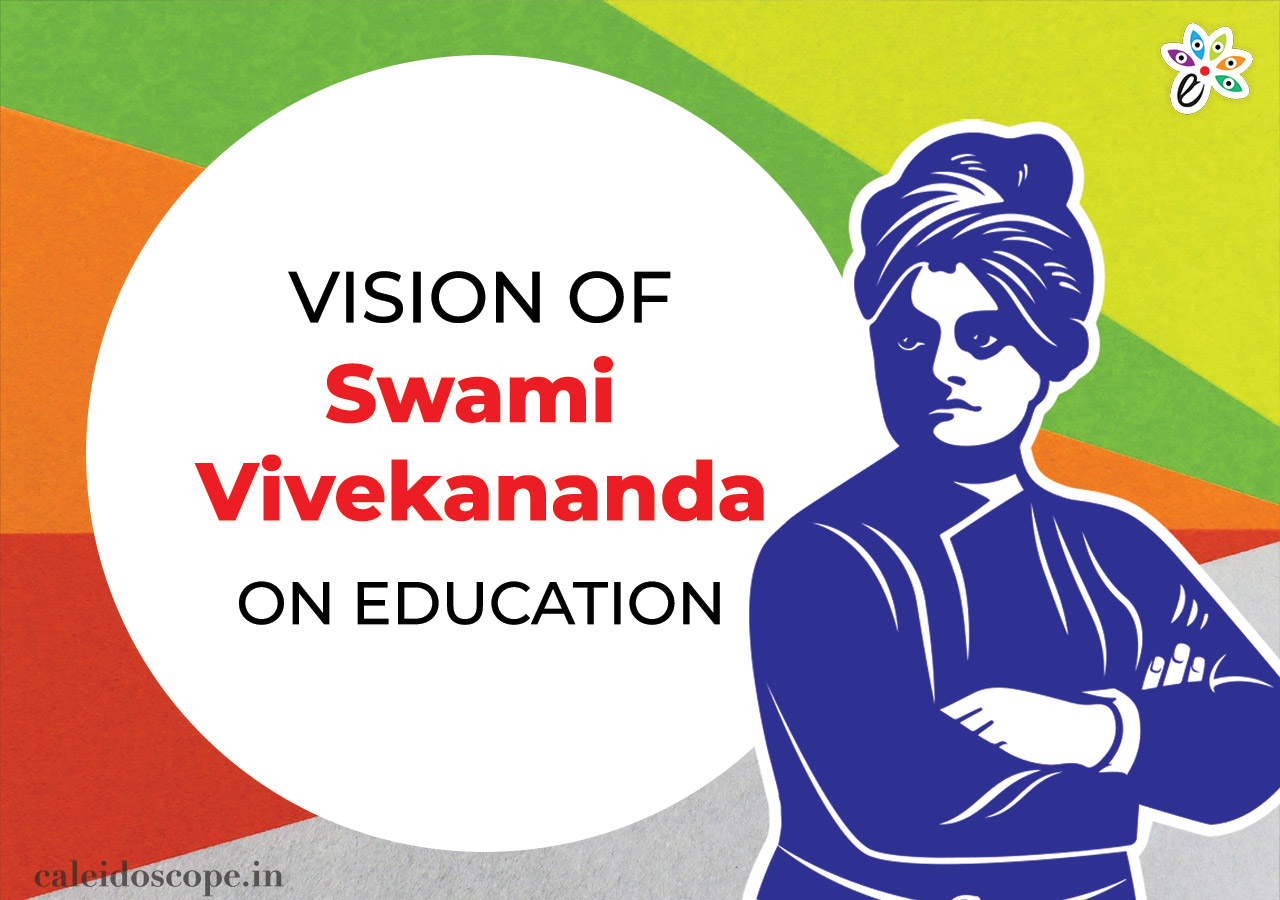 His Early Life Swami Vivekananda was born on 12th January 1863 with the birth name Narendranath Datta (Narendra or Naren) to father, Vishwanath Datta, a Bengali barrister, philanthropist, novelist, and an attorney at the Calcutta High Court and mother, Bhubaneswari Devi, a dedicated housewife. Swami Vivekananda’s grandfather, Durgacharan Datta, was a Sanskrit and Persian scholar who at the age of twenty-five, became a monk and had to leave his family. Swami Vivekananda was born into a prominent and respectable Bengali Kayastha family in Calcutta and had eight other siblings. From a very young age, Swami Vivekananda was interested in spirituality because of his mother’s religious nature. He even used to meditate in front of the images of gods and goddesses like Shiva, Rama, Sita, and Hanuman. He was also captivated by monks.

Swami Vivekananda was the only student who received first–division marks in the Presidency College’s entrance examination. He was a keen reader and was passionate about an ample range of subjects like philosophy, religion, art, social science, history, and literature. He was fascinated by Hindu scriptures such as the Vedas, the Bhagavad Gita, the Upanishads, the Ramayana, the Mahabharata, and the Puranas as well. Swami Vivekananda knew Indian classical music and he even studied Western philosophy, European history, Sanskrit scriptures, and Bengali literature. He passed his Fine Arts examination in 1881 and in the year 1884, he completed his Bachelor of Arts degree.

Swami Vivekananda’s college principal, William Hastie even wrote that Narendra (Swami Vivekananda) is a genius and that he has never came across a boy like him. He even said that Narendra is bound to make his mark in life. Swami Vivekananda can speed reading and be known for his extraordinary and vast memory which is why he was even called a shrutidhara, a person who has a prodigious memory.

Who is Swami Vivekananda?

Swami Vivekananda was a social reformer, a Hindu spiritual leader, an Indian Hindu monk, a philosopher, and a great thinker. He played an important role in introducing the Indian philosophies of Vedanta and Yoga to the Western world. He attempted to combine Indian spirituality with Western global. He even brought Hinduism to the level of a major world religion.

Swami Vivekananda later started visiting several countries and gave many lectures. He gave lectures for nearly two years after which he returned to India. He founded the Ramakrishna Mission on 1 May 1897 for the social service and welfare of the world. He constantly targeted teaching universal principles. Under this mission, he established many schools, colleges, and hospitals. His teachings motivated everyone. He turned into an extremely good orator and an English and Bengali writer.

“What is education? Is it book learning? No. Is it diverse knowledge? Not even that. The training by which the current and expression of will are brought under control and become fruitful is called education.”

“If education is identical with information, the libraries are the greatest sages in the world and encyclopedias are the Rishis.”

“Educate and raise the masses, and thus alone a nation is possible.”

“Education is the manifestation of the perfection already in man”

These are some of Swami Vivekananda’s quotes. Swami Vivekananda embraced education. According to him, education is incomplete without the teaching of aesthetics or fine arts. The knowledge of values and not of facts was his aim of education. He saw that education now only focused on scoring high marks so that students can become doctors, engineers, lawyers, or something else with the main goal being to earn as much money as possible. He wanted to re-introduce value-based education and imbibe human values in people. He said that education should cover all parts of life like physical, intellectual, material, emotional, moral, and spiritual. His teachings were based on Ramakrishna’s spiritual teachings of the Divine manifestations.

He preached philosophies, spiritualism, and principles of Vedanta. Swami Vivekananda was a great teacher. He promoted faith in Advaita Vedanta or non-dualism. He was taught and educated that service to living beings meant service to God. He believed that a person must discover himself or herself and when that happens, it will help them in the expansion and the enrichment of their soul. He also believes that knowledge is inherent in man and it already exists in the individual. One only has to discover it. He believed that education is a part of human life and that it helps create self-confidence and self-realization and that it makes an individual aware of their hidden powers. He stressed personal contact with the teacher and that without the teacher, there won’t be education.

According to Swami Vivekananda, the ultimate aims of education are: 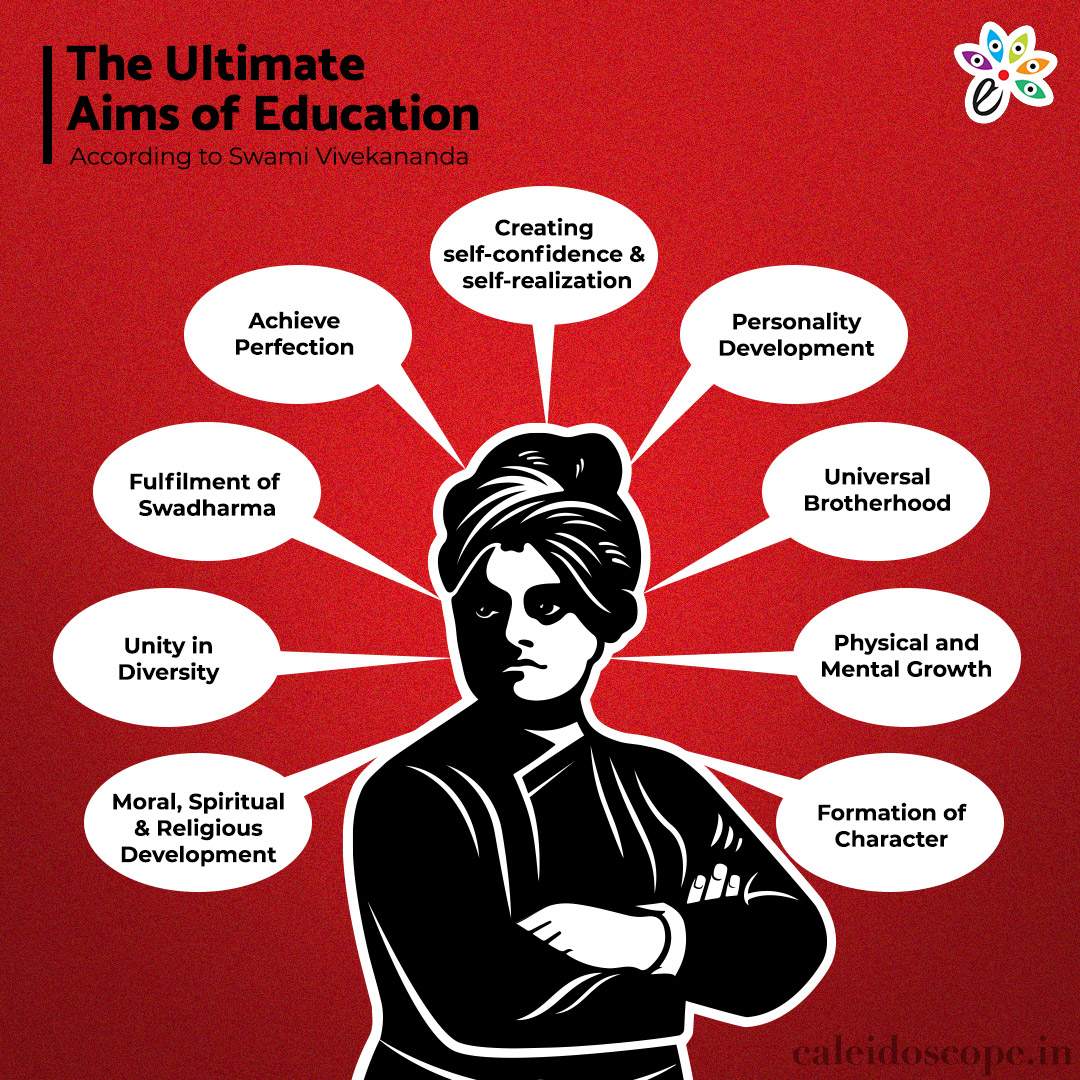 1. Achieve perfection – knowledge is already present in man, one has to discover it.

2. Fulfilment of Swadharma – to grow like yourself and not copy others.

3. Creating self-confidence and self-realization – one has many qualities within them but they are not conscious of it. Swami Vivekananda said that – “Faith in us and faith in God – this is the secret of greatness.”

“Wake up, rise, and do not stop till your aim of life is achieved.”

4. Unity in Diversity – individuals should develop this sense through education.

5. Formation of Character – “We want that education, by which character is formed, the strength of mind is increased, intellect is expanded and by which one can stand on one’s own feet.”

6. Personality Development – According to him, “Personality is two-third and his intellect and words are only one-third in making the real man.”

7. Physical and Mental Growth – education should aim at the physical and mental development of a child.

8. Moral, Spiritual and Religious Development – a nation’s and an individual’s greatness are possible only through these.

9. Universal Brotherhood – “Through education, we should gradually reach the idea of universal brotherhood by lining down the walls of separation and inequality. In every man, in every animal, however weak or miserable, great or small, resides the same omnipresent and omniscient soul. The difference is not in the soul, but a manifestation.” 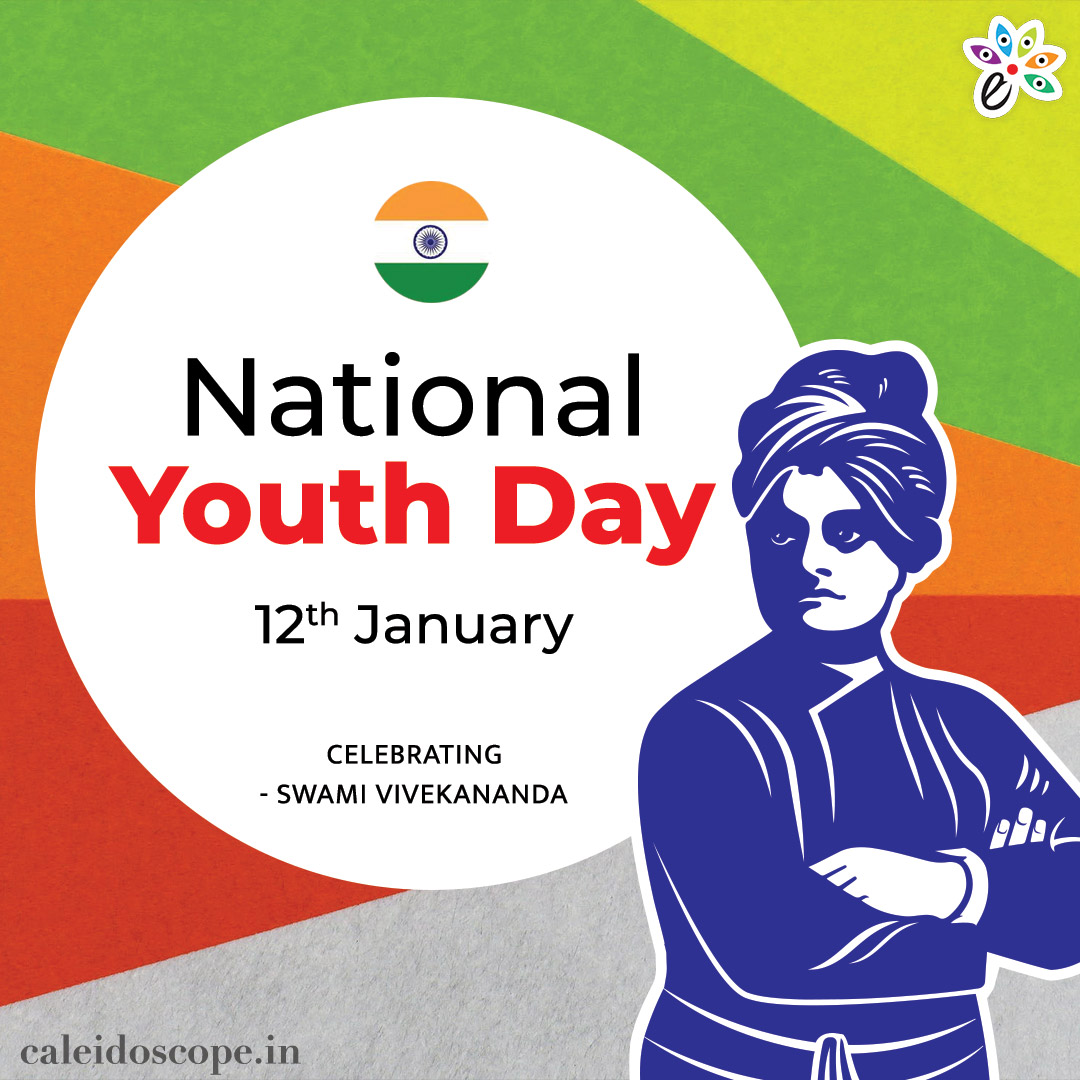 Every year, India celebrates National Youth Day on 12th January to pay tribute to Swami Vivekananda on his birth anniversary. He died on 4 July 1902, while doing meditation. 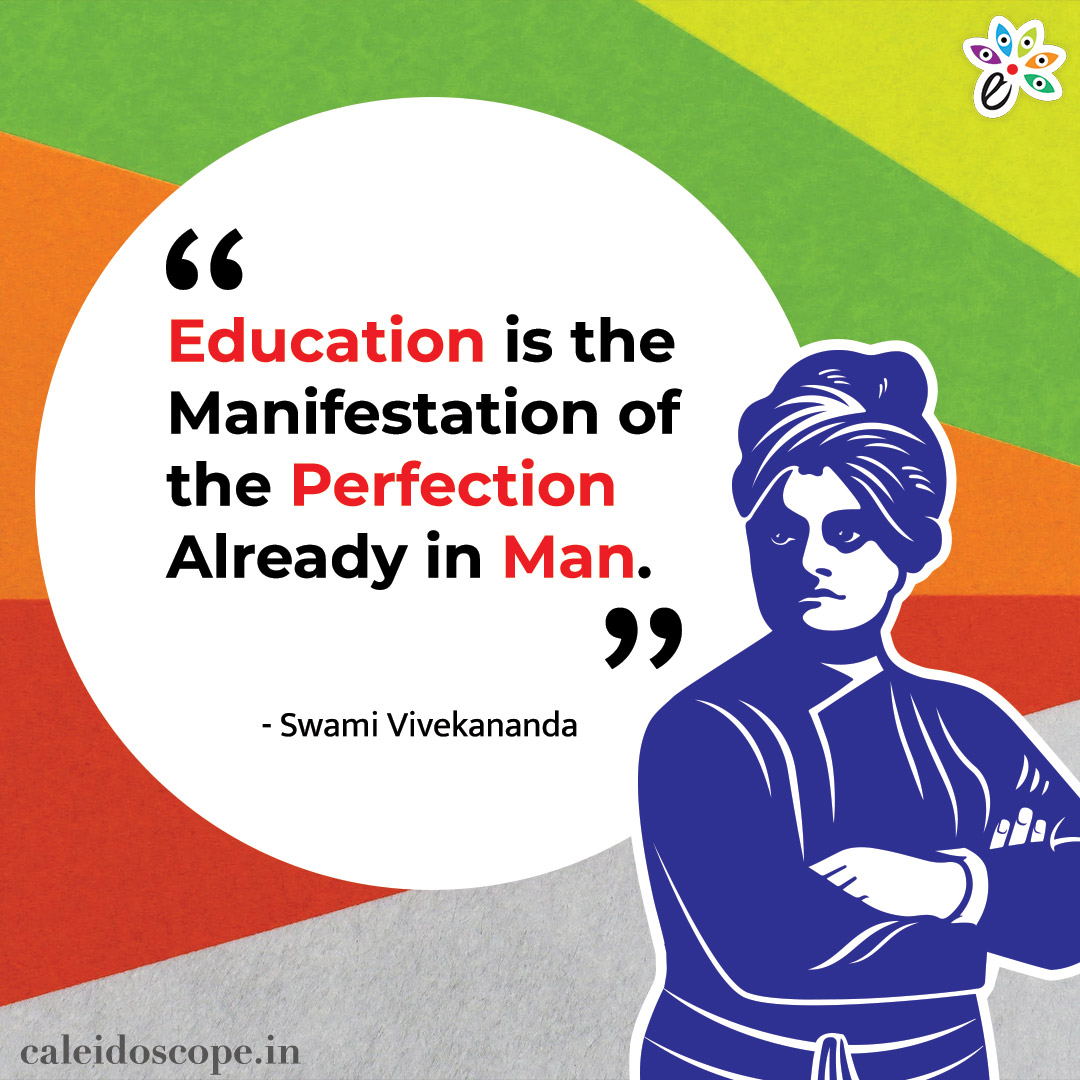 Education is the Manifestation of the Perfection Already in Man. 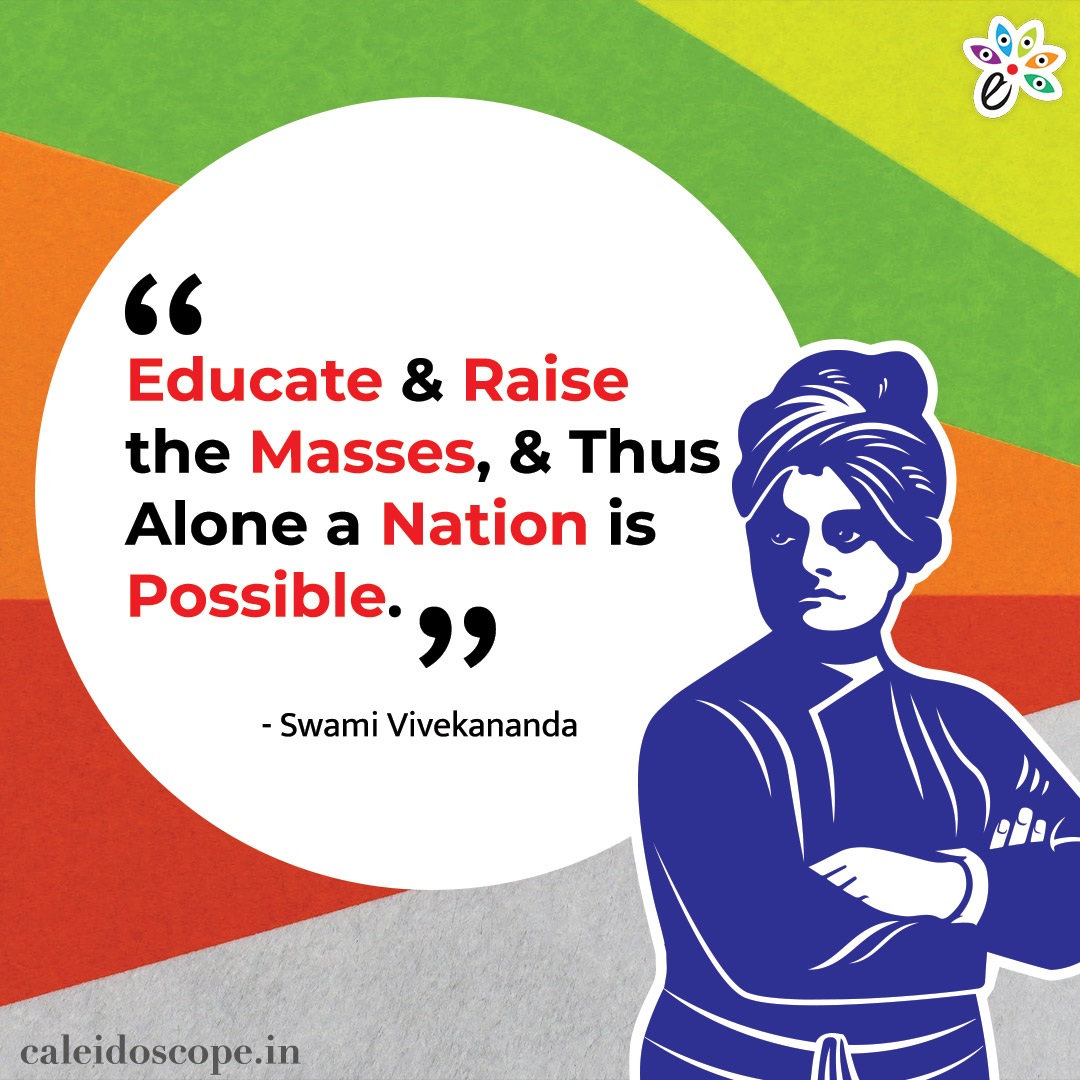 Educate & Raise the Masses, & Thus Alone a Nation is Possible. 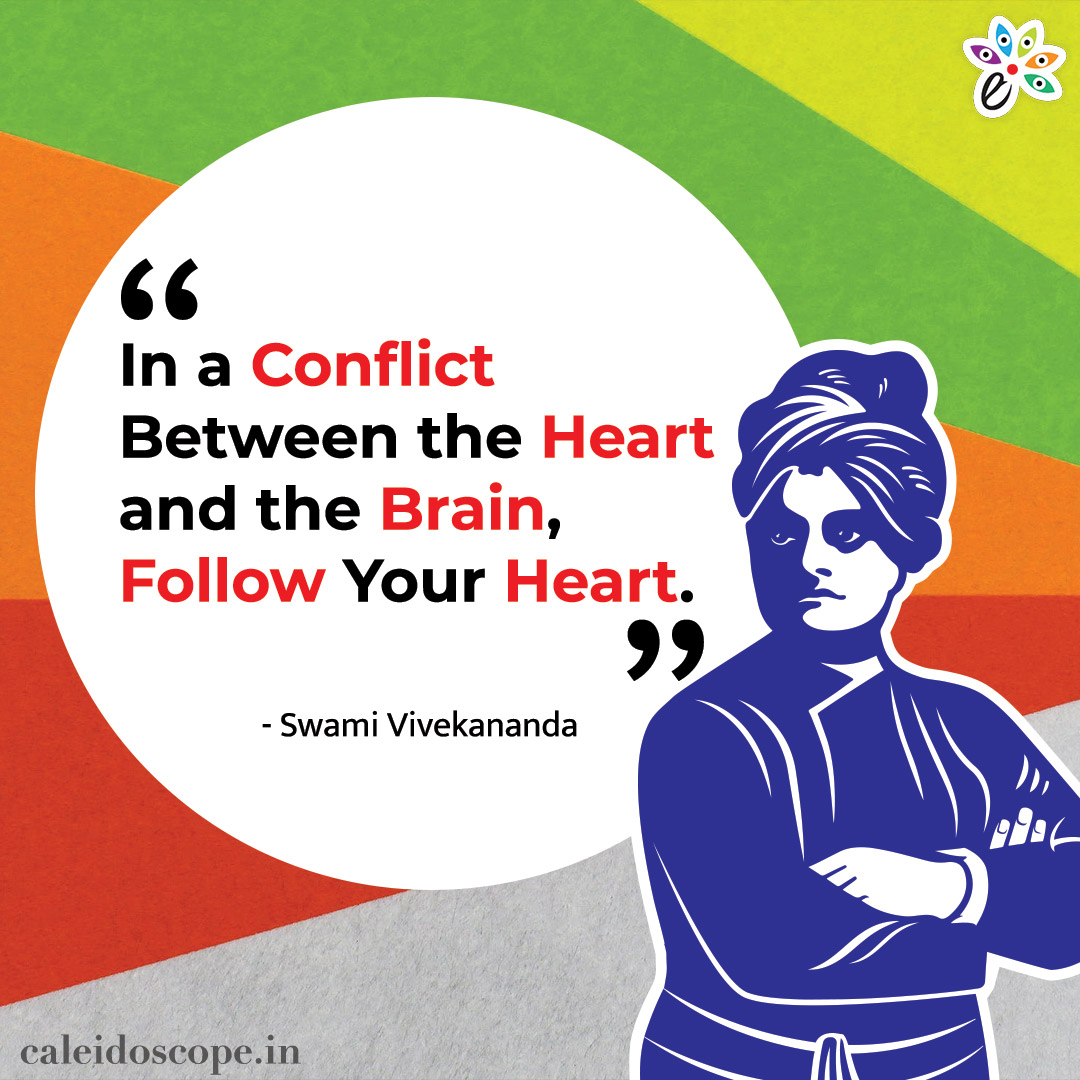 In a Conflict Between the Heart and the Brain, Follow Your Heart. 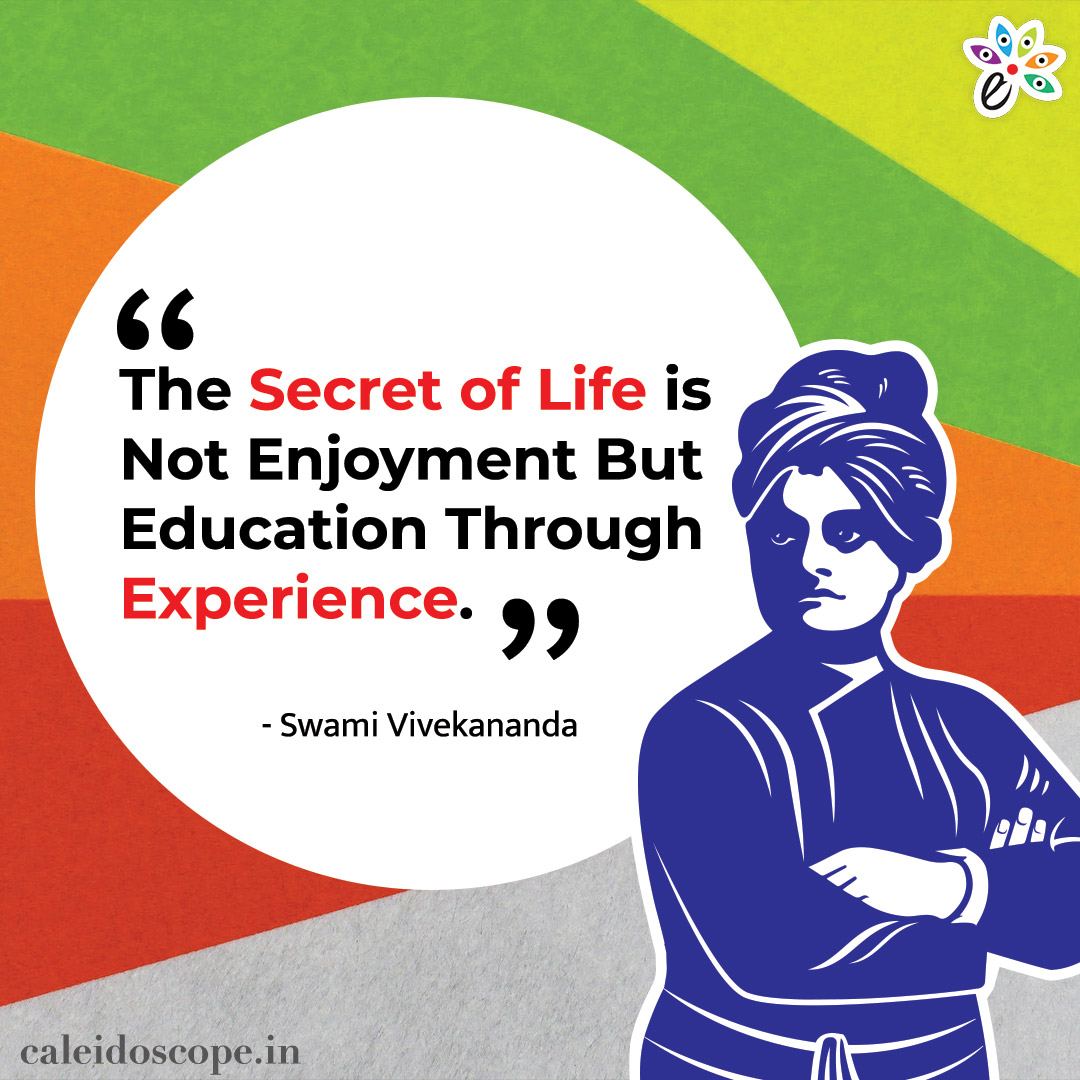 The Secret of Life is Not Enjoyment But Education Through Experience. 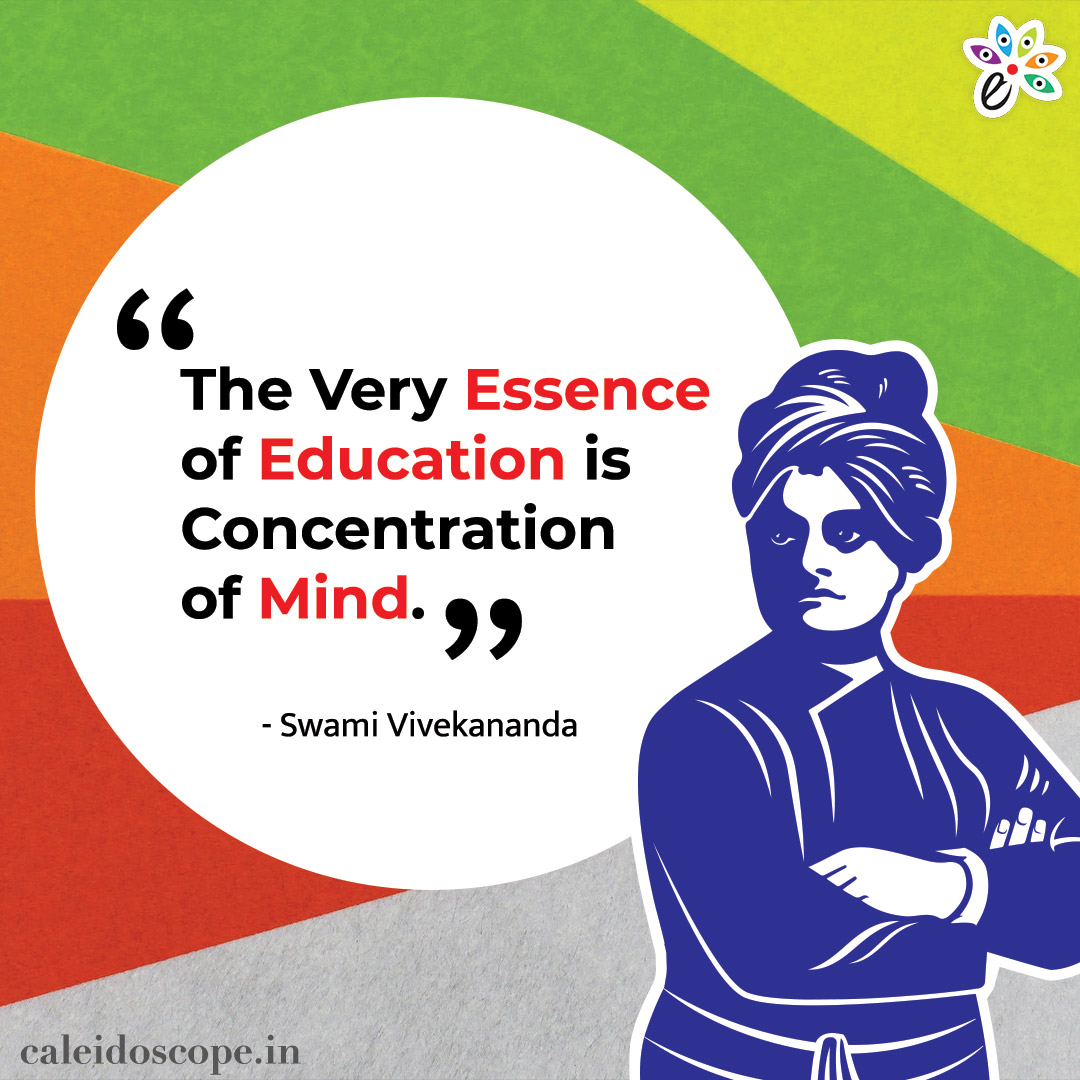 The Very Essence of Education is Concentration of Mind. 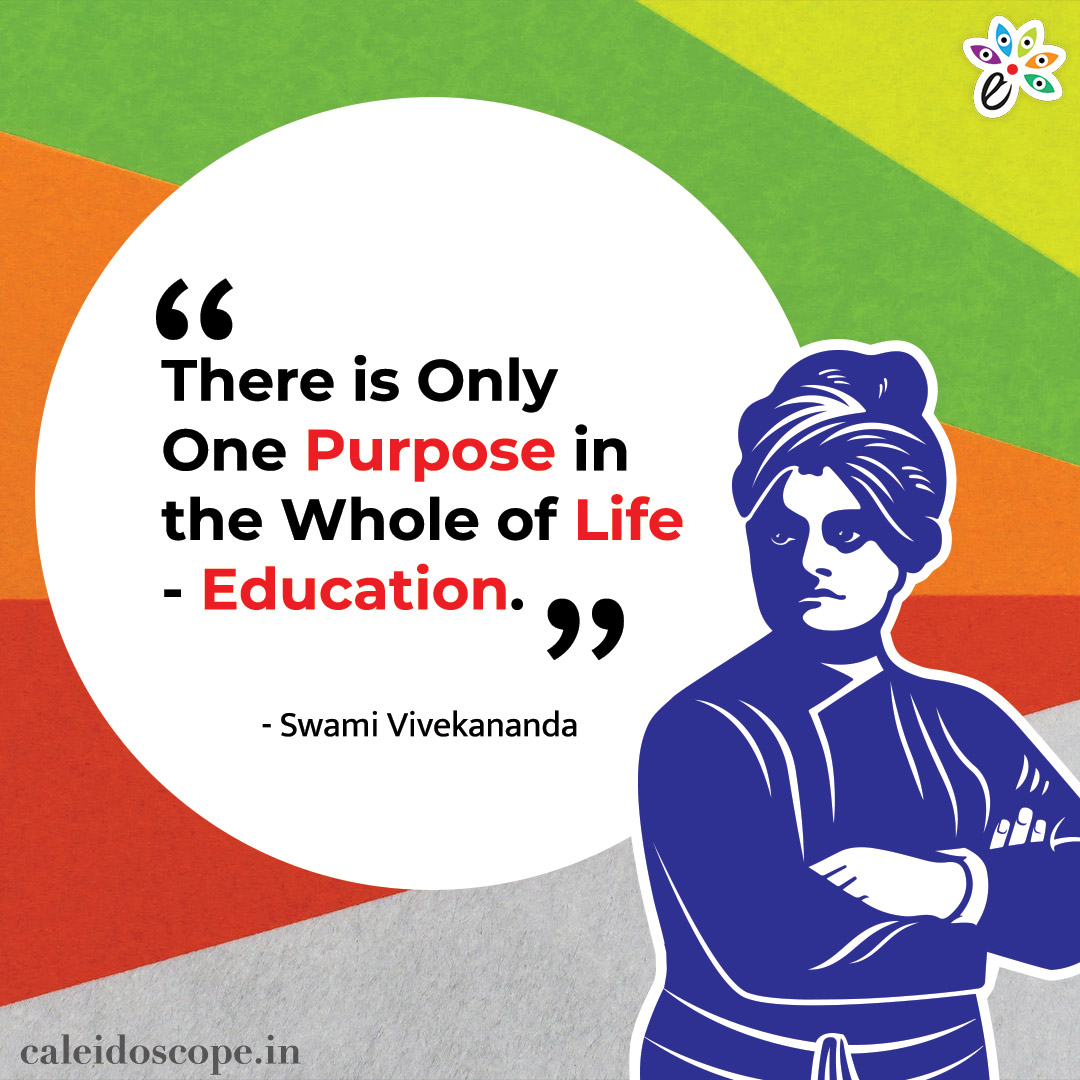 There is Only One Purpose in the Whole of Life – Education. 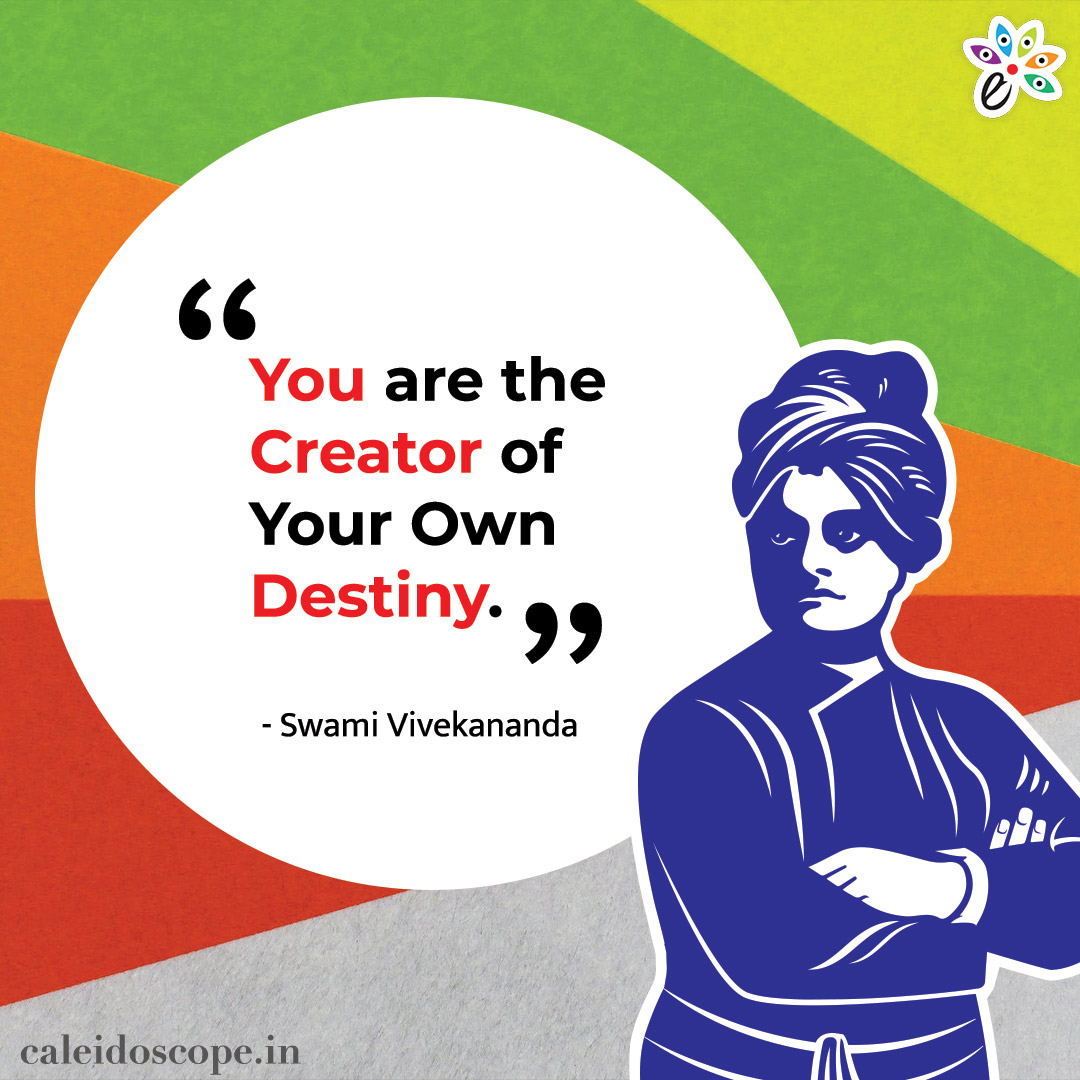 You are the Creator of Your Own Destiny! 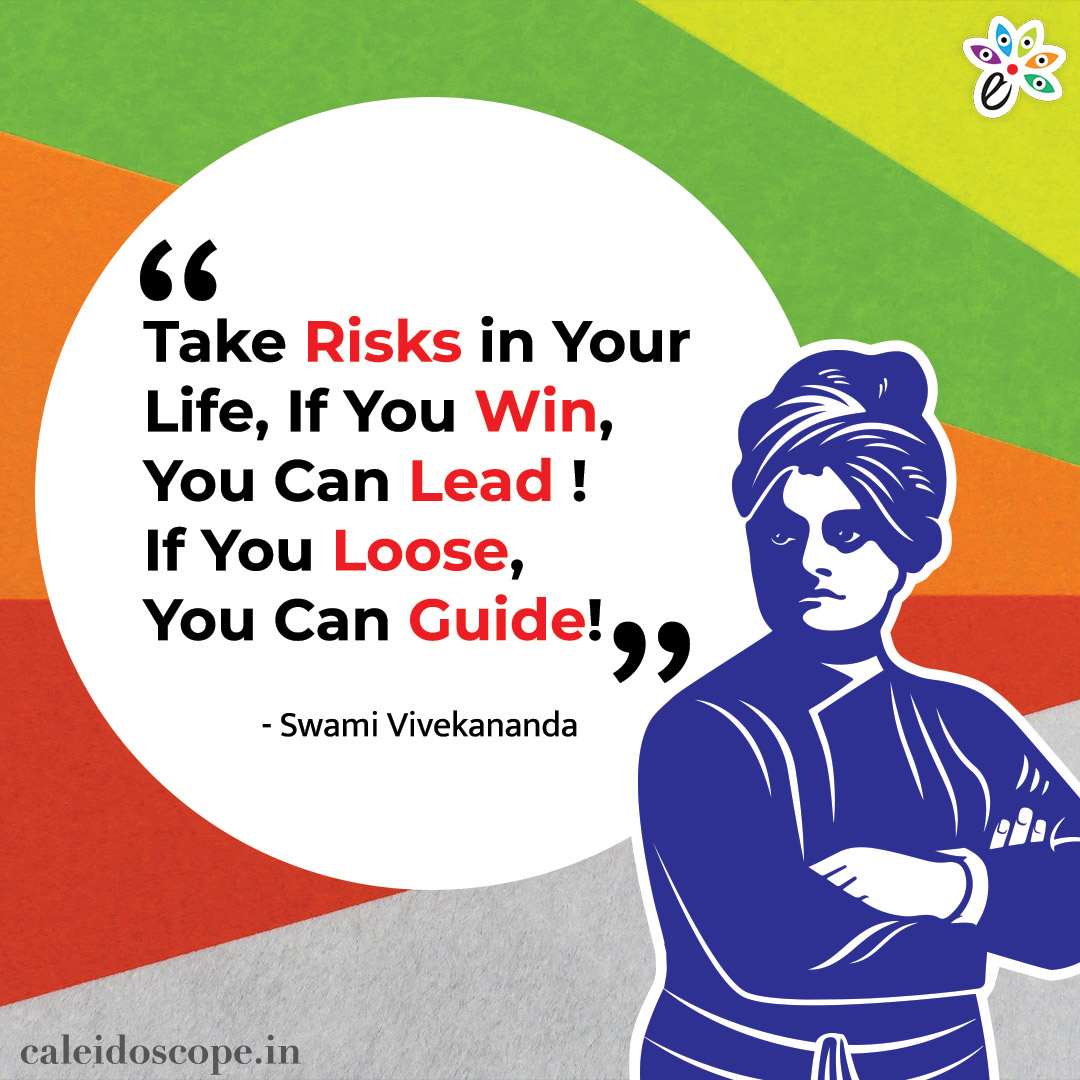 Take Risks in Your Life, If You Win, You Can Lead ! If You Loose, You Can Guide!