Cartoon characters are children’s best friends. They are full of expressions, antics and always have something up their sleeves. As a kid (a long time ago), I found solace and fun in some of my most favourite super heroes. Whether it was the different chases between Tom and Jerry or the sudden power and strength that overcame Popeye after eating spinach, these scenes are etched in memory. Not just for me, but for generations after me, who have glued themselves to the idiot box or flipped through our favourite comic books.

However, we all grew up to a staple dose of iconic cartoon characters that were mostly not geographically or culturally located in India. Yet, it is almost sinful to not remember our very own desi cartoon characters that touched our hearts and tugged at them just a tad bit longer. Chacha Chaudhary with his wit was one of my dearest characters, and so were the wonderful idiosyncrasies of characters from Tinkle. These characters resonated with us because they seemed pretty much surrounded in a milieu that was both familiar and relatable. Their way of talking, phrases, attires all reflected the cultural and social environment in which we survive. And hence, these cartoon characters formed the foundation for storytelling for many children growing up.

Also, the trend of introducing more and more Indian based characters and stories has heightened during the recent times. Several newer additions in the family of comics or television shows have increased the number of viewing or reading options for our children. Though not all match up to the status and standards set by erstwhile characters, some are extremely popular and a rage amongst the kids. Chhota Bheem, for example, has reached cult status and become the number one favourite of the children of today’s time. Yet, none of us has forgotten Mowgli (including Walt Disney Pictures) or Suppandi for sure.

And so compiling a list of some of the best cartoon characters was not too hard a task. However, though we recognize the characters themselves, we often forget the real heroes behind the scene. We forget the creators of these famous characters. The brilliant minds that give these cartoons on paper a voice and a face. Let’s take a look at the most popular Indian cartoon characters and their creators, exploring a little more about each of them. 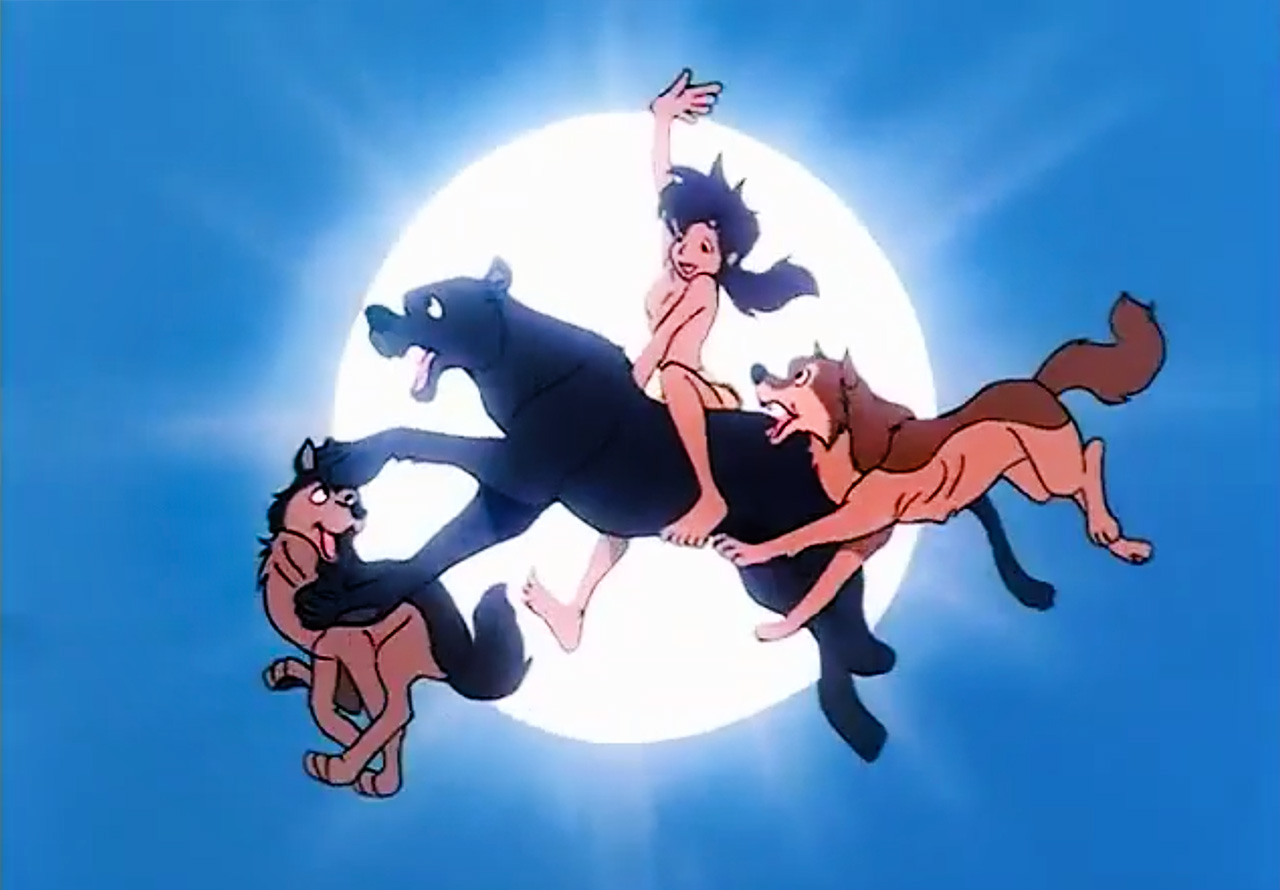 The Jungle Book is one of the defining stories of our times. Originally a book it has been adapted into films and cartoon series as well. The protagonist Mowgli is a household name, and with Rudyard Kipling’s brilliance, all characters and storyline have had many side stories, spin-offs etc. Whether it be the various movies or multiple adaptations, the adventures of Mowgli, Bagheera and Bhalu don’t ever disappoint.

And yes of course, for those growing up in the ’90s, ‘Jungle Jungle baat chali hai pata chala hai…’ will always be a song remembered till eternity.

Created by Pran Kumar Sharma or fondly known as Pran, Chacha Chaudhary first came into being in 1971. The comic first ran for Lotpot a Hindi magazine and became immensely popular in no time. Chacha Chaudhary is a petite old man whose ‘brain works faster than a computer’. Along with the massive alien from Jupiter called Sabu, Chacha Chaudhary manages to solve mysteries and cases with his acute intelligence. The household consists of his wife or Chachi, Sabu and his faithful dog Rocket. Chachaji in his turban and wooden stick is the quintessential wise old man. Similarly, Chachiji with her ‘belan’ and polka-dotted sari reflects a middle-class home that might be changing fast in these modern times but is nonetheless nostalgic and recognizable.

Pran is one of the best known Indian cartoonists of India. He has created various other cartoon characters, such as Billoo, Pinki, Shrimatiji and more. Awarded the Padma Shri posthumously, Pran’s contribution to Indian cartoons and caricatures is profound.

The Suppandi stories or comics appear in the Tinkle comics. Suppandi was not originally planned or conceptualized by the Tinkle magazine creators. He was, however, introduced by narratives sent over by P. Varadarajan. The concept was then taken on in a comic style and format by Ram Waeerkar. The character is a faithful servant, albeit stupid and extremely naïve. His meddling ways and lack of intelligence lead to hilarious situations that can leave one in splits.

Ram Waeerkar is a comic artist for the Amar Chitra Katha series. Some of the other characters that he gave life to included Nasruddin Hodja, Pyarelal and more. 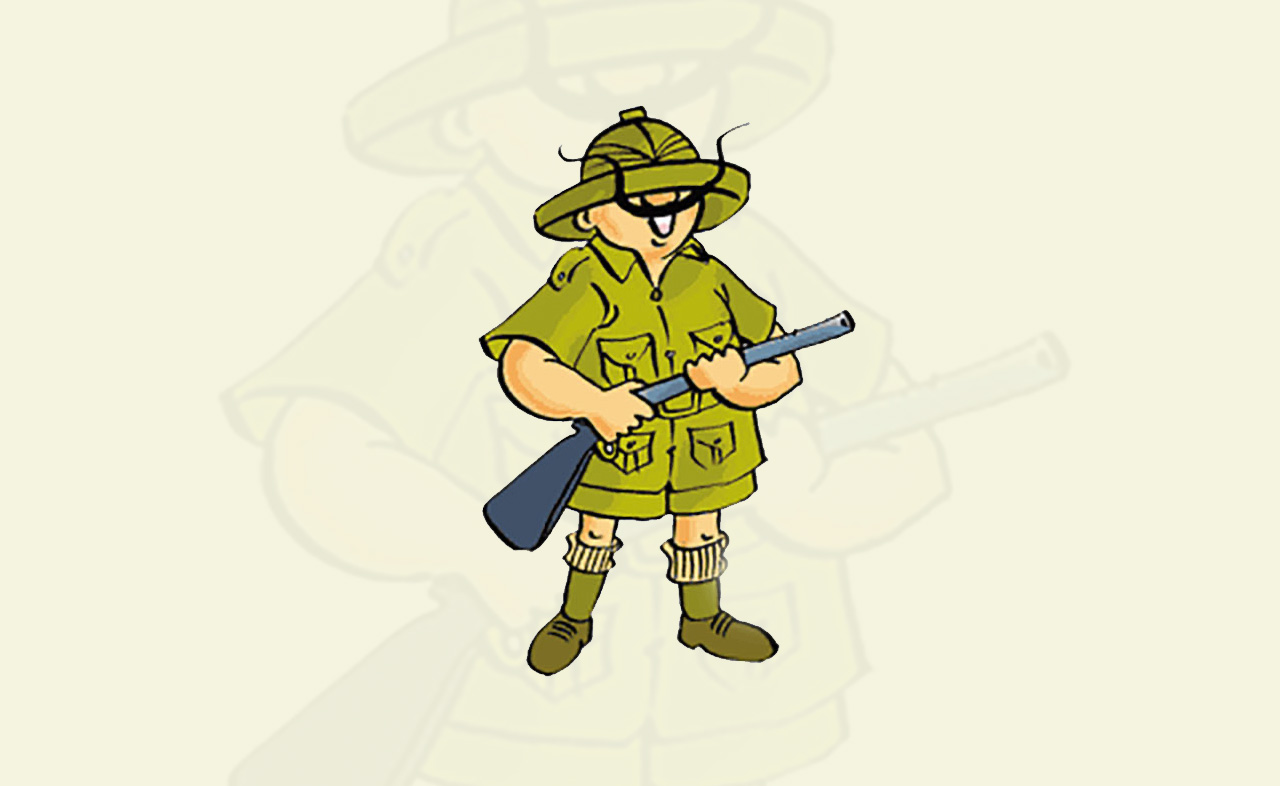 Created by Vasant Halbe and Luis Fernandes in 1982, Shikari Shambu is an Indian hunter that features in Tinkle. Characterized as lazy, Shikari Shambu somehow manages to impress himself upon others as a courageous and brave hunter. His escapades are usually achieved with pure luck. Dressed as a typical hunter with his trademark moustaches, Shikari Shambu is a much-loved character from the Tinkle comics. 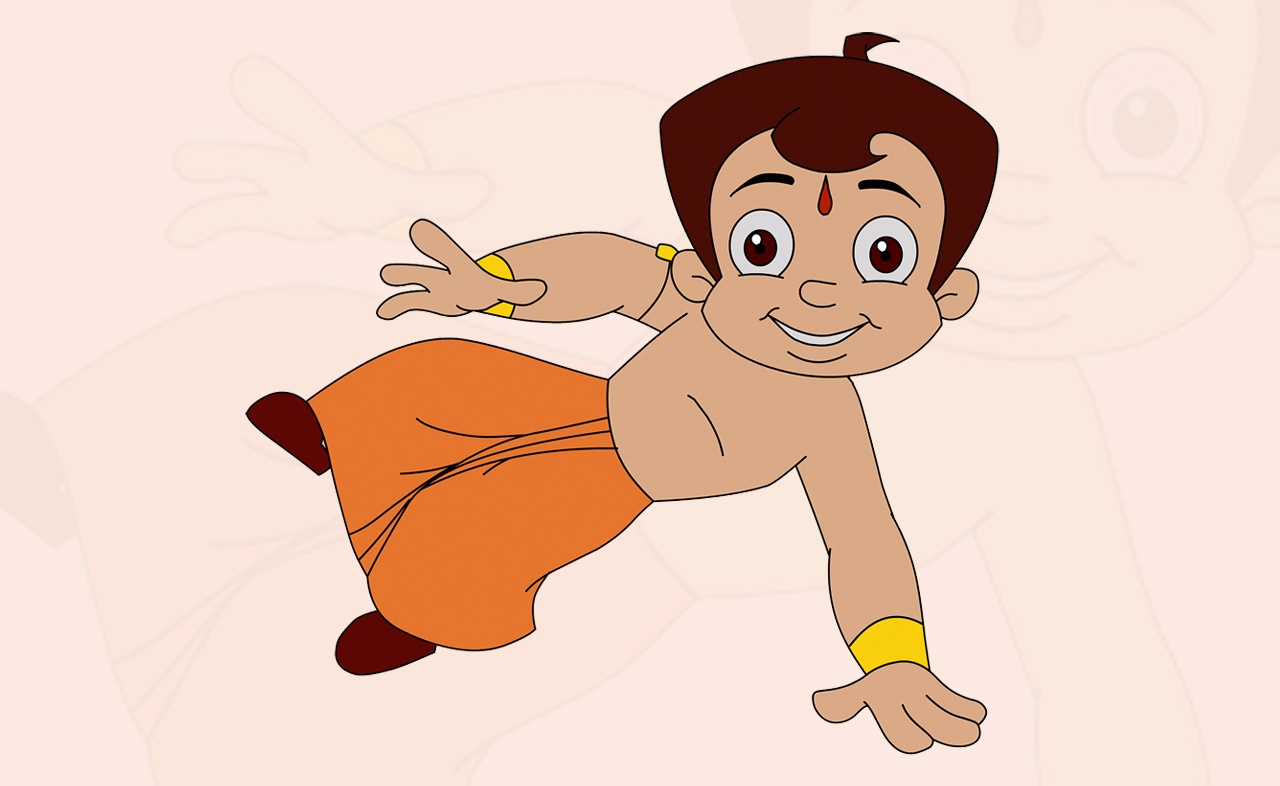 Unlike the earlier characters that are parts of comics, Chhota Bheem is an animated television show. Chhota Bheem a strong and courageous boy can show stars to his opponents after gulping down a laddoo. He, along with his friends from Dholakpur village, is a bunch of kids who play and do the right thing by protecting the innocent. The village setting, their attires and the different characters that are part of the series exude the typical aura of rural India. Also, the plots are underlined with folklore and magical tales keeping children on the edge and excited.

Rajiv Chilaka is the maker of Chhota Bheem and also the CEO and founder of Green Gold Animations. His other cartoons include the Krishna series as well. 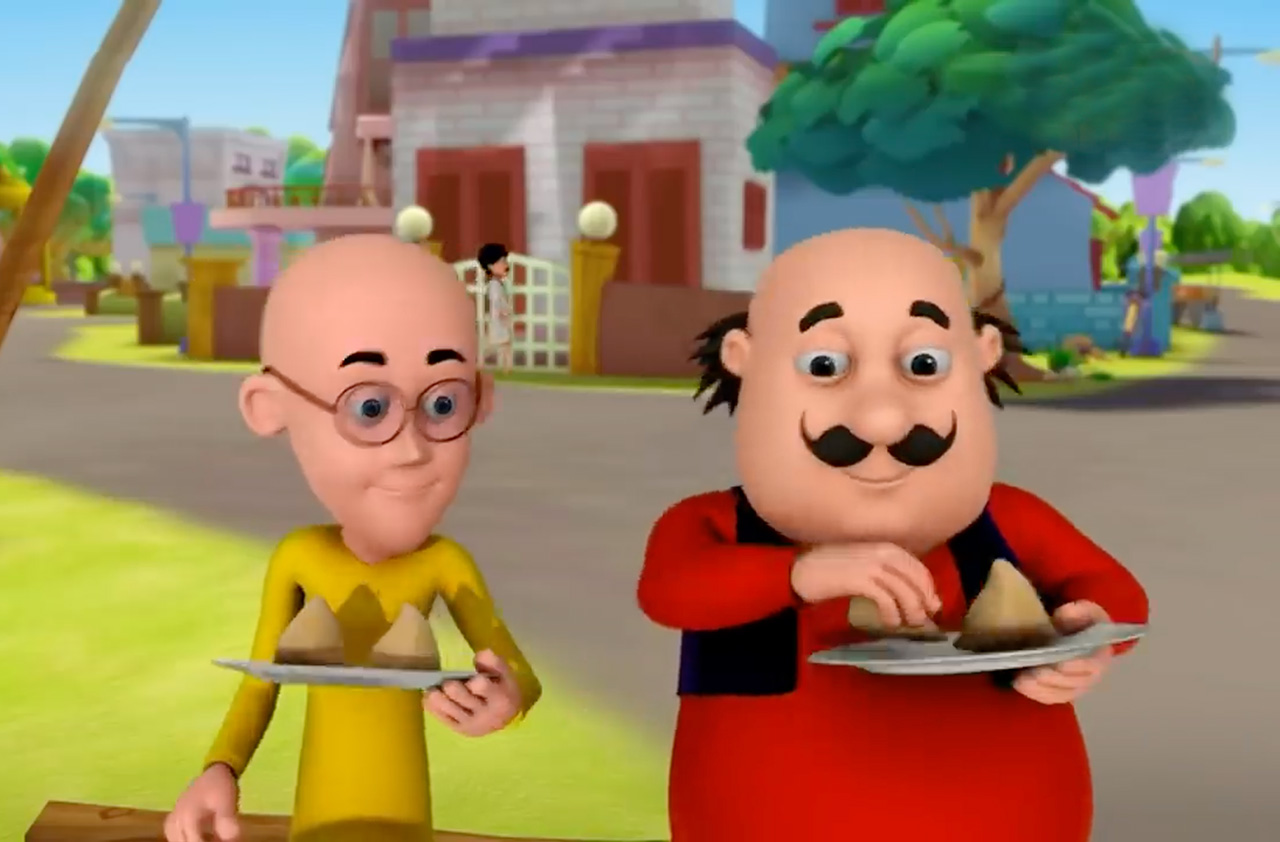 Another animated series on television, Motu Patlu is also an adaptation from the comic Lotpot. Motu is plump, whereas Patlu is his thin friend. A loose spin-off from Laurel and Hardy, the comics and the series focus on the various mishaps in their lives. The original creator of the characters was Kripa Shankar Bharadwaj. After him most of the series was created by Harvinder Mankkar.

Kripa Shankar Bharadwaj is regarded as a great cartoonist of India. 70% of the characters in the Lotpot series have been created by him. 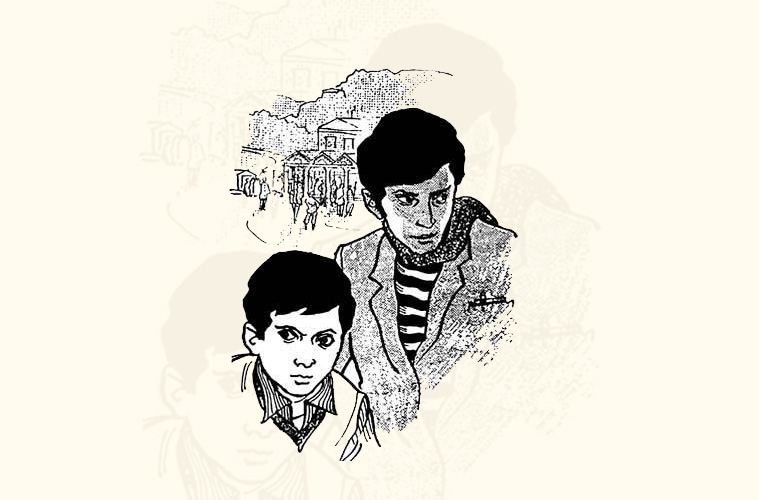 Not exactly a cartoon character, Feluda is a fictional detective character. Based along the lines of Sherlock Holmes, he is often assisted by his cousin Topshe on various investigative cases. Feluda stars in a series of novels and short stories in Bengali and is one of the most popular fictional characters in West Bengal. Created by Satyajit Ray, the master storyteller, the Feluda series has been adapted on various mediums, including in films, television, animations and radio.

We often relegate cartoon characters to being entertainment sources for children. Yet, cartoons have often transcended from mere childish gimmicks to serious conversational and opinionated mediums. RK Laxman’s Common Man is a classic example of how a simple cartoon character became a representation for the aspirations, hopes and commentaries of the common man of those times. Amul’s ‘Girl’ cartoon often speaks her mind through witty lines that are a sharp satire or an analysis of current situations or incidents.

Cartoon Characters Not Just for Kids!

Controversial cartoons have got people in trouble, whether it be political jabs or religious sentiments. And hence, cartoons like all forms of artistic expressions should not be seen only as tools to create animated content for young ones. But also, as a mode of expression that can reach and impact an audience with limited words or punch lines and caricatures.

Finally, fiction is often closer to reality. Through animations and comics, stories and characters that are fictional unfold and bring to the surface the touching realities of our lives. Every character brings with them their typical personality. There are real emotions that are laden under the façade of drawings or graphics. The stories and character graphs of each of these fictional characters are also important because they are often a larger extension than of just themselves. It is not just Chacha Chaudhary that we see solving a case.

We see an old wise uncle in our family or a dear neighbour who exhibits the same acumen. We laugh over Supandi and Shikari Shambu’s tales, but we relate to their confusions and stupidity readily. Don’t we wish to escape and lunge on trees like Mowgli and feel the raw fear in times of distress? We understand the bonds of friendships through Chhota Bheem’s gang, and we are reminded of our neighbourhood friends with whom we love to spend our evenings. Yes, there is a bit of ourselves in each of these characters and their culture and social rootedness makes them fond members of our growing up years. And in the midst of all of it, we hope not to forget the genius and artistry of those who created them!