Junagadh – Walk Into an Abandoned History

My wanderings across Gujarat brought me to a small town in Saurashtra region, Junagadh. Entering the town, I got a feeling this is a place that somehow seems to dwell in its past. The name ‘Junagadh’ comes from the words ‘juna’ and ‘gadh’ (meaning old fort) and all that is old about Junagadh greets you, somehow undermining all efforts of modernization. A visitor is tempted to live off the history that every turn in every street offers in this town in south western Gujarat.

The history of Junagadh can be traced back to 250 BC, and when you drive into this sleepy town, it belies the turbulence of being through 16 sieges over 800 years. Before acceding to Indian rule, the last rulers of Junagadh were the Nawabs of Babi Dynasty (1749 – 1949 AD). Ruled by the Nawabs, Junagadh was a princely state during the time the British Raj and acceded to become a part of Pakistan during the early days of independence. However, given that the population of Junagadh province was 96% Hindu and owing to the state not being geographically contiguous to Pakistan, India intervened on the pretext of communal tension and cut off all economic and communication channels.

In October 1947, the last ruler, Nawab Muhammed Mahabat Khanji III fled to Pakistan just before the Indian troops moved in the take over the state. In November 1947, the Dewan of Junagadh (chief minister), Sir Shah Nawaz Bhutto invited the Indian government to accede. Coincidentally, the Dewan was the father of Zulfikar Ali Bhutto, who became the prime minister of Pakistan.

Today, Junagadh stands testimony to all its history preserved in architecture, which tries to blend in with the hustle of a small city trying to come into the fold of modern India. Most of the architecture you’ll see is from the last two centuries; the most notable are the tombs of the Babi Nawabs. While these aren’t very well maintained and you will often find dilapidated interiors, they still by no means have lost their grandeur. The sunset with the silhouette of the famous Mahabat Maqbara, built on the grave of the Nawab Mahabat Khan II is a splendid sight. Adjacent to the Maqbara is the Jammi Mosjid, which is a beautiful piece of architecture, but has seen much renovation in recent years and seems to have lost its old world charm. Then there is the Junagadh Palace, Durbar Hall Museum as well as other remnants of an illustrious past strewn about the town such as the clock tower.

However, the oldest part of Junagadh and possibly the chief contributor to its name is the Uperkot fort, or the upper citadel. Over 2300 years old, this is the most significant piece of Junagadh’s history. Chandragupta Maurya of the Mauryan dynasty originally built the fort in 319 BC, which remained in use until the 6th century. After being rediscovered, its subsequent rulers made several additions to the Uperkot Fort. In the 11th Century, the Solankis of the Chalukya dynasty commissioned two large step-wells: Adi Kadi Vav and Navghan Kuwo. Adi-Kadi Vav is a man made canyon carved out of rocks, is around 81 meter long, 4.75 meter wide and around 41 m deep. There were no ornamental designs, but the rock stratum along the side walls gave it stunning looks.

Uperkot is steeped with history, folklore and a confluence of diverse religions that existed in Junagadh. Hindu temples dedicated to Ganesh, Hanuman and Shakti mark the entrance to Uperkot. The most prominent structure is the Jama Masjid, which was originally the queen’s palace of Rani Ranakdevi. The palace was converted to a mosque when Sultan Muhammed Begada conquered Junagadh in 1473 AD. 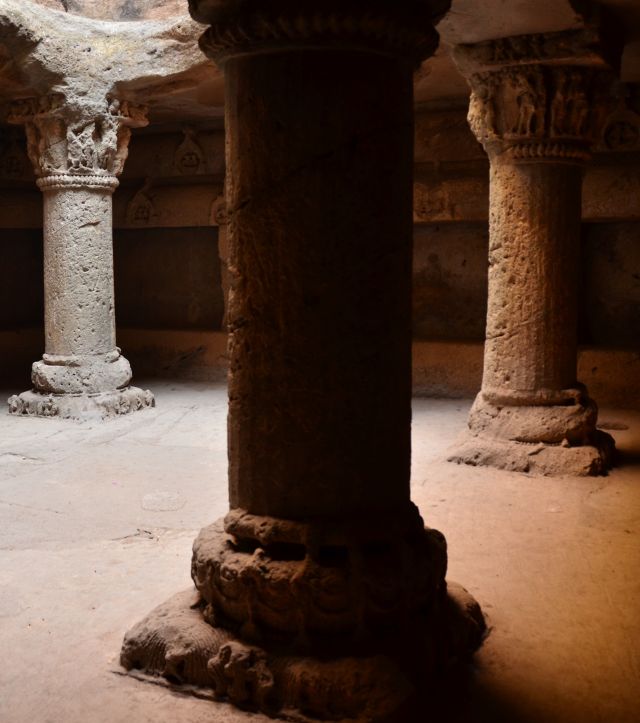 In the same complex are the Buddhist caves, which date back to 2,000 years. These caves were carved during the reign of Emperor Ashok and are believed to be among the oldest monastic settlements in Gujarat. These caves seem to be monastic quarters mostly bare, with an earthy feel and some carvings in pillars, which still remain. There are interesting Ashokan rock edicts located on the way to Girnar hills dating back to 250 BC. The biggest edict is a huge rock with carvings in Brahmi script describing the rule of Emperor Ashok.

There is so much to explore in Uperkot. Besides the architecture, what really brings the monuments to life is the folklore associated with each of them. The large metal canons (Neelam and Manek) tell tales of battles fought against the Portuguese with Turkish help. The step-wells tell tales of sacrifice by two sisters, Adi and Kadi after whom the well is named, such that water would sprout from the earth. In Junagadh, there is a sense of time slowing down. Here, the folklores live on, well beyond the lips of the tourist guides, and somewhat in its centuries old buildings, the rocks seem to whisper to each travelling ear, if only you would stop and listen! 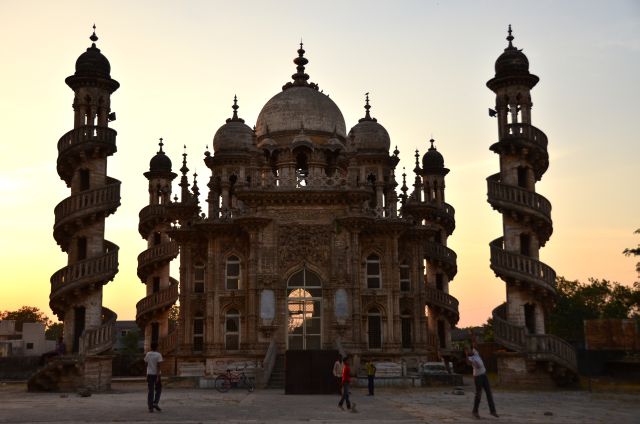