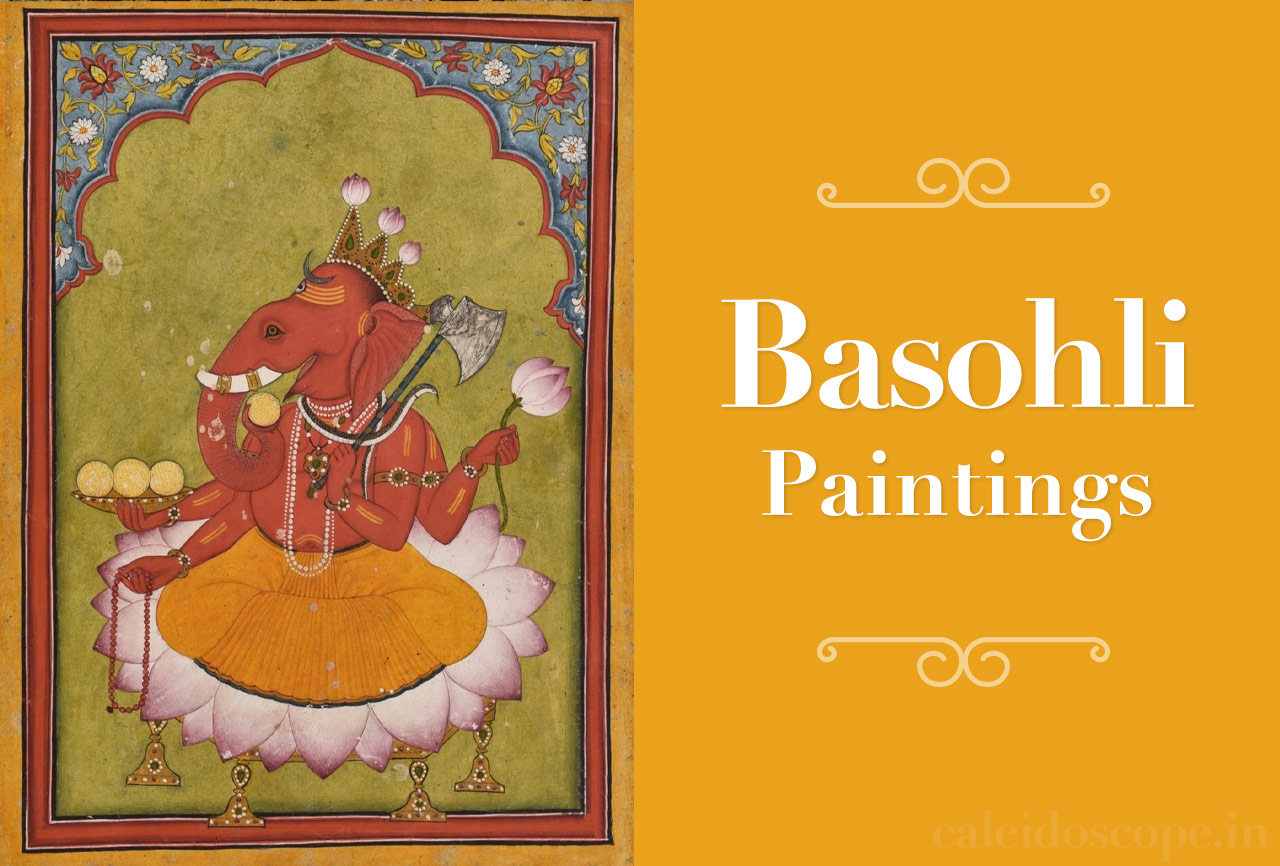 #Didyouknow that Basohli painting, a School of Pahari miniature painting which flourished in the Indian hill states, in sub-Himalayan India during the late 17th and the 18th centuries, is known for its bold colours and vitality? The school takes its name from the small independent state of Basohli. Where exactly is Basohli? It is in a town near Kathua in the Kathua district in the union territories of Jammu and Kashmir, India. Its original name is Vishwasthali and was founded by Raja Bhupat Pal from the Biloria clan of Chandravamshi Rajputs, in 1635. Its past glory can be gleaned from its ruined forts and palaces and its splendorous paintings created by artists in the ateliers of the rulers or even at village homes of artists and brought to the patrons for purchase. It is nestled on the right bank of the river Ravi. Basohli is naturally beautiful with mountainscapes and greenery located amidst the Shivalik hills. There are villages on hillsides, meadows and trees such as pines among others. Basohli paintings are considered the first School of Pahari paintings, which evolved into the Kangra paintings school by mid-eighteenth century. Most of the Hill states were ruled by Rajput rajas or kings who were vassals to the Mughals which influenced the art styles and architecture of the state.

Basohli paintings display a wide range of subjects. Starting with Hindu deities, the school goes on to paint illustrations to texts like the Bhagavata Purana, Gita Govinda, Rasikpriya and Rasamanajari. The Basohli

School of painting flourished under royal patronage. It flowered under Raja Kirpal Pal (r. 1678-1695), a patron of arts and learning, who had an atelier and was fascinated with illuminated manuscripts. Many Basohli paintings have beetle wings to depict emeralds in jewellery and also gold work on them which makes them glow. He had commissioned a Rasamanjari set in circa 1695 executed by artist Devidasa. However, there are sets prior to 1680; a Tantric Devi series, a set of Nayikas, a group of illustrations of Rasamanjari as well. The earlier paintings were most probably made during Raja Sangram Pal’s (r.1635-73, grandfather of Raja Kirpal Pal, son of Bhupat Pal) period by individual artists. There might have been a Kashmiri painter at Basohli with knowledge of Nepali techniques because some early artworks show Nepali influence. The influence of wood sculpting is also seen because the atelier had sculptors.

The son of Raja Kirpal Pal, Raja Dhiraj Pal (r. 1695 – 1725) kept the School alive. It is conjectured that a Bhagavata series done in horizontal mode, of Mankot was actually made by his atelier. Between 1707 and 1710 a set of Ragamalas were made, a Ramayana dated to 1720 is from his rule. Few portraits were also executed. His son Raja Medini Pal (r. 1725-36) commissioned the famous Gita Govinda of 1730. His son was Raja Amrit Pal (r. 1757-1776). Thus, we see that the illustrations to famous texts, portraits of rulers, battling elephants, Ragamala paintings, the school has it all in bold vibrant hues and illumination as well. Basohli painting has a typical facial geometry and stood out as unique in the 17th century. The artworks have red borders within which the picture is depicted.
Basohli style uses strong colours, and deep-set facial patterns. The faces have large graceful eyes. The paintings use bright colours with yellowish-brown, yellow, brown and green grounds, Takri script is on the top and serial numbers on top left. On the back of these paintings Sanskrit verses may be inscribed in Devanagri. The architecture reveals pavilions, doors with panels, latticed windows and plinths. Women are with a receding forehead, well defined nose and wide eyes. Stone colours, brushes of squirrel hair, and hand-made papers were used for the artwork. The feathers of Kalmunha bird and colours from leaves, flowers, beetle wings and khadiya earth besides gold and silver are known to be used as well to great effect in Basohli paintings. Let us look at the subjects painted and see some images from this vibrant School of Indian painting!

Art Historian Martin-Dubost, Paul says about this painting at National Museum, New Delhi of Lord Ganesha sourced from his work Ganesa: The Enchanter of the Three Worlds…”Attired in an orange dhoti, his body is enitirely red. On the three points of his tiny crown, budding lotuses have been fixed. Gaṇeśa holds in his two right hands the rosary and a cup filled with three modakas (a fourth substituted by the curving trunk is just about to be tasted). In his two left hands, Ganesa holds a large lotus above and an axe below, with its handle leaning against his shoulder. In the Mudgalapurāṇa (VII, 70), in order to kill the demon of egotism (Mamāsura) who had attacked him, Gaṇeśa Vighnarāja throws his lotus at him. Unable to bear the fragrance of the divine flower, the demon surrenders to Gaṇeśa.”

A painting at The Met, New York of Radha and Krishna along with a sakhi or companion is depicting a discussion between them in a verdant space in Vrindavan. Radha is in rapt attention and the sakhi is making a point as well, Krishna seems to be having the final word. Krishna is wearing his pitambar garment of yellow and Radha is dressed in a blue diaphanous odhni and a red ghagra. It is an illustration from the Gita Govinda of Jayadeva Goswami written in the 12th century.

The painting of Sanveri ragini, a melody in Indian classical music depicts a royal woman dressed in finery seated on a silver throne in a grove. There is a falcon on her left hand which may be her pet bird or symbolic of royalty.

This painting of Pradyumna and Mayavati flying from The Cleveland Museum of Art depicts a scene from the Bhagavata Purana which relates to Lord Krishna’s life.

The painting of two fighting elephants from the collection at LACMA, USA, captures the intensity of the combat with the mahouts speaking animatedly and the onlookers enthralled and participating in the event.

Indrakshi Seated on a Lotus Flower

An illuminated painting from the Tantrik Devi series depicting Indrakshi, being adored by the Hindu Trinity of Gods, Lord Brahma, Vishnu and Shiva. The artwork has used gold, silver and beetle-wing cases on paper.

The painting Akura rides towards Dwaraka from the 17th century at The Cleveland Museum of Art depicts a scene from the Bhagavata Purana which relates to Lord Krishna’s life.

Kalki is the tenth and final incarnation of Hindu God Vishnu who will end the Kali Yuga, one of the four periods in the endless cycle of existence. The painting from The Met, New York depicts the avatar seated on a silver throne with his sword and an attendant bringing his white horse in which he will arrive.

Rasamanjari is a text in Sanskrit verse composed by Bhanudatta from the 17th century. It is about the many aspects of love. Bhanudatta in his poetry had depicted the social life of that era, especially the elite and depicted couples as Nayaks and Nayikas. The text has been well illustrated by many Schools of Indian painting, especially Basohli. Basohli style Rasamanjari paintings hold a special place in the history of Indian painting. Kripal, his son Devidasa and grandson Golu were the main artists of the illustrations. Here we see two paintings, one of Shiva and Parvati playing a game of chaupar and one where Radha is upset with Krishna. Shiva and Parvati, Radha and Krishna have been envisaged as nayak and nayika by the poet.

The Basohli School is a pioneering school in the Pahari genre of painting and will continue to enthrall be treasured by art lovers and scholars for its ability to engage the viewer with it powerful depictions and colourful images.