The Funky Side of Auto Rickshaws 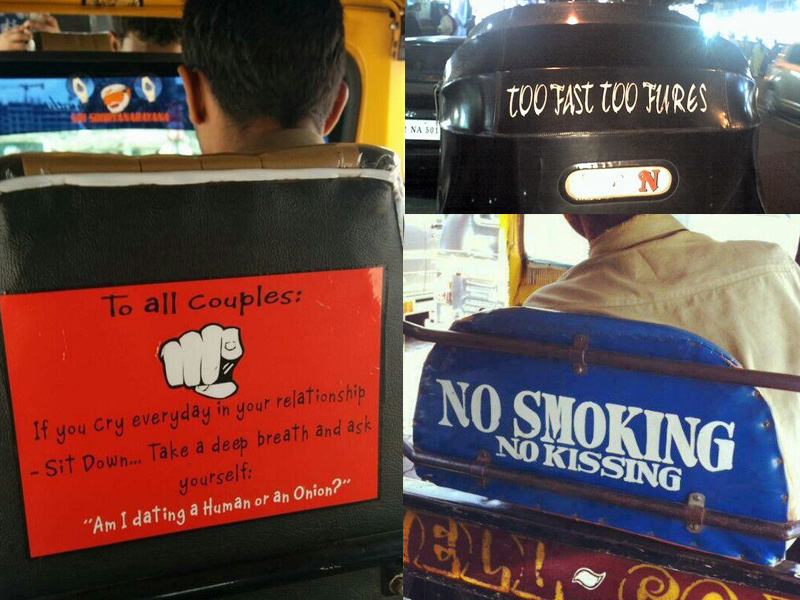 Ever been into a Ganesh? Wondering what Ganesh is? It’s just another name for the cute little three wheeler called ‘auto’. Auto rickshaws have developed over the years but haven’t changed a bit. From noisy and polluting Ganesh to nature loving CNG driven tuk tuk; they still look like a small tricycle with covered-seats, and are now a major part of Delhi transport. These small yellow coloured vehicles are like bees which are desperate to take you all around the city! Their population is increasing so rapidly that in the coming years’ people will start breathing auto rickshaws with oxygen! I mean, they are just everywhere! They have become a part of our culture and life. Today, the second most occupied thing you find here after fashionable college girls is an auto rickshaw; they can be found in every corner of the city.

They are adorable, fast and embellished with funky stuff which make them appealing, and I don’t mind taking a ride in a desi disco in motion with loud Bhojpuri and item songs. Their colourful hanging decorations, pictures of Bollywood stars on the upper line of windshield and seats, makes them even more attractive.

Despite having a usual capacity of six, autowala bhaiya can adjust around ten people at a time. This scene is not that common in Delhi and NCR due to strict traffic rules. However, I have seen them fully stuffed at times in the market near my hostel. 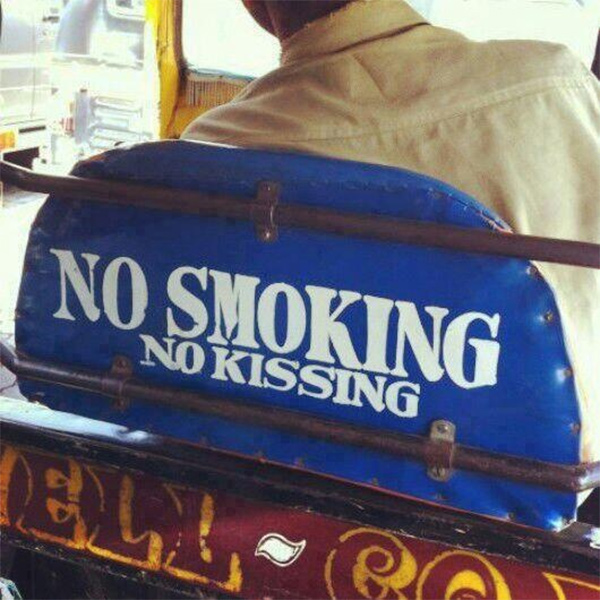 I have been travelling in autos for years, and I see a new bee in the hive almost every day. Other elderly bees would not let the new one get a passenger, for the obvious reasons that they are the seniors. But, these autowalas have their own rules which are hard to comprehend. Sometimes, they take the passengers in turns and at other times they fit as many people inside the tiny vehicle as they can, and will not let others catch the prey!

“kahan jaogi madam? Arey madam bolo naa, kahan jaogi?! (where will you go madam, hey, where will you go?!)” This is the first thing I always hear when I step out of the bus; I ignore them and find a desperately shouting autowala who is searching for one more customer to fill his already packed auto. But when you are not lucky enough to find an auto towards your destination, then you’ll be the one asking each of them if they can take you to your end. But they are sly enough to ask you a fare of all the passengers they would have carried, and you helplessly say yes! Because that’s the way our dear chaalaak autowala bhaiyas are!

“Bhaisahab tanik aage aajaiye, piche madam ko baithjane do! (Hey brother you come in the front, let madam sit there!)” This is what an autowala would say to make space for a woman, when the back seats are stuffed with male passengers. 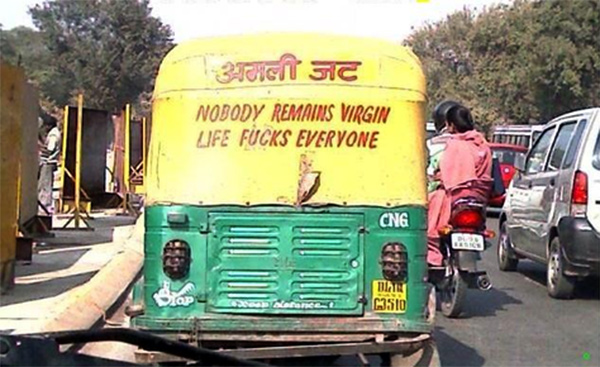 Auto Rickshaws are like the lifeline of Delhi. An autowala can take you through the 3 inch gap between two vehicles on a fully fleshed road to your destination in seconds. Sounds rubbish? Get into an auto rickshaw on the roads of Delhi or NCR and you will believe me!

Auto rickshaws are not only the best choice to travel short distances, but also the best way to advertise! From the posters of ‘Bengali baba ka churan’ to the ‘Political campaigning posters, one can find anything and everything stuck on its back. My personal favourite is, “yeh zimmedar auto rickshaw, karta hai mahilaon ka samman aur suraksha! (This responsible auto rickshaw respects women and keeps them safe!)”; it is more like a safety call for the women passengers. Any auto rickshaw is no less than a chalta-firta quotation bank! I am a big fan of these quotations myself, so when I found some on Quora, I couldn’t resist but share these pictures with you!

Sometimes, autowala can be the best advisor to most difficult situations! During the 10 minute ride, dare to ask the driver about something difficult and he may end up giving you the best advice.

Well, this was my story as a passenger. For people like me, who would love to see the world through the driver’s seat, comes the ‘Indian Auto rickshaw Challenge’. This challenge started in 2006 and is still attracting a major amount of tourists with around five challenges per year. The fun part is, you get to drive the auto rickshaw in a given route like your own taxi. You are provided with the map, fuel and everything needed to complete the whole track within the given time limits in spite of the changing weather conditions and of course, the traffic police. After a real adventure and a very long journey of about 10-15 days, when you are at the last spot, only thing you want to say is “Hoola….I did it!” And go back home proudly, because you drove India’s best vehicle travelling through the heart of South India…