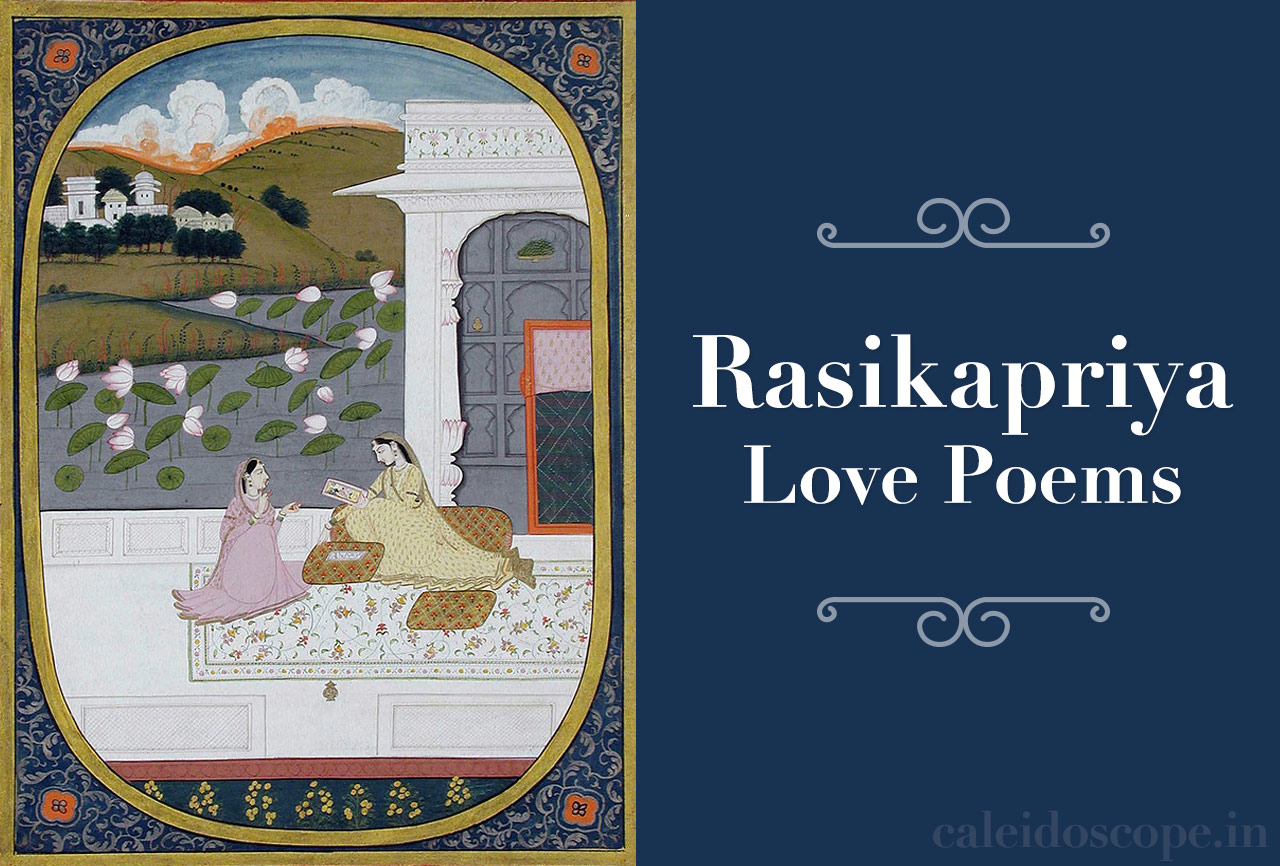 #Didyouknow that in the 16th century there lived in Orchha, in present day Madhya Pradesh, India a poet with the most colourful mind when it came to the nuances and delights of expressed love? And that he created a classic called Rasikapriya which was illustrated by many schools of Rajput miniature painting? He was none other than Keshavdas Mishra. He composed the ‘Rasikapriya’ which has been called The Lovers Breviary and The Connoisseurs Delight. It was written for the cultured aesthete. Let us look at aspects of his poetry in this famous pioneering work and some delightful illustrations made in Rajput ateliers during the 16th to the early 19th century.

Keshavdas Mishra was born in circa 1555 into a Sanadhya Brahmin family near Orchha at Tikamgarh. He had scholars in his ancestry who had worked for the royal Tomars in Delhi and Gwalior and he was well exposed to Sanskrit as a child. In fact, even his grandfather and father had been attached to the Orchha court as scholars. However, he chose to compose in Braj ‘bhasha’ (language), though he followed the Sanskrit tradition. The Bhakti movement had elevated the level of Braj ‘bhasha’ and he composed his poems in this language.

The poetry of Keshavdas is in ritikavya i.e mannered poetry. He was the pioneer of the Ritikaal of Hindi literature. He was mostly attached to the court of Orchha as a scholar and advisor during his life. His first patron was Chandrasen, Son of Maldev of Jodhpur who ruled from the principality of Sevana. However, Keshavdas was mostly associated with the court of Orchha like his ancestors. Rasikapriya was composed by him in the Braj language in 1591 A.D, a vernacular style of Hindi spoken in mostly North India of yore; the work was inspired by Raja Indrajit Singh, a patron of literature, the brother of Raja Ramshah of Orchha. In 1608, Keshavdas joined the court of Vir Singh Deo for whom he composed separately. His major works include Ratan Bawani (1581), Rasikapriya (1591), Ramachandrika (1600), Rakhshikh (1600), Kavipriya (1601), Chhandamala (1602), Virsingh Dev charit (1607) and Jahangirdas Chandrika (1612). His poetry has rasa (essence), alankara (ornament) and chanda (metre). He was called acharya (master) and guided other poets in his lifetime.

His most acclaimed work is Rasikapriya which covers all the aspects of love, underlined by the Bhakti philosophy of Vaishnavism, also wherein he has highly praised the river Betwa and the land of Orchha. He passed away in circa 1617.

The poems are composed in 16 chapters called prabhavas, based on different aspects of Shringara, like love in longing, love in separation, love in belonging, types of nayakas and nayikas, romantic gestures, meeting places or rendezvous points, offended nayikas and lonesome nayakas. There is also section in the chapters on the ‘sakhi’.  The ‘sakhi’ here is not the cowherd maiden or ‘gopi’ with Radha. She belongs to a lower rung of society and is a ‘love messenger’ who moves between the nayak and nayika. She has been captured in the paintings of Rasikapriya as well. Her role is very important in the realm of love portrayed by Keshavdas. He describes nature; foliage, birds, trees in his work as they from the backdrop in many of the situations captured in his poems. He used proverbs and folk idioms as well to highlight his poetry. In Rasikapriya Krishna is the nayaka or hero in a courtly ambience and Radha is his heroine who is a sophisticated nayika who takes on many forms. In Rasikpriya Krishna is shown as more human than divine, more royal than pastoral, like a princely character. He is closer to real life, emotions like love and hate. Keshavdas manages to move easily between the pastoral Krishna and the courtly prince nayaka.  The love story of Radha and Krishna is portrayed in Rasikapriya (and few other ritikaal works) which became quite popular. In Rasikpriya there was a shift from the groves of Vrindavan to the Rajput courts and havelis (mansions) where the divine lovers Radha-Krishna are depicted. This also resulted in the creation of delightful and captivating artworks of Krishna in the Rajput court and in Rajput costume.

Keshavdas’ poetry in the Rasikpriya was well adapted by the ateliers of the Rajput Schools of miniature painting, like Mewar, Malwa, Bundi, Kishangarh and the Pahari school of Kangra. The paintings depict the many situations in love in this iconic work with the nayaka, nayika and the sakhi.

Let us see some illustrations to the Rasikapriya made by different Schools set in nature and a courtly ambience and delight in the painted poetry of the Rasikapriya.

Illustration – Radha looks at the picture of Krishna

In this painting, a forlorn Radha is looking at the picture of Krishna.
The sakhi tells her –

“You need to light a lamp to dispel darkness, you cannot do it with the lustre of your body. You cannot satisfy your hunger just by seeing food. You cannot quench your thirst by listening to stories of water. O you moon faced and lotus eyed maiden, can you bring to the house by just looking at a picture of Lakshmi? By looking at the picture of your beloved you cannot have the pleasure of meeting him. This is the time to go and meet him, so do not waste your time.’’

…from the Rasikpriya, as translated by Harsha V. Dehejia

In this painting Radha has come to Krishna’s house at night braving dangers along the way. She is depicted as Abhisarika nayika, specifically Premabhisarika nayika.

‘’I am aware of your love and have conquered me as you have come uninvited.

I have come because of the dark clouds.

You must have endured a lot of hardship.

On this dark night when I cannot see my body where is the question of suffering pain?

Then how did you find your way?

Even then you must have negotiated ups and downs, moods and thorns on the way.

My gait was as easy as that of an elephant.

In this dark and foreboding night how did you come alone?

Your love was my companion along the way.’’

…from the Rasikpriya, as translated by Harsha V. Dehejia

In this painting Radha seems to be telling Krishna –

“Today your eyes are red as if painted in the colours of Mahawar. (Either you are awake all night or you fell at someone’s feet and the mahawar from the feet came into your eyes). Yes, I am in love with you and I like your eyes. I am brimming with love and anger. Tell me, your eyes are red because of longing for me or is it because you love someone else?’’

…. from the Rasikapriya, as translated by Harsha V. Dehejia.

Illustration – Radha Comes To Krishna With Her Veena

In this painting there seems to have been an altercation between Radha and Krishna and she has come to woo him with her music and come with her veena. In the upper register Radha is speaking to her confidante sakhi and two other sakhi have brought a garland for Radha.

O Krishna! People will say what you have them say. Otherwise, they would not speak ill of us. Why walk on a road where there are thorns? When people raise a finger at you then our love will dry up like a withered pumpkin. Never forget that you are me and I am you”

In this painting, Radha, the romantic heroine is in an expectant state as Utka nayika sits talking to her friend, presumably about Krishna, not knowing that he is standing behind her.

“O sakhi, do tell me, why has there been such a long delay in Krishna getting here? Do you think he has forgotten me or has someone waylaid him? Is it possible that he has missed his way and is wandering in search of me? Could someone has frightened him? Is it possible that he some other beautiful woman along the way? Or maybe he is on his way and about to reach here or come here shortly?’’

These illustrations are made as miniature paintings to a classic work, Rasikapriya by Keshavdas from the 16th century, by different Rajput Schools of painting which brings alive the situations between nayaka, nayika, the sakhi, along with sentiments and experiences of romantic love as envisaged by the poet which are universal and timeless. He has expressed the same in beautiful verse in his monumental work which will continue to enthrall readers of poetry and the paintings will enchant  art lovers for years to come.